Yesterday, the Illinois House passed SB41, which was earlier passed by the Illinois Senate. We wrote several times before about this horrid bill when it was in basically the same form as SB10. It is one of several measures that have been making their way through the legislature to give away secured, first priority claims on tax dollars to bondholders.

If signed by Governor Rauner, the bill would force municipalities that want use state money as collateral to transfer complete ownership of money flowing from state government to a new, separate entity created solely to pay bondholders. By doing that, the bill would ensure a form of mortgage that would be bulletproof even in bankruptcy.

As we put it before, the only thing worse than bankruptcy is an assetless bankruptcy. Smart, self-interested creditors get ahead of bankruptcy by “collabering up” all the assets they can with liens and mortgages, ensuring they’ll get everything when things crash. That’s what’s happening here.

Worse, the bill would bind the state to refrain from doing the very things it should already be doing — working to undo mortgages that prioritize bondholders over the public. The bill further prohibits municipalities from mortgaging their state money in any way other than the bulletproof manner created by the bill.

Yes, the bill would make borrowing at a lower cost easier. You, too, could get better terms on a loan if you transferred ownership of future income to a lender, but that would be suicidal.

Watch this video of the bill’s sponsor, Rep Barbra Flynn Currie (D-Chicago), lying about its purpose. It shows Rep. Peter Breen (R-Lombard) challenging her. The woman you hear saying “I don’t think this is intended to apply in a bankruptcy” is Currie. That’s precisely the purpose of the bill.

We can only hope Governor Rauner vetoes this and a series of similar bills coming his way.

The roll call of the vote is below. Kudos to those who opposed it. Notice that Republican House Minority Leader Jim Durkin voted for the bill. Some questions about him are becoming apparent.

UPDATED to correct the date on which the vote was held, which was yesterday, and to add the roll call below. 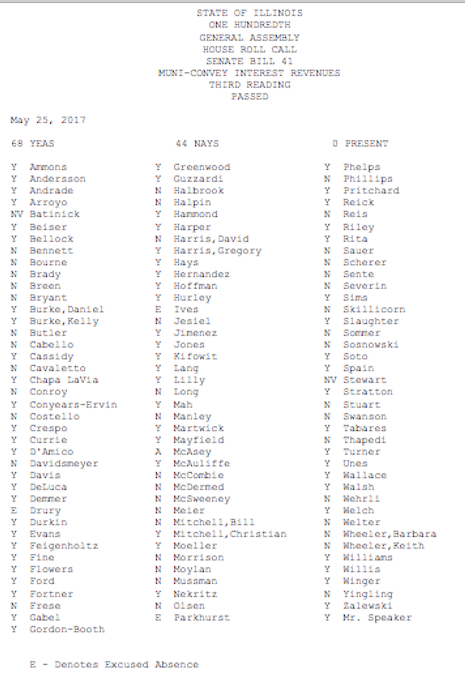 Does anybody have any specific examples of how this would occur? What would this do to the unfunded pensions or usual services (police, grade school / university educational support, grants, social services, Dept of Motor Vehicles)?

This pertains to home rule municipalities, which are all those over 25,000 population. It means the money that comes to them from the state — their share of sales taxes and a variety of other items, would have to go first to pay bonds and not towards any government services of any kind if they pledged those funds towards the bonds and those funds were needed to pay the bonds.

This is the equivalent of an insolvent individual cashing in bankruptcy protected personal assets (e.g. 401Ks and IRAs) and handing the proceeds to the bank the day before they file bankruptcy.

Wow the only thing these people understand is cash flow and how to keep it going, of either by taxing or borrowing. There is no fiscal structure in anything they do. It’s always just about keeping the spigot open in the here are and now. Any bad deal is ok to them as long as it supports more taxing and more borrowing.

Thank God we have Rauner as a backstop. Pledging post-bankruptcy assets to current bondholders is madness.