Wirepoints
Home WP Original Stories What if Illinois manufacturing had grown at the pace of its neighboring...
Facebook
Twitter
Linkedin
Email
Print

Illinois has struggled to recover the manufacturing job losses it experienced during the depth of the Great Recession. The state has only recouped 10,000 of the 100,000 jobs it lost since its worst moment in 2010.

In contrast, its neighboring states have fared far better since their manufacturing lows.

Michigan’s recovery has been the most remarkable. Its manufacturing sector has grown at a rate of 3.6 percent a year since its recession lows. Kentucky’s growth has come in at 2.7 percent annually. Indiana’s, 2.3 percent.

Illinois’ manufacturing recovery has been paltry. It’s grown at a mere 0.3 percent annually.

How many more manufacturing jobs would Illinois have today if it had simply kept pace with its neighbors?

Nearly 147,000 more jobs if it had followed the same recovery path as Michigan.

102,000 more jobs if it had mirrored Kentucky’s recovery.

Even 24,000 more jobs if it had mimicked Iowa – the state with the second-worst recovery after Illinois. 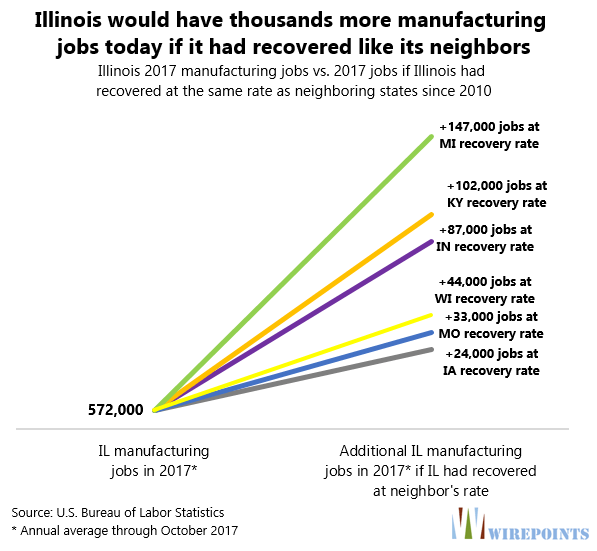 Michigan and Kentucky now have the same number of manufacturing jobs or more than they had in October 2007, just before the Great Recession. Indiana and Wisconsin are not far behind.

All of Illinois’ neighbors have grown significantly since their collapse during the recession. Even Missouri has managed to surpass Illinois with its constant growth.

Illinois, meanwhile, has just 86 percent of the total manufacturing jobs it had in pre-recession 2007. 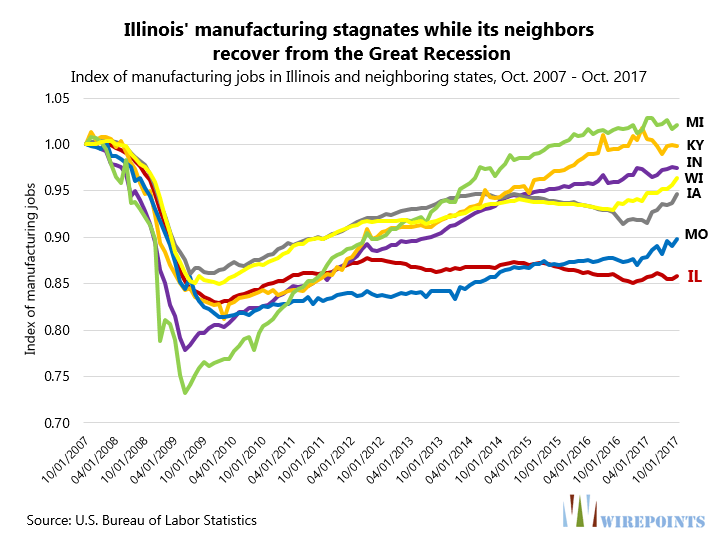 Illinois’ anti-business atmosphere likely has a great deal to do with its lackluster manufacturing recovery.

Illinois has restrictive labor rules compared to its neighbors and to many states across the country. Its workers comp costs are the 7th-highest in the nation. And companies have to deal with one of the highest tax burdens in the country, including the nation’s highest property taxes.

Illinois lawmakers have done little to reform any of that since the Great Recession.

In comparison, Illinois’ neighbors have passed numerous pro-business reforms since 2008. Indiana, Kentucky, Michigan, Wisconsin and Missouri have all passed right-to-work laws. Indiana enacted a major tax cut in 2013. And Iowa is considering sweeping changes to its collective bargaining rules.

Politicians in Springfield should take a page out of every neighboring state’s playbook. Illinois needs labor and workers comp reforms, at the very least, to make it more business-friendly.