Pop quiz: 176 billion is the difference between Wisconsin and Illinois by what measure?

No, no, no. it’s not the ten-year point total by which the Packers beat the Bears.

It’s the ten-year difference between the State of Wisconsin’s net income and the State of Illinois’ net loss.

That’s from each state’s CAFR, the annual reports based on audited, accrual-based financial statements of actual results, not on meaningless cash-based budget numbers. It’s called the “total primary change in net position,” which is comparable to changes in net worth – gain or loss – in private sector financial statements. The chart below shows the comparison based on 2019 CAFRs, which is the most recent year published for Illinois. 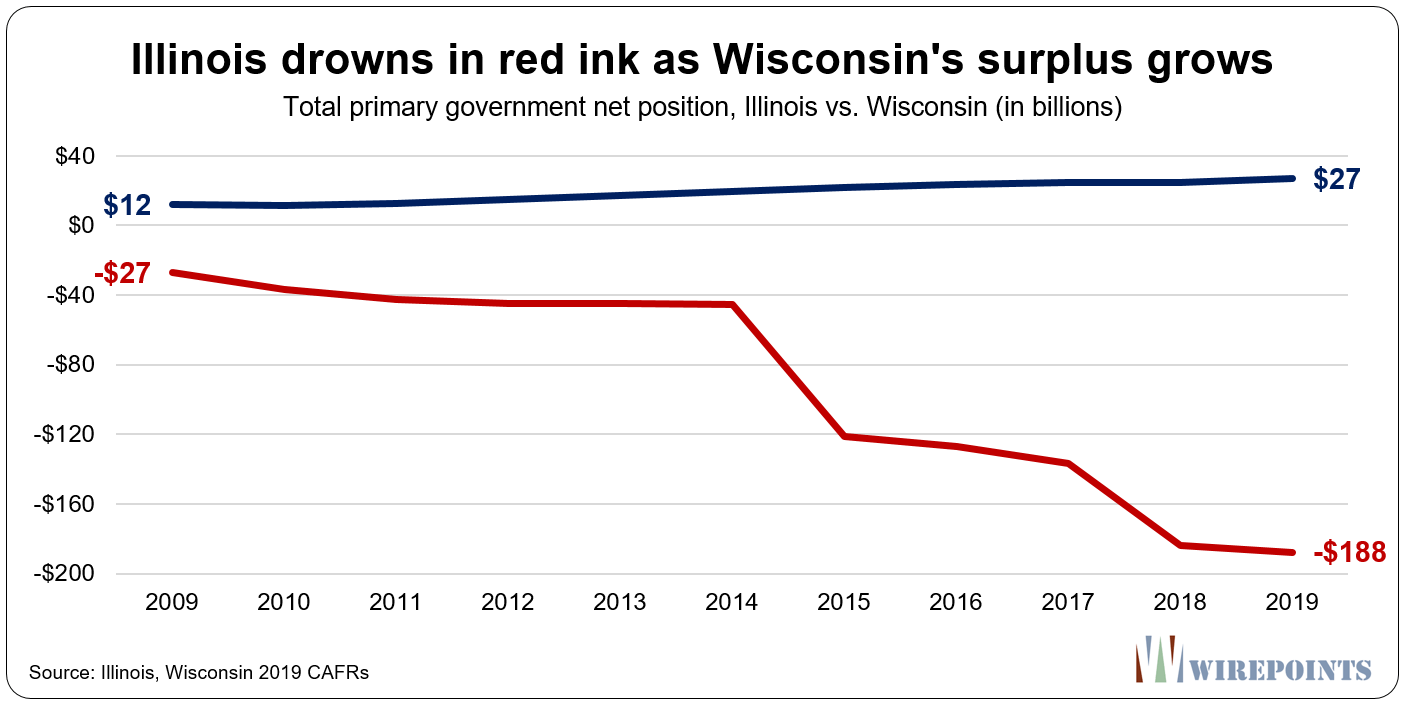 And as if to spike the ball, Wisconsin recently released its 2020 CAFR showing that it again improved its net position, this time by $120 million. (Illinois’ 2020 CAFR is not published yet.) 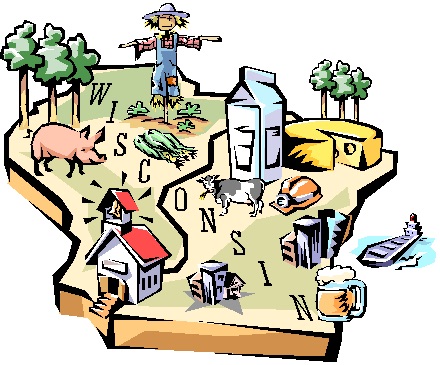 That’s a small number but still a remarkable achievement for 2020 since the fiscal year ran through June 30, which included part of the pandemic that seriously reduced income of most states.

Wisconsin also managed to contribute an additional $105 million to what is now a $761 million “rainy day fund.” Illinois has none. And it kept its state pension 100% funded. That pension covers all state and most local workers in Wisconsin outside of Milwaukee. The state has just four public pensions compared to Illinois’ 667.

One real estate market I follow is the area around Lake Geneva in southeastern Wisconsin. There’s almost no inventory for sale. It has all been snapped up, mostly, it seems, by Chicagoans.

OK, I understand that Illinois has fiscal problems and Wisconsin does not. But per capita personal income in Illinois is roughly 10% higher than in Wisconsin, and the cost of living index in Illinois is lower than in Wisconsin. So the extra taxes Illinoisans will have to pay over the next 25 years to pay accumulated debt notwithstanding, the standard of living of the average Illinoisan will still be higher. Y’all remind me of a phrase Spiro Agnew once used in reference to the news media of the day – nattering nabobs of negativity.

And all those people who paid off their college loans will soon be proven to be chumps.

I Know Wisconsin-I’ve been in Wisconsin and Illinois-You are no Wisconsin!

All mostly thanks to Scott Walker, who was attacked and vilified by Democrats and public employee unions constantly and then lost re-election due to fraud. Sound familiar?

Much like the last few stimulus packages it itsn’t going to be fair. Any bailout of Illinois/Chicago, partial or all, will be included in a bill with literally thousands of discrete appropriations. Is it likely that Illinois/Chicago will get more than a “fair” share than Wisconsin? Of course. Is this rewarding bad behavior? Of course. If there are strings attached or conditions to be met, those will be toothless and for show. The money still spends, and until it doesn’t, it will be a gift for Ill/Chicago taxpayers and homeowners. Democraic payback. As far as the Federal government is concerned,… Read more »

Your saying fed bailouts will be based on some criteria other than on a “per population” bases? I thought whats been proposed saw far was to distribute fed funds based on population? Or maybe im wrong? Sure will be interesting scammary whatever happens

The Dem’s earlier huge trillion dollar bill was not based just on population but had a formula that included other things with bailouts disproportionately large for states not in bad shape in an apparent attempt to buy them off.

If thats the case, even more of a reason to make a run for the border.

Wisconsin will be rewarded by Biden and the Democrats for their frugality and financial competence with a massive tax hike to bail-out wild spending Democrat States and Cities. Disgusting.

What will Illinoisans think when the fed bailout or bailouts funds start rolling in and a debt free Wisconsin is able to use its fed funds to load up its rainy day fund or expand services or possibly cut taxes? While Illinois is forced to use its fed funds to directly or indirectly pay off the debts of the past (i.e. for Tier-I pension millionares), even if fed funds come with restrictions to be spent on covid relief only. Or will a dullard Illinois public even notice?

“Dullard” perfectly encapsulates what we have here! 🙂

I know a couple who bought a house in Lake Geneva in 1995 and opened a small pack and ship service business in town. They get a constant flow of shoppers visiting from Illinois wanting to ship stuff home. Perfect timing for them I’m sure.

I wonder if they advise all the shoppers of the “Personal Use” tax that Illinoisans are supposed to pay on personal items purchased outside of Illinois and brought home.

Most people are unaware of that requirement. You’re supposed to self-file it on the honor system.

The Wisconsin economy is improving everyday due to Illinoisans who live near or a reasonable distance away are going there for meals, gas, and higher end products due to the 5% tax rate. We are lucky, 5 minute drive and the restaurant and bar parking lots are full of Illinois plates. JB and the rest of the demoncrat hustlers are clueless.

I remember when Scott Walker and the Wisconsin state legislature enacted these reforms. The Democrats up there actually fled the state to Chicago for a while so that they couldn’t have a quorum to pass the reforms. Then, their public employee unions (mostly teachers) flooded their state capitol (an insurrection? a threat to democracy?) and screamed about it for many days. Then it all got passed. After that, Wisconsin steadily improved and became a fiscally sound state. Prior to the reforms, I recall Wisconsin being in bad shape, like Illinois. The public unions eventually got their way, and Scott Walker… Read more »

Amen. Or Awoman. Whatever.

“The public unions eventually got their way, and Scott Walker was run out of town.” Walker was winning the race late into the night (or by some counts, roughly 1,000 votes down out of 2.4 million cast)….until…you already know…late night ballot dumps out of Milwaukee where Evers received 38,674 votes to Walker’s 7,181, just enough to bring Evers over the finish line, by just over 25,000 votes. Amazing how that seems to happen every time in the era of Orange Man Bad, right? How do unelected bureaucrats keep counting enough votes until the D wins by an ever so slim… Read more »

Youre a ” racist” for even suggesting such a thing!-lol

I believe that election fraud is much bigger than people realize. I think that over time there are bad elements who have discovered that there is very little punishment or accountability for manipulating an election at the grass roots level, a few votes at a time. So these people (activists and SJW’s, of course) have actively undermined elections, one local precinct by precinct. They are so rabid about politics, that I don’t think anything would hold them back from cheating — because, you know — they have the “moral high ground” to do what it takes. Why is it that… Read more »

It’s certainly gotten more brazen in the Trump era. In earlier times they could probably push one D candidate over another in the primaries. But these days it seems practically made to order for the general election. If only there was someone, somewhere, looking into these seemingly brazen vote dumps for certain candidates late into the night. But god forbid you make the suggestion that maybe, just maybe, there should be a little more transparency from the late night vote counts by the unionized Democrat vote counters in the basement of a county building controlled entirely by Democrats. You are… Read more »

Exactly right. All of this nonsense in Washington would have been avoided had SOMEONE taken a hard look at the voting “irregularities” and released a comprehensive, thorough report on it. They stormed the Capitol because no one is listening to them. “You are a threat to democracy” they are told. That’s not going to solve this. Every body, whether legislative or judicial, told us almost immediately that we should move on and not bother with even looking at it. Most of the court cases were not dismissed due to evidence, but on procedural grounds and jurisdiction. Why not look into… Read more »

ABOUT US
© Wirepoints Corp. 2012 - 2020. All rights reserved.
Contact us: admin@wirepoints.org
FOLLOW US
wpDiscuz
24
0
Would love your thoughts, please comment.x
()
x
| Reply