Getting a head start in a race doesn’t help much if five out of six other runners get the same head start. Yet that’s how it works for Chicago’s set-aside programs for minorities, women and others.

Eighty-five percent of Chicagoans are in favored categories getting preference in city contracting.

Here are the numbers:

According to the most recent census figures, 33% off Chicago is non-Hispanic white. Other ethnic groups get preferential treatment under the set-aside program for city contracts.

Women, too, get contract set-asides. Since half of that 33% is female, that takes the portion of the population not eligible for set-asides – white males – down to about 16.5%. 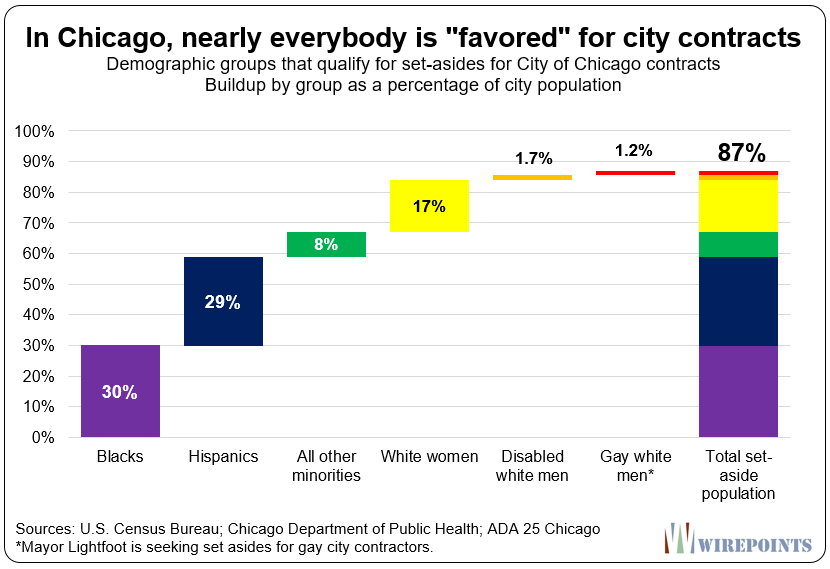 There’s further to go. Set-asides also prefer the disabled. Chicago says 23% of its population reports having a disability, though ADA 25 Chicago, an advocacy group, puts the number lower at 10.9%.  Even using the lower number takes the portion of Chicagoans who can’t get a set-aside below 15% — white guys with no disability. Preferences go to the other 85%.

Now Mayor Lori Lightfoot wants to create a set-aside for gay city contractors in addition to existing earmarks, as reported by the Chicago Sun-Times last week. An earlier study found that about 7.5% of the city’s adult population identifies as gay. If they were given a set-aside, only 13.6% of the population – straight, white, males with no handicap — would be left without access to a set-aside. In other words, over 86% of Chicagoans would be entitled to preferential treatment when bidding for city contracts.

However, the city’s gay population isn’t on board, as the Sun-Times reported. Some apparently see that the whole system is getting crazy. “The fact that the LGBT community has been discriminated against for decades does warrant a conversation. But I just don’t understand how [Lightfoot] can ensure that it’s not taking away from others who have also been disenfranchised.” That’s from Chicago Alderman Ray Lopez, a Gay Caucus member.

For now, the numbers above arguably overstate part of the issue because bidding for contracts isn’t limited to city residents and the white population elsewhere is much higher than in Chicago. That is, minority bidders compete against bidders from other places where the portion of whites is higher.

That’s changing, however. Demographers say it’s about twenty-five years until the nation’s non-Hispanic white population shrinks to 49%. The fact remains, however, that the portion of Chicagoans from whom set-asides are taken is mighty small.

Special status for 85% isn’t the only thing wrong with Chicago’s set-aside program. For starters, it’s a racket for some white males. The Sun-Times stated what everybody in Chicago knows: “Over the years, Chicago has seen countless examples of minority business fraud. Women and minorities served as ‘fronts’ for white men.”

possible to administer rationally. What about the growing number of mixed race residents, and what do you do with those who fit into two or more preferred groups?

More fundamentally, it’s supposed to be about disadvantage, but it doesn’t accurately address disadvantage. Chicago now has many second or third generation nonwhites from middle or upper income families. It also has plenty of white males who’ve been at least as disadvantaged as many nonwhites. Maybe they grew up in broken homes or with drug addicted parents. Maybe they overcame severe health problems. Maybe they’ve been through extreme poverty and horrible schools.

And as for the members of Chicago’s preferred classes who really are disadvantaged, the preferences obviously don’t help much when the same preference goes to four out of five people in the city.

Barack Obama once called for major changes on how preferences work. He said he wanted government to craft a policy “in such a way where some of our children who are advantaged aren’t getting more favorable treatment than a poor white kid who has struggled more.”  He cited his daughters as examples of those who shouldn’t get preferences.

Who could argue with that? That was before he became president, however. He dropped the idea after taking office. Chicago went in the opposite direction with its set-aside program.

It goes back to the point Alderman Lopez raised: How can you ensure set-asides are “not taking away from others who have also been disenfranchised”?

You can’t. Not under Chicago’s set-aside program, especially when 85% of population gets automatic preference based on rigid formulas using immutable traits not necessarily reflecting disadvantage.

This article was updated to add the chart and correct the number of non-Hispanic whites in Chicago.

None of this matters because government work doesn’t require talent, ambition, risk taking, creativity, intellect, work ethics or value creation. It only requires showing up at 9 and leaving at 5 with a few hours of autocratic form filling in between. In fact government work dislikes ambition and creativity. This is precisely why government can plug and play people into positions on criteria that has nothing at all to do with talent.

Love tilting at those windmills, Rick? Of what value are any of your comments in solving the problems discussed here? Your comments are much like blind racism. Venting and nothing more. Calm down and say something–anything–to help solve problems or say nothing at all, please.

James, rather than invoking various isms, including racism – which you raised and he clearly did not – isn’t the point that smaller government likely will work to our benefit? I think the challenge with that this objective will involve outsourcing and other means to reduce pressure on the fisc – tough to do with the public sector unions. I do understand your point about not offering solutions but from a practical standpoint of radical reforms do not quickly obtain the perspective of doom may be salutary in making a decision to leave the state – a solution for many.

James has never had to deal with any level of government!

Ah so you’re in favor of hiring based on only two things… Who you know, and what color is your skin or sexual preferences? When was the last time you saw government hiring based on talent, on paid job boards like regular companies? On long searches for talent? Government jobs are used as vote bribes and voting block bribes precisely because the jobs behind them are bloated autocratic with residency requirements. Jobs like that are the ammunition of corruption. You’re obviously in favor of “impossible to get fired” jobs too.

I expect all contractors doing business in Chicago will soon be owned by gay minority women. This group probably represents less than 5% of Chicagoans, but will soon own close to 100% of the contracting firms.

Sort of no real point in set aside now…at least in Chicago.

Another chart needed. Those same geoups… but also show their average current annual income. I suspect some ” set asides” dont need the help…and their set aside status should be used.on groups still economically behind.

“According to the most recent census figures, a bit less than half of Chicago is non-Hispanic white – 49%.” This is incorrect, non-hispanic whites are 32.7%; White alone is 49.1% Regardless, this helps your position even more. What I don’t understand is who is doing all the discriminating. The city at best is 16.35% white males (one half of the 32.7% of non-hispanic whites), so apparently 16% of the population is doing all the discrimination of the other 84%. That’s a lot of discrimination for such a small group of people! How do they manage to do it? The 16.35%… Read more »

You are right. I have updated that and marked the story as updated. The numbers indeed worsen with that and only make the case stronger. Thank you.

With the current state of gender fluidity I guess anyone could declare they are gay at the time they bid for a contract, not that anyone would do that in Chicago.

You have to prove your gayness.

How you prove any of those categories is an issue. Dont foget pocahontas!!

Maybe our Affirmative Action Triple Play Mayor should stop wasting time pandering to her base and start focusing on how to shore up our pensions and our finances. The budget unveiling on October 23rd is going to get here real fast. Do you even have a clue as to what you are going to do?

The whole set asides thing is just an implied admission from the government that minorities just don’t have what it takes to compete on a level playing field.

In Chicago (also called Libtopia), can anyone guess who is discriminated against? It’s the one group that never gets favorable status. This group is evil and has caused all the world’s problems. When it speaks up, the Libtopians shun and belittle it. It still hasn’t leaned it’s place in society is to silently accept blame and not have opinions. It is totally ignored until the bills need to be paid and it has leaned it should never, ever expect a “thank you”. This group is slowly becoming extinct in Libtopia as it’s migration pattern has changed in recent years. So… Read more »

“rare middle income white, straight male,” They only live in one of three places: far N/NW side, far SW side, and Bridgeport/Canaryville. A lot of them are cops, firefighters, city workers (or orthodox religious). This is changing too though. The city has ‘diversity’ quotas and these middle class whites watching their children leave the city… I know them personally. Pretty soon Chicago will be a city full of victims without any perpetrators left to blame. Based on the anti-semtisim in the Democratic party, my guess is that the ‘victims’ will look to the last remaining white people, the handful of… Read more »

All a product of an epoch characterized by belief in unlimited resources (AKA “magic.”) For 50 years have the masses waxed in this belief. It underlies trust in our current monetary madness, in the filling of an ocean of debt, in open-borders/magic-dirt pathological trust and the embrace of enabling people in every vice, traditional or modern. IL’s politicians just promise the sheeple what the sheeple want. When this train finally reaches the break in the trestle ahead, the crash (long delayed, long awaited) will leave none of us whole. Lightfoot is the apotheosis of Steve Sailer’s “Coalition of the Fringes.”… Read more »

Lightfoot got elected because the other candidate in the run-off was a known crook. I’m still giving Lightfoot the benefit of the doubt. She’s looking at the city through the eyes of a court appointment receiver. It’s obvious from her actions that she’s trying to stabilize the city and then move on from there. She’s only been on the job a few months into her four year term. Her progressive social views are regressive but let’s see how she manages the city. I mean, if this were preckwinkle, my goodness, who knows where we’d be.