In a recent interview where I laid out Illinois’ overwhelming problems, WCIA reporter Mark Maxwell asked me if I would be willing to convince someone to move to Illinois.

Well, I could give them lots of great reasons to live here, including the same ones that attracted me when I returned to the Chicago area in 2007. The universities, Lake Michigan, the Loop, the state’s rich history and in my case, my family roots.

But if I was honest, I’d also have to tell them about the monstrous bill they’d be handed just for moving into Illinois. The state is drowning in public pension debt and anyone living here will be forced to pay that debt down over the next two to three decades. For many considering a move, that’d be reason enough to avoid this state.

It’s particularly bad in Chicago, where residents are on the hook for $150 billion in debts to public sector pensioners. That’s the amount Moody’s calculates Chicagoans owe when you add up the city debts plus their share of Cook County and state debts.

The problem is, thousands of households in the city don’t have the means to help pay down those shortfalls. About a fifth of all Chicagoans live at or below the poverty line. And nearly 50 percent of Chicago’s one million households make less than $50,000 a year.

So, if politicians go after only those with the actual means to pay down those debts – say households making $75,000 or more a year – it turns out they’re each on the hook for $393,000 in debts. 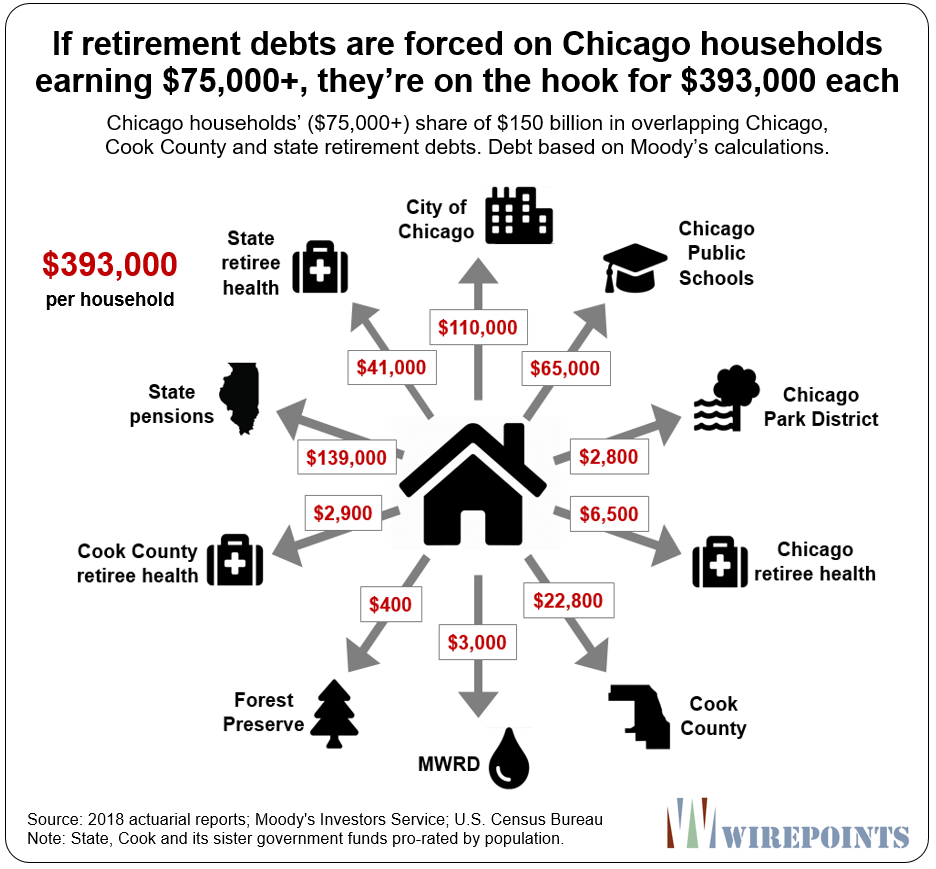 Those household debts, already insurmountable, will only get worse as more people come to realize the size of their burden. And as more people leave – and others avoid moving in – the burden on those who remain will grow larger still.

The story is the same for those living in Illinois’ Chicago suburbs and downstate. A similar calculation yields per household burdens of $175,000 (households earning $75,000 or more). Though that’s a lower number than that in Chicago, it’s still a massive burden for the residents of cities like Danville or Macomb or Carmi.

Warren Buffet summed up well Illinois’ predicament when asked about the nation’s public pension crisis. He quickly warned he wouldn’t relocate a business to a state like Illinois: “In the public sector, you know, it’s a disaster…If I were relocating into some state that had a huge unfunded pension plan, I’m walking into liabilities…And those are big numbers, really big numbers…And when you see what they would have to do – I say to myself, “Why do I wanna build a plant there that has to sit there for 30 or 40 years?”

I’m waiting for the day I can tell Mark Maxwell and others that Illinois is once again a destination state. But that’s not going to happen until Illinois lawmakers finally address the pension crisis, roll back oppressive collective bargaining laws, root out corruption and eliminate unnecessary mandates on local governments. 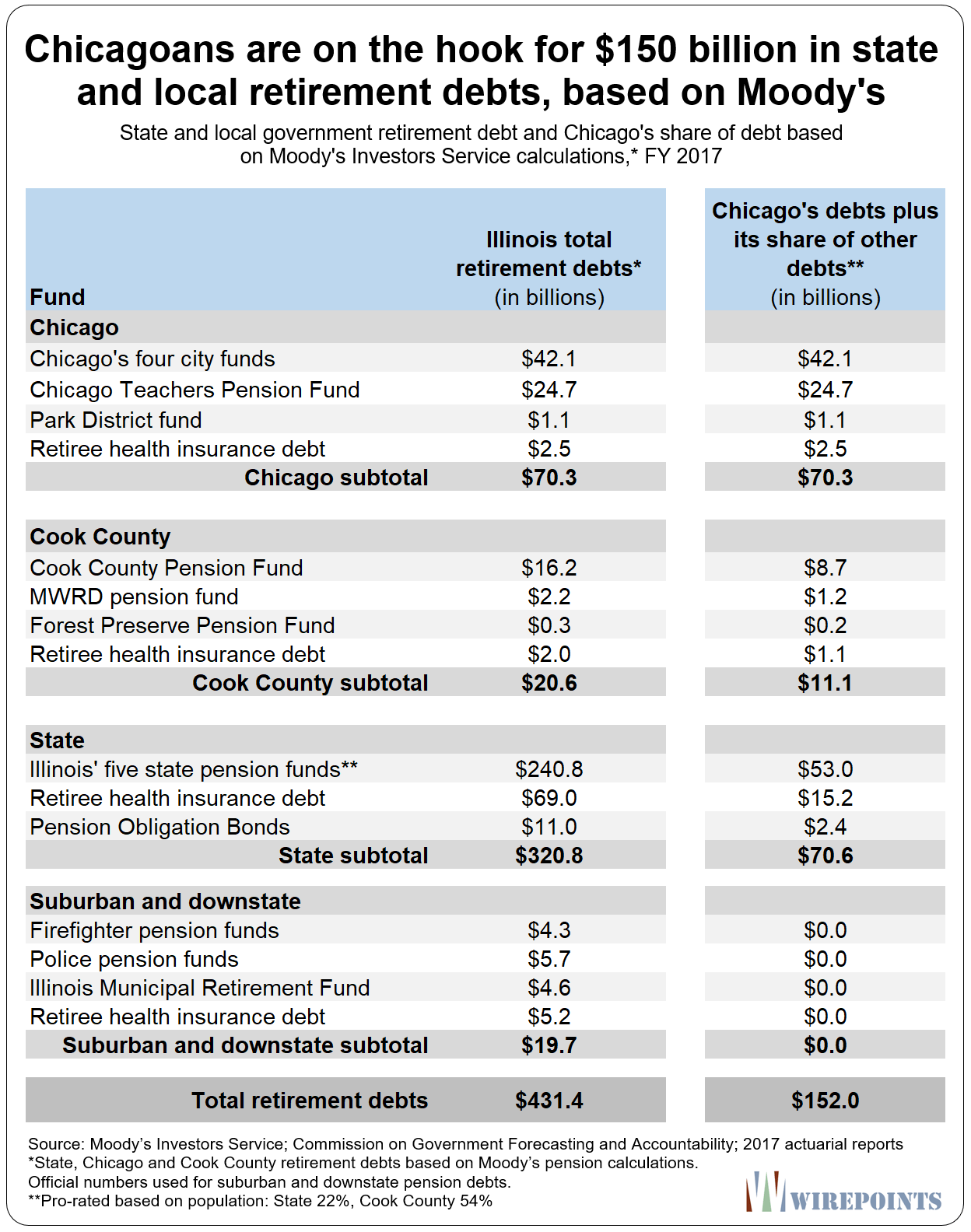 Kiss Illinois Good Bye before it eats you alive.
There is NO HOPE, the greed of the cops, firemen and teachers has destroyed the quality of living for a normal honest hard working taxpayer.
Illinois “Land of Slavery”

2
never tell anyone you are from Chicago

The charted estimates are from 2018 and are lower than the actual numbers; we have just suffered through a covidemic that will add even more expense after tax adjustments to businesses and lost revenue due to tourism and convention business that has all but disappeared; did I mention rioting and looting? The public payroll keeps on rolling, no cost cutting measures to cut into the additional debt; alas, the phantom casino rolls into the city to save us. Spare us the details, we have heard it all before, and if the police and fire departments ever wise up to fight… Read more »

If you can afford a tank of gas, filler up and leave ASAP.
The best day of your life and your families life is the day you KISS ILLINOIS GOOD BYE.
Getting rid of herpes will be easier than selling a home in Illinois.
Illinois “Land Of Slavery”

So, If right now today Illinois, Chicago and Cook County raised taxes right to pay for this debt, and spread it out over the next 20 years, would taxpayers be on the hook for: 12 months/year x 20 years = 240 months. $393,000/240 months = $1637.50/month in additional taxes until 2040. On top of your current mortgage, on top of your current property taxes and on top of all other taxes? And on top of whatever additional tax hikes occur in the meantime for more government free stuff programs. Is this math correct? Or is there an amortization multiplier to… Read more »

People will just start walking away, foreclosures will be up 100% Illinois is already on its death cycle

Oops, the state constitutional requirement for a balanced budget has a pension and retiree healthcare debt loophole.

We just fled Chicago’s North Shore for Nashville, TN. Low property taxes and no income tax are too good to pass up for recent empty nesters. The tax savings will certainly boost our retirement nest egg over the next 10 years!

So Steve, did you take a huge hit on the sale price?? Did buyer drive a hard bargain? Just wondering as I don’t want to be one of the people left holding the bag and am seriously starting to look even though I have 20+ working years left…. We have family here, but that only goes so far. I have to worry about my retirement before I help fund someone else’s.

That’s why joining the exodus to Indiana now is best. The longer you wait the worse off you’ll be.
Oh and Nashville is raising taxes too.

The sooner you get out the better life begins.
Do not waste your life away in Illinois.
Illinois “Land of Slavery”

Not to worry; the federal helicopter will fly over the state house in Springfield after the election. And life will continue for our privileged class as it always has.

How to communicate this problem (and the corruption that got us here) is a challenge. To clarify, how do you define pension debt? Is this what’s been borrowed to pay employer contributions? Is it what’s owed to meet actuarial recommendations? Is this prospective? Is this what’s due based on current number of annuitants plus current annual employer contributions plus what employers are behind on? Sorry for all the questions, but I’m trying to find another way to communicate this to the world.

Chicago taxpayers are short $150 billion right now. Bernie Madoff was short $65B. They are both Ponzi schemes. That’s the basic problem. Beyond that. $150B is: 1) the unfunded pension liabilities plus the unfunded retiree healthcare liabilities. 2) the proportional share only for Chicago households and thus excludes suburban Cook County or the other 101 counties. The $150B is what a layperson would call pension debt. It is money that should be in the investment accounts right now, but is not. Technical types will disagree with the use of “pension debt”, “should be” and “right now” but they can’t explain… Read more »

Mike, Just one question. Are the numbers you stated based on a 100% fully funded pension like IMRF (Illinois Municipal Retirement Fund) or the pension funds that politicians changed laws so they could borrow against the funds for their own pet projects?
Thanks.

What we pay in property tax’s in Rockford in 24 years equals the purchase price of the home. It was 22 years a while back so anyone buying a home here pays for 2.25 homes in a 30 year period. In Colorado it would take 166 years of tax’s to equal purchase price. No wonder people have little or no equity. In Boulder average home value is approx $800K so it is unaffordable if you move from here to there.

You know, I might not be the sharpest tool in the shed, but I’m not sure I like that deal *chuckle*

Great analysis, by the way.

Wow! A sobering article about the debt. However, the last straw is a Governor and Legislature that are convinced Illinois biggest problem is that taxes have been to low for to long, and they have zero interest in containing spending.

Yeah, it’s bad. But people in Illinois keep electing the same Democrats so I guess this mess isn’t so bad to the majority? I mean, just look at Chicago and all you can conclude is that voters don’t care about these problems like debt, budgets, education, or violent crime.

Could it be that the ones that keep voting them in are the ones that don’t pay taxes and live off of we the taxpayers? I’m beginning to think there are more takers than givers in Illinois. Idk 😐

The largest employers in the Chicago metro area are government at all levels, public school teachers and the post office. Take them and their family and friends and you get the same politicians elected over and over again to keep the gravy train rolling.

I think the events of 2020 have made Chicago (and other large cities) less likely of attracting new residents. It would take a extremely generous job offer to lure anyone to the Chicago area. A common expression is, “Don’t get mad, get even.” All of you residing in Illinois (especially Chicago) paying for an insanely large, eternally corrupt, public union kissing government can still get even. Illinois has run up a monstrous debt that it expects you to pay. The thing is, you don’t have to pay it. When they send the bill to your home, don’t be there. Be… Read more »

September 29, 2020
Ted was on Univision warning Illinoisans about the negative impacts of tax hikes like the progressive income tax. He warned that giving billions more to the most corrupt politicians in the nation would only make things worse.
View Comments (2) | Add Comment