A tweet foreshadowing the deepening pension crisis in Cook County got plenty of attention recently. It showed that by 2019 there’ll be more beneficiaries drawing pensions from the Cook County pension fund than active workers putting money into it. It doesn’t take a rocket scientist to figure out that’s not good news for active workers, especially the younger ones.

And with the pension plan just 57 percent funded, there’s a major risk the plan may go broke in the future. You can’t blame current county workers for thinking it all sounds too much like a Ponzi scheme.

But it’s not just Cook County employees who need to be worried. The same thing is happening across the state.

Police and firefighters across Illinois’ 653 public safety pension funds have similar concerns. Not only are the majority of those plans very poorly funded – some are already effectively bankrupt – but many already have more beneficiaries than active employees.

Today, 118 fire funds already have more pension beneficiaries than active workers, according to 2016 data from the Illinois Department of Insurance. Another 73 police funds are in the same dire position.

And by 2021, when all the funds are taken collectively, it’s likely there’ll be more beneficiaries than active workers if current trends continue. 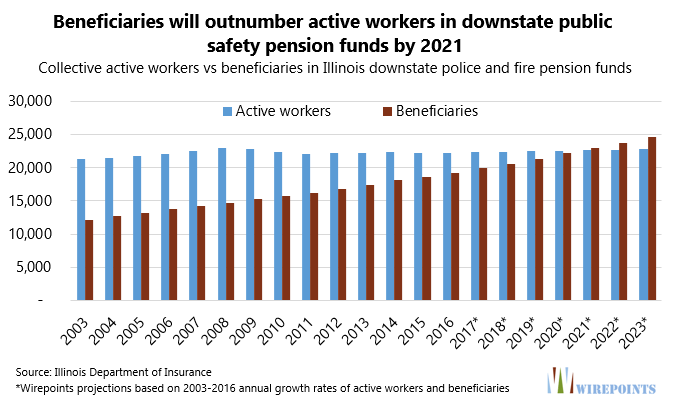 Some of the worst-off cities include Alton, Danville, Moline, Oak Park, North Riverside and Cairo. And East St. Louis is particularly bad. Its police and fire funds collectively have 76 percent more beneficiaries than active workers (96 actives vs 169 beneficiaries).

Of course, the ratio of active workers to beneficiaries is just one measure of a fund’s health. But it is an omen of things to come, barring major pension reforms from Springfield.

Illinois’ public safety funds can’t withstand more stress. Over 30% of downstate pension funds have less than half the money they need on hand today to pay out future benefits.

And there are over 25 pension funds that are less than 25% funded. 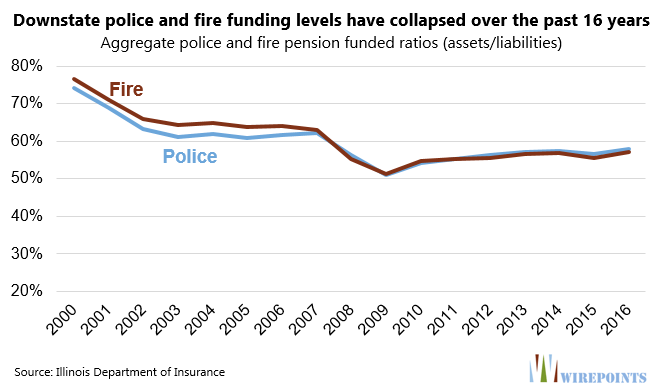 For some cities, a move to 401ks and decades of belt tightening might work to stabilize and eventually fix their finances.

But with so much mess, the days for structural pension reform have probably passed too many cities by. For those communities, bankruptcy might be the only option that can both protect retirees and allow cities to reorganize their debts.

The ones who are going to pay the price are current employees, especially younger employees, but ANY employee currently employed, and those who have recently retired, because EVERYONE is going to be taking a haircut. It is simple math. The closer we/they get to the day of reckoning, haircut day, the more desperate the current employees and retirees will become. Then when it does hit the fan it will be all hands on deck from the public unions with the same old same old talking points. There is NO free lunch. These public employees will take haircuts, but even with… Read more »

But it’s their money, they faithfully contributed to their pensions for 20-30 years, blah blah blah.

Conceptually it’s not the ratio of Retirees to Actives that matter …at ALL … if the Plan operated “properly”, because a PROPERLY administered DB pension Plan has fully funded the pension associated with each retired employee by the point that he/she retires. And for those who then jump on the Union bandwagon saying ……… see, is the “lack of full funding” that is the CAUSE of the pension crisis, no, it’s not. The ROOT CAUSE of the pension crisis is not he “lack of full funding”, but the ludicrously excessive pensions that have been promised our PUBLIC Sector workers, ROUTINELY… Read more »

“Tough Love” is absolutely right. Pensions should NOT employ a Social Security type of pyramid funding. When a public employee retires their portion of the fund should be 100% funded with contingencies in place to ensure sustainability. Unfortunately, both public sector employee groups/unions and elected officials enabled the circumstances that created this impending disaster while management failed their fiduciary responsibility to taxpayers out of fear of drawing the wrath of employees and elected officials. If you rightfully believe public pension funding is in crisis mode just wait until the next economic recession arrives. And trying to tax your way out… Read more »

great writing, since the state bailed out cps/ctu pensions, i can only see that opening another can worms where all the other underwater municipal pension demand equal bailout by bankrupt state.