It’s truly difficult to understand how Mayor Lori Lightfoot could have said what she did in her April 1 press conference. It was crazy enough to make you think it must have been an April Fools’ jest.

With the Federal Reserve Bank predicting that unemployment may go to 32% and most of the nation shut down, Chicago now faces its most difficult financial situation since the Great Depression.

No worries, Lightfoot said. She has it all covered in her budget. Let’s go through what she said then review a few facts.

For the umpteenth time, she noted “no one revenue stream is more than 13 percent” and  all of the “economically-sensitive” revenues together total just 25 percent.

“I’m not gonna sit here and say there’s not gonna be some impact. There will be. But I think we’re very well-situated to weather this storm because we anticipated in our budget forecast for 2020 that we would experience in this year some kind of economic downturn,” she said.

“Now, nobody anticipated that it would be due to a pandemic. But we built the budget this year to be able to be responsive to that kind of worst-case scenario.”

She also ridiculed former Chicago Budget Director Paul Vallas for writing that Chicago should be adopting a “war time financial plan. She said he’s “desperate to be relevant” and probably “hasn’t touched a budget in years. He can’t be taken seriously, she said.

Let’s start with her standard line about no one revenue stream being more than 13% of total revenue. True, but they are all getting hammered by the mass shutdowns. Here are the largest sources of city revenue, from the Civic Federation: 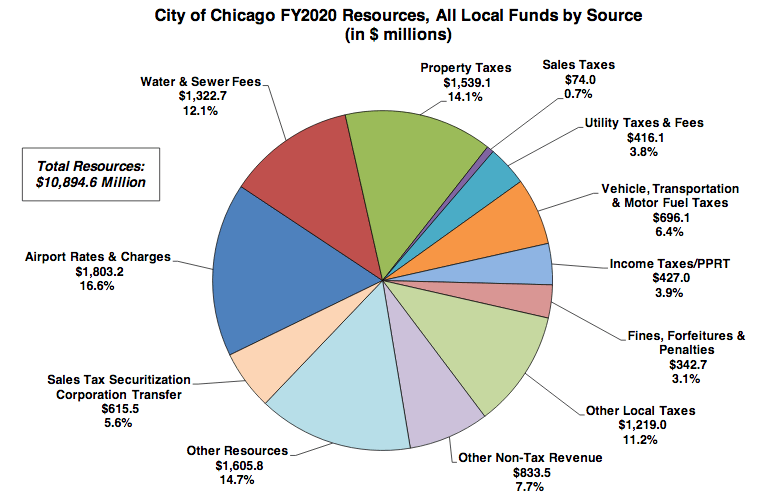 Here is what is happening to those sources including some not itemized in that chart:

•  Property taxes, usually regarded as the most stable source, were going delinquent even before the pandemic at a rate 42% above last year for reasons that the Cook County treasurer, who collects Chicago’s taxes, called “beyond human imagination.” Delinquencies will now skyrocket.

•  Sales taxes were already sold off to secure bondholders under the city’s new “securitized” bond scheme and they will plummet with so much retail now closed.

•  Income taxes the state partially shares with the city will collapse.

•  Amusement taxes of $194 million will evaporate as sporting events and theaters remain shut down.

•  Transportation taxes worth $388 million – from ride-sharing to gas to auto rentals – are disappearing as both tourists and residents restrict their travel around the city.

•  Water and sewer fees will no doubt go delinquent in overwhelming numbers as unemployment and pay cuts soar. Same for utility taxes and fees.

•  Airport rates and charges? Airlines and airports are operating at less than 10% of normal and will get by, if at all, only through the pending federal aid.

•  Motor fuel taxes? Driving has all but vanished and gasoline prices, on which the taxes are proportional, have plummeted.

Lightfoot said she built this year’s budget to be responsive to this kind of worst-case scenario.

That’s madness! Chicago was already rated, along with Detroit, as least able to deal with even an ordinary recession. There’s nothing whatsoever in the budget to cover any downturn. In fact, the budget relies on a huge, one-time revenue influx, unrealistic hopes of more revenue from a Chicago casino and higher real estate transfer taxes that Springfield has yet to authorize. Nor has the city ever offered a plan for dealing with the scheduled up-ramp in pension contributions it faces.

Paul Vallas was absolutely right to call for a war time financial plan. Lightfoot’s ad hominem response has become all too routine for her.

We cheered Lori Lightfoot for defeating The Machine, for her triumphs over personal hardship and for her genuine commitment to ethics reform, but she’s clearly incapable of dealing with this crisis. The notion that tax revenues crash when the economy crashes seems beyond her.

She has no concept of the scope of the fiscal crisis at hand.

*Mark Glennon is founder of Wirepoints

She has such hate in her eyes when she speaks. She looks so hard and unhappy. She has this deer in headlights look. Paul was right. Where is he now? Would love to hear a follow up interview with him.

Chicago is the Athens of 2020. After the 30% drop in the stock market, some of those police and fire pension funds must be two or three years from running out of cash. Or maybe a year if the DJIA continues to fall and pension funds are discounted at zero percent. I hope movie theaters are open with reduced capacity around Christmas. I really don’t want to pay $20 to see Top Gun 2 streamed to my TV.

I cannot accept what she says at face value, so I can only speculate as to what is really going on here. The first idea is that she is sandbagging this, because she is worried about the ability to borrow from the private market. Remember, her and her financial department had an “investor conference” a few months back, in which she was pitching bonds. It’s a road show designed to butter up institutional investors on the idea that Chicago is “kickin’ ass, baby!” And that all of these crazy right-wing naysayers like Mark and Ted have no idea what they’re… Read more »

When can you see a virus talking about another virus? When you see a chicago or IL politician speak about covid19…🥁ba dum tshhh. Thank you, I’ll be here all night ladies and gentlemen!

Maybe she should cut somewhere, like non-essential employees? Is there such a thing as a non essential city employee? If schools are closed, are custodians and teachers essential?

Lightfoot did defeat the machine and is not a machine politician. However, her core beliefs are entirely in line with machine mantras that: citizens exist to pay for government, business is evil, businesses and free market workers are massively overpaid and don’t pay enough taxes, that minorities are owed vast sums of money from anyone who is successful and that grossly overpaying government workers (except for police and firefighters because they don’t show enough fealty to her plus too many are white men) is how she saves her middle class. Even when Chicago is bankrupt she will try to save… Read more »

FANTASTIC!!, at what point of moral inflection for city dem machine does providing zero sarafice/ 40% making over $100gs/ & gold plated bennies for city workers to sit at home outweigh the suffering of its citizenry? Will the press ever ask?

My prediction is that the pandemic will reduce Chicago’s population further as citizens leave the city. Living in crowded, cramped diseased filled cities with lots of poor people seems really unappealing. It’s no surprise that after years of progressive virtue signaling about reusable bags, cramped public transportation, small urban condos and density, it turns out that all of these liberal lifestyle choices have been wrong. Those lifestyle choices make big crowded cities nothing more than petri dishes for spread of the wuhan virus. My decision to live in the suburbs in a modest sized home with a modest yard, with… Read more »

Mayor Lori Lightfoot go bold! Take the entire budget, run down to one of the Illinois casinos, find a roulette wheel and put it all on “Red”! Winner, winner…..burnt chicken dinner. With all the politicians trying to pull money one way or another, this might actually be a sound plan.

There is no carnage until no one will lend the city money.

November 28, 2020
Illinois has announced $2 billion more in additional borrowing from the Federal Reserve. Only one state or city in the entire country has borrowed from the facility since its inception: the state of Illinois. All others have successfully raised billions from the traditional markets during the pandemic.
View Comments (28) | Add Comment