Chicago Mayor Rahm Emanuel recently got a rhetorical beat down for proposing a $10 billion pension obligation bond, or POB. So much so that he has apparently abandoned the idea.

A POB is a bad plan in so many ways, most of all because a city can’t borrow its way out of a debt problem. It’s destined to fail, it’s a can kick and it will likely cost taxpayers more in the long run.

Which is precisely why Rochelle, Illinois, should also drop the idea of borrowing money to fund its ailing public safety pensions.

The Rochelle News-Leader recently reported that “The city is researching an option to sell bonds in the amount not to exceed $15 million to fund all or a portion of the unfunded police and fire pension funds.”

The city’s pension funds have collapsed since 2005 when they were 92 percent funded. Today, the funds have just 65 cents for every dollar they need on hand to pay out future pension benefits, according to the funds’ 2017 actuarial reports. 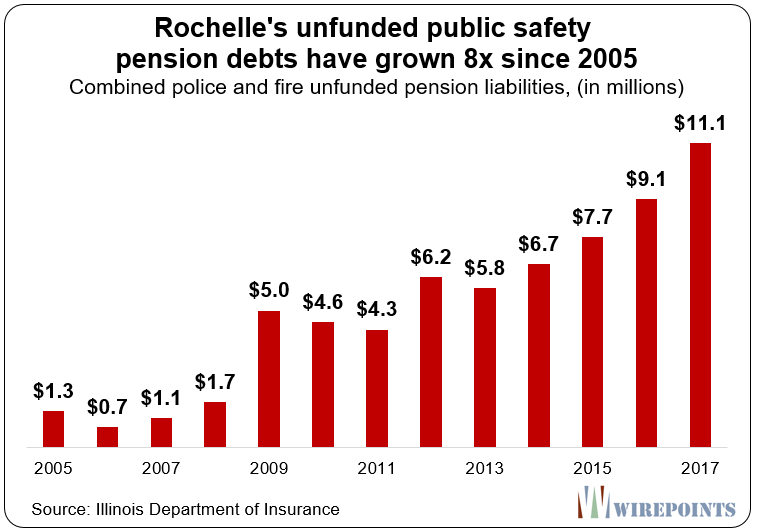 The city’s unfunded pension debt grew more than 700 percent, to over $11 million, over those 12 years.

The real problem for Rochelle is that pension promises have grown too fast. Today, Rochelle’s active and retired public safety workers are owed $32 million in total pension benefits, double the total amount emergency workers were owed in 2005. Overpromised benefits are wreaking havoc in cities across Illinois and at the state level.

That fast growth, combined with low levels of pension funding, has left the city with pension funds that are moving toward insolvency.

Like so many other cities, Rochelle officials are looking for a silver bullet for their crisis. And like so many officials before them, they think that bullet is a POB.

But additional borrowing will do nothing to fix Rochelle’s crisis. It’s not a reform. It’s why government-management organizations like the Government Finance Officers Association advise against POB’s.

In fact, POB’s have a long history of only making things worse for the governments that try them. For example, Stockton, California, Detroit, Michigan and Puerto Rico – places that eventually went bankrupt – all issued POB’s as “Hail Marys” for their own pension funds. All three POB’s lost money, hitting their taxpayers with billions in extra costs.

To further understand why POBs fail, read the below:

In addition, Rochelle has a $4,682,731 IMRF unfunded liability as of December 31, 2016 per its 2017 CAFR. It’s not common for a city’s IMRF unfunded pension liability to be almost as large as its police or fire unfunded pension liabilities. However, the City of Rochelle unit of government includes a utility named Rochelle Municipal Utilities (RMU) which also participates in IMRF and accounts for about 57% of the IMRF unfunded liability. A recurring theme on this blog is that the financial condition of local and state units of government are not adequately covered in the media. With that in… Read more »

Good work, Mike. I remember that BGA article on New Rochelle. Didn’t post it because it was so patently stupid.

POBs should be OUTLAWED. Why is it still legal for today’s politicians to enrich themselves and their union funders by indenturing tomorrow’s taxpayers?

September 28, 2020
Mark was on with Mike Flannery of Fox 32 Chicago last week discussing why reforms are needed in Illinois, not a progressive income tax.
View Comments (7) | Add Comment