It’s now easy to understand why some aldermen complained that what they received from the mayor was inadequate. The brief is super skinny for a transaction of such strategic importance. The presentation is titled “Fund Stabilization Bonds,” labeled as “Pre-Decisional” and is just six pages long. Of the five pages with information, three have static financial data on the status quo and only two contain any relevant data related to the bond offering. 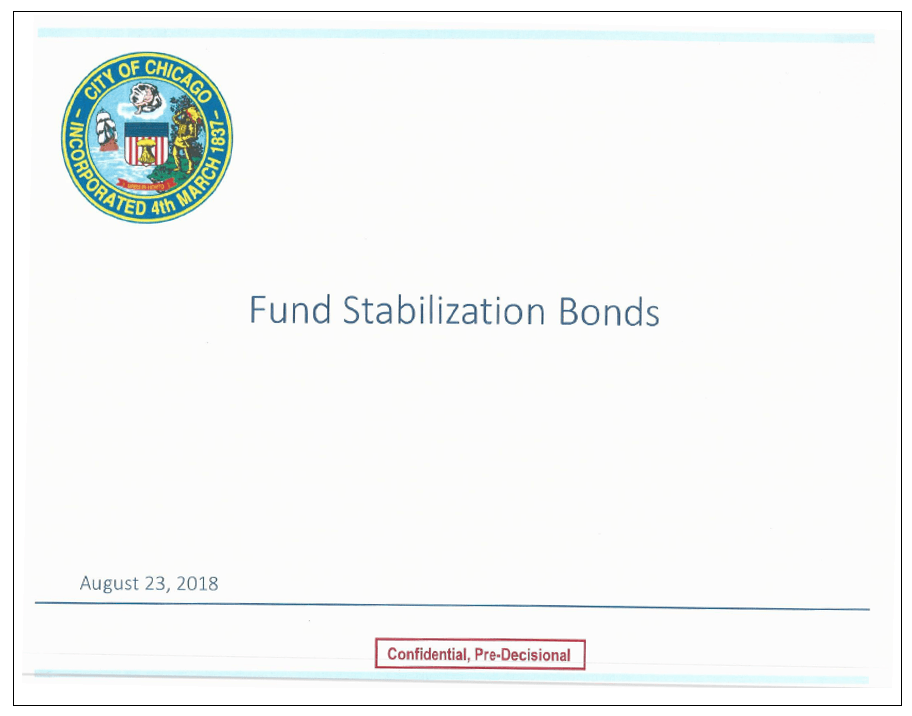 You can’t help but think that either (1) Emanuel has such a low opinion of the aldermen he expects the presentation’s limited information to convince them, or (2) the aldermen don’t mind being shown as few details as possible so they can plead ignorance if the POB fails.

Either way, it’s a misleading presentation. It presents the bond scheme as a refinancing plan with no risk. What alderman can say no to $6 billion in savings, a reduction in tax hikes, and a drop in the cost of pension debt? 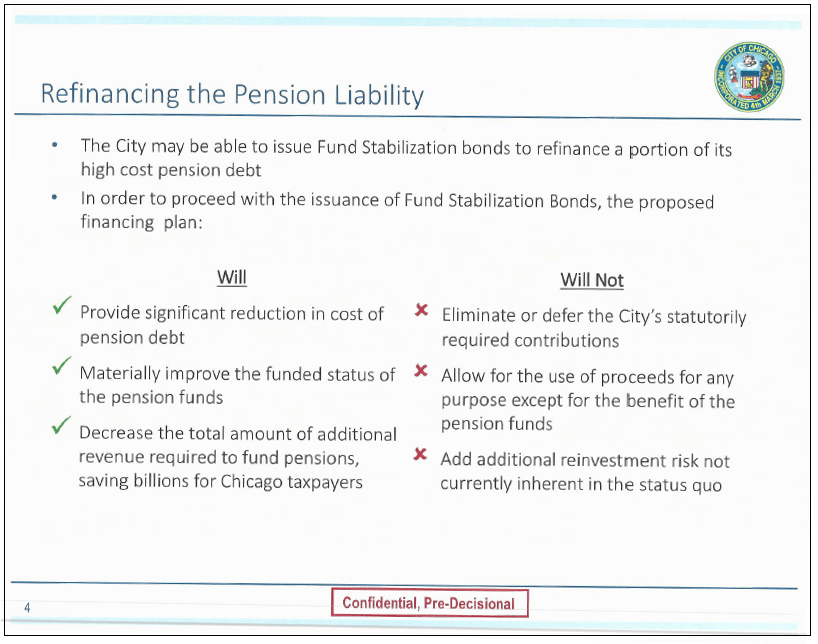 In fact, Emanuel might push for an even bigger borrowing. It’s all rather reminiscent of Rep. Robert Martwick’s (D-Chicago) reckless $107 billion pension bond proposal for the state. According to the Sun-Times:

“Last week, Chief Financial Officer Carole Brown told aldermen the city may sell even more than $10 billion in pension obligation bonds if there’s enough available city revenue to support it. Brown has not explained what the city’s fallback would be if the market tanks.”

We’ve attached Emanuel’s presentation here. There’s little to analyze and lots to critique in its omissions. No mention of the arbitrage risk. No stress tests. And no details of how the “savings” are generated.

Wirepoints also understands the aldermen received a Citibank research piece supporting the POB. That’s not surprising given the bank would be one of the lead managers of the bonds. Interestingly, the bank was openly critical of the media and other market experts that have criticised the plan.

Wirepoints will shortly release an analysis of the presentation and show aldermen what numbers they should really consider when deciding on the POB. Until then, here are the articles Wirepoints has already released on the POB plan:

Make no mistake. This isn’t a scheme that makes things better for Chicagoans. It’s a gamble with Chicagoans’ money. It kicks the can down the road with Emanuel’s latest scoop and toss proposal. It sells off part of Chicago’s future revenues. And it will delay the push for real pension reforms.

>>>(2) the aldermen don’t mind being shown as few details as possible so they can plead ignorance if the POB fails.<<<

This is madness — right now the 4 pens plans have Accd Liabs of $38B assuming 7% return on assets, but only $10B assets, thus Unfunded Accd Liabs = $28B. Just 7%/year interest on UAL is $2B which is nearly 60% of $3.6B Payroll…unaffordable. The “Presentation” shows projected Contributions next few years less than that. If they borrow $10B, then still have to pay 7% int on $18B UAL, then also (5%?) int on $10B loan, plus principal on the loan. They need to throw in the flag, it’s hopeless. Need to change the State Constitution to cut everyone’s pension,… Read more »

Suppose Rahm let the people of Chicago vote on this saying “We either cut services drastically or borrow heavily”. How do you think liberal Chicago would vote? Rahm is just a reflection of the head-in-the-sand voters and giving them what they want. He’s just doing his job. The real place for the blame is with the people of Chicago.

Dang, how did you get this? Color me impressed. The “Debt and Pensions” graphic on page 5 is laughable. They literally moved a “10” from one column to the other. High finance indeed.

Not much meat here, but the trend of bonded debt to near zero in the year…2055?!?!…will never never ever happen. As soon as one bond expires, Chicago will issue another one. This has been proven time and time again across every level of government.

whats astounding is that every major new outlet in the city isn’t all over this 6 page joke, unbelievable! my horrible 39th ward 2nd generation alderman for life-Larino is calling it quits & the ST is reporting O’Connor’s thinking of calling it quiets as well–there no dummies.

Gotta prop up the “everything’s fine utopia” at ALL costs. Spin, rinse and ignore. Bastards.