Chicagoans have no idea how much pension debt Illinois politicians have saddled them with. Officially, Windy City residents are on the hook for $70 billion in total pension shortfalls from the city and its sister governments plus a share of Cook County and state pensions.

But listen to Moody’s Investors Service, the rating agency that’s been most critical of Chicago’s finances, and you’ll get a different picture. Moody’s pegs the total pension debt burden for Chicagoans at $130 billion, nearly double the official numbers. (Yes, by chance the number is eerily similar to the official shortfall of $129 billion facing the five state-run pension funds. But don’t confuse the two.)

That’s scary news for Windy City residents. Barring real reforms, concessions from the unions or bankruptcy, Chicagoans can expect to be hit with whatever series of tax hikes politicians will try to enact to reduce that debt.

That $130 billion is the total Moody’s calculates when adding up the direct pension debt owed by the city government, Chicago Public Schools, the park district and Chicago’s share of various Cook County governments and the five state pension funds. Moody’s takes a more realistic approach to investment assumptions than the city and county governments take. 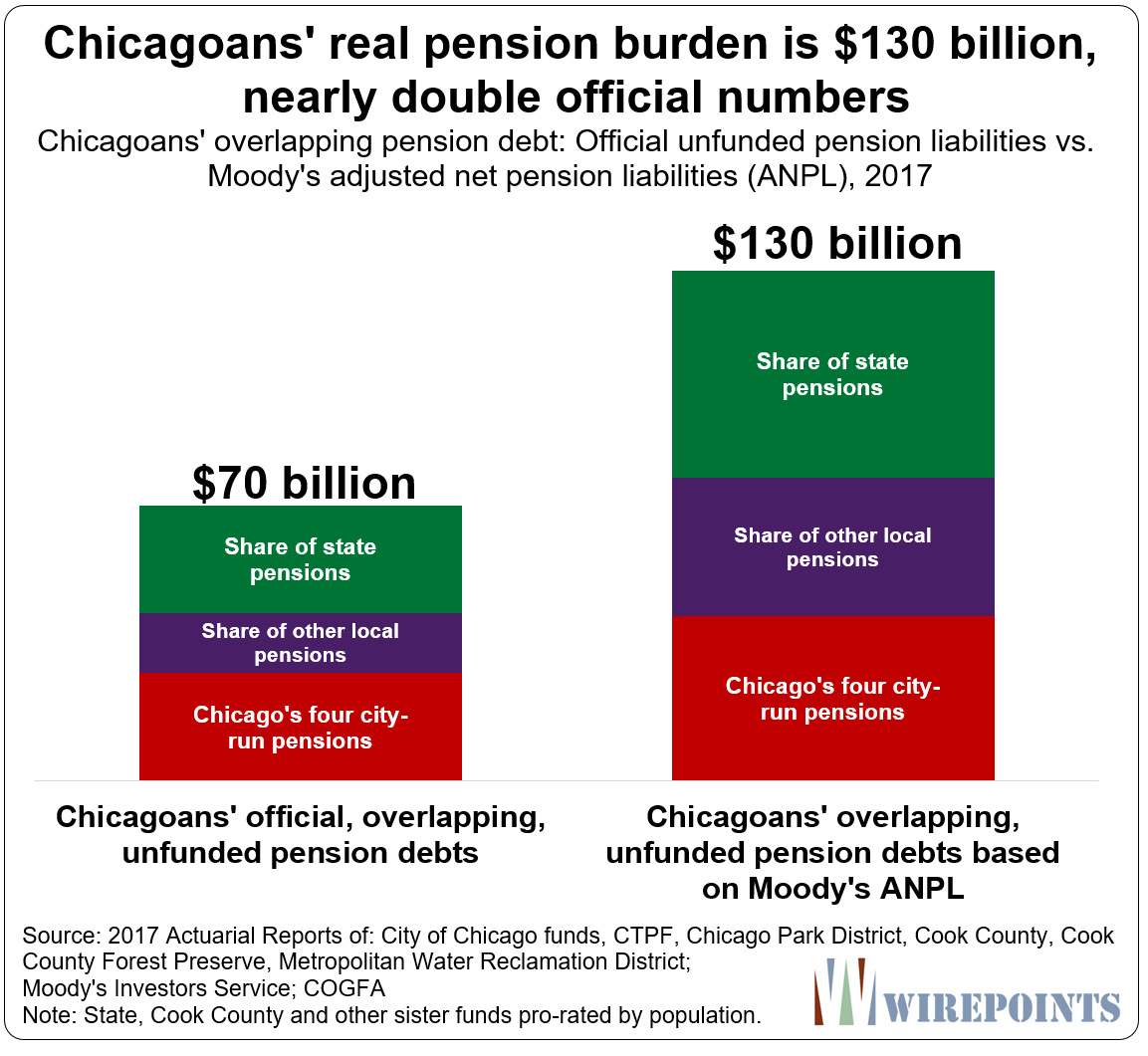 Add another $4 billion from the Chicago Park District and the city’s pro-rata share of Cook County-related pension debt. Finally, add Chicagoans’ $27 billion share of the state’s pension debt ($129 billion). In total, the official debt Chicagoans are stuck with adds up to $70 billion.

That’s over $67,000 in pension debt for each household in Chicago.

But the burden is so much higher than that. That $70 billion is based on the rosy actuarial assumptions used by the pension funds.

Other financial institutions, including Moody’s, use far more realistic assumptions to figure out the size of Chicago and the state’s pension debt. Under Moody’s calculations – what they call the Adjusted Net Pension Liability (ANPL) – Chicagoans’ pension debt burden is far bigger.

In all, Chicagoans are on the hook for $130 billion in unfunded overlapping Chicago-area and state ANPL, according to Moody’s.

That translates to nearly $125,000 in pension debt for every household in Chicago. 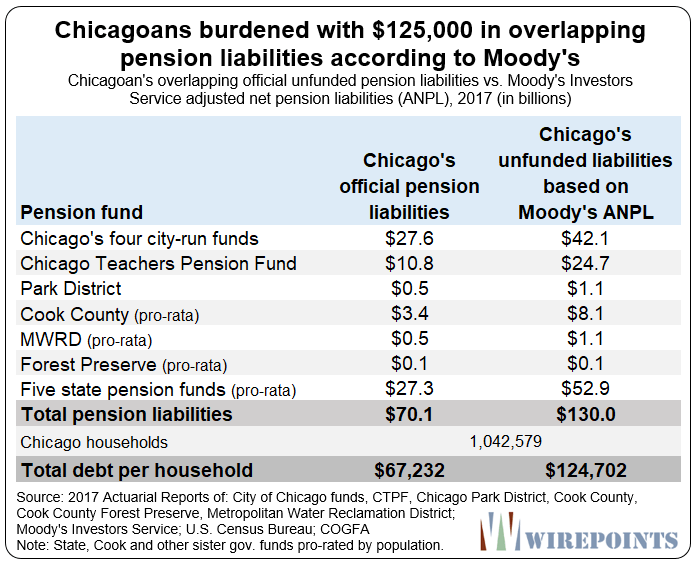 But with so many Chicagoans in or near poverty (27 percent), that burden won’t be distributed evenly. Expect Chicago’s middle class to be stuck with an even bigger burden that makes up for those that can’t pay.

Chicagoans are stuck watching their elected officials do all the wrong things when it comes to pensions.

Politicians have passed record property tax hikes. They’ve covered up the city’s financial problems with gimmicks. They’re looking at a $10 billion pension bond to paper over the crisis.

And they won’t even tell the truth about the massive amount of unfunded liabilities residents are facing.

Fixing the pension crises in Illinois starts with telling the truth. Because acknowledging the real numbers shows just how important real reform is.

One suzoects, as is usully the case, the truth is in-between

What a great and concise article, guys ! Terrific way to describe the calamity. I saw that $38k is the median income for the 1.1M households, so clearly the lower half is not paying significant taxes — thus leaving the upper half to pay $250k each….clearly impossible for them to do and save enough for their OWN retmt !!! ….which Rahm and his fellow ilk in charge don’t give a flip about . Oh, and just interest on that unfunded (quite necessary to pay every year by the way, at the absolute minimum) is…. …drumroll please…. $17,500 per taxpaying household.… Read more »

I’m broke in DuPage County and paying a third of my income in taxes. Even the poor pay a lot.

I don’t doubt that, not one bit. And it’s sad how little attention is paid to the bottom half of income-earners and how much total taxes they pay. Person making $25k/yr pays 15.3% total FICA including the half not seen, 5% ILL state inc, 5.5% effective federal income tax (was 7% < Trump reduction), which adds to 26%, then property tax, sales tax, gas tax. But Dan, the city of Chicago and their enormous pension disaster, only gets money from Prop tax, whatever that is for you. And median family-unit pay being $38k, well alot get some welfare $ for… Read more »

I couldnt find a report that cites either the $130B or $125k figures specifically, but in a report dated Dec 2017 the agency cites a debt and “ANPL” figure per household of $131k. This figure really stands out in comparison to other major cities – the next highest in the Moody’s chart is NYC at about $70k.

My guess is that only 25 percent of households, if that, in Chicago have the kind of income which can put a dent in the $130B debt. If so, if the burden is on those families, isn’t the actual per household debt near 500k for each household? And if so, you have to question why many would stay.

Whether it’s $67 billion or $125 billion the end will only be bankruptcy, the sooner the better.

We called Moody’s directly. They sent us a list of their Chicago-area adjusted net unfunded liablties for 2017.

Speaking of rating agencies, Kroll (the newest entrant) put out an extensive piece on Chicago back in mid 2017….they essentially concluded that “Chicago’s underlying economy has the ability to absorb and afford the transition needed to fund the city’s growing pension and debt burdens”. Has WirePoints seen this report and if so do they have an opinion on it?

The real question is why should tax payers foot the bill for unjust pensions for public sector workers? Even is a person can afford it why should they be willing to pay it? There is a whole world of far better communities than Chicago Illinois or Illinois in general.

Let’s just say I don’t have much respect for Kroll. I have cleaned up my earlier comment on this.

Kroll is an interesting business proposition, isn’t it? Given that fees are paid to rating agencies by issuers, as a new entrant to the market, Kroll is likely under even greater pressure to avoid being rigorous with issuers than the existing bunch of rating agencies, all of whom have conflict of interest challenges already.

March 31, 2020
If you thought Illinois was already up to its neck in pension debts, just wait until the impact of the Coronavirus is tallied up. The state's shortfall will jump to over $310 billion in 2020 if conditions hold through June.
View Comments (1) | Add Comment

March 31, 2020
The full financial and economic impact the Coronavirus will have on Illinois is impossible to predict. For now, Illinoisans can keep an eye on the state’s $7.5 billion unpaid bill backlog to see how the state's finances are holding up.
View Comments (26) | Add Comment

From Wirepoints' Ted Dabrowski and Mark Glennon, "Illinois is a perfect example of a state that shouldn’t be bailed out at the expense of fiscally responsible governments. Gov. J.B. Pritzker, the state legislature and Chicago Mayor Lightfoot all reject structural pension reforms that would fix Illinois’ problems."
View Comments (18) | Add Comment