Compensation for firefighters and police is the third rail nobody wants to talk about. The key numbers are below, including what happened over the last thirty years.

Both the police and firefighter pensions have only about one-forth of the assets they should have to pay benefits promised — officially, that is. The real numbers are worse and we will be writing separately about that.

There’s good reason why most of us lay off the subject of compensation for police and fire. I admit to some bias, too. My relatives include lots of the active and retired firefighters who fill Southside Irish neighborhoods. But the numbers here are mostly self-explanatory, so not much interpretation is needed.

The numbers come from the most recent actuary reports for the firefighter and police pensions released earlier this year for 2014.  Those reports included historical data going back to 1985. I added the comparison of then to now, and to the inflation rate.

It’s that comparison of today’s numbers to 1985’s that jumps out. Remember as you look at these numbers that inflation has pushed prices up 120% since 1985. (I used the national CPI for the inflation number.) For Chicago firefighters:

And here are the same numbers for Chicago police and their pension:

Clearly, while neither population ( which in fact dropped 9.6%) nor the number of workers contributed to it, other numbers spiked up much faster than inflation: average salary, total salary paid by the city, the number of pensioners in the system, their average annual pension and the total paid out by the pension. The jump in total payments out from both pensions is particularly staggering. 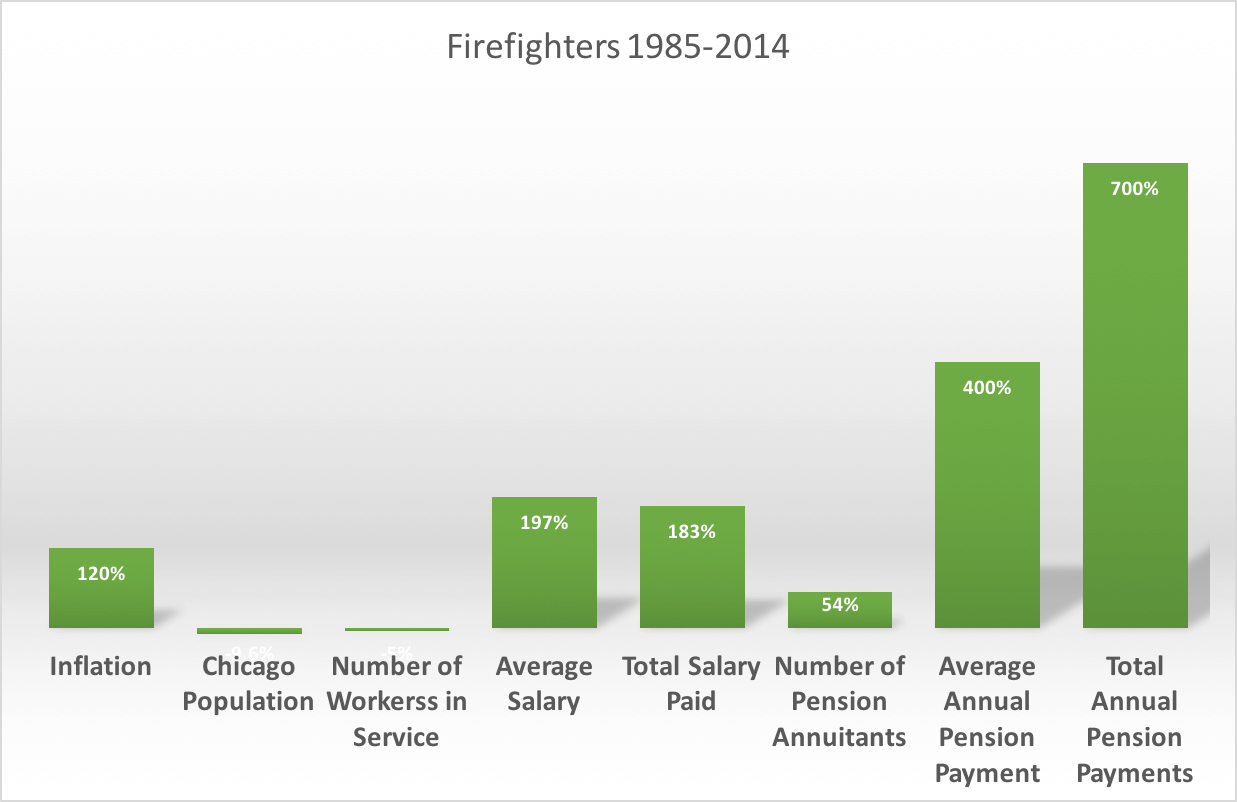 To show directly just those percentage changes from 1985 to last year, I put them in the charts to the right

None of the increases is attributable to working longer. In fact, the average number of years of service for police dropped from 30 to 26 over the last 30 years. For firefighters, it held constant at about 30.5. 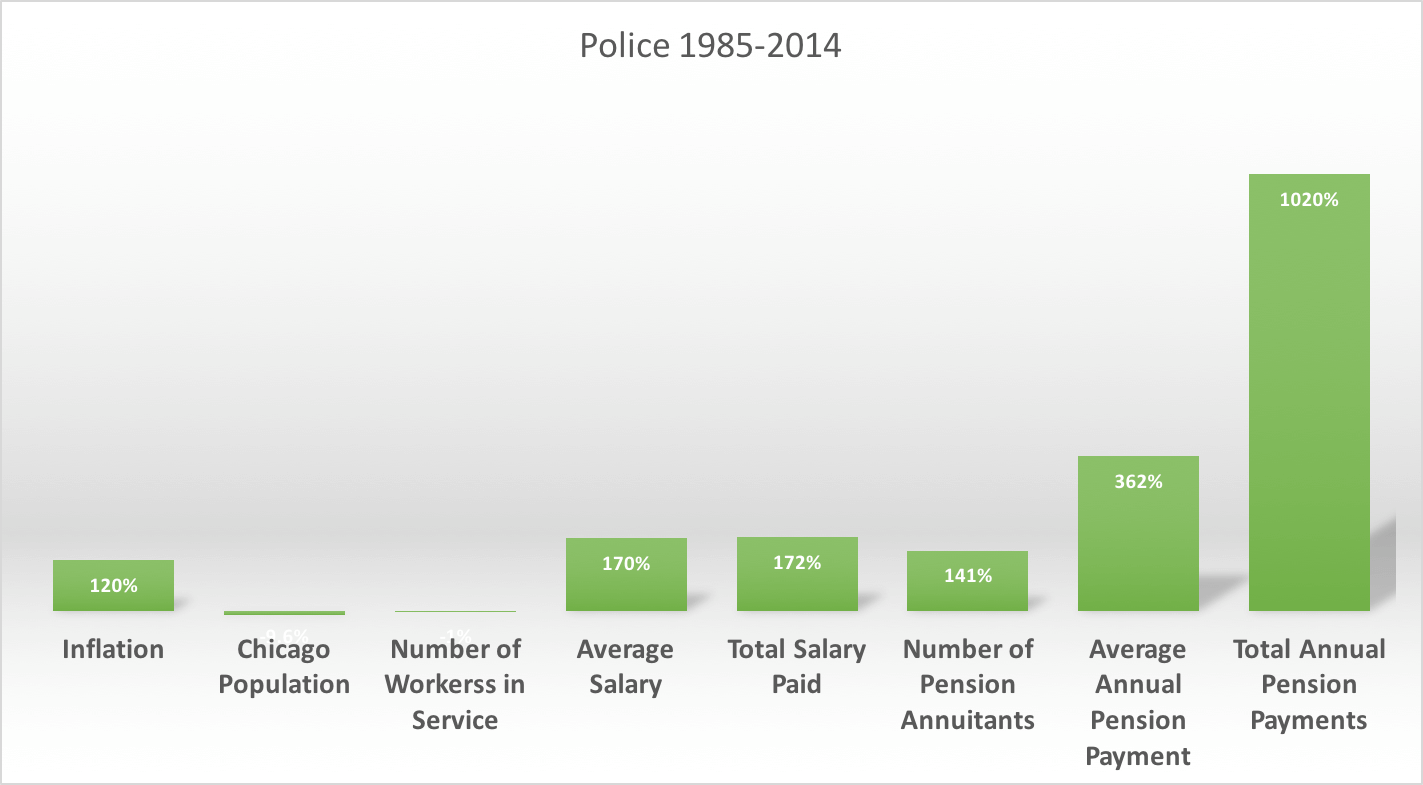 Keep in mind that the average salaries do not include overtime. Chicago paid out $197 million in overtime in 2013. It has also paid out almost a half million dollars to one law firm to fight one suit about overtime — whether time spent after hours on emails and such should count as overtime.

I’ll leave it at that. I’m already starting to wonder what will happen when I ask for the stuffing at Thanksgiving dinner with those relatives.

Hello, Uhaul? How much to rent a truck? I’m moving…

KA CHING, KA CHING, KA CHING! YEAH, IT MUST BE THAT TIME OF YEAR AGAIN! My Union Boss down at the Town Hall emailed me yesterday and. Told me that this article was hitting the Papers today, and He told Me. to make it Look like I was Working till this Blows Over in a week. I know the routine! In a week, I’ll be back to my usual activity of. Collecting A Paycheck for Doing Nothing! Hey, Private Sector. Workers; You really gotta Pony Up more Taxes! I need at least a 10 %. raise! My Cabin Cruiser at… Read more »

Fired back at Crains Greg Hinz today with this comment on one of his articles at Crains: Greg is so wrong here. He says “the state screwed the pooch and used the money elsewhere — in part to pay higher wages.” OK Greg, so the state did it for the unions higher wages partly as you yourself stated. In no way is that the taxpayers fault and the unions got something out of it as usual. Greg, the pensions mathematically cannot be paid in full and will not be, whether that is due to bankruptcy, or whether that is due… Read more »

If I were your relative, I would not even invite you to Thanksgiving!! After all YOU make more money than THEY do, and all you do for a living is write whinny columns complaining and belly aching!!! YOU GET PAID FOR THAT!??!!?? Try risking your life everyday!!!! Besides, we ALL learn to write in 2nd grade, then most of us go on to better things!!!!

I sense the often-heard mindset of a Public Sector worker, and disdain for the betrayed & beleaguered Taxpayers forced to pay for their out-sized pensions and benefits.

Ten-to-one either you or a family member is now (or will be) receiving a Public Sector pension.

And 10-1 that you have not EARNED a public pension. Your bias shows quite clear

Correct, as I have never worked in the Public Sector. But calling the full pensions of Public Sector workers “earned” is anything but truthful. Public Sector pensions are typically 3x-4x (4x-6x for Safety workers) greater in “value at retirement” than those of Private Sector workers retiring with the SAME cash pay, the SAME years of service, and the SAME age a retirement. This HUGE differential is the combined result of much richer Public Sector pension “formulas” and much more generous “provisions” such as much younger full/unreduced retirement ages and COLA increases (almost unheard of in Private Sector Plans). The ONLY… Read more »