Illinois gubernatorial candidate J.B. Pritzker has a new TV ad where he promises to raise taxes on the rich – on guys like him and Gov. Bruce Rauner – while lowering taxes on the middle class.

Don’t buy it. It’s an empty promise. He’ll end up taxing the middle class as well.

The proof is in the tax rates of Illinois’ neighboring states. Just look at how they tax the middle class. Their rates – whether headline or effective – are typically higher than those in Illinois, unless it’s Indiana or Michigan. They have low flat tax structures.

Or look at Minnesota, its lowest marginal rate of 5.35 percent is higher than Illinois’ flat 4.95 percent rate. The tax rates only go up from there. 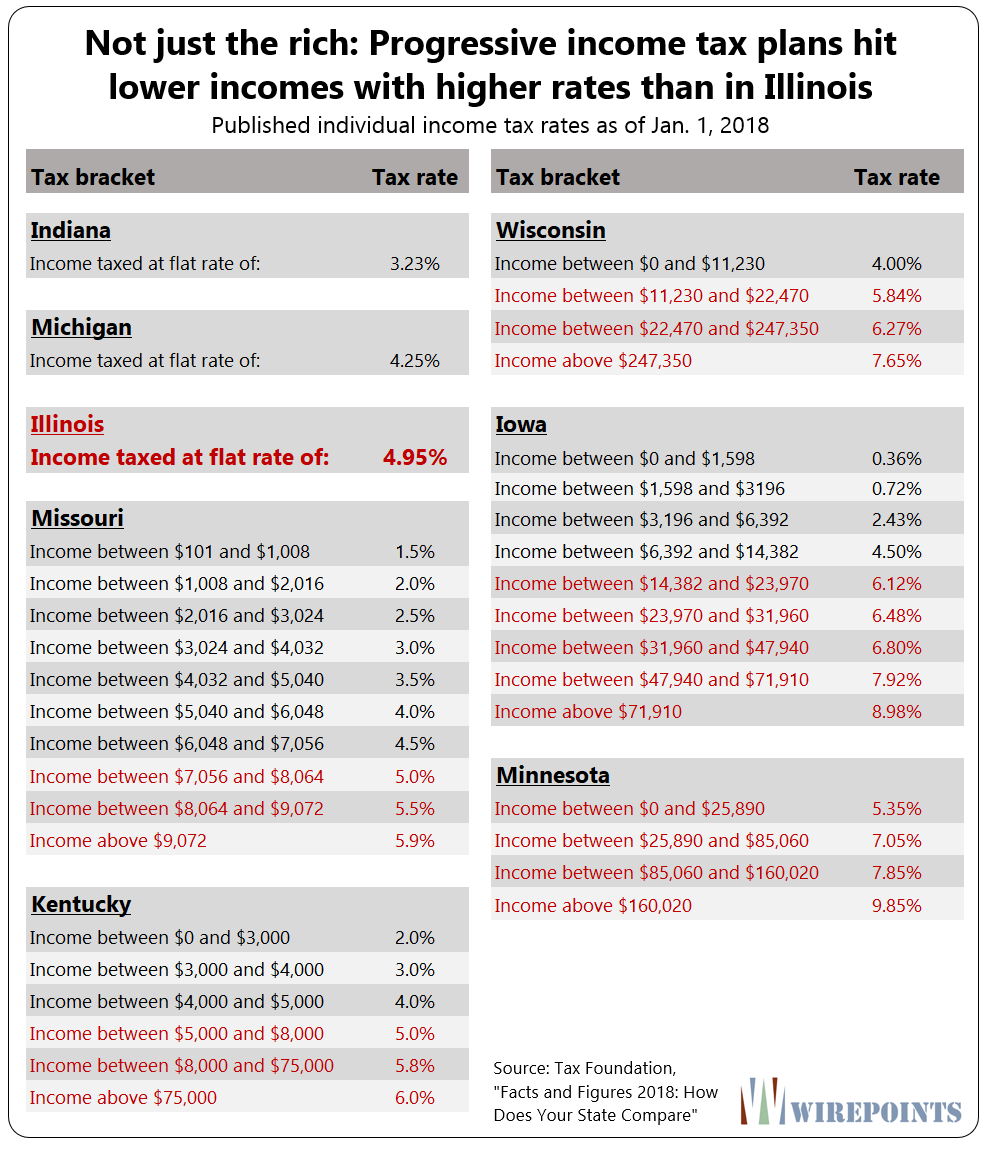 Adopting a progressive tax scheme that’s anything like our neighbors’ would actually punish middle-income workers and working families. That’s true even when taking effective tax rates, which include exemptions and deductions, into account.

Whether you’re an individual earning $70,000 or two married mid-career public school teachers, you end up paying more under their progressive tax schemes. Click here for a broader review of the effective progressive income tax rates of Illinois’ neighbors. 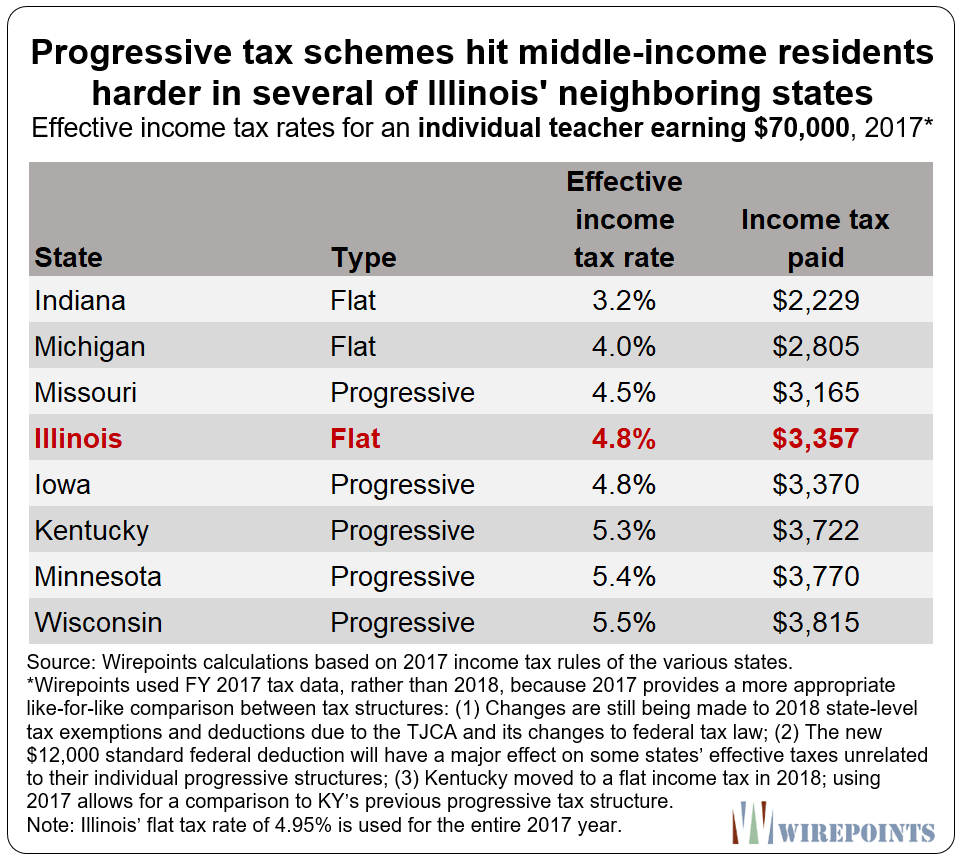 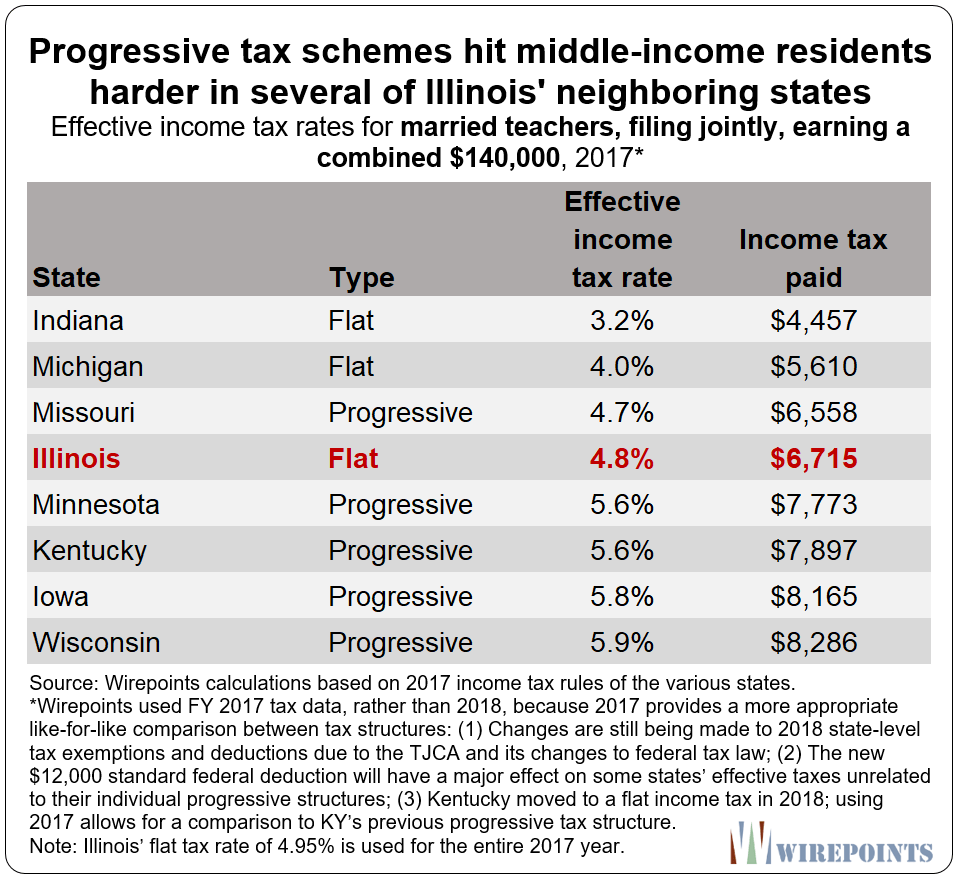 Pritzker isn’t telling the truth about his tax plan – he won’t even give Illinoisans any specifics. But he should be forced to – by the media, the political elite and Illinois voters.

Pritzker promises to spend billions and billions more on everything from education to healthcare to pensions. But he can’t do that without hitting up the middle class – just as politicians have done in neighboring states and around the country.

That’s the reality of the progressive tax schemes surrounding Illinois.

The tax hike is being sold as a cure-all, but it will only end up perpetuating Illinois’ fiscal crisis. All at the expense of the middle class.

Read more from Wirepoints about attempts to impose a progressive tax:

Robin Hood would steal from the Rich and give to the poor.
A popular legend. There will be a new Robin Hood movie out soon coming to theaters near you, just saw the trailer.

The voters, we the people, will decide come Nov on our prefered policy.

Neither of them is talking about anything remotely close to a real plan.

Since they are going to be in there modifying the constitution anyway, hopefully they will get rid of the pension non-diminishment clause while they are at it.

Yet another reason I’m glad to live in Indiana.

It’s not even a legal viable option at this point. So why are politicians wasting our time and money? The progressive tax would require a constitutional amendment. Earliest it would take would be 2 years. And how much would it raise?
Maybe, just maybe $2B. Drop in the bucket. IL has 250 Billion worth of unfunded pension liabilities.
Let’s focus on making the State

A single filer making $150,000 would pay a lower state income tax in EIGHT progressive states than they do in IL while TEN progressive states have an effective income tax rate less than 1% higher than IL (not counting personal exemptions) at that income level. Of course, all those states have significantly lower property taxes too and JB has no plan to lower property taxes. Someone should write up some progressive tax plan/manifesto and have JB sign it. Something like: – No more than 5 tax brackets – The top rate can be no more than 4 percentage points higher… Read more »

1
Bob Out of Here

Indiana also levies an income tax at the county level which can push the effective tax rate up far higher than IL. It’s over 6% in Jasper County. https://www.payroll-taxes.com/state-tax/indiana-counties.

0
Ted Dabrowski
Reply to  Bob Out of Here

1
nixit
Reply to  Bob Out of Here

Michigan also has a flat city income tax from 1-2.5%. But the kicker is non-residents only pay half the rate as residents. Imagine the outcry from aldermen if Chicago implemented the a city income tax (they can’t due to home rule) but charged their residents twice the rate of commuters. The CTU and their council allies were pushing for a commuter tax a couple of years ago. Talk about taxation without representation.

Michigan property taxes are significantly lower, so it’s a wash and probably cheaper in Michigan.

0
Connie Cain
Reply to  Bob Out of Here

It is still cheaper than paying Illinois property taxes. 3.2% Indiana state tax plus 2.864 % for Jasper County, but most of the other counties are less. Pulaski is high too. The average is probably around 2%

1
Bob Out of Here
Reply to  Connie Cain

I realize that, but this article is about a progressive income tax, not total tax burden. Even staunch Democrats realize the overall tax burden is less across the border in Indiana.

Most counties are around 1-2%. Hamilton County (Northern Indianapolis Suburbs) is 1%