“Excess deaths” is the term used to consider how many total deaths from all causes are occurring compared to averages during the same period in previous years. Of particular interest is whether the excess goes even beyond the number of reported COVID-19 cases. We’ve often been asked to address those matters, the thinking being that the numbers might provide another insight on COVID-19’s true toll.

We’ve been watching those numbers and spoke about them Monday with Mary Pat Campbell. She’s an actuary who writes often on her website about the issue and is the wonkiest numbers geek we know (which she’s happy to admit) who has been pouring over excess death data in great detail.

She confirmed our take, which is that more deaths definitely are occurring — more than even the number of reported COVID cases would indicate. That’s true nationally and for Illinois.

However, the reasons for the excess beyond reported COVID cases is unclear. Some claims have been made that the excess means that more people are dying of COVID have than have been reported. That claim has little support. There is strong evidence, instead, that the response to the virus and indirect consequences are the primary causes of excess deaths, and may account for the entire excess.

Here are the details:

According to a November New York Times analyses of The Center for Disease Control data, about 356,000 more deaths than recent historical averages had occurred in 2020 as of then in the United States. However, about a quarter of those were not attributed to COVID-19. Campbell concurs with it’s about one quarter.

The CDC has a dashboard devoted entirely to excess death data. Campbell pointed out the excess deaths for Illinois’ older age groups are particularly high, which you can see on the CDC dashboard by comparison to other states and the nation as a whole. The CDC’s chart for Illinois is below. The red line is actual total death count and the gray is the historic norm. 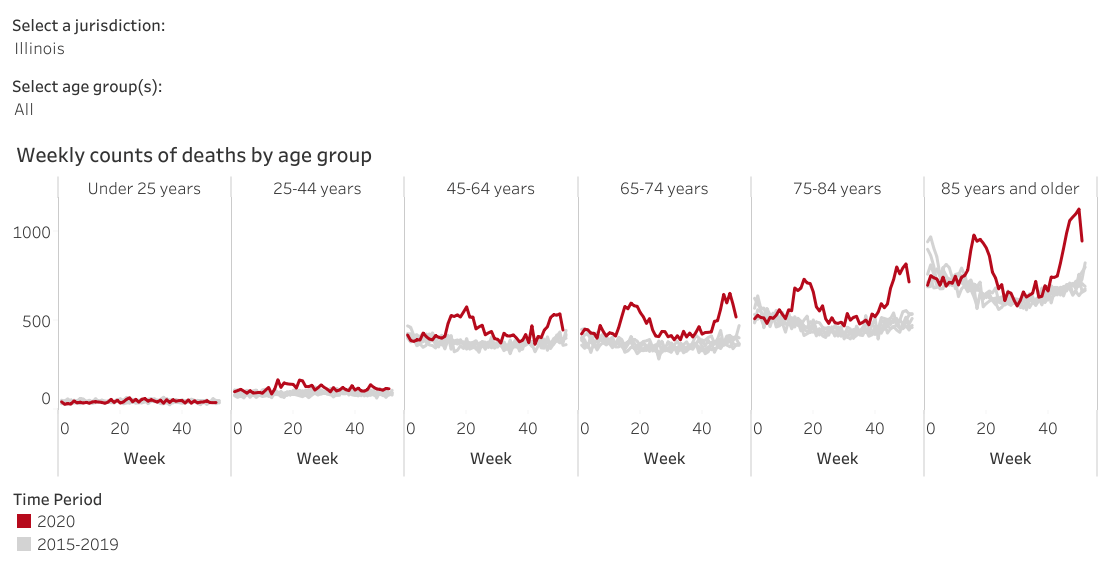 The higher concentration of excess deaths in the elderly seems to be true for a number of other Upper Midwest states, for reasons unclear. Campbell speculated that colder weather perhaps had driven the elderly indoors, which is typically also dryer. Confined space with less humidity helps spread the virus.

The primary issue is what accounts for the 25% or so of excess deaths beyond those attributed to COVID, not just for Illinois’ elderly.

Those deaths almost certainly are not due to significant under-reporting of COVID infections, as some have claimed.  Early in the pandemic that may have been true, Campbell said, due to shortfalls in testing, but not any longer. “Many of them are most likely indirectly related to the virus and caused by disruptions from the pandemic, including strains on health care systems, inadequate access to supplies like ventilators or people avoiding hospitals for fear of exposure to the coronavirus,” according to that NYT analysis of CDC data.

More recently, excess deaths are more frequently being attributed to what MarketWatch called “deaths of despair,” citing a new study published by the National Bureau of Economic Research. Drug overdose, suicide, alcohol and more are also spiking higher deaths, as well as skipped preventative care visits to doctors. Despair is undoubtedly rampant among the elderly, who have been confined, separated from families and had restricted human contact.

Those effects will persist long after the virus itself is gone.

Most significantly, the study projected that excess deaths resulting from the economic strain of the pandemic will amount to 900,000 over the next 15 years, a “staggering” number, the authors said.

Maybe that estimate is too high; others have made lower estimates, as MarketWatch reported, and studies of this kind are inherently speculative. But the point is clear that indirect effects of the virus are only now showing up. They will persist and may be huge.

In short, nobody now has enough information to tell the full story on excess deaths with any confidence. We may never know precisely. In the meantime, beware of simple explanations and claimed certainties, particularly claims that excess deaths show that the virus is under-reported.

In addition to excess deaths, is there an index that quantifies the fragility of individuals who have died from Covid-19? A “health fragility index”, maybe taking the life expectancy of those who died (taking into account whatever information is available – age, gender, smoking, weight, other comorbidities) divided by the number of people who died from Covid-19. Just curious.

I’ve learned a lot these past few days with Covid. My husband and I got Covid before Christmas. I didn’t even know I had it. My husband ended up with double pneumonia along with Covid. Here is my first complaint. Called doctor one who was on duty for his doctor since it happened to be Christmas. Doctor told me nothing he could do for him just let it run it’s course most people get over it. Just treat symptoms with over the counter medication. Asked about the medication hydrocloraquin and z pack. Doctor told me that doesn’t work. Just over… Read more »

Unintended consequences often turn out to be worse than the original problem. I wonder if politicians will ever learn that lesson?

However, we are in uncharted territory here…

This has never been done before, locking down the healthy…

Any predictions of what’s to come are purely speculative…

We have no precedent to go by…

Interaction with other humans sometimes causes us to act poorly, however it often is uplifting and helps pull us out of depression. Covid reduces human interaction and the virus itself adds to depression. Watching those you care about get sick or a loss of income (for example) are easier to handle when friends are near to provide hope. These days, friends are keeping their distance out of fear. Humans tend to make bad choices when they feel alone that are self destructive. (Just my opinion, based on nothing but personal observation.)

January 14, 2021
Mike Madigan’s tenure as House Speaker is over after nearly 40 years at the helm. In his place, Democrats have elected Hillside Democrat Emanuel “Chris” Welch to lead the chamber. Madigan’s loss of power is a monumental change, but just because he’s gone it doesn't mean Illinois’ problems are over.
View Comments (44) | Add Comment

ABOUT US
© Wirepoints Corp. 2012 - 2020. All rights reserved.
Contact us: admin@wirepoints.org
FOLLOW US
wpDiscuz
6
0
Would love your thoughts, please comment.x
()
x
| Reply