C’mon, Governor. You either have it or you don’t. Give it to us or admit you had no reasonable basis for your claim.

Last month we wrote about how we’ve been stonewalled in our efforts to get proof behind the numbers Governor JB Pritzker claimed he has showing savings of up to $25 billion from Illinois’ pension buyout program.

In December, he specifically claimed his numbers were based on a report from an outside consulting firm. We filed a Freedom of Information Act request on December 19 to get that report.

We’ve now received the fifth request for an extension of time, with no explanation. The most recent is below. 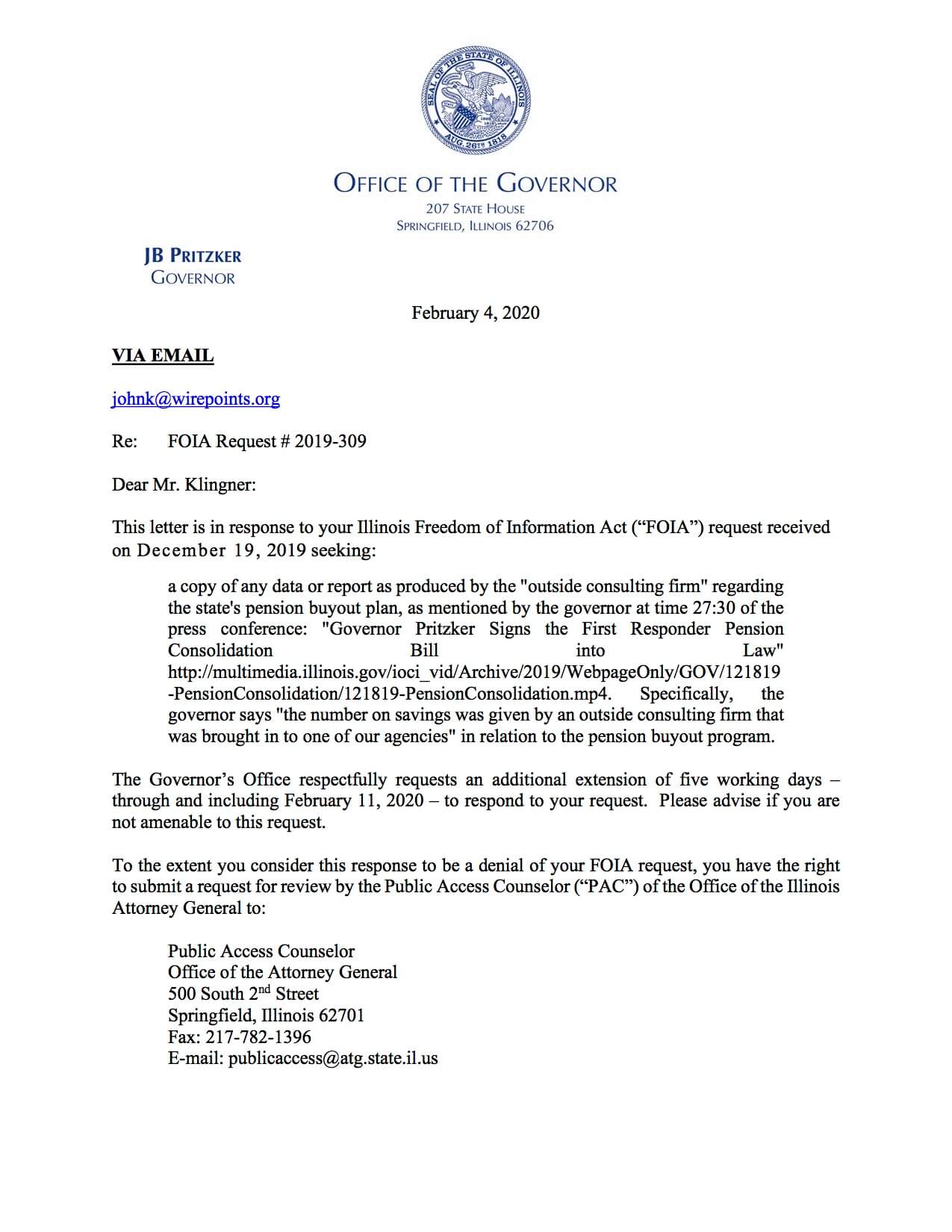 Here is the URL to the video of the Governor’s December 18, 2019 Downstate Police and Fire consolidation press conference that is referenced in the FOIA request. https://multimedia.illinois.gov/ioci_vid/Archive/2019/WebpageOnly/GOV/121819-PensionConsolidation/121819-PensionConsolidation.mp4 Jeff Berkowitz’s question, to which JB Pritzker’s response included a claim about pension buyout savings that is the subject of the FOIA request, begins at 23:39 in the video. The video can also be accessed through the State’s audio archive website: https://www2.illinois.gov/cms/agency/media/radio/Pages/AudioArchive.aspx The original press release, which is referenced in the FOIA request, was titled, “Governor Pritzker Signs the First Responder Pension Consolidation Bill into Law.” That title was subsequently changed to,… Read more »

KEEP AFTER HIM & DON’T LET UP!
Thank You for what you are doing!

“Never ascribe to malice, that which can be explained by stupidity”
Do you think Hanlon’s Razor applies to Illinois government?
I think the historical record of Illinois Democratic governance will prove to be an exception to Hanlon’s observation.

Yep, those running Illinois into the ground are both evil and stupid.

JB obviously thought nobody would question him, since most of the media in this state just blindly supports anything he says. Good job catching him on his back foot, guys.