Illinois had just $4 million of rainy day funds before the Coronavirus hit. That was enough to cover just one hour’s worth of the state’s $40 billion operating budget.

That finding is based on a new report published by the Tax Foundation. The Foundation measured the fiscal year 2020 rainy day funds of each state across the country and compared those amounts to each state’s annual expenditures. States like Wyoming, Alaska, North Dakota and New Mexico had more than 25 percent of their annual expenditures, or at least 3 month’s worth of spending.

The national median was about 8 percent of annual expenditures – meaning most states had cash to cover about one month’s worth of operations.

Kansas and Illinois had zero percent of expenditures set aside. Technically, Illinois had about $4 million in its rainy day fund, or 0.01%. 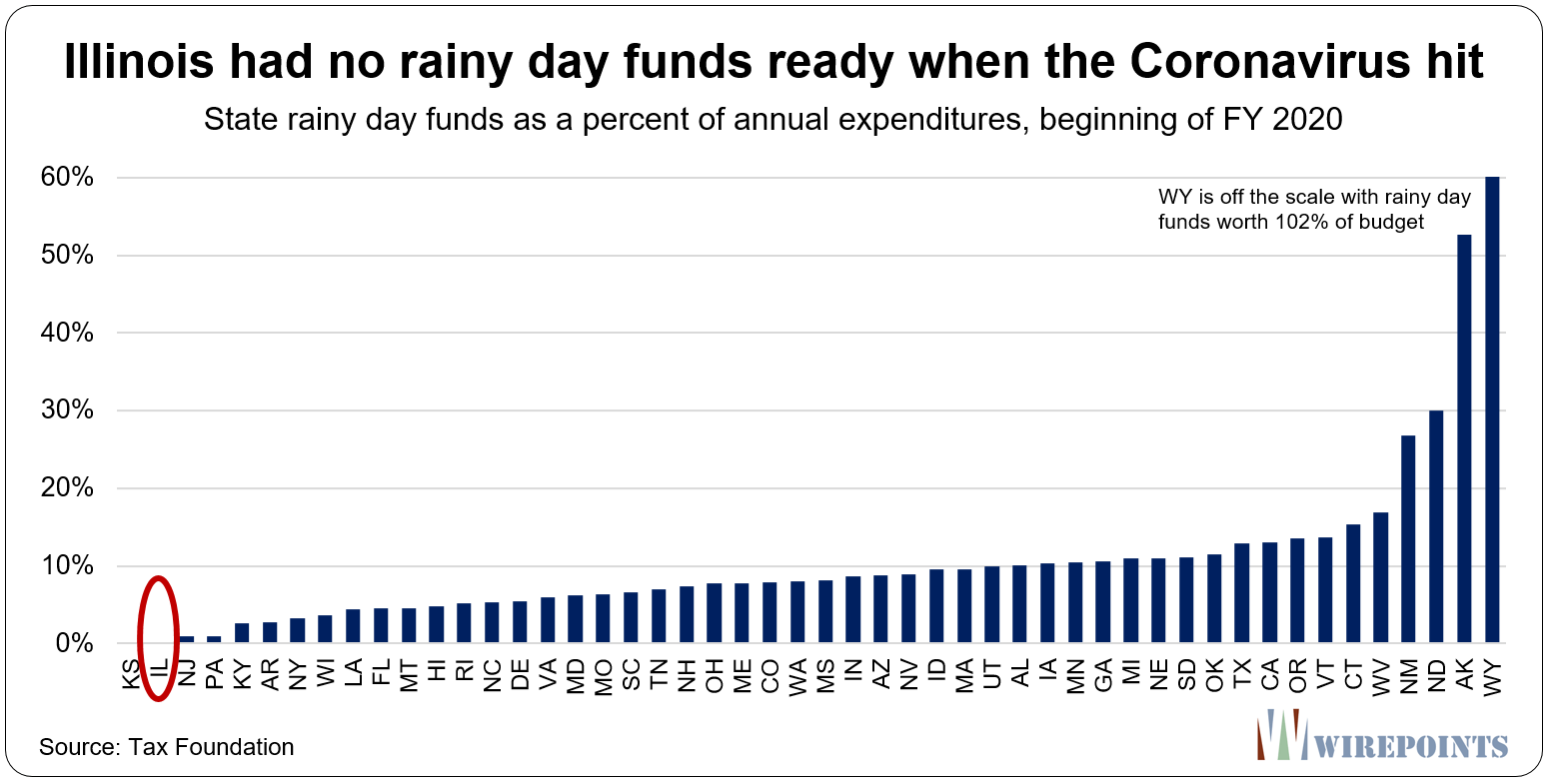 Of course, the discussion of a rainy day fund is meaningless in Illinois. The state has nearly $8 billion in unpaid bills, billions in budget budget deficits and hundreds of billions more in pension shortfalls.

Illinois politicians may want to blame everybody else for the state’s problems, but the reality is they’ve left the state, and its residents, financially unprepared for any kind of emergency.

Read more about the impact of the Coronavirus on Illinois:

One hour of rainy day funds! I am shocked that Illinois politicians could sock away that much for an emergency!

If you live in another state, anyway…

More like a Drizzle or light Dew or even a Mist fund.

“That was enough to cover just one hour’s worth of the state’s $40 billion operating budget.”

For IL government, this is actually very well prepared.

But CPS teachers faithfully contributed 2.5% of their salaries to their pension fund. Never mind the 30% drop in the stock market.

How’s that math going to work out?

Geez did anyone inform Madigan of this situation? He’s in charge you know.

Has anyone even heard even a peep from him lately?

What ever you do, don’t tell the Greedy Unions.
The virus will let Illinois off easier than the Greedy Cops, Teachers and Firemen living on huge pensions in Florida. See you in court in a NY minute.

The ONLY chance is to remove ALL the Politicians in Office and start over with Politicians that actually care about Illinois and the Citizens! This election is your LAST chance. R

Considering Illinois’ massive debt load, does it makes sense for the state to keep cash on hand earning minimal, if any, interest while paying high interest on outstanding bills/bonds/pensions? On the flip side, no rainy day fund means we’re going to being paying those rates anyway because we need to take out loans to pay today’s bills. So perhaps it’s a zero sum game.

You are correct it doesn’t make sense to let the Democrats and unions who run Illinois have access to any extra cash. This does make clear however that if you add up all of the unpaid bills, then the Illinois rainy day fund is actually negative $8 billion and not $4M.

November 23, 2020
The strategy of shutting much of the state down – from lockdowns to school closings – has done far more harm than good, in part because it’s taken health officials’ eyes off of the elderly and the infirm.
View Comments | Add Comment

November 23, 2020
While school openings have become heavily politicized in recent weeks, the good news is that more experts on all sides agree schools should strive to reopen and stay open.
View Comments (3) | Add Comment

November 19, 2020
Mamie Cosey and her family are victims of a growing malaise impacting cities across Illinois, where residents are taxed out, services are being slashed, police and firefighters are losing their jobs, and public pensioners are losing their retirement security. A recent law that garnishes city tax revenues to pay for pensions is making things worse.
View Comments (20) | Add Comment