Updated information from the University of Washington’s Institute for Health Metrics and Evaluation, or IHME, shows that Illinois has already passed its peak resource needs for hospital beds, ICU beds and ventilators.

IHME, which now says Illinois’ resource needs peaked on April 3, previously expected the peak to be reached on April 16.* IHME also significantly reduced its COVID-19 death projections for Illinois over the next few months.

The Gates Foundation-funded IHME is one of the sources Gov. J.B. Pritzker has used to determine his health, shutdown and stay-at-home executive orders over the past month. The governor says he uses other models as well, but he has yet to reveal those other sources and how precisely they impact his administration’s decision making. He was asked expressly, at his daily briefing on April 10, to share the models and methods he is relying on, but again ducked the request.

Illinois now has far more hospital resources than it needs, according to the latest reported IHME projections. That’s true even for IHME’s worst-case scenarios, based on the most recent hospital resource data reported by the state. IHME’s projected resource needs for Illinois and many other states have dropped dramatically in recent days, reportedly due to the strict social distancing actions implemented in most parts of the country.

Many groups originally criticized IHME’s initial projections as too pessimistic, while others now claim that as the group lowers its death and resource-need projections, it’s understating the risks going forward. Gov. Pritzker responded to the IHME news this way: “The models that show the death rate might be lower than expected… gives me optimism,” he said. “There are equal models out there that show something different. We look at multiple models. When I see that the IHME changed its numbers I of course go back to the models and ask the question, ‘What changed? Why did they make a change?’ Sometimes there are good explanations like they’re in agreement with one another and sometimes there are not good explanations.”

The below chart compares Illinois’ current COVID-19 bed, ICU and ventilator resources to IHME’s worst-case needs in the next few weeks. Illinois has significantly more overall resources than it needs relative to IHME’s April 10 projections.* (Of course, some hospitals do have real PPE and other resource shortages, a logistical challenge the state must meet.) 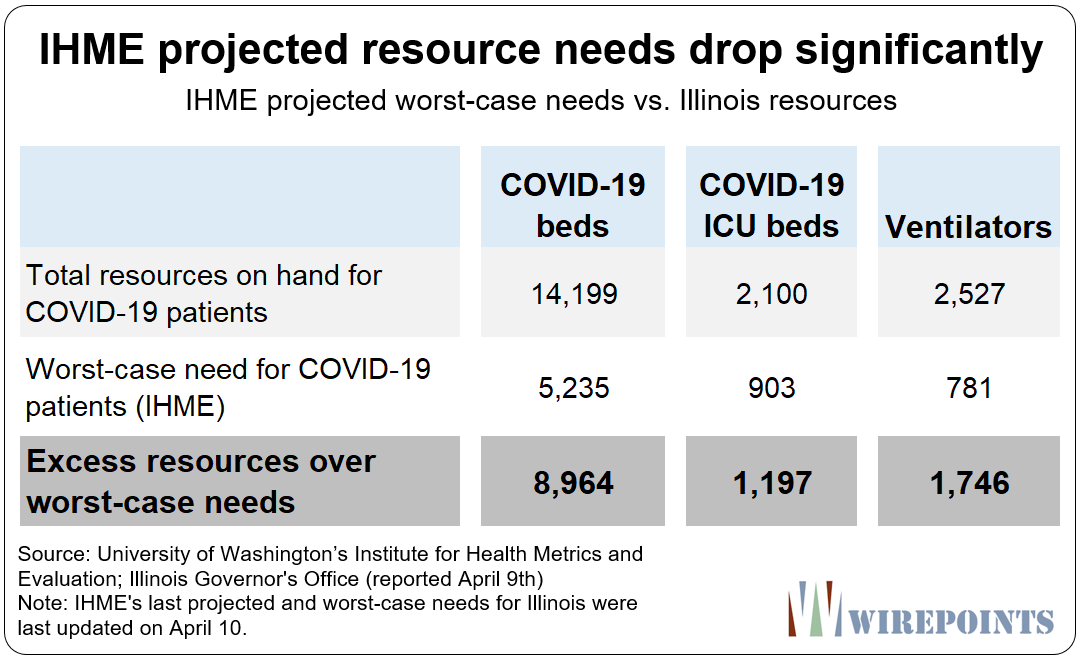 As IHME’s projected resource needs have collapsed, so, too, have COVID-19 death estimates. Just over a week ago, IHME predicted a worst-case scenario of nearly 15,000 Illinois deaths through August. Its most recent projections, made on April 10, drops that worst-case scenario to 1,400 deaths (Appendix 1). Illinois’ reported death toll from the COVID-19  reached 596 on April 10, when 68 new deaths were announced.

Similar positive news nationally has led President Trump to talk of potentially opening up parts of the economy as early as May 1. The president is creating a second coronavirus task force focused on the economy. States like Ohio and cities like Dallas are also creating similar task forces focused on their economies.

Gov. Pritzker, however, has not made any similar announcements in preparation for an eventual reopening of the economy. Illinois has reported a spike in unemployment benefit claims over the past three weeks, with more than 500,000 residents requesting relief.

And under one scenario from the Federal Reserve Bank of St. Louis, unemployment in Illinois may reach a high of 2 million in the second quarter. Interwoven with economic decline are drug abuse, depression, domestic violence and deepening poverty that destroy families. All that can’t be ignored.

As the curve flattens and the economic damage grows, the question of when the economy will reopen will be raised more and more. That means Pritzker won’t be able to keep shrugging off questions about the models and the data he’s using to make the state’s big health and economic decisions. His unwillingness to be transparent about the data is something public won’t accept much longer.

*Wirepoints will address the shortcomings of the IHME’s latest projections in a forthcoming piece.

Read more about the impact of the Coronavirus on Illinois: 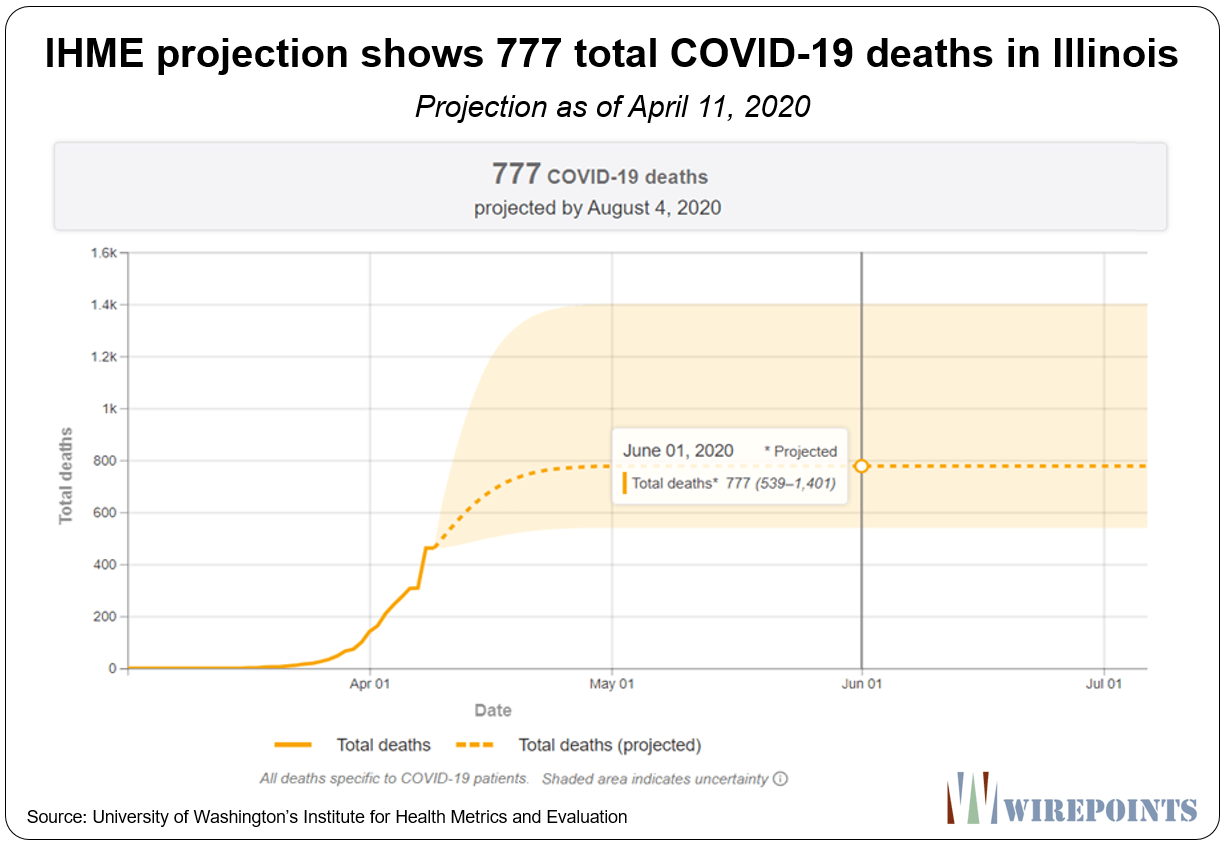 Does anyone have stats on hospitalization rates, icu patients and death rates per month, compared to previous years? Is it possible we are classifying deaths as COVID that were classified as flu or pneumonia in previous years? I understand that on a national level we had less deaths in March 2020 than the last 5 years.

Although Pritzker does not have to paint a picture of economic doom and gloom for Illinois, as it existed before this pandemic, he will damn well try and get the federal government to bail him out for the ineptitude of the state to properly handle financial matters.

This is a critical time for civilian vigilance over taxing bodies and NGOs receiving oceans of federal taxpayers’ money.
Evidence should be collected (legally, remember you cannot record a person speaking in Illinois) and False Claims Act cases organized.
There are substantial rewards for citizens who follow through.
Civilian scrutiny of political class malfeasance could have a chilling effect on future such malfeasance.

As a matter of perspective according the IDPH website annual flu deaths in Illinois average 3,500 with a high of 4,021 in 1993. The common traits between the flu are very similar-compromised immune system cause by nutrient deficiencies like low Vitamin D/magnesium/b vitamins lack of probiotics/etc.These are prevalent in the general public but more so in African-American communities. In poorer areas in my opinion the drug of choice is any diuretic or HCT/ for hypertension because other are very cheap (180 tablets of 50mg for hct for less than $10. These deplete most nutrients and minerals is short order especially… Read more »

I wholeheartedly think this virus was a bad one…but this article is a good one by a nurse here in Chicago. It been here a lot longer than anyone is letting on.

That’s a very important article if true, but we have questions about that and are trying to check it out. I sent an inquiry to the hospital on Friday. No response so far. Those authors are supposed to be digging further so we will wait to see more.

When we originally accepted the premise that we would now have our right to freely go about our daily business taken away, it was because we understood the grave need to “flatten the curve.” We are sensible people, but still probably too trusting when it comes to entrusting our politicians with our liberties. As it is, the democrats are shifting the goal posts here. It looks to me like the curve has significantly flattened, so why is there talk of extending the “shelter in place” beyond April 30? It’s still only April 11, so this is REALLY pushing the boundaries… Read more »

I think JB the rotund one is angling very hard to get the Feds to bail out this bankrupt state. The worse he makes it look even though the numbers are flattening out, the better he thinks his payday will be. The scariest part of all this is there are some that think this complete moron os looking to be a national figure. Can you imagine a crook like him going national ? I guess money is no object if he wants it. Good ole Illinois. We put one of the worst Presidents in office and now we have another… Read more »

The bailout desire occurred to me, too, but isn’t it kind of stupid (not your point, but that they think crushing our economy will net more dollars from the Fed than the cost of doing so)? I mean, if our state economy loses $50 billion in total because of this, do they really think they’re going to get anywhere close to that from the federal government? And, every other state will deman pro rata, equal compensation. So ultimately it’s simply a transfer payment from one ledger to the next. We will ultimately all pay for it, but I guess they… Read more »

The only lens Jabba and people like him look through at current events, this included, is how they can be used to advance their own power and control over those around them while simultaneously building their sense of self righteousness.

It’s been clearly demonstrated over the years these people do not think in rational terms like the authors and readers here. As the saying goes, you can’t reason someone out of a position they didn’t reason themselves into. They will shrug off whatever they want for however long they want.