Reporters and politicians in both parties too numerous to name are calling the new Illinois budget “balanced,” and many are bragging about it. It passed the General Assembly today and Governor Rauner says he will sign it. 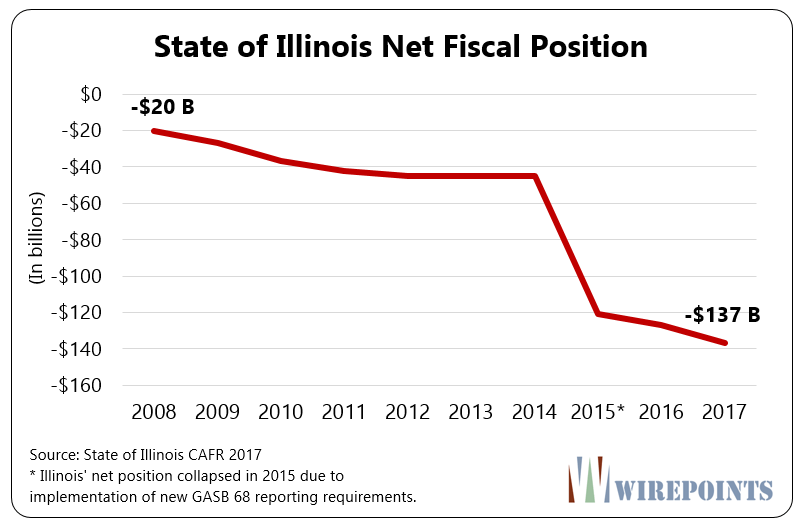 That’s right, about $10 billion lost on average each year. That’s for all state funds. If you happen to be interested in the General Fund in particular, it was in deficit by $14 billion last year.

It’s not just the routine gimmicks used to cover up a billion or two dollars using phony budget accounting, though there’s plenty of that again this year that we already know about. Ted Dabrowski wrote here earlier today about some, and we’ll no doubt find more as we digest the 1,200 pages the General Assembly got only hours before voting.

The vastly bigger problem is accruals — running up bills with no way to pay, especially unfunded pension liabilities — that don’t show up in the budget. For further explanation, see our earlier article linked here.

It’s for that reason that the narrative itself is a lie.

Voters get overwhelmed with discussion about a budget hole of a couple billion dollars, which would be easily solvable, leaving them with no idea that our plunge into the abyss is proceeding at rate many times that.

What will the true loss be for the upcoming year covered by the new budget? That’s impossible to predict exactly because we don’t know things like how well pension fund investments will perform, but it’s safe to say it will be at least the average we’ve been seeing over the last ten years — $10 billion.

Here is a more precise footnote to the data from the FY 2017 State of IL CAFR, for those who wish to see where the data is located in the CAFR or are looking for more detail.

Also, here’s another WP article about the subject.

“Lie” is a good word to describe it. So is “fraud”. Our local rag, The Pantagraph, is trumpeting a balanced budget passed with little rancor and much bipartisan cooperation. Hooray! We’re saved!

Never mind the courts, says Pritzker. Only his view of the ‘science and data’ matter. – Wirepoints

May 24, 2020
Pritzker is now out of touch, oblivious to the firestorm surrounding his order, confident he can dismiss all critics as political grandstanders and much worse.
View Comments | Add Comment

May 24, 2020
The Illinois General Assembly has finally passed an emergency budget for 2021  Tax revenues have taken a severe hit due to the impact of the shutdown in response to COVID-19, yet that hasn’t stopped lawmakers’ spending priorities. The state will spend a record $42.9 billion while bringing in just $36.8 billion.
View Comments (9) | Add Comment