How Illinois State Rep. Mark Batinick – typically known as a reformer – ended up legitimizing a slick, kick-the-can pension repayment scheme sponsored by the Center for Tax and Budget Accountability is baffling. His full plan is detailed here in the State Journal-Register and the CTBA plan is here.

Perhaps Batinick’s handlers didn’t tell him what exactly was in the CTBA plan. Or maybe he’s just so frustrated with what’s going on in Springfield that he’s convinced himself parts of their plan make sense.

But if you read the CTBA plan – and take into account the group’s goal to defend the current pension scheme at all costs – it’s pretty easy to see that Batinick is way off course.

Here are a few reasons why:

1. The CTBA pension reform has nothing to do with reforming pensions. It’s only about “reamortizing” the pension debt – meaning the CTBA changes the amortization schedule by frontloading repayments over the next decade and then flattening them out going forward.

At first glance, that sounds pretty good until you realize two bad things. One, to frontload those payments, CTBA wants the state to borrow $11 billion from the bond market. That’s a non-starter. 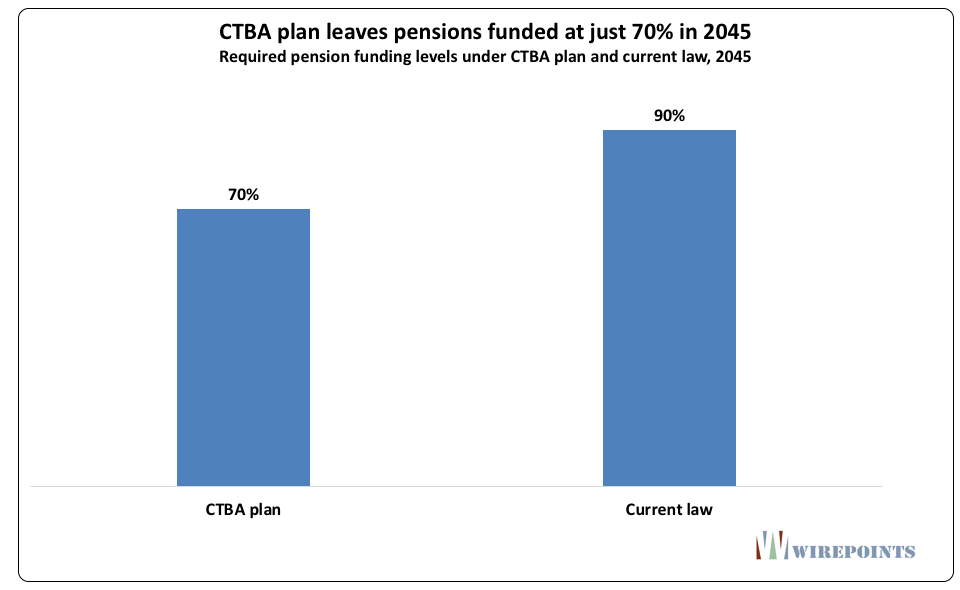 It’s just the next can kick and that’s not good for public sector workers or pensioners. They, too, should reject this plan.

2. The CTBA plan says nothing about slowing down the growth in pension benefits to levels that Illinois residents can afford. Instead, it pushes the narrative that taxpayers haven’t done their share to fund the pension plans. It’s why the CTBA supports a progressive tax hike, even after last year’s $5 billion income tax hike.

Read more about the false narrative – that taxpayers are to blame for the pension crisis – here: Illinois state pensions: Overpromised, not underfunded.

3. As mentioned, the CTBA plan also calls for $11 billion in borrowings from the bond market. In other words, borrow from the credit card to pay off the mortgage. Eventually, those bonds will come due, which means more tax hikes for Illinoisans.

This isn’t any type of reform plan. It just moves money around using borrowed funds.

For the record, I did speak to Rep. Batinick and he told me that he’s not in favor of borrowing the $11 billion. That’s good. He also has not seen exactly what the CTBA reamortization plan looks like and just how much it leaves future generations holding the bag.

Which makes Batinick’s partial endorsement of the CTBA plan just plain silly. The CTBA will never support the prevailing wage, collective bargaining or pension reforms that Batinick says he needs to bring down property taxes. It’s just the opposite. They’ll oppose every reform.

And that makes sense. The CTBA is funded by the public-sector unions and they are just protecting their interests. That’s their angle.

All the more reason for Batinick to divorce himself from the CTBA plan.

My colleague, Mark Glennon, has a separate critique of the Batinick/CTBA plan.

It is actually a great and helpful piece of information. I’m glad that you simply shared this useful information with us.
Please keep us up to date like this. Thanks for sharing.

May 24, 2020
The Illinois General Assembly has finally passed an emergency budget for 2021  Tax revenues have taken a severe hit due to the impact of the shutdown in response to COVID-19, yet that hasn’t stopped lawmakers’ spending priorities. The state will spend a record $42.9 billion while bringing in just $36.8 billion.
View Comments (9) | Add Comment