Illinois municipalities are facing average revenue losses of 20% to 30% for the period from March 1, 2020 to July 24, 2020 compared to the same period last year, thanks to the pandemic and resulting recession.

That’s according to a survey conducted by the Illinois Municipal League. Eighty-seven percent of respondents reported shortfalls.

Revenue sources have been hit to different degrees, as shown on the chart below: 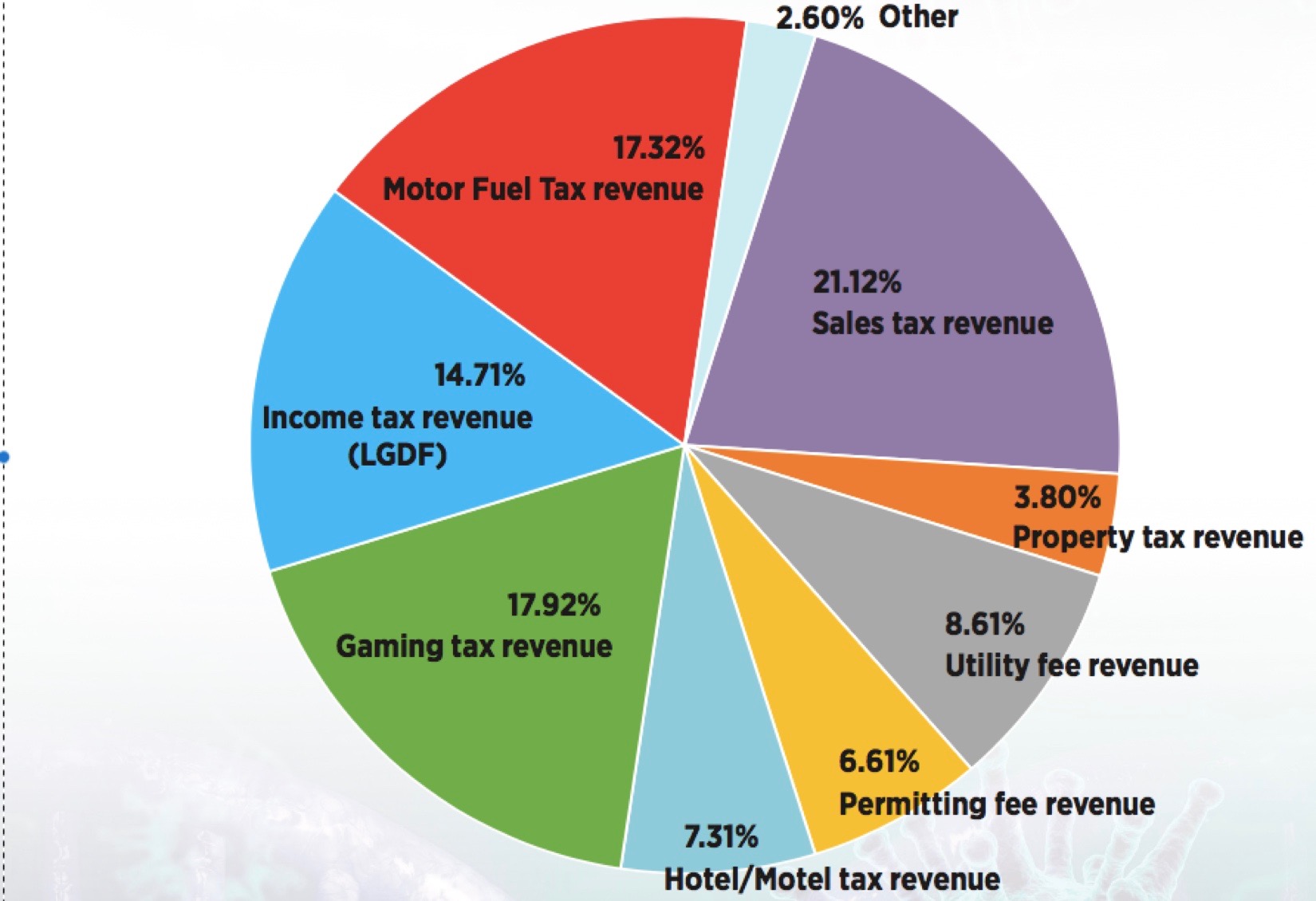 Keep in mind, however, that the COVID recession has persisted after the survey end date of July 24 with no clear end in site, so further impact looms.

Chicago will be a separate story unto itself. We will hear about it as “budget week” kicks off on August 31.

Mark,
One glaring correction that needs to be made. This was not caused by the pandemic, but the decisions of politicians to shut down the economy.

Other than that, nice work!

I hear you. I struggled with how to word that hoping to leave that open to interpretation.

Ben Meng, who just left CalPERS, said the only way for CalPonzi to make 7% annual gains was more leverage and more risk (i.e. private equity). He’s probably the most experienced investor in the world so I wonder what bright ideas his successor will have.

Just keep pulling the blue handle for higher taxes…
Cut funding to every state program 10%, those that can’t survive can argue to take more away from a different program. Let the chips fall, if people don’t like it they can donate to the state.

And in my city the current topic is how much are elected City employees raises going to be.
Does the insanity ever end?

Raise Taxes, when things get back to normal Raise them again.
Screw the taxpayer like always.
Long live Huge Pensions to live in Luxury in Florida.

Gee, I wonder what imaginative solution the cities and towns will come up with.

I recall reading an article where many of these towns’ mayors and boards were essentially financially handcuffed due to state mandates. In other words, public unions had successfully bribed state legislators to make pension rules and other costly union rules so burdensome and unchangeable that there was nothing these local officials could do to get property taxes down. There is no impetus at the state level to allow cities and towns to have freedom of how they run things, so this problem will only get worse. The state has no money to bail them out, which is also why the… Read more »

So assuming the worst happens and Biden wins, the Senate turns blue, the filibuster is blown up and the Democrats pass a trillion dollar bailout for states despite a lot of uproar from red states. Assume that the minority republican senators can at a minimum have the bailout based on each states relative population and not based upon historical irresponsible behavior like the level of unfunded pensions (I know this may be too optimistic an assumption). At just under 4% of the US population, Illinois would get about $40 billion as part of a trillion dollar bailout. My question is… Read more »

Without structural reform, the 40 billion scenario buys probably three or four years time if it all goes to pension and the stock market maintains its valuation. Structural reform is necessary and is the only way to maintain solvency and guarantee payments to retirees. In addition to structural reform, we need revenue. IL should enact a pension surtax for all individuals and businesses. 1% over 100 G, 2% over 200 G, 3% over 300 G. In addition, retirement age need to be raised to 65. Pensions need to be capped at 120 G, no matter salary, indexed to CPI. Any… Read more »

“in addition, retirement age need to be raised to 65. Pensions need to be capped at 120 G, no matter salary, indexed to CPI.”

Those changes are not allowed for current employees or pensioners. Changing those benefits for new employees would actually be an enhancement as they can’t fully retire until 67.

There shouldn’t be a pension, at least move new employee’s into a 401 (like the rest of the real world) but they won’t even do that. JB gave every state employee a raise the day after elected. This is a bought and paid for blue state.

The state would be better off with 401k’s for employees. Then the state would be forced to pay their required contributions each and every year and they wouldn’t be able to balance their budget on future generations. Here’s the thing though. The state would need to start paying into social security (the majority of the pension debt is for employees that do not get social security) at 6.2% of the employees salary. The switch would also never get done politically without providing some type of 401k match. The most common match among corporations (71%) is 50 cents on the dollar… Read more »

401ks were a scam to screw the middle and lower class. Pensions were what built the middle-class.

The problem with the current system are the jerks who leveraged loans against hard-working people’s retirement pensions. You can’t fund what’s owed because you spent it already. Stop compounding this mess and get angry at the cause, find the solution, and don’t cause another cluster at the same time.

Your basic idea about taxing IL pensions is sound to a degree, but the big hurdle in doing any of what you’ve suggested is getting the “Fair Tax” passed to allow the higher income levels to be taxed at progressively higher rates. That’s a HUGE hurdle in itself, let alone doing the pension taxations you’ve outlined. I am amused by all the Democrat poitical ads for that Fair Tax claiming the currently mandated flat-rate taxation is “unfair.” Maybe that’s true to some, but those who are in the higher income brackets in the current flat-tax system have to pay double,… Read more »

Reality has to come into play We the public, the voting public, have allowed the massive spending budgets to continue as if we are at Disneyland. What part of “unaffordable” do people not understand, including the recipents of pension and welfare and social services programs. We should know by now that the high taxpaers are looking for greener pastures and have been for years. We have limited income, period. People talk about the poor business environment, and it is true. We need radical change and it’s not going to happen as nobody wants the flak. someone above mentioned a stock… Read more »

Reality = we are going to have an “oops” moment where we run out of cash.

then reality sets in.

The reason we have crumbling infrastructure, terrible school buildings from the 1950’s, and just about everything else that government owns looking and being outdated is because the public unions take every dollar available. They leave nothing for capital planning and projects, which they assume should be paid out of bonds, rather than saving up out of annual tax revenues. If it’s there, they take it. That’s why nothing gets improved or built here without federal dollars that have strict strings attached. Or, things like the toll road, which has so much money that they have no choice but to spend… Read more »

Your post shows that when a Democrat brings up the topic of the National Debt they certainly aren’t serious because, as you point out, the trillion dollar bailout will make the deficit soar much higher. How sad that a few free spending individual States have the power to take the whole Country down.

It’s all fiat currency anyway. It makes no difference and if you look to Japan and Abenomics, that is where we’re heading. The reason why Abenomics may work in the States is that our nature is to be consumers at any price.

Japanese are frugal and in kind it kills prices and causes inflation.

The liberal/socialist/democrat solution is simple….raise taxes. The alternative solution is also simple….leave Illinois. There is no third option when discussing this state. Other states do have additional options such as cutting spending.

December 1, 2020
Priority No. 1 couldn’t be more clear. Pensions are Illinois’ biggest problem and they cannot be fixed without an amendment to the state constitution. Proceed now.
View Comments (45) | Add Comment

November 30, 2020
Have Chicago’s financial advisors ever shown the mayor and her city council what an extreme national outlier Chicago has become? Do the city’s top officials have any idea just how poorly the Windy City stacks up against the nation’s other major cities? Do they have any clue how much stress Chicagoans live under?
View Comments (17) | Add Comment

November 28, 2020
Illinois has announced $2 billion more in additional borrowing from the Federal Reserve. Only one state or city in the entire country has borrowed from the facility since its inception: the state of Illinois. All others have successfully raised billions from the traditional markets during the pandemic.
View Comments (69) | Add Comment