It’s the deficits, stupid. That’s the mentality the media, the legislature and pundits should have when approaching the state’s massive unpaid bill backlog. Deficits are Illinois’ core problem. A stack of $16 billion in unpaid bills can only happen if the state consistently spends more than it has.

Instead, the political elite is ignoring that problem. They’re focused on the override of HB 3649, a new transparency law that improves the monitoring of unpaid bills, rather than why Illinois has such a pile of bills in the first place.

The real focus should be on ending the corrupt legislative process that lets Springfield politicians spend money more than the state takes in, year after year.

The hoopla around the override of Gov. Bruce Rauner’s veto of the Debt Transparency Act is a distraction. The Illinois legislature overrode Rauner’s veto by a 112-0 vote and that’s provided a lot of fodder for the political class.

Some are treating it as a win for sound governance, while others celebrate it as payback for Rauner signing the controversial HB40. But very few have acknowledged the simple fact that better reporting of unpaid bills does nothing to actually bring down the level of unpaid bills.

For sure, more transparency on unpaid bills is a good thing. I couldn’t get any clear answer on the state’s unpaid health care bills when I put together the 2018 no-tax hike budget for the Illinois Policy Institute. Not from the Comptroller’s Office. Not from Central Management Services. And not from the Governor’s Office of Management and Budget (GOMB). Nobody had a handle on the amount of unpaid bills.

This Debt Transparency Act will fix some of that. It’s sound financial practice to know the state’s unpaid bills by month by month, rather than just once a year. But knowing how much the state owes means little if the legislature has no plan and no intention to stop creating unpaid bills in the first place.

Politicians should not be applauded for simply making the mess they create for taxpayers more clear. There will only be progress when they stop spending more than the state takes in.

Unpaid bills are not a new phenomenon that suddenly demand more transparency. They began to grow before the Great Recession, continued during the temporary tax hike of 2011-2014 and they continue today even after the record 2017 tax hike. Even massive tax hikes haven’t fixed things because they don’t address the state’s real problem: uncontrolled spending. 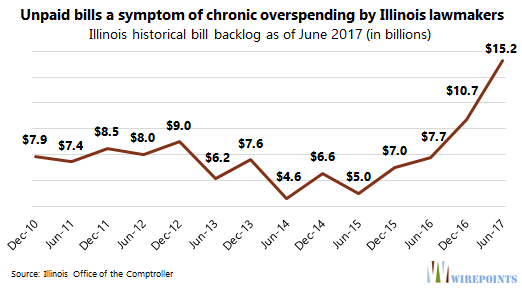 In fact, GOMB already predicts a $1.7 billion shortfall in 2018, meaning unpaid bills are continuing to rise once again.

Illinois has been a deadbeat state for years and a little transparency won’t help if overspending is the problem. The state hasn’t had a balanced budget since 2001, according to the Comptroller’s Office.

And Illinois will likely not have one through 2023, according to the latest numbers from the GOMB. More expected deficits mean Illinois’ unpaid bills will be back to the level they’re at now in just 5 years. That’s assuming a national recession doesn’t create an even worse situation sooner. 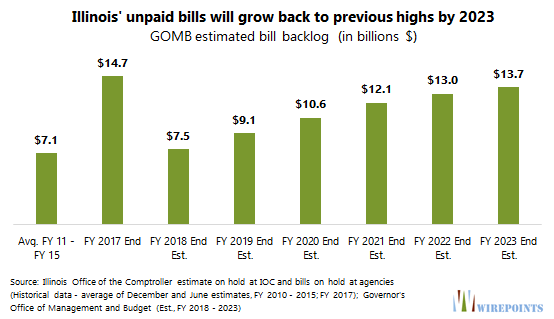 This whole episode and the media coverage around it reveals the problem with the political class in Illinois. The real problems are consistently ignored.

Recently Illinois Comptroller Susan Mendoza asked in a press release: “Don’t Illinois taxpayers deserve to know how much debt the state has run up in their names?”

The better question would have been: “Don’t Illinois taxpayers deserve balanced budgets and an end to the corrupt practice of deficit spending?”