A petition filed in Sangamon County Circuit Court on July 1 seeks authority to proceed with a lawsuit claiming the State of Illinois unconstitutionally issued certain bonds. If successful, it would prevent the state from making any further payments thereon. State officials scoffed, calling the lawsuit frivolous. The municipal bond community was initially alarmed by the filing, but later settled down after a number of its pundits likewise said the suit had no merit.

Chances for the lawsuit to succeed may indeed look slim, but Illinois should be in for an important lesson on whether the framers of the Illinois Constitution really sought to limit excessive borrowing and, more importantly, whether those limitations have been ignored. The plaintiffs are represented by a leading national law firm and they appear intent on arguing the case aggressively. If the lawsuit fails, constitutional borrowing limits will have been rendered nearly meaningless, which is a reason why the lawsuit shouldn’t be regarded as entirely frivolous.

Illinois sold $10 billion of general obligation bonds in 2003 and $6 billion in 2017. Ostensibly,** the 2003 bonds were pension obligation bonds, meaning the proceeds were to be used for pension funding. The 2017 bond proceeds were used to pay down some of the state’s backlog of ordinary accounts payable.

The full court filing challenging the constitutionality of those borrowings is linked here. It’s actually a petition to allow a lawsuit to be filed, which is procedurally required in these circumstances. However, the Complaint that would follow if the petition is allowed is attached to the filing.

There are two plaintiffs on the Complaint. One is John Tillman, CEO of the fiscally conservative Illinois Policy Institute. However, his standing is based on his status as an ordinary citizen and taxpayer. The other is a hedge fund that owns $25 million of other Illinois general obligation bonds. It claims the safety of those bonds is impaired by payments on the bonds it says were unconstitutional.

Article IX, Section 9  of the Illinois Constitution sets out limitations on debt, which is very broadly defined. The full text is copied below. Authorized general obligation borrowing (which means debt on which the state’s full faith and credit is pledged) must fit into one of the four subsections, (b) through (e).

Subsection (b) is broad, authorizing any debt incurred for “specific purposes,” provided three-fifths of both houses of the General Assembly approve, which they did for the bonds at issue. It’s on that section that most of the lawsuit will probably center because that’s where authorization must be based.

Subsections (c) through (e) authorize debt in anticipation of revenues, deficit financing and refinancing with a regular majority vote, though subject to strict limitations on amounts and maturity. They don’t apply here because those limitations would have been breeched if they had provided authority for the challenged bonds.

The central issue therefore becomes what “specific purposes” means in Subsection (b), but it’s not defined in the constitution. The plaintiffs say it “refers to specific projects in the nature of capital improvements, including roads, buildings, and bridges.” As for the real purposes of the bonds being challenged, the plaintiffs say “Simply obtaining cash to finance the State’s structural deficits or to speculate in the market is not a ‘specific purpose.’” The state probably will argue that it means anything specifically spelled out in the statute authorizing the particular bonds. 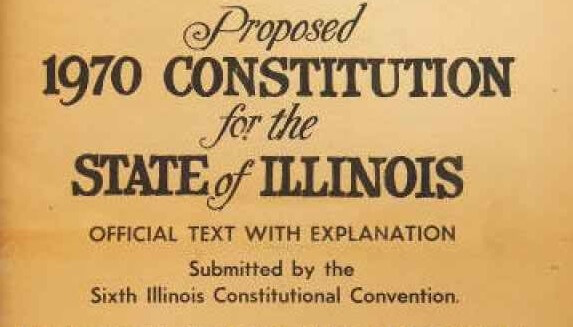 That’s where it will get interesting because both sides will likely turn to the history and comments from the 1970 convention adopting the constitution. Nobody to my knowledge has really dug into this part of the constitutional history to the extent it might be debated in this lawsuit.

That certainly includes me, but I do expect Illinoisans will be surprised at how much more fiscally conservative all sides were fifty years ago. No less than Paul Simon, for example, who went on to become a solidly liberal United States Senator, ran for the 1972 Democratic gubernatorial nomination on a platform opposing virtually all bonded debt. He basically said government should be funded on a pay-as-you-go basis.

One point about the lawsuit seems clear. If the plaintiffs lose, sky is the limit for state borrowing as long as the three-fifths voting requirement is met. The precedent would be set for the state to spend whatever it chooses, letting the unpaid bills run up, to be refinanced by bonds similar to the 2017 bonds being challenged. The state would simply claim the specific purpose was to refinance payables, just as it did in 2017. The state could also just run up pension debt indiscriminately, then borrow to fund them in unrestricted amounts.

But if that’s the result the framer’s intended, why didn’t they just say so? Look at the constitutional provisions below. Does it appear to you that all they really meant was “Borrow whatever you want as long as you have a three-fifths vote”? That would be the implausible implication if the lawsuit fails, which is perhaps the best reason why it shouldn’t be tossed out as frivolous. But if the convention history shows that’s indeed what they intended, well, at least we’ll know that it’s no-holds-barred on taxing future generations through today’s borrowing.

The plaintiffs are represented by White & Case, a very prominent New York-based law firm. They certainly are not known for filing frivolous lawsuits. They do their homework.

Let me be clear that I’m nevertheless very skeptical of the plaintiffs’ chances for success. That’s partly because of my cynicism about Illinois courts. Like many others, I regard our courts as highly political, and the political establishment wants the suit to fail. Furthermore, the suit may have legitimate deficiencies on other matters and procedural issues I haven’t looked into. For example, standing of the plaintiffs likely will be challenged and affirmative defenses probably will be argued that we haven’t seen yet because the state has yet to answer.

But on the central issue important to Illinoisans – what the constitutional limits on state borrowing really are – bring it on. Let’s hear it.

From Article IX of the Illinois Constitution:

Great analysis,,you write ‘If the lawsuit fails, constitutional borrowing limits will have been rendered nearly meaningless’. Will zero borrowing limits send bond investors for the exits ( as superficial as they currently are)?, especially w what currently being talked about for Puerto Rico. Or will bond market continue to gooble up hi-yeild ill debt?

I don’t think investors would run for the exits. They’d then have more comfort that there’s no issue. And, yes, there’s a massive appetite for high yield debt in any event.

All the defendants have to do is argue that it is common knowledge that all Illinois borrowing is to pay current bills, period. And those who loaned them the money ought to have known that fact. Personally I believe this hedge fund knew damn well how the principal would be spent all along. And so did Moody’s, the market makers, and the investors. People are not stupid, this suit seems to think people didn’t understand how the money would be spent and now its sour grapes? It’s Illinois how could they not realize the truth of how the funds would… Read more »

Good analysis. As I was reading I was thinking, “…but the Illinois Supreme Court (and all Illinois Courts) are political animals that are vestiges (as the progressives slowly take over, of which JB Pritzker is one) of the Machine. No way this works, regardless of legal merit.” Then you soberly addressed that point. As I read the Constitutional verbiage, my first take is even more that “set forth specific purposes” can mean anything, as long as it’s spelled out. My reading is that yes, as long as three-fifths agree, they can pretty much spend what they want and maximize debt… Read more »

Your reading could well turn out supported. I do know that some critics of the language at the time feared it would be interpreted that broadly, so the key would be to know if the majority who voted for it agreed, or said they intended something else.