It’s called the Clean Energy Jobs Act. It would put specificity and the force of law behind the core concepts of the Green New Deal spearheaded by Congresswoman Alexandria Ocasio-Cortez.

The Green New Deal has been ridiculed widely even by many on the left and some environmentalists. Primarily, that’s because of the cost of completely eliminating fossil fuels, which unquestionably would be in the trillions for the nation. One estimate puts that cost at $93 trillion. It’s also loaded with pretty much every social justice goal du jour. Democrat presidential possibility Howard Schultz ripped it as “immoral” and “unrealistic.” It would “bring about mass death,” wrote a Greenpeace co-founder.

But others are cheering Illinois’ effort. The Illinois legislation “may serve as a remarkable test case of one of the Green New Deal’s core principles,” says Vox in glowing approval of the bill. And they add, the Green New Deal “is not merely a way to reduce emissions, but also to ameliorate the other symptoms and dysfunctions of a late capitalist economy: growing inequality and concentration of power at the top,” which is why they like the Illinois bill.

Though the Green New Deal calls for 100% renewables in just ten years, Illinois’ target of 2050 would also be catastrophically expensive. That Greenpeace co-founder wrote recently, “You are delusional if you think fossil fuels will end any time soon, maybe in 500 years.” The idea “excites the left,” wrote a Washington Post Columnist, “but that name is a misnomer. ‘World War G” is more like it because it would mean an “endless, unwinnable global quagmire.”

Under the Illinois bill, natural gas would be history. Rip out all those gas ranges, gas furnaces (that heat 77% of Illinois homes) and the rest over the next 30 years. The entire natural gas infrastructure, pipelines and all, would be abandoned.

The bill calls for 40 million solar panels and 2,500 wind turbines alongside $20 billion in new infrastructure over the next decade. One million gas and diesel vehicles would come off Illinois roads.

Meanwhile, record amounts of relatively clean natural gas, produced alongside oil, are already being flared off because it has gotten so cheap. The United States stands poised to displace Saudi Arabia as the world’s largest oil producer and become energy self-sufficient.

The Illinois bill is loaded with social justice goals. There are tedious requirements for a Clean Jobs Workforce Hubs Program; “environmental justice communities”; job creation for ex-offenders and former foster children; “energy empowerment zones”; workforce and training including soft skills and math to ensure communities of color, returning citizens, foster care communities and others understand clean energy opportunities; stipends for jobs and apprenticeships, including funding for transportation and child care; access to low-cost capital for disadvantaged clean energy businesses and contractors; and much, much more.

What’s most annoying is sheer indifference to cost, which is probably immeasurable anyway given the bill’s vast complexity. Don’t expect to find an estimate anywhere. National critics of the Green New Deal immediately asked about cost, but in Illinois, it just doesn’t matter. Broke Illinois would somehow have to pay a proportionate share of the multi-trillion-dollar cost estimates for the Green New Deal.

Supporters of the Illinois bill typically duck the question of cost by jumping to claims of new job creation in renewables. But their job claims invariably are one sided, ignoring lost jobs in the carbon-based industries they would destroy. And the jobs primarily are in the initial installation, which is to say they are temporary.

They cite Illinois’ Future Energy Jobs Act to prove success in job creation. It became law in 2017, imposing less grand targets for renewable energy. It authorized $750 million for job training in that industry. “Now we have a report to prove” how many jobs were created by that earlier law, says Ann Williams (D-Chicago), the new bill’s leading sponsor in the Illinois House. But that’s just 1,500 jobs, she says. That’s success? Watch the whole interview with her to get a sense of the mentality behind this bill. I reached out to Williams for comment but got no response.

Supporters like Williams also claim that renewables are simply cheaper than fossil fuel alternatives. What? If the goal were truly to allow the cheapest alternatives to prevail, massive intervention in the marketplace obviously wouldn’t be needed.

The Illinois bill is loaded with mind-numbing complexity to accomplish its social goals. Here’s one example, which is for preferences in giving out renewable energy credits to “Approved Vendors” that meet multiple “Equity Actions: 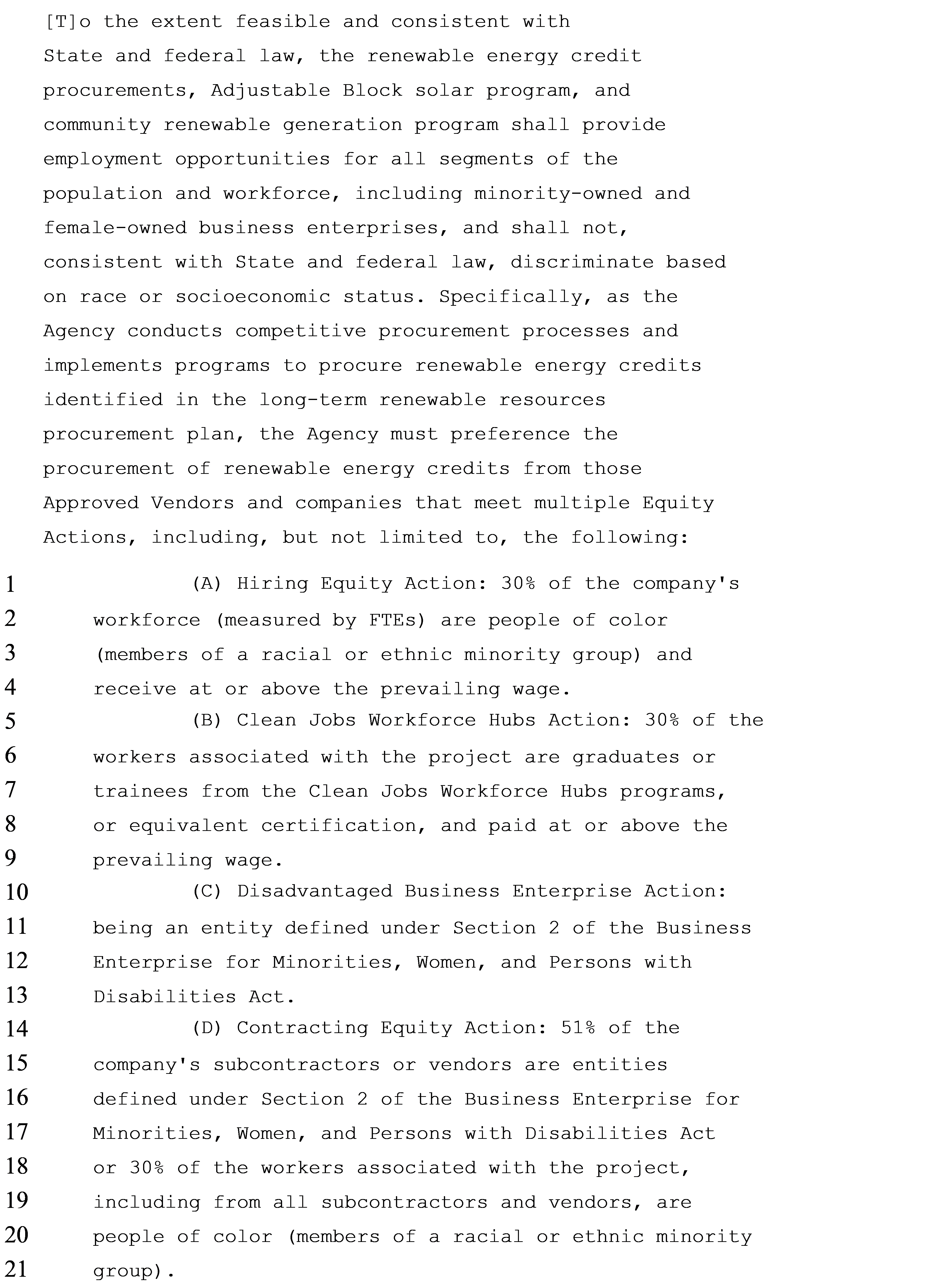 Could it really pass into law?

Companion bills are now pending in both the Illinois House and Senate. Together, they have over 50 sponsors.

Governor Pritzker has not yet commented on the bill. However, in his first days in office he committed to the goal of 100% renewables by 2050. It was not clear if he intended to exclude nuclear.

Perhaps most importantly, the bill is supported by a juggernaut alliance of the renewable energy industry, climate activists, organized labor, farmers keen on leasing land for wind turbines and social justice warriors. That alliance seems intent on challenging the military industrial complex for clout.

It’s represented by a group called the Illinois Clean Jobs Coalition. They’ve already sponsored over 60 community town halls around the state to build support. Supporters include Illinois’ CUB, the Citizens Utility Board, which historically focused on getting lower rates for consumers, but now seems to have been captured by the renewables industry. The renewables industry is heavily unionized in Illinois, so unions like the bill. Its “supporters include Tom Balanoff, president of the powerful SEIU Local 1 labor union, who pledged to do his best to make sure as many union jobs as possible are created, says the Energy News Network.

In short, yes, this looks serious.

Michael Greenstone is a University of Chicago economist who served in the Obama Administration. When asked about the Green New Deal he said, “Wow. Comparisons with New Deal, World War II and remaking American society are not misplaced.”

That’s why the Green New Deal won’t get through Congress.

In Illinois, however, it’s full speed ahead on remaking society through the Clean Energy Jobs Act.

This article is a more detailed version of our Crain’s Chicago Business article on the Illinois bill.

If Cortez were not in Congress the Republicans would have to invent her.

Where did you get the full text of the bill that you are referencing? I do not see it in your links.

It’s the first link near top of the article. On the official state pages, you have to look at the first amendment which is where the full text is. You also have to click the pdf version because it’s too long to display otherwise. http://www.ilga.gov/legislation/BillStatus.asp?DocNum=2132&GAID=15&DocTypeID=SB&LegId=120304&SessionID=108&GA=101#actions

You voted for them, Illinois, now live with it. Don’t bring your madness to our states.

This would be idiotic and impossible for the rural families. I honestly don’t forsee electric tractors, combines etc. I guess we would all be in economic dispair and our state and our country would not have food. Well thought out plan AOC. You are living in a dream world.

maybe I’m a complete dummy, but I googled on a million sites about Illinois Future Energy Jobs Act and can’t find any info on funding? was any part of $750 million commitment ever spent? and what were the funding source?
how would Clean Energy Jobs Act proposed by rep dingbat be funded, oh wait, I know–higher electric bills–sure that will be the solution, thats progressive!
how many tens of thousands of low income chicagoan are getting their water shut off because they cant pay rahms new astronomical water tax.

How clean is your EV? Excerpts from Autoweek: – 82.8 percent of your car’s battery is filled with nonrenewable fuels. – The lithium and rare earth metals take a substantial toll. At the Jiangxi rare-earth mine in China, “Workers dig 8-foot holes and pour ammonium sulfate into them to dissolve the sandy clay. Then they haul out bags of muck and pass it through several acid baths; what’s left is baked in a kiln, leaving behind the rare earths required by everything from our phones to our Teslas.” – Rare earths amount to 0.2 percent of what gets pulled out… Read more »

“They cite Illinois’ Future Energy Jobs Act to prove success in job creation.” Please explain to us the proof of success in job creations? As an Illinois resident all I see is jobs and families leaving Illinois. We have a credit rating of F- as a state and fell to 48th in states maintaing residents. If it were not for an aging parent I would be gone from the liberal hellhole of disastrous policy making we call Illinois.

How ironic that 2/3 of Illinois is underlain by the New Albany Shale, a proven tight oil and gas formation. Imagine the revenue stream the state could unleash if it were serious about developing this resource. Last I checked, most of the state is still off limits to frackers.

Illinois also has enormous coal reserves. Southern Illinois used to be a huge coal producer. I guess these resources will wait for a wiser generation.

Don’t dignify her with the term congresswoman

Nothing is free, you gotta pay, and driving payment is not even considered here, as I see it.

Time for drug testing of the legislature on a regular basis.