While Chicagoans share many concerns over the city’s policing practices, 79% want the police to spend the same amount of time or more in their neighborhoods. That’s one of the key findings of a new Wirepoints/Real Clear Opinion Research poll that looked at a range of attitudes in Chicago on policing, race and Mayor Lori Lightfoot’s performance.

Only 15% of blacks and 10% of Hispanics citywide said they want the police to spend less time in their neighborhoods. 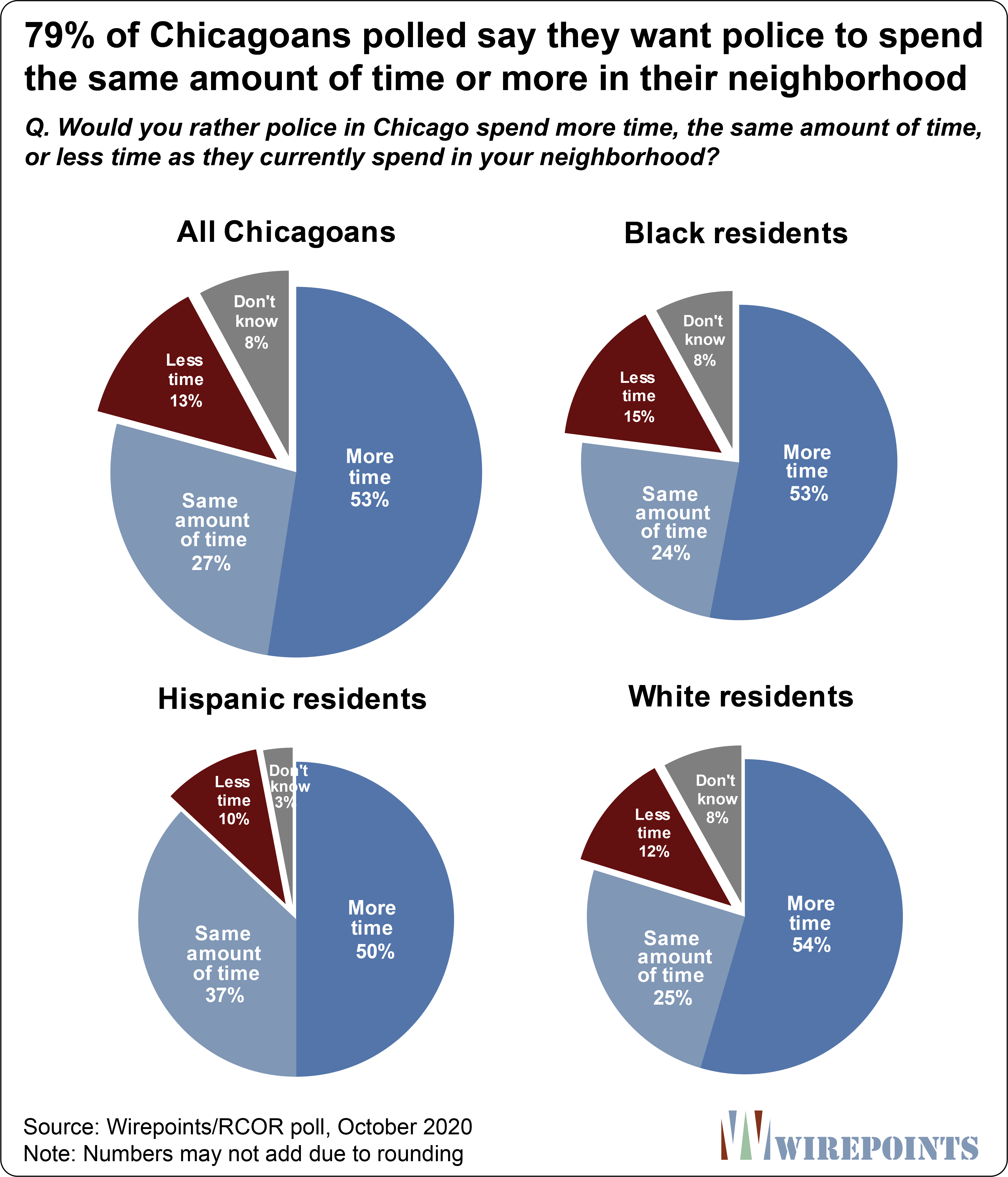 The Wirepoints/RCOR poll surveyed 895 registered voters in Chicago from September 26th through October 4th using a mixed phone and online methodology. The margin of error is +/- 3.28 percentage points at the 95% confidence level.

Although Chicagoans overwhelmingly indicated they want more police, they were also very clear in their desire for better-quality policing. Half (51%) of all Chicagoans polled said they believe the Chicago Police Department is currently handling its job badly. More than six out of ten black residents (63%) held that view.

More than a third (35%) of all respondents felt they would not be treated respectfully in an encounter with police, a percentage that jumps to 54% among black residents.

The polling also finds that while 61% of residents approve of the job that Mayor Lightfoot is doing, some of her lowest issue performance ratings come in how she is dealing with police reform, gun violence and violent crime.

George Floyd’s death and the subsequent protests expanded the influence of Black Lives Matter across the country, including in Chicago. Unsurprisingly, more than three-quarters (76%) of surveyed Chicagoans reported they strongly support or somewhat support BLM. Black Chicagoans maintained the highest support for BLM (86%), followed by whites (74%) and then Hispanics (61%). Geographically, South Side support of BLM is the highest (83%). 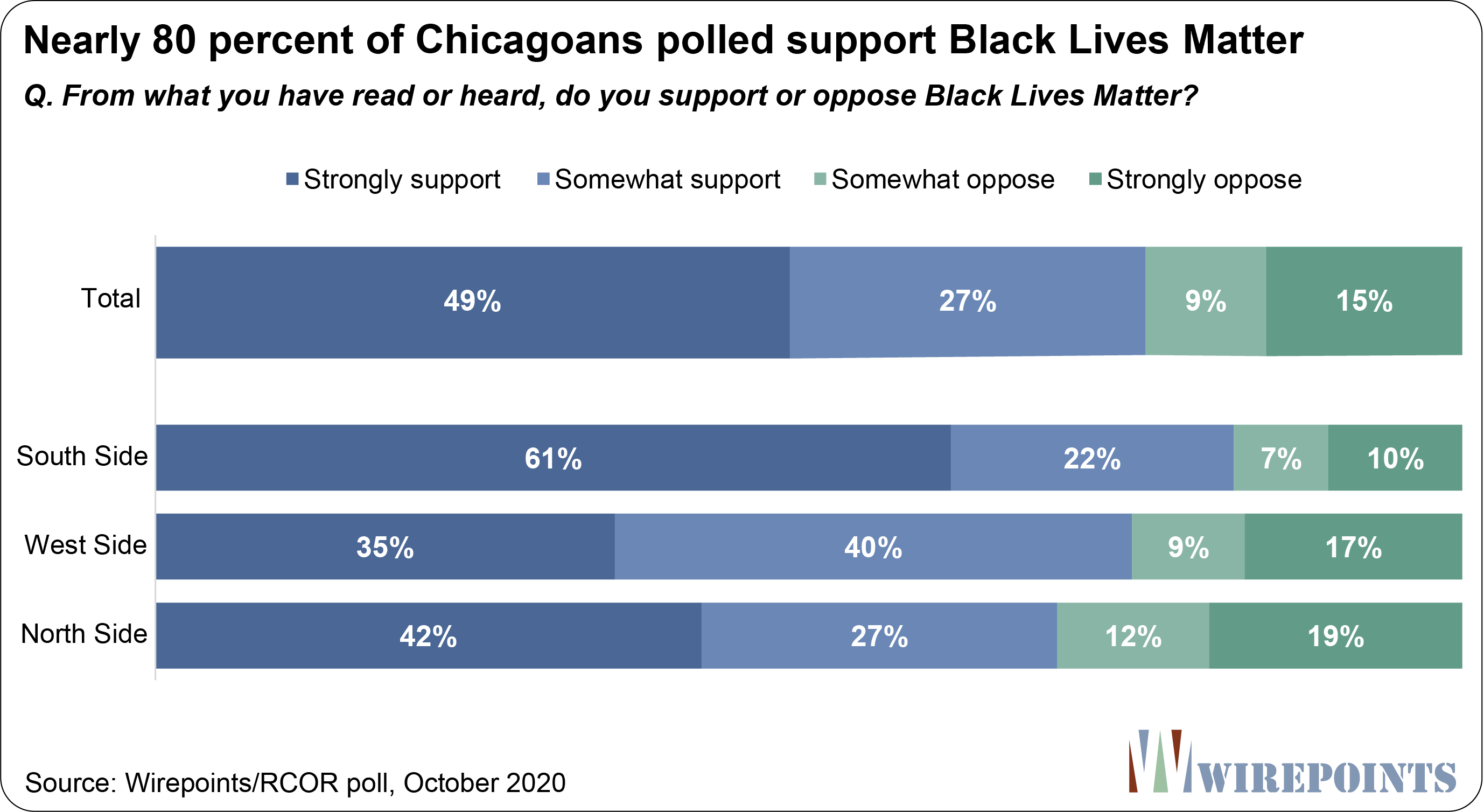 But when Chicagoans were asked directly if they support defunding the police, only 39% said they were in favor, while 51% were opposed. Opposition to defunding exceeded support in every region, with North Side residents expressing the most opposition (57% oppose / 36% support). 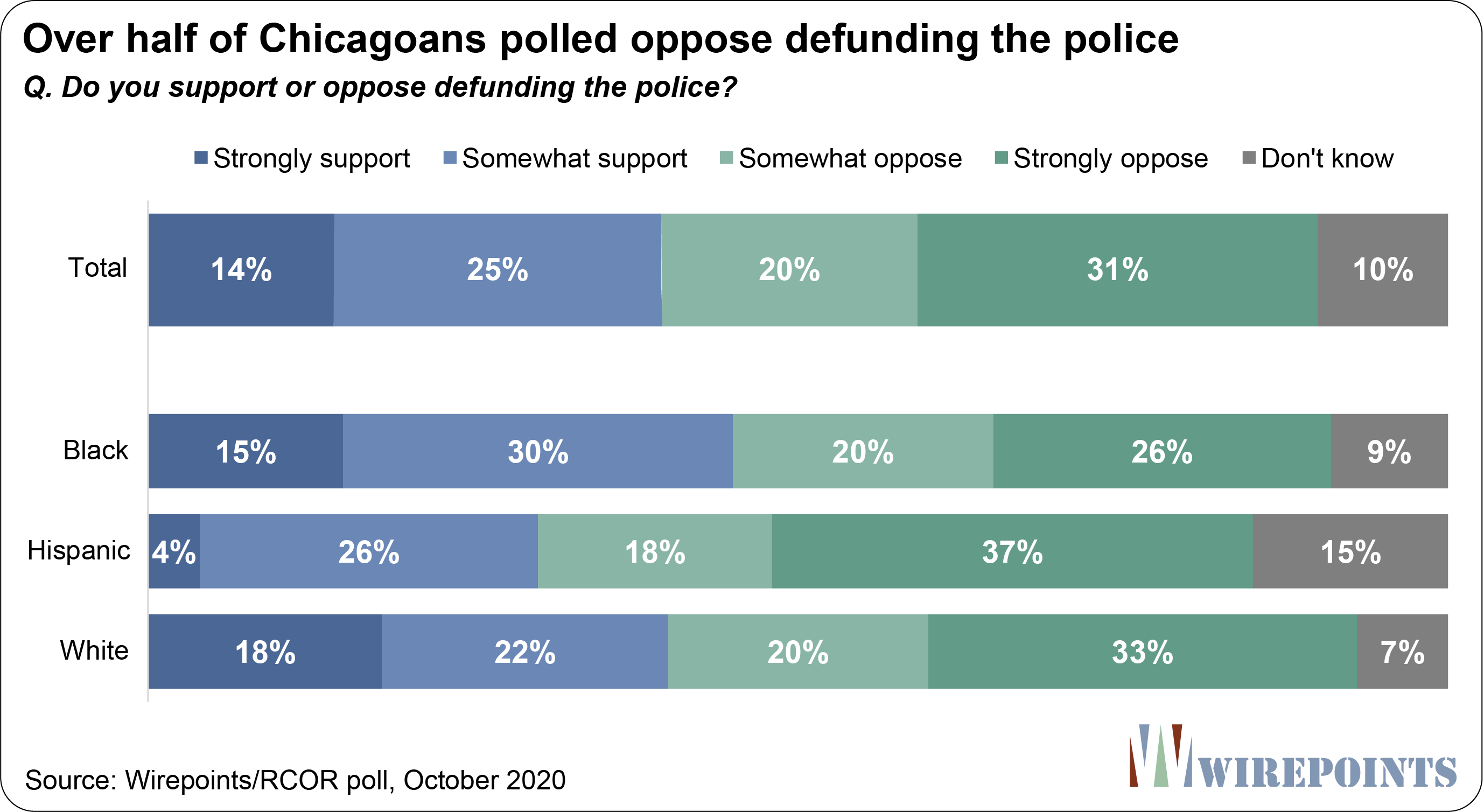 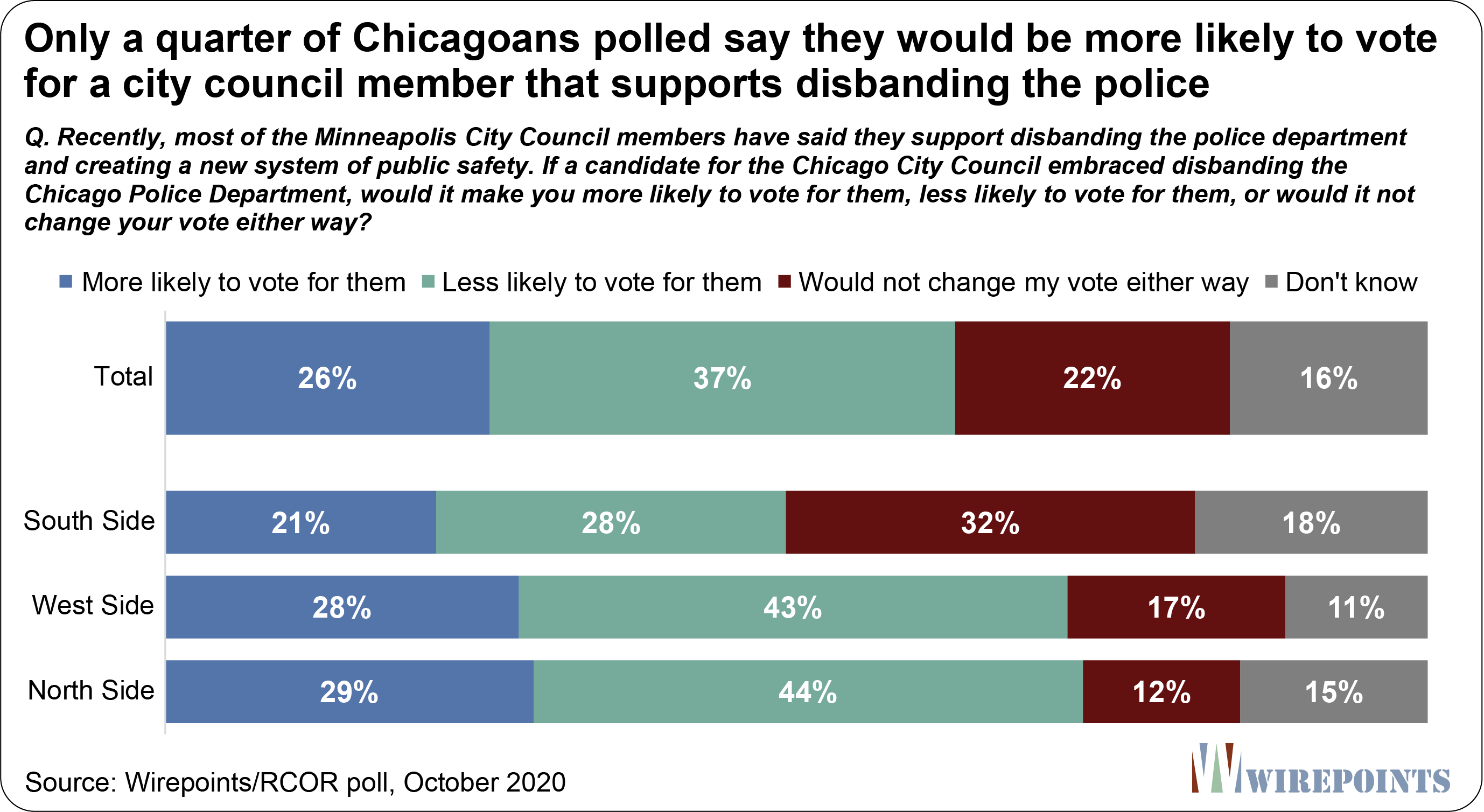 By race, whites and Hispanics were most opposed to politicians supporting disbanding the CPD, with 43% and 41% saying they would be less likely to vote for a council member that pushed disbanding, respectively. Black residents were at 27%.

Instead of less police presence, most Chicagoans polled want more officers on the street. A vast majority (79%) of voters indicated they wanted police to spend more or the same amount time in their neighborhood.

The desire for additional policing was strongest on the South and West Sides, with more than half (57%) of residents in both areas wanting more police presence in their neighborhoods despite their concerns about current CPD practices. The number of Chicagoans polled who want police to spend less time amounted to less than 15% of those surveyed. On the West Side, only 9% of those polled wanted less police. 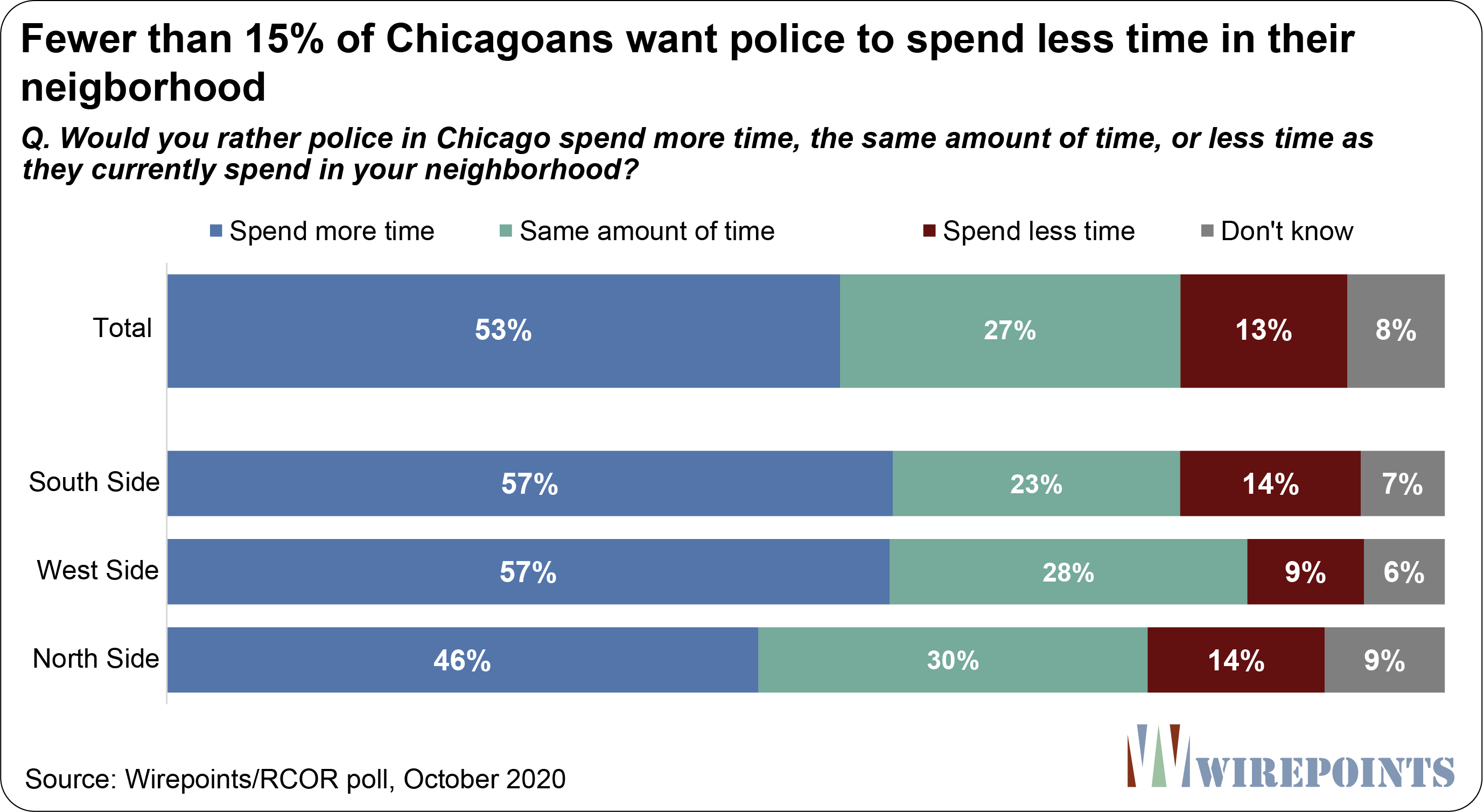 When questioned on a variety of topics, including job performance, systemic racism, police behavior, general safety and more, a majority or sizable minority of Chicagoans showed they have negative opinions of and/or have suffered negative encounters with Chicago officers.

Chicagoans’ overall negative rating of the CPD (51%) varied widely by geography. More than half of citizens from the North Side (54%) and the West Side (51%) said the CPD was doing a good or excellent job, while only 32% of voters from the South Side said the same. 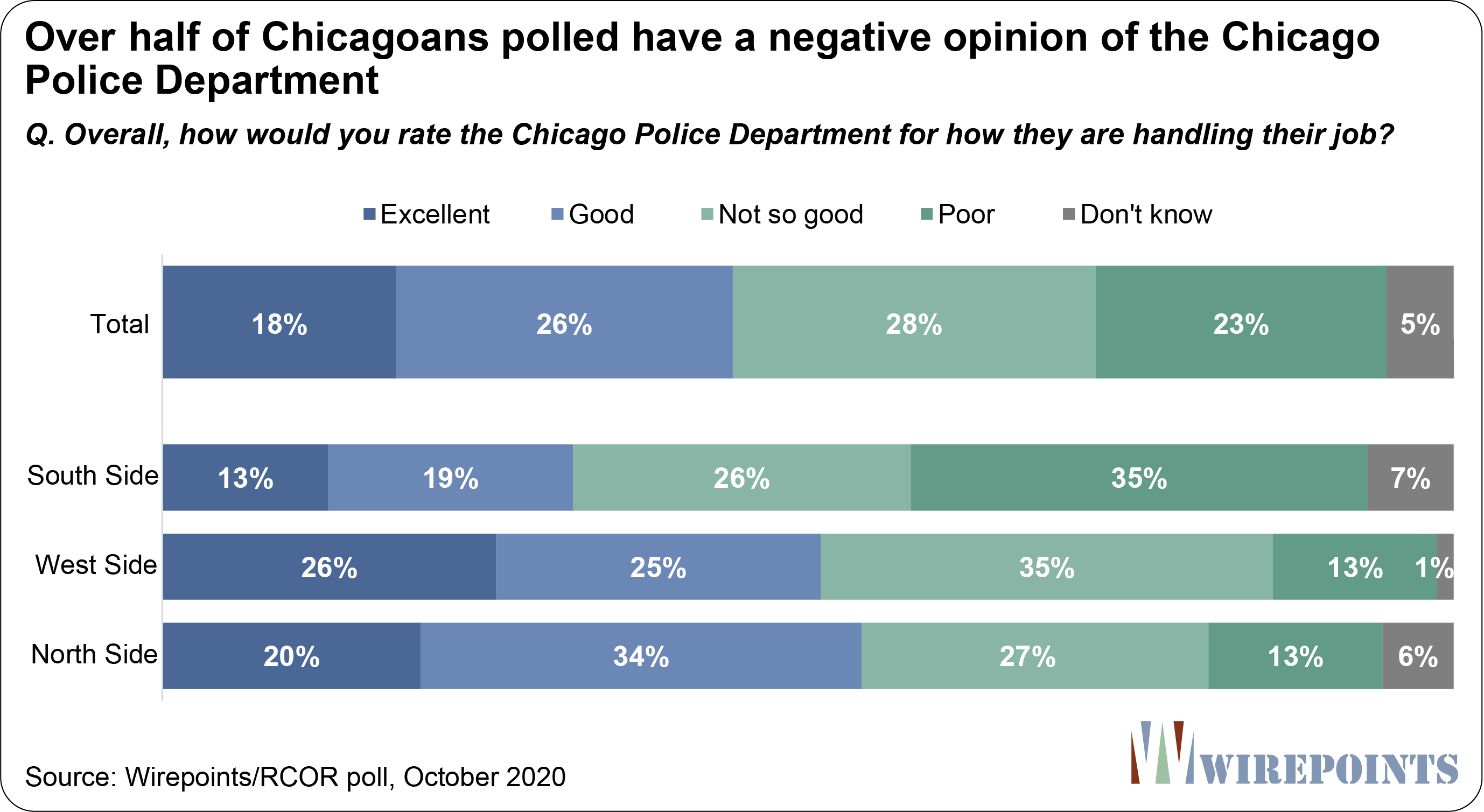 In summary, while white and Hispanics ultimately have a mixed view of the city’s police force, black residents report more negative opinions/experiences: 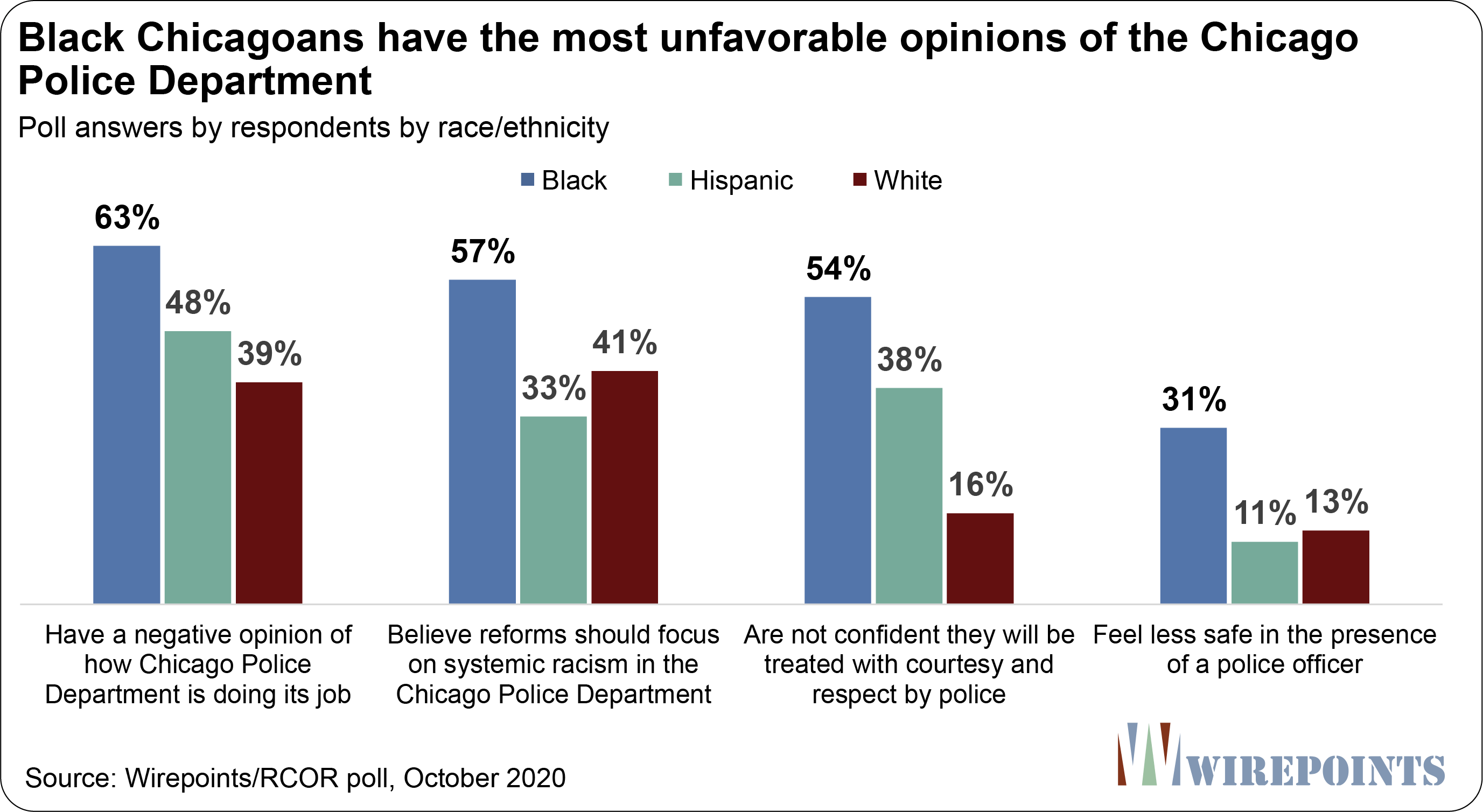 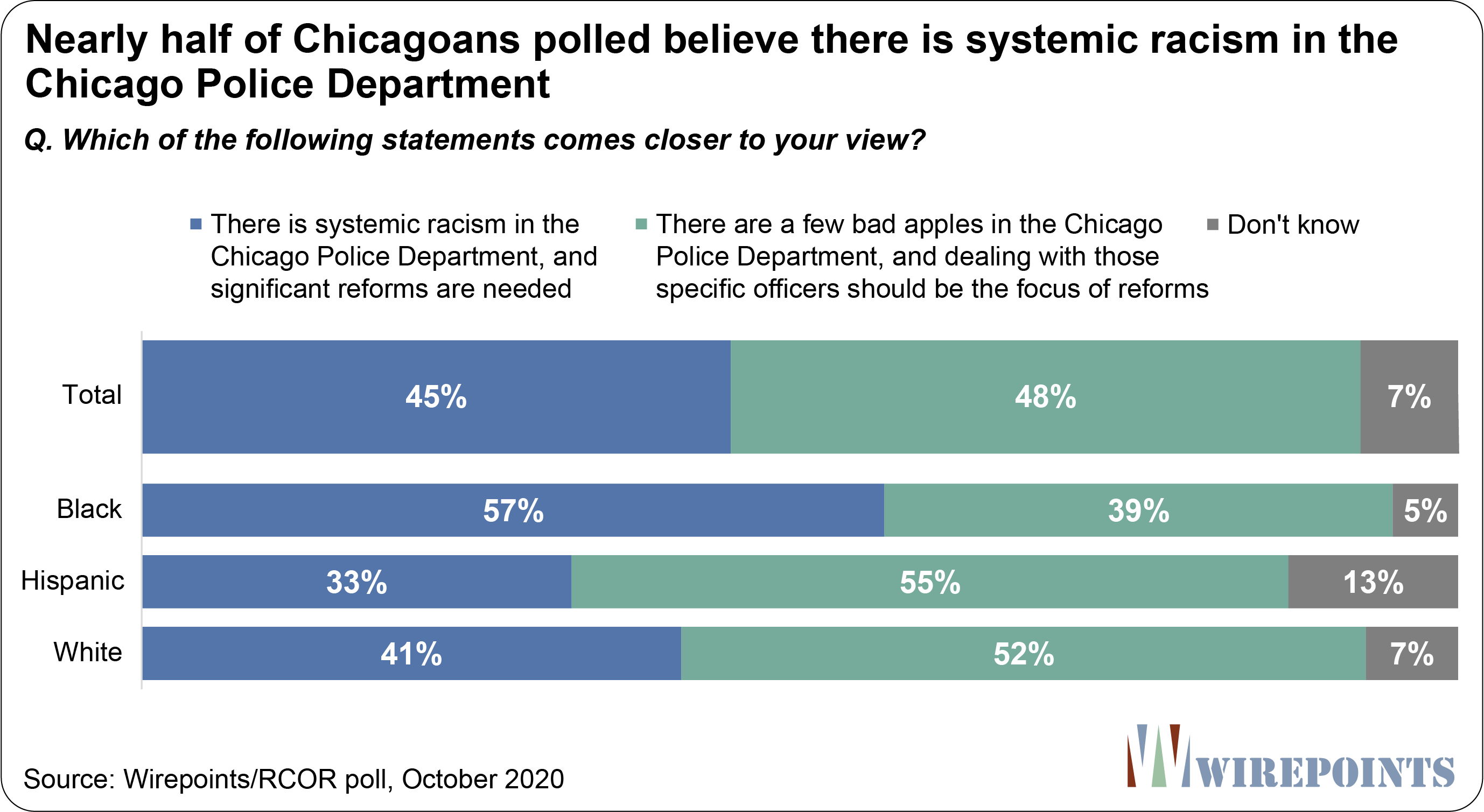 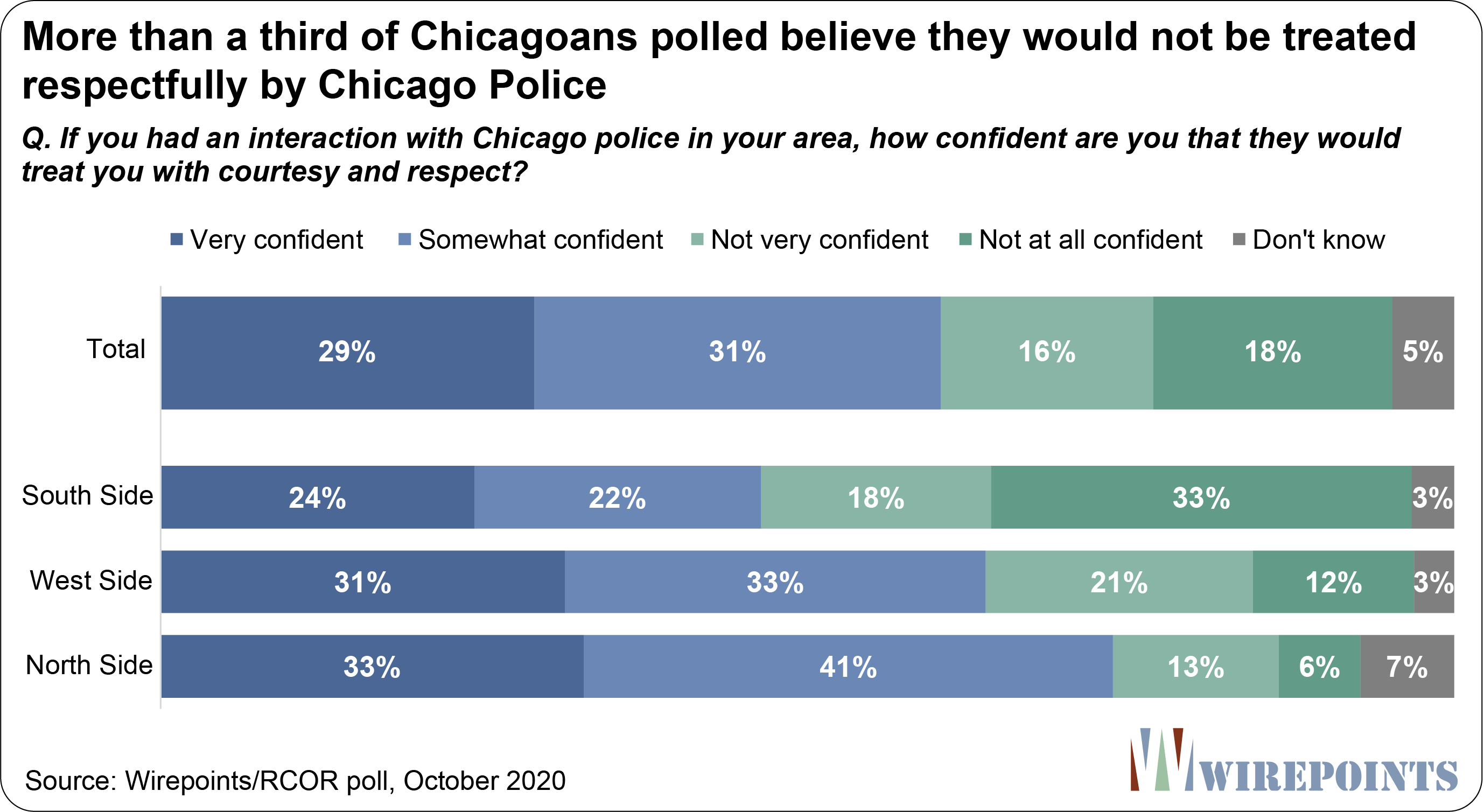 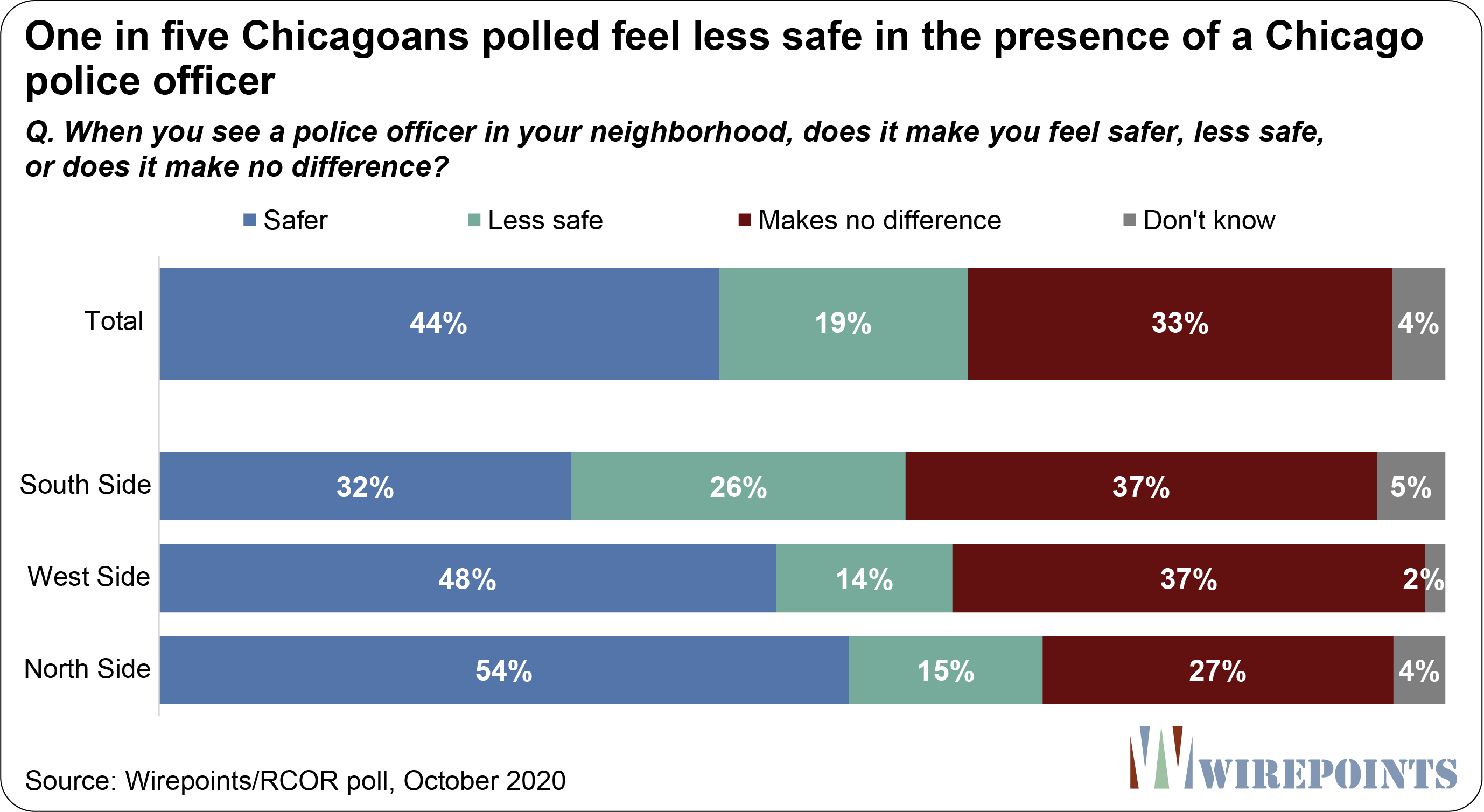 Of the 61% of respondents who approve of the job Mayor Lightfoot is doing, Chicago’s white residents gave her the highest marks (68%), followed by blacks (63%) and then Hispanics (48%).

Her biggest support came from the West Side, where 69% of responders approved of her performance. South Side residents favored her performance the least, giving an approval rating of 57%. 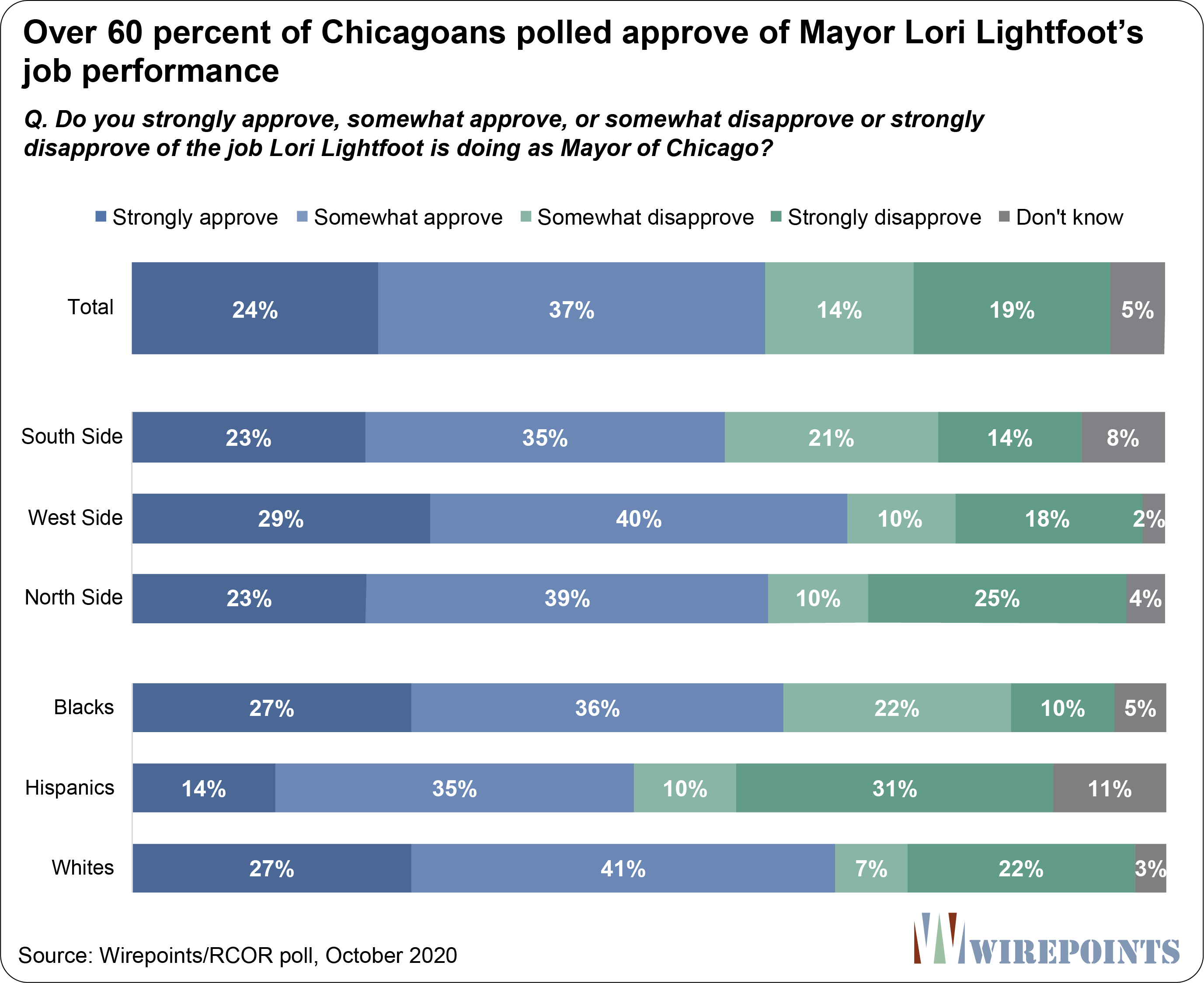 Lightfoot’s handling of public safety has an approval rating of 46%. Her overall approval on racial justice is 44%. On police reform, 39%. And just 31% on gun violence. 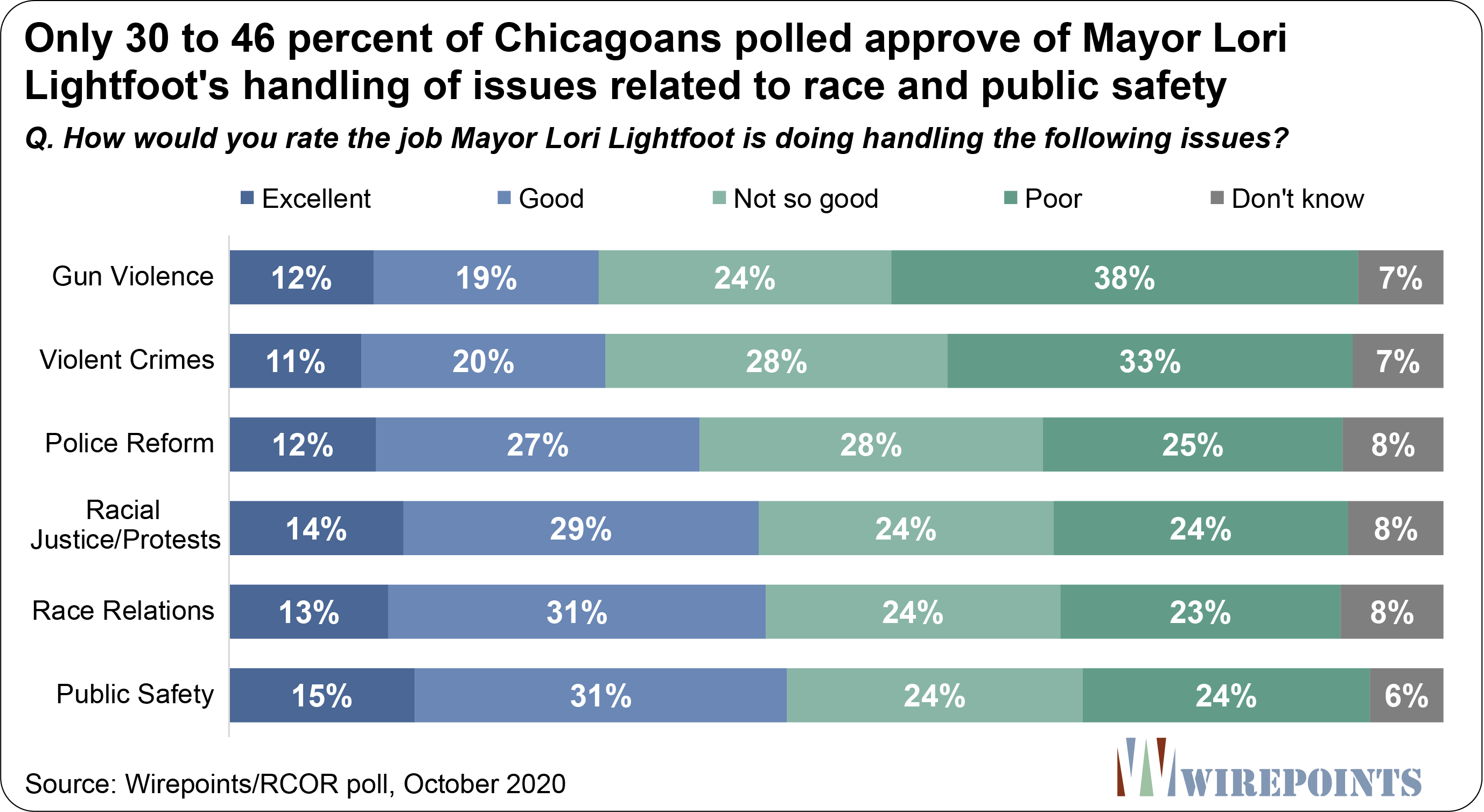 Her lowest approval ratings come from black Chicagoans. Just 26% approve of the way the mayor is handling both violent crime and gun violence. 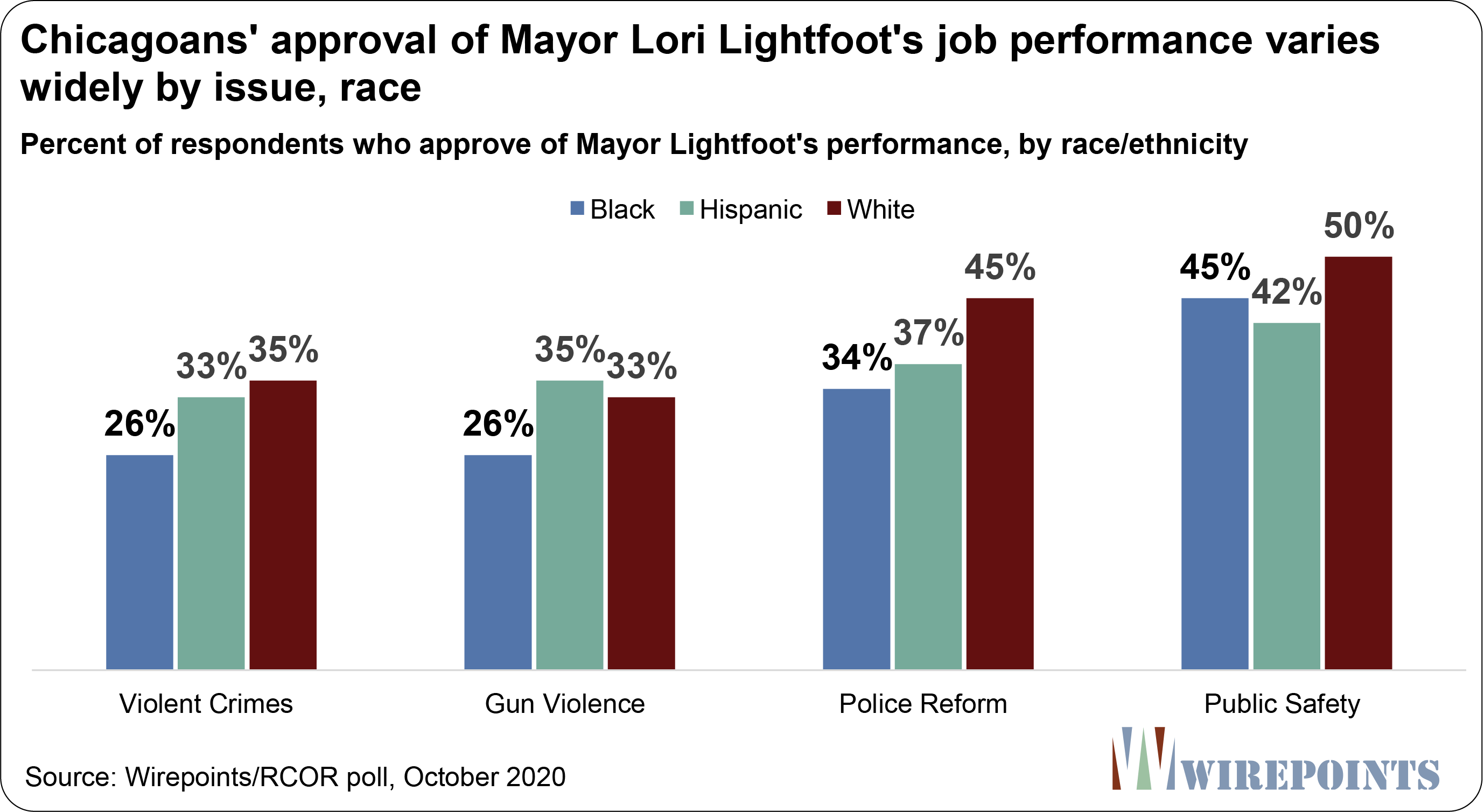 Note: Some poll numbers in this report may not add due to rounding.

In Chicago of the 1950s they gave bums $2 “walkin’ around money” and a pint of wine for a vote. No report on what they gave the corpses. The last Republican Mayor of Chicago left office in 1923. For 97 years the Democrats have run Chicago. “Hey, how we doin’?”  It has turned into a world-class murder capital and is de facto bankrupt. Democrats have the reverse-Midas-touch. They are a perfect blend of Corruption and Incompetence. And yet the ignorant morons keep voting for them. Go figure.

BLM.
Let the suburban whites go to restaurants and risk Covid.
Never believe whites are smarter than anyone else.

I thought you guys were into the data and the science.

The data says blacks and hispanics are a standard deviation below whites and Asians.

When the cops do not do their jobs it pays the same.
So why do what you get paid for?

The cops aren’t allowed to do their jobs. ☹️

I’m sorry. What was the point of this?

We do not need to defund the police, we need to defund the politicians that make the laws that the police are forced to enforce. The “War On Drugs” is a prime example which is nothing but prohibition which Chicago has a rich history, Every time throughout history that you have contraband with a huge profit margin you get the exact same results of violence and murder. The real issue is the politicians have turned the general public into milk cows and a subject that nobody seems to want to discuss.

From the above “… polling also finds that while 61% of residents approve of the job that Mayor Lightfoot is doing,” says a lot about the Chicago situation. With that approval rating nothing will change so perhaps ignoring the situation there is in order.

Yup. That pretty well sums it up. Only solution is to vacate.

More fake polling. MSM has got to go.

She is a failure but thankful I do not live there.
Know people who do and they are leaving as fast as they can

She got a 50% approval on economic development! Who…what?

Is there an estimated margin of error?

The estimated margin of error is in the Poll Topline attachment.

BLM.
Shoot a unarmed black man and collect overtime pay that will spike your pension.
Does not get any better than this.

Shoot a police officer who is trying to protect the public.

Does not get any better than this.

There is misconduct and unacceptable occurrences in any profession.

As evidenced by the hundreds of police shootings in Chicago in 2020….?

You should get a job with the *Lefty Painting Co.*…

They paint with a broad brush too…

He’s been one since I started visiting this site. He’s becoming a bigger one everytime he posts the babble that he posts.

Good article. What I don’t understand is why is it that every time there is a shooting in a black neighborhood the officers who respond are mostly white . If you freeze the picture on TV anywhere in the country count how many police are white vs black or hispanic in any shooting incident. The majority are white. Would more black officers or whatever race in a particular neighborhood be able to diffuse the situation before shots are fired? If not they could call in backup. Is it that difficult to find qualified African Americans to be policeman? Maybe police… Read more »

Eighty percent of success is showing up. How you going to get blacks to be police officers if they can’t even ” show up” being responsible fathers. Let’s start with getting more intact families and Stop with the just more mentoring BS

To do that you’d have to incentivize men and families, and discourage women from being sluts/single moms. We’ve already had 40 years of that anti-family agenda. No welfare for women would require them to make good choices or suffer REAL consequences.

And the fact that it takes two incomes to support a family these days.

The conduct of police is often motivated by justified fear of being killed in performance of their duty and a heightened justified need to be self-protective, especially in high crime neighborhoods and the early release of known repeat criminals back into their neighborhoods. This explains both the pro-police and anti-police positions being voiced. Justice would be advanced is this was allowed to be a legal issue and not converted into a crass political issue to undermine law enforcement and create opportunities for criminals just waiting for cover to riot, loot and kill.

Your cousins in the media sadly promote this destabilization, marxist agenda based on race.

November 24, 2020
The strategy of shutting much of the state down – from lockdowns to school closings – has done far more harm than good, in part because it’s taken health officials’ eyes off of the elderly and the infirm.
View Comments (6) | Add Comment

ABOUT US
© Wirepoints Corp. 2012 - 2020. All rights reserved.
Contact us: admin@wirepoints.org
FOLLOW US
wpDiscuz
28
0
Would love your thoughts, please comment.x
()
x
| Reply