In 2014, I presented to Springfield’s City Council the ominous findings of a pension report I had recently authored. The report warned of increasing stress on Springfield taxpayers due to rising local pension costs. It also warned of worsening work and retirement security for government workers as the local crisis deepened. Springfield ranked 112 out of 114 cities from across Illinois in terms of fiscal health due to pensions.

Springfield residents were already paying a price to make way for rising government worker pension costs. Three library branches had been shuttered and 20 employees cut. At least 24 sworn police officers had been laid off. And residents in neighborhoods with crumbling sidewalks and growing potholes had to wait longer for repairs – the city had 60 fewer public works positions then than it did in 2008.

Unfortunately, the response from local officials to the report wasn’t one of urgency. Instead, the then-mayor of Springfield Mike Houston and most of the city council buried their heads in the sand. They quibbled over numbers – that have since been proven true – to deflect from having to act on the crisis.

Springfield’s situation – and the burden on residents – has only gotten worse since then. Residents need their city officials – beyond just Ald. Joe McMenamin, who has consistently fought for real change – to demand reforms that reduce the city’s growing debt.

In 2006, pension costs consumed only 66 percent of the city’s general property taxes. The remainder paid for the city’s libraries and other core government services.

By 2018, pension costs for police and fire will consume every dollar of those property tax revenues. According to a recent article in the SJR: “For the first time, Springfield will be spending more on its fire and police pension payments in the next budget year than it’s expected to collect in property taxes.” 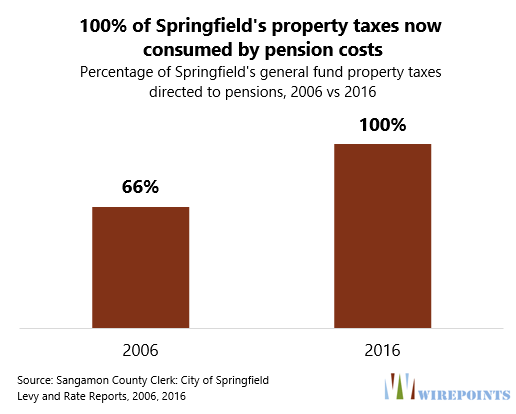 The crowd-out of other services is happening even as taxpayers have significantly upped their contributions into the police and fire pension funds. Taxpayer contributions have grown 140 percent in the last decade, to $19 million from just $8 million in 2005.

Unfortunately, those contributions have failed to make a dent in the city’s pension debts. In fact, police and fire pension shortfalls are actually up 100 percent compared to 2005. In 2016, they exceeded $270 million.

Add it all up and city taxpayers are on the hook for $517 million* in local retirement debt. That’s up from approximately $180 million in 2005.

*(The 2016 debt total is based on police and fire debt numbers as reported to the Illinois Department of Insurance for ease of comparison across cities and time. When numbers from Springfield’s 2017 CAFR are summed, the city’s total 2017 retirement debt is a much larger $631 million.)

IMRF is just 60 percent funded. The police fund has just 54 percent of what it needs. And the city’s fire fund is the worst off. It has just 45 percent of the money it needs on hand today to make future benefit payouts. 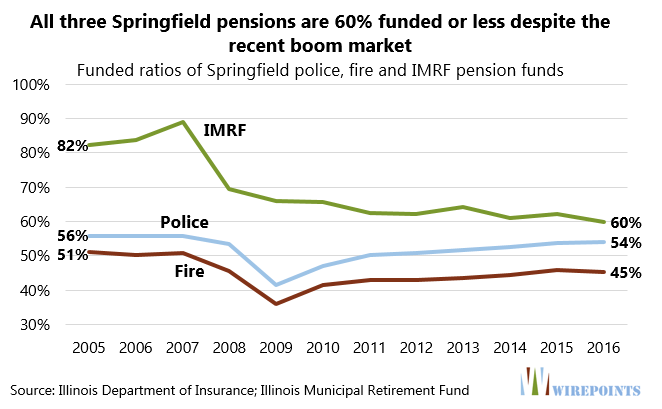 There are several factors that are driving this loss in retirement security. Among them are growing salaries and a falling active worker-to-retiree ratio.

Salaries continue to grow faster than residents can afford. Since 2005, public safety salaries have grown 43 percent. Meanwhile, Springfield private sector earnings have remained stagnant, unable to even keep up with inflation. Inflation was 23 percent between 2005 and 2016, while Springfield household incomes grew just 15 percent. 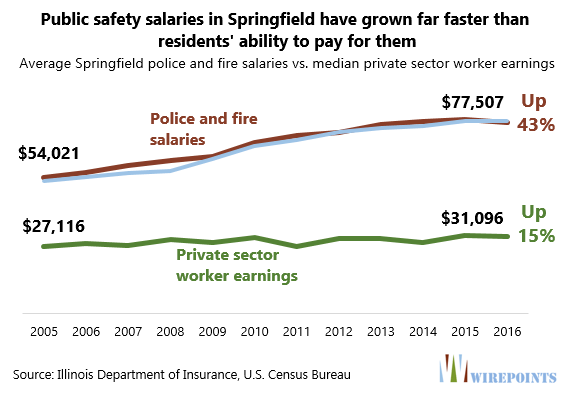 In fact, pension benefits have grown at an annual pace of 6 percent each year since 2005, far faster than the city – and by definition residents’ – ability to pay for them.

Retirement security has also fallen as the number of pension beneficiaries has surpassed the number of active workers. With fewer employees contributing into the funds and more retirees drawing benefits, the fund loses money faster than before.

Back in 2000, there were more active workers contributing to the funds than workers receiving benefits. Today, the opposite is true. There are over 507 beneficiaries today compared to just 469 active workers. 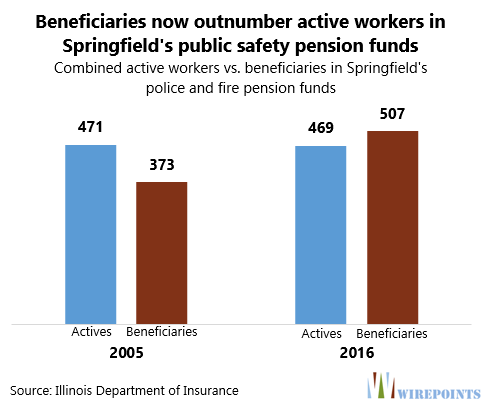 The pension situation will only grow worse as the city lays off more workers and others retire. The city has cut the number of active police and fire workers to save on costs, and there are warnings of even more layoffs to come.

Springfield is just one of many struggling cities

Springfield is just one prominent example of how the downstate pension crisis is wreaking havoc in communities across the state.

And while Springfield’s situation is bad, things are even worse for residents and public safety workers in many other cities across the state. Over 30 percent of downstate pension funds have less than half the money they need on hand today to pay out future benefits. And more than 25 pension funds are less than 25 percent funded.

For some cities, a move to 401ks and decades of belt tightening might work to stabilize and eventually fix their finances.

But with many public safety funds nearing total insolvency, the days for structural pension reform have probably passed many cities by. For those communities, bankruptcy might be the only option that can both protect retirees and allow cities to reorganize their debts.

Without bankruptcy, many cities will be trapped with an insurmountable debt burden that no resident, rich or poor, will want to stick around and pay for.

What exactly is the IMRF court enforced funding guarantee mechanism that allows IMRF pensions to become more underfunded and allows the Springfield IMRF pension to be 60 percent funded.

Does not seem to be working too well if funding levels can decrease and pensions can be substantially underfunded.

The sound from the public union retiree is zip. The sound from current public employees is zilch. Are these people just stupid? They trusted politicians to manage their money…they must be.

The problem is people continue to listen to union leadership and public officials that tell them progressive taxes, financial transaction taxes, and a host of other taxes and fees is all that’s needed to fix the failing pension plans. We need to counter those arguments by pointing out how Illinoisans are already overtaxed, how outmigration is already destroying the tax base, and how public sector benefit growth has far outstripped Illinoisans ability to pay for those benefits. There’s lots more we need to do help the common person connect the dots between the failure in our communities and bad public… Read more »

The main thing to point out is that there are no realistic taxes that come close to paying the pensions anyway. Taxes cannot go up much more in reality for most people. The pensions are doomed.

They know judges and politicians get the same pensions.Why do you think all the well off rich people are running for the Illinois exits?
Do you think those people of color playing wild wild west are going to pay anything?

Substantial increase in immigrant population is the hail Mary pass.

“Without bankruptcy, many cities will be trapped with an insurmountable debt burden that no resident, rich or poor, will want to stick around and pay for.” It isn’t that people won’t want to pay it, it’s that they will not be able to at some point, and you need to start saying so. At some point the pensions will collapse because taxes will not be able to be raised due to this thing called reality.

Move everyone to Social Security