I still remember the smiles on my grandparents’ faces when they described the 1920s. They were in Chicago then, which was perhaps the most rip-roaring center of dynamism and opportunity on the planet in what seemed like the best of times.

I wish I were writing why this decade promises to be the same, but that’s not to be.

Instead, this is the time to address the most frequent theme we see in comments on this site and emails we get, which is the coming resolution of Illinois’ state and local fiscal crisis. That crisis will resolve one way or another over the course of this decade. We know that because simple math says it must.

By “resolve” I’m not implying anything benign. I mean what you readers have called it here – a meltdown, big bang, crash, finale. Call it what you want. We’ve used those terms, too, though sometimes in different ways.

Just “let it blow up” is a common sentiment. Why bother suggesting reforms, many have asked, when the political establishment has no interest in reforms? It’s too late anyway now, with or without reforms, others say.

Here’s our view, which we emphasize because it’s key to our purpose: The meltdown should neither be accelerated by artificial pessimism nor delayed by artificial optimism. A meltdown, however, is both necessary and inevitable.

By meltdown I mean a crash in Illinois’ state and local public sector severe enough to shock the public and the political establishment into drastic reform. If a crash is artificially accelerated by deliberate action or misinformation, politicians would dismiss it as such. Today, the establishment still covers up the depth of our problems — by lying — and it would be a mistake to arm them with something better.

And the meltdown indeed must be severe enough to induce shock, because decades of experience show how impervious Illinois voters and lawmakers are to financial reality.

Based on that foundation, we often propose reforms that aren’t politically feasible for now. If we instead limited ourselves to what’s politically feasible today our work would be pointless. Reform proposals today are best thought of as building blocks that will be needed when the time comes. They must be thought through, popularized and put on the shelf, ready to go.

What form will the meltdown take and when will it happen? Your speculation is as good as ours.

Maybe the federal corruption probes will spark a massive government shake-up in both state and local government. Rumors persist that at least 20 state lawmakers have received notifications that they are federal targets. It’s entirely possible that the Chicago Machine, which still controls the state, could be decimated and decapitated. The risk then, however, is that they’d be replaced by the growing brand of progressives who are at least as fiscally reckless as the incumbents, so the crisis would continue.

Maybe the finale will be sparked by a recession or a natural disaster, or maybe bond investors will panic. Maybe there will be no single bang but a continuing, slow motion train wreck, which is what we suspect. “It’s happening” already, we’ve written before, the latest evidence being new Census Bureau data showing the state lost population for the sixth year in a row. Even a slow burn, however, must culminate in a moment where a majority finally says, “enough.”

One sentiment expressed by some of our commenters — that we reject — is that leaving the state is a universal solution. Some even say that’s a moral imperative. Leaving is entirely sensible for many but it’s simply not a viable solution for countless others.

And whether you stay, leave or are already gone, there’s more at stake than just Illinois. New Jersey, Connecticut, California and maybe others are not far behind us. How we respond to our crisis will provide the lessons for other fundamentally broken models of state and municipal government across the country.

For that reason, a genuinely historic decade is at hand.

Let’s hope that by the end of this decade people of basic decency and common sense will have roared, giving future historians a different reason to call this decade, too, the Roaring Twenties. 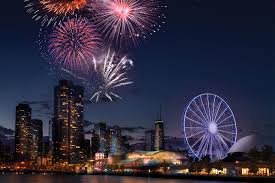 We’re enormously grateful to our informed commenters and generous contributors, so there’s no better way to end this than with a comment left by one who goes by Illinois Entrepreneur:

Happy Holidays, Wirepointers. As infuriating as Illinois is, I’m thankful that I can come here and vent with intelligent people who get it. Perhaps one day our voices will make a difference, but until then, it’s nice to commiserate with like-minded people.

Stay healthy and safe, and I wish all of you happiness during this season and beyond.

Just Leave for a better State, and there are lots of them.

For a new appreciation of the Roaring 20’s, I suggest the movie “1917” which is an astonishing achievement. There is nothing graphic in the movie and no long battle sequences if that’s not your thing. The accepted history is that a whole generation of young people where so shocked by the brutality of WW1 that they became a “lost generation” of the carefree 1920’s. Sounds like today’s lost millennials. I also recommend the book “The Man Who Made the Movies, William Fox”, the long bio of the founder of Fox Studios. The 1920’s were a decade of crooked business deals… Read more »

It is my belief that for many, their job still compensates them enough to overlook the oppressive taxes. Leaving Illinois would probably mean less compensation elsewhere. Others are trapped, staying due to a family health issue. Staying is often logical or simply necessary for some. I get that. I was in a similar situation until a couple years ago. For some however it is logical to leave, yet they choose to stay. They know they could find a job in another state without hurting their financial situation. They simply don’t want to start over somewhere else and be farther away… Read more »

Thanks to the invest in kids act, my income taxes no longer support the state of Illinois.

“If you recognize an organization as being immoral but continue making contributions as a member, what does that say about you? I wrestled with that concept for quite awhile.” This is not something to wrestle with. The state confiscates taxes under penalty of imprisonment. I’m not voluntarily contributing to the state – I am under legal obligation to pay it. All states collect taxes but IL is less competitive because it collects more than our neighbors. This is not some situation where you’re voluntarily contributing to Planned Abortionhood or anything. “Still, they refuse to accept the premise that if you… Read more »

This may be true. As of today a bevy of new tax’s take effect. People will feel the effect in their wallets. This could change people’s perception of the Democrats agenda but how do we vote them out? Many run unopposed/gerrymandering/political maps/sham candidates if necessary? Most of those who vote Dem are recipients of the redistribution (theft) of tax dollars. Pensioners and public union employees and their families are a huge voting block (at least 1.5Mil) now add in welfare/food stamps/Medicaid/etc recipients and we are well over 3 Mil potentially Dem voters on the public dole. Hopefully more will see… Read more »

The pensioner, union employee and public assistance crowd is large, and formidable, but that’s not the entire state. Republicans have won statewide offices, and did well in some areas despite the gerrymandering (and lack of GOP candidates) in local elections. But still, my tune has not changed, the state is going to get a lot worse before it gets better. The pensioner, union employee and public assistance crowd, simply needs to be demoralized, and they need to stay at home on election day, which has happened in the past before. Right now orange man bad irrationally drives them to the… Read more »

When Quinn tried to reform pensions union employees decided to not turn out for him. One of the reasons that Rauner was elected. Why do you think there is no appetite among democrats to go after pensions? Who were the prior Republican governors? Thompson gave pensioners 3% per year compounded increase. Edgar gave us the pension ramp. Republicans have won in Illinois but not by offering fiscal restraint.