The revised cash-based deficit projection for the current year is $3.9 billion, but with a total bill backlog of $10.2 billion remaining at the end of the year.

First, the good news. Revenue for 2021 fiscal year, which began on July 1, has been coming in better than expected. Through the first four months of fiscal year 2021, income and sales taxes exceeded budget forecasts by significant margins, resulting a $1.84 billion increase in revenue forecast from those sources.

That and other adjustments netted out to reduce the projected deficit by about $1 billion from earlier estimates. The state now expects to collect about $39.1 billion and spend about $43 billion.

Longer term projections are more dire, showing deficits of over $4 billion in each of the following four years with the bill backlog ending up at over $33 billion. The full five-year projection is below.

These projections include none of the hoped-for cash relief from the federal government, or further borrowing from the Federal Reserve. The 2021 budget does include repayment of the $1.2 billion emergency loan already borrowed from the Fed.

How will the state fill the current year’s $3.9 billion cash hole? That remains to be determined and negotiated, but the new report includes Governor JB Pritzker’s view that additional tax revenue is needed in addition to spending cuts and federal help:

[T]he Governor continues to believe that cuts alone cannot be the solution and revenue adjustments need to be considered as well. The Governor will work with the legislature to identify corporate and business tax loopholes that can be closed and tax adjustments that can be made that will minimize the impact to lower-and middle-class families while ensuring that Illinois can meet its financial responsibilities. Furthermore, the Governor will continue to work with the Congressional delegation to support additional federal funding to help Illinois bridge the loss of revenues brought on by the COVID-19 pandemic.

The long-term, structural deficits clearly result from more than the pandemic and were projected long before it. Particularly notable in the long-term projection is the huge total in unpaid bills — $33 billion by 2026. That unpaid bill balance has already been creeping up in recent months and now totals $7.86 billion.

Keep our usual warning in mind. Like all government budgets, these new projections are only about cash going in and out. They ignore growing debt, including growing unfunded pension liabilities, which are Illinois’ biggest problem. Illinois may fill its budget deficit as it usually does, but its true books haven’t been balanced since 2001. 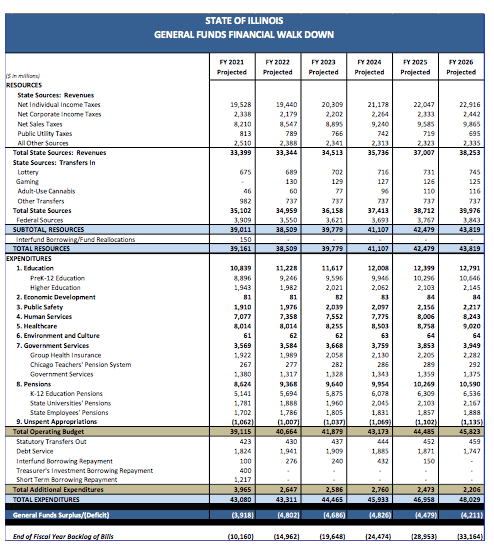 The unpaid billl balance is currently at over 9 billion and heading to 10 billion by the end of the year. This is in addition to a nearly 4 billion deficit this year. What I don’t comprehend is the general state of reporting on this issue. The state takes in around $39 billion a year, and yet, not even taking prior deficits into account, they are in the hole to the tune of 14 billion dollars (the State thinks it can use vendors owed money as a bank, but there are huge interest and carrying costs with that strategy). Plus,… Read more »

With Illinois steady declining population, why is education spending rising? Per student expenditure is naturally increasing with a smaller population – there should be NO need for extraordinary increases.

Subsidize bad behavior and you will get more bad behavior. Sorry to offend, but I hope illinois falls flat on its face as it will be a warning to all states to take fiscal responsibility and not act reckless.

I love the clown world sarcasm; great stuff Tom. What a joke modern america, judges/lawyers are.

I love the first line of their press release–“Despite making substantial progress…”– blah, blah, blah. Is this a joke? What progress? With obvious buffoonery like this even the slow witted Illinois public will hopefully catch on.

Seriously, that’s something you’d hear out of a women’s book group for a Pritzker diet/plan. “Despite my BS, I’m still a fatass”. But don’t look, emperor’s got no … oh wait …

Will somebody please run for Governor on a platform that says the State will declare bankruptcy so we can get this over with over with an move on. If I am business that is owed part of that $7.86 billion I would assume at best, I would only get a partial payment at best anyway.

The alternate reality of the Demsheviks. Enjoy.

So if I’m understanding this, Illinois has a huge shortfall even if you ignore the pension crisis.
Next, maybe someone can help me understand why anyone wants to live in Illinois.

Any updated prediction? Does this get FED – bought eventually, but only after services go to all time lows?

Many are fleeing which I will be doing soon also ….

November 23, 2020
The strategy of shutting much of the state down – from lockdowns to school closings – has done far more harm than good, in part because it’s taken health officials’ eyes off of the elderly and the infirm.
View Comments | Add Comment

November 23, 2020
While school openings have become heavily politicized in recent weeks, the good news is that more experts on all sides agree schools should strive to reopen and stay open.
View Comments (3) | Add Comment

November 19, 2020
Mamie Cosey and her family are victims of a growing malaise impacting cities across Illinois, where residents are taxed out, services are being slashed, police and firefighters are losing their jobs, and public pensioners are losing their retirement security. A recent law that garnishes city tax revenues to pay for pensions is making things worse.
View Comments (20) | Add Comment

ABOUT US
© Wirepoints Corp. 2012 - 2020. All rights reserved.
Contact us: admin@wirepoints.org
FOLLOW US
wpDiscuz
15
0
Would love your thoughts, please comment.x
()
x
| Reply