Expect the Chicago Teachers Union to try and bully new mayor Lori Lightfoot as teacher contract negotiations heat up. The current contract expires at the end of June and the union is already pushing Lightfoot to strike a deal quickly.

The CTU is used to having its way, especially after it pushed Rahm Emanuel around for eight years. Emanuel gave into the CTU’s demands early on in his first term and he never recovered after that. As a result, CPS’ finances struggled for years and the district’s credit rating remains deep in junk territory.

The problem is, Lightfoot has nothing to give. Chicagoans are already overtaxed and overburdened. The teachers’ pension fund still faces a $25 billion shortfall, according to Moody’s. The City of Chicago alone is already running a $700 million deficit this year. And the city’s population is shrinking. Windy City residents simply can’t afford the union’s usual demands of higher salaries and increased benefits, let alone their new demands. They want affordable housing for teachers, guaranteed sanctuary status for undocumented students in classrooms, and the hiring of even more support staff.

The union wants all that despite the fact that Chicago educators are already some of the nation’s highest-paid teachers of any large district and their pensions far exceed what ordinary Chicagoans get in retirement. Not only that, but the district is constantly losing students.

Lightfoot needs to stand up for ordinary residents who are struggling to make things work in Chicago. Structural reforms are the only way to fix city finances without driving even more people away.

Here are seven facts Mayor Lightfoot should use when negotiating with the teachers union:

1. Chicago teachers are already highest paid vs. similar districts in the nation.

Chicago teachers are the nation’s highest paid when compared to the largest school districts with traditional salary schedules, according to data from the National Center on Teacher Quality.

For example, a Chicago teacher with a master’s degree receives $80,000 a year after ten years of work. In contrast, an equivalent teacher in New York City makes $70,000 and a Los Angeles teacher makes $60,000. 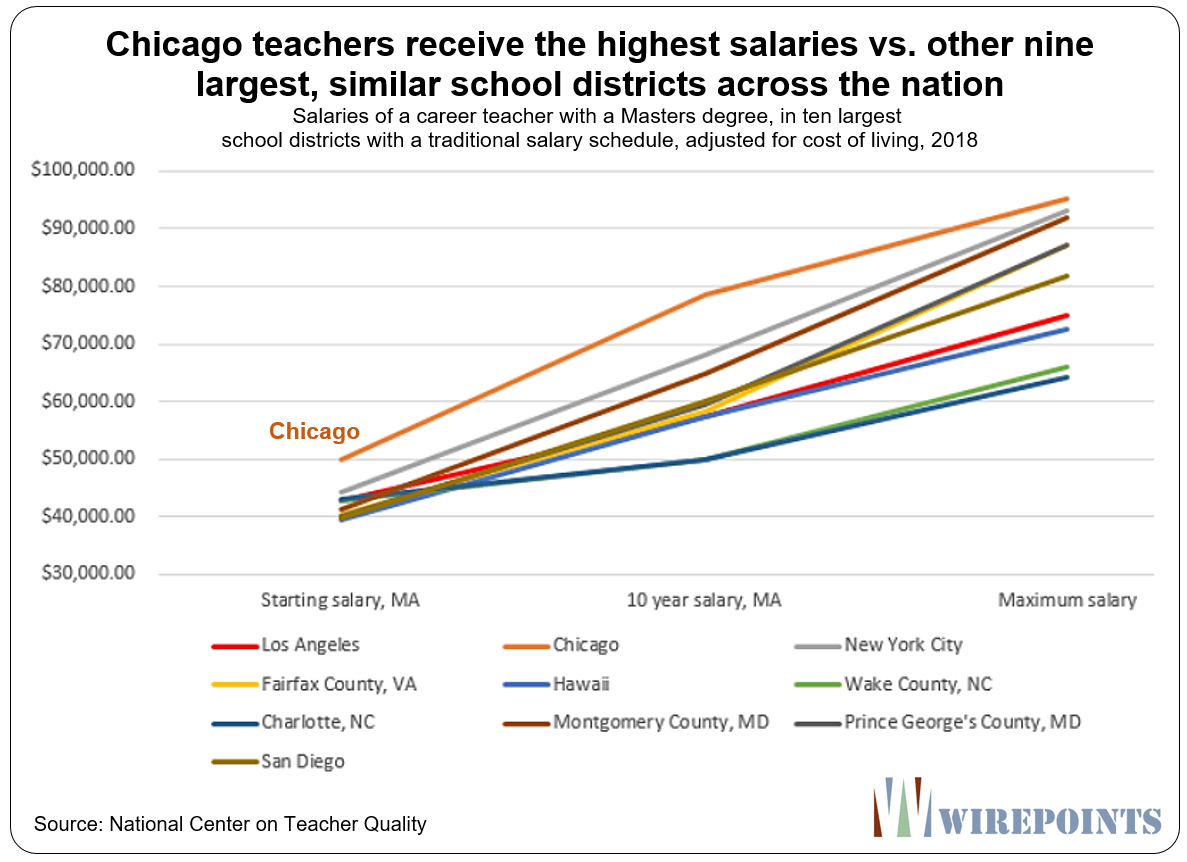 A big reason for that is due to how fast Chicago teacher salaries grow. The average new teacher with one to four years under her belt starts out with a salary just above $50,000. By the time that teacher reaches 10 to 14 years of service, her salary grows to more than $85,000 annually. 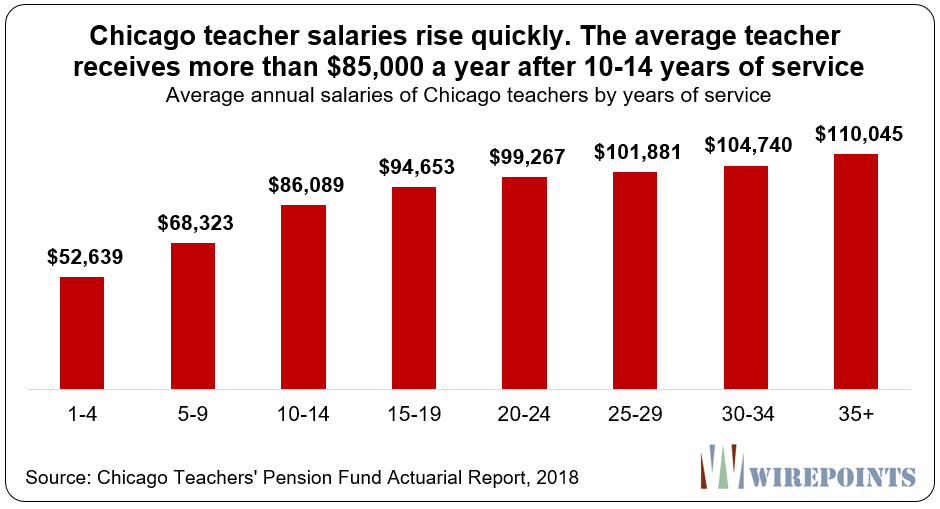 High salaries translate into big pension benefits for career teachers. The average CPS teacher who retired in 2018 with 30-34 years of service had a final average salary of nearly $98,000 and a starting pension of over $70,000. Their average retirement age was 61. 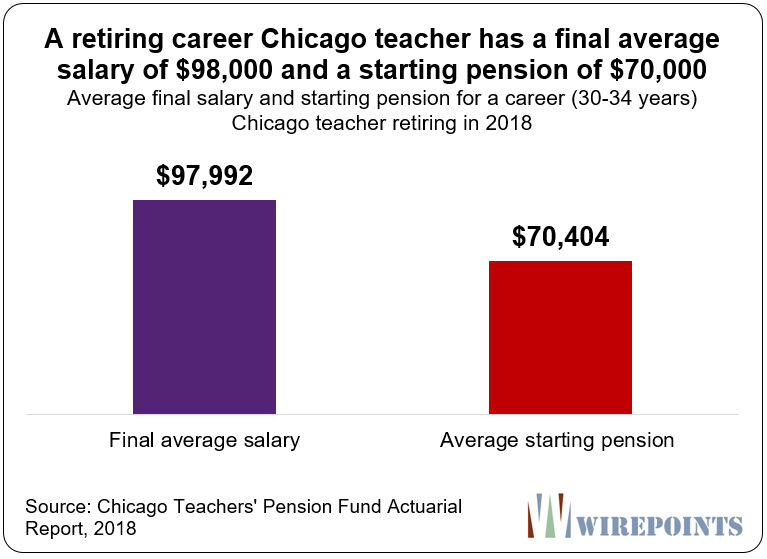 That pension will increase automatically by 3 percent each year and by year 25 of retirement, the pension will be double its starting amount. In all, the average retired career Chicago teacher will collect over $2.1 million in benefits over the course of her retirement.

In contrast, an ordinary Chicagoan at retirement would need to have around $1.5 million in his or her retirement account to collect the same amount of benefits as a career Chicago teacher. Most Chicagoans will never save that amount of money.

3. Chicagoans are still “picking up” a majority of Chicago teacher pension contributions.

Not only do Chicago teachers receive millions in pension benefits, they contribute almost nothing towards them over the course of their careers.

Chicago teachers are supposed to contribute 9 percent of their salary every year towards their pensions. But every year since 1981, CPS has paid for, or “picked up” 7 of that 9 percent.

That means Chicago teachers only have to pay 2 percent of their salary towards their own pensions every year. That costs Chicagoans over $100 million a year.

Rahm tried to reform pickups in 2016, but he was rebuffed by the union. Only new workers lost the pickup. And even then, the district gave out extra 3.5 percent raises in exchange.

Mayor Lightfoot should demand a complete end to pickups without giving any raises or other benefits in exchange. It’s only fair that teachers actually contribute their own share towards their retirements.

4. Each Chicago household is already on the hook for $143,000 in retirement debt. Higher teacher benefits will add to that burden.

The Chicago Teacher Pension Fund (CTPF) and Chicago’s four city-run pension funds are in dire fiscal shape. CTPF has just half of the money it should have on hand to ensure it can make benefit payments now and in the future. 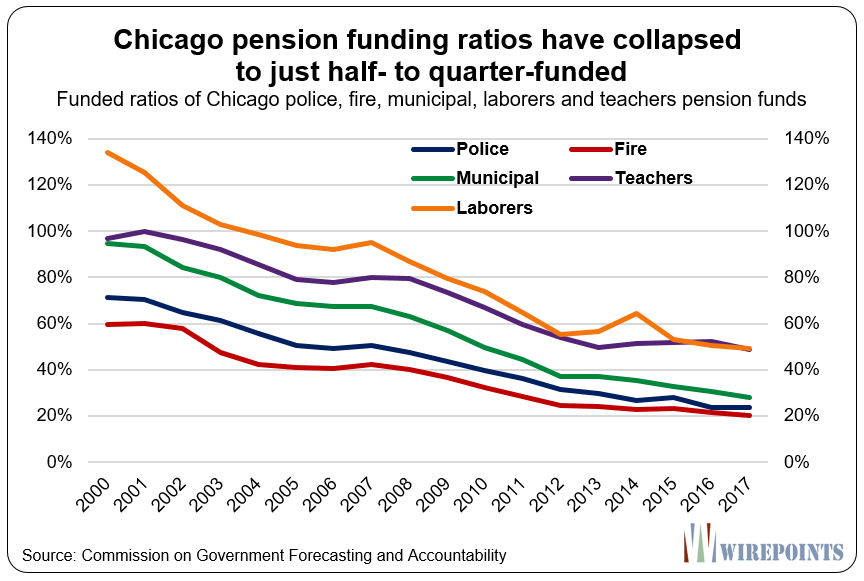 Official reports put the fund’s shortfall at more than $11 billion, but Moody’s says the shortfall is actually $25 billion when it uses more realistic actuarial assumptions.

Add up all the Moody’s-calculated pension debt from the city, the school district, sister governments, Cook County and the state, and each Chicago household is on the hook for nearly $145,000 in overlapping retirement debts over the next three decades. 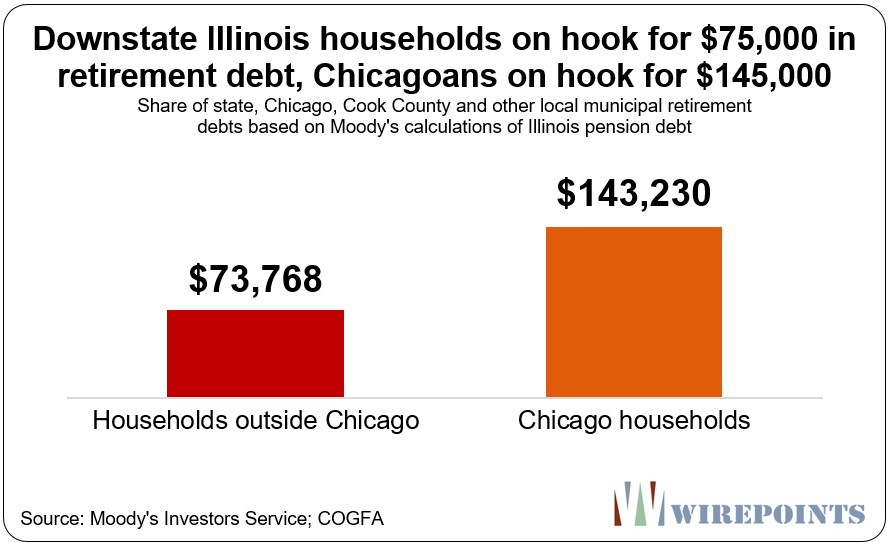 That’s impossible for Chicago households to pay. Granting higher salaries and benefits to teachers will only burden Chicagoans even more.

5. CPS is losing students but spending more on them than ever before.

One of the CTU’s contract demands calls on CPS to spend money to hire more teachers and even more support staff. That might make sense in a dynamic, rapidly growing city with a growing school population.

But CPS is losing students and has been for nearly 20 years. At the same time, the district’s spending per student has jumped.

In all, CPS’ per student spending has doubled since 2000 according to ISBE, even as the district’s enrollment has fallen by nearly 75,000 students, or 17 percent, over the same time period. 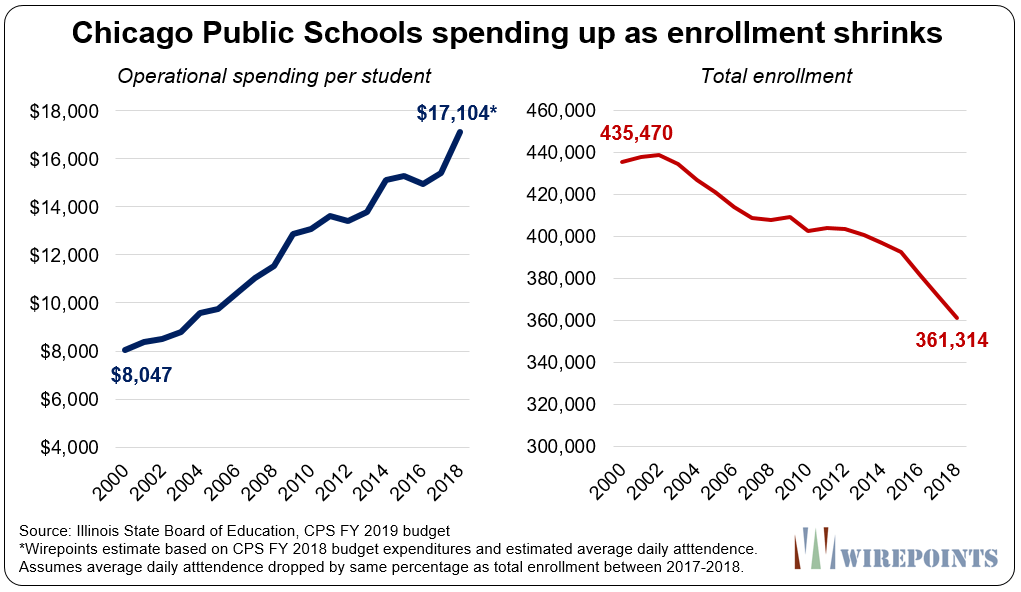 CPS’ operations should be reformed so it can better teach with the resources it already has, not add even more spending to a shrinking, financially troubled system.

6. Near empty, failing schools should be closed and their resources redirected.

In 2017, the Chicago Tribune examined the demographics of some of the most underpopulated schools in Chicago. It found the enrollment of the 17 worst schools has dropped from nearly 20,000 in 2008 to just over 4,600 today. Their buildings are, on average, filled to just 20 percent capacity. 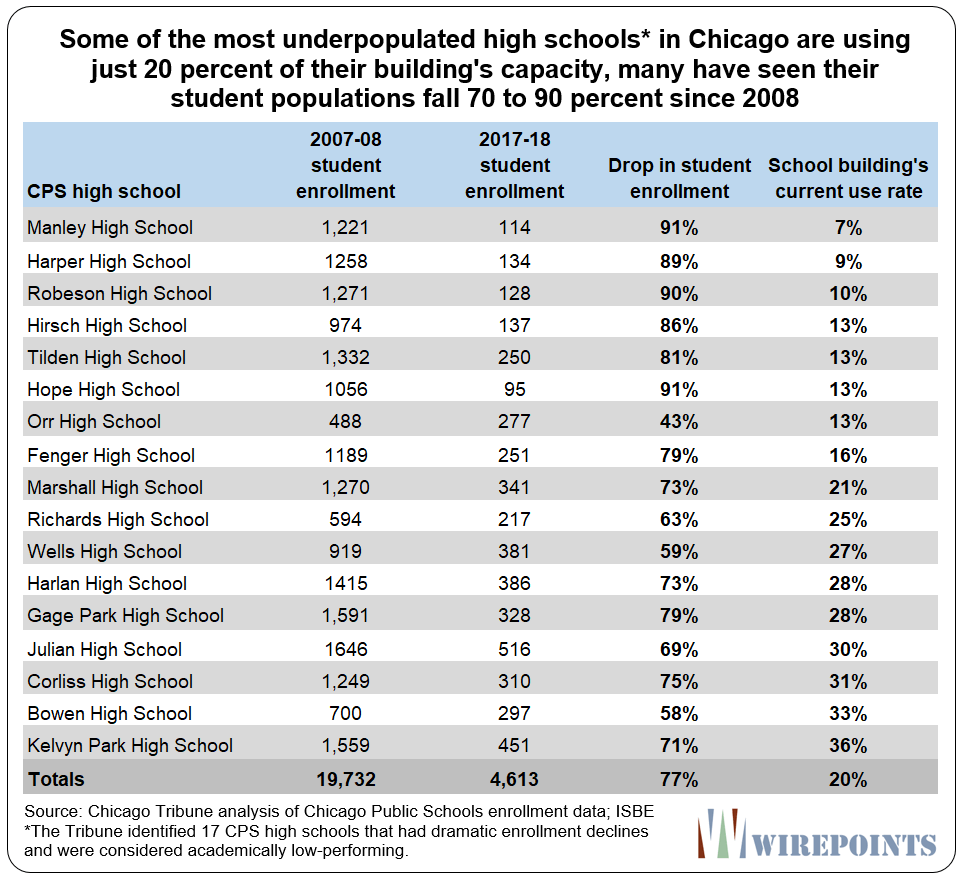 And the few students that do attend aren’t getting a good education. In those schools, no more than 8 percent of students are ready for college.

The CTU has advocated against closing any of those nearly-empty, failing schools. Lightfoot should demand the opposite. Those schools should be closed and their resources redirected to more viable schools.

The statistic that best sums up Chicago Public Schools’ crisis is its credit rating. Moody’s rates CPS five notches into junk, worse than even the city of Detroit. The City of Chicago is rated junk, too. It’s the only major city in the country besides Detroit to be rated junk. 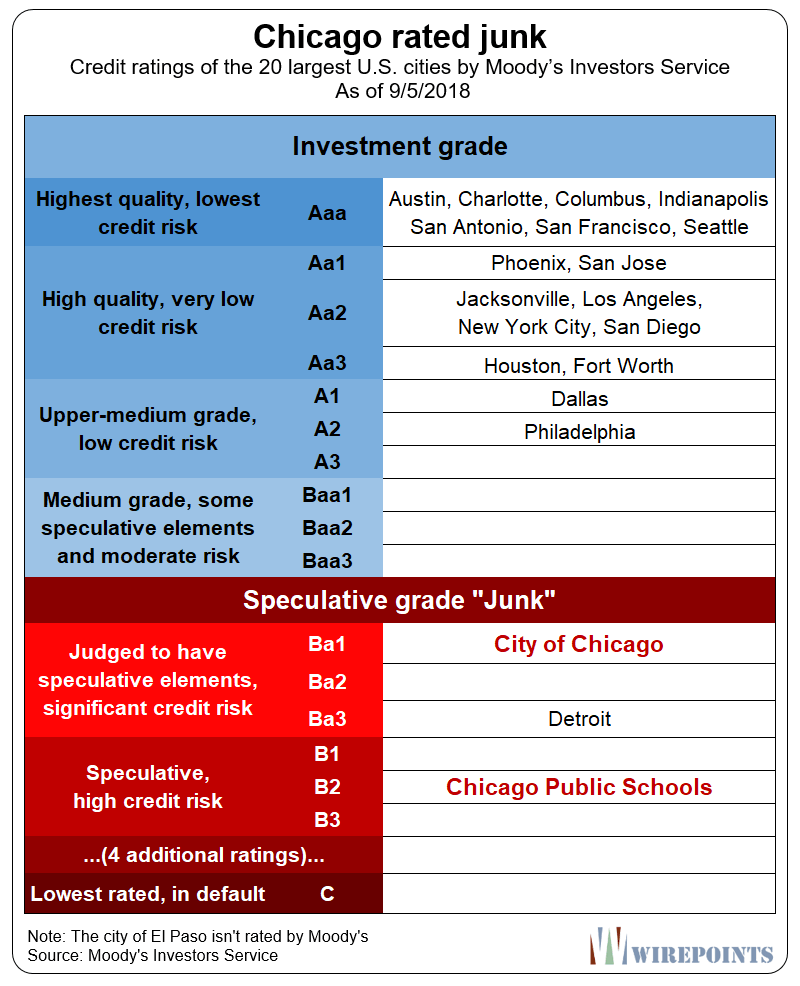 There are high costs associated with a junk rating. It’s far more expensive for the city and the district to borrow money. But the real costs come when lenders finally stop lending.

For the sake of city residents, students, pensioners and the district, the CTU needs to accept dramatic reforms to how it does the job of educating. Lightfoot needs to drive that point home during negotiations. The facts are on her side.

Lightfoot’s agenda is all about making changes to take care of the little guy. She can’t afford to let the CTU throw her off track.

Read more about CPS and the City of Chicago’s fiscal situations:

Whatever Lightfoot ‘knows’, or thinks she knows, is as irrelevant and useless as teats on a boar hog. The almighty CTU will frog march her out back to their dimly-lit smoke-filled alley and roll her like a Black Brunswick Bowling Ball, just as they already did to Rahm.

Who owns the public schools? by Ned Vare/ August 6,2007 gives an interesting take on public education. In it he states that public education only prepares kids for low level jobs/and or the military. Public schools are run like private corporations without any public scrutiny yet are required to fund them by local taxpayers and the state No Questions Asked! In Illinois the minimum per pupil expenditure is approx $6,400 which some downstate and rural school districts only have to work with yet kids are still getting the basic education. Why is there not a Maximum? The sky’s the limit… Read more »

The plan to roll out Universal Preschool (UPK) for all in CPS will result in how many more union teachers and what hiked costs?

CTU/IFT are one third of the unholy trinity of thieves that have plagued Illinois for decades alongside AFSCME and SEIU. CTU is the worst of the three because they hide behind children and hold parents hostage to their strategically timed strikes. I know many CTU members and their entitled arrogance is shocking: “We OWN Chicago!!!” Let’s hope that Ms Lightfoot lets Chicago parents know all summer long to plan for a six month or longer CTU strike so that they can enroll their kids in private schools or plan for childcare long after Labor Day. CTU must be broken and… Read more »