Kudos to Rahm Emanuel for broaching the subject of a constitutional amendment for pensions and for using cost-of-living adjustments as an example of why the amendment is so necessary. His recent speech on fixing Chicago pensions was a disappointment on many levels, but at least he’s sparked a discussion that lawmakers have largely avoided till now.

The possibility of an amendment in Illinois has experienced a revival of sorts since Arizona recently amended its constitution for a second time.  Already, the Chicago Tribune, Crain’s and Mayoral candidate Bill Daley have supported an amendment in some form. And COLAs are finally being recognized as a key driver of Illinois’ pension crisis.

However, it would be a mistake – as some may be tempted to do – to think that an Illinois fix is as simple as COLA reforms via a narrow, Arizona-style constitutional amendment. Instead, Illinois needs an amendment that’s as broad as possible if it hopes to fix the pension crises playing out all over the state.

Its a particular problem for Rahm Emanuel, as Chicagoans are the most swamped of all. Each city household is on the hook for $140,000 in overlapping state and local retirement debts. 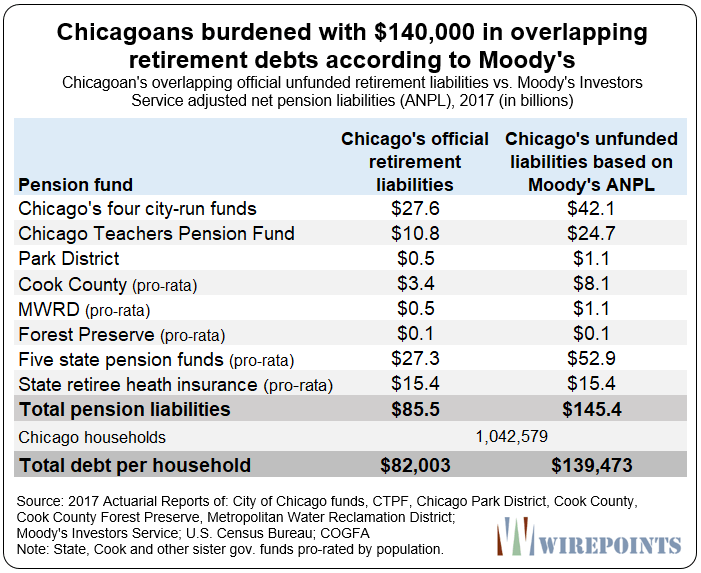 Arizona matters because its pension protection clause is similar to Illinois’. That state has successfully passed two amendments to its constitution in recent years, first in 2016 for police and fire workers and again, in 2018, for correctional workers and lawmakers.

Both amendments came after the unions agreed to reforms at the negotiating table. The reforms changed the COLA formula from maximum 4-percent COLA increases to one based on inflation, with a maximum of 2 percent. The reform also introduced defined contribution plans for new workers.

Arizona didn’t actually repeal its pension protection language with either amendment. Instead, it narrowly amended the pension clause each time, carving out exceptions for each reform bill.

The problem with Arizona’s approach for Illinois is that it’s piecemeal. Illinois is in too deep a crisis to go through that process for every reform it needs.

That would allow lawmakers to craft specific reforms at each level of government, from munis to Chicago to the state, without having to amend the constitution every time. Pensioners might still challenge reforms under federal law based on the contract clause in the United States Constitution, but Wirepoints’ view is that they’d ultimately fail.

Emanuel justified his support for a constitutional amendment by criticizing the expensive cost-of-living benefits many Chicago municipal retirees receive. Those workers get guaranteed, compounded 3-percent COLAs each year, one of the major drivers for unfunded liabilities for both Chicago and the state. Those increases have far exceeded inflation and were described by Emanuel as going against progressive values: “The fact is, a 3 percent compounded COLA in an era of very low inflation is not progressive and not sustainable.”

Consequently, much of the media has focused on reducing COLAs as the top-line reform goal.

That’s a problem, because Illinois needs as much flexibility as possible when coming up with solutions. Different pension plans have different problems, so various reform ideas – from decreased COLAs, to higher retirement ages, to increased employee contributions, to new defined contribution plans for current workers –  need to be considered. Think how different Harvey’s fiscal problems are from Chicago’s or the state’s.

Not to mention that voters will more likely support a constitutional amendment with comprehensive changes when those changes are part of the discussion from the beginning.

Emanuel’s push for an amendment matters because there’s little chance Illinois or Chicago can escape collapse without reducing their massive pension debts. A constitutional amendment is the path to getting those reductions done in an orderly way.

But for things to work, Illinois needs its amendment to be broad and its reforms to be comprehensive.

OK, lets say for the sake of argument that an amendment repealing the pension protection clause gets 60% in both the Illinois House and Senate, and 60% of voters voting on the amendment, and 50% of all voters voting in that election. Any pension cuts that follow will likely be challenged in state courts first. I would think that there is a general contracts clause in the Illinois Constitution besides the pension protection clause, and if memory serves me correctly the Illinois Supreme Court, in its unanimous 2015 ruling overturning a past attempt to cut pensions, mentioned that it would… Read more »

January 24, 2021
Board members of Township District 113, made up of two high schools serving more than 3,500 students, have shown no signs of wanting to open up even as nearby districts increasingly add in-person learning options. Not surprisingly, that has many parents in the north shore suburbs of Deerfield and Highland Park more than frustrated.
View Comments (2) | Add Comment