COGFA says that the state’s pension debt rose by more than $4 billion despite strong stock markets, a booming national economy and billions more in taxpayer contributions. 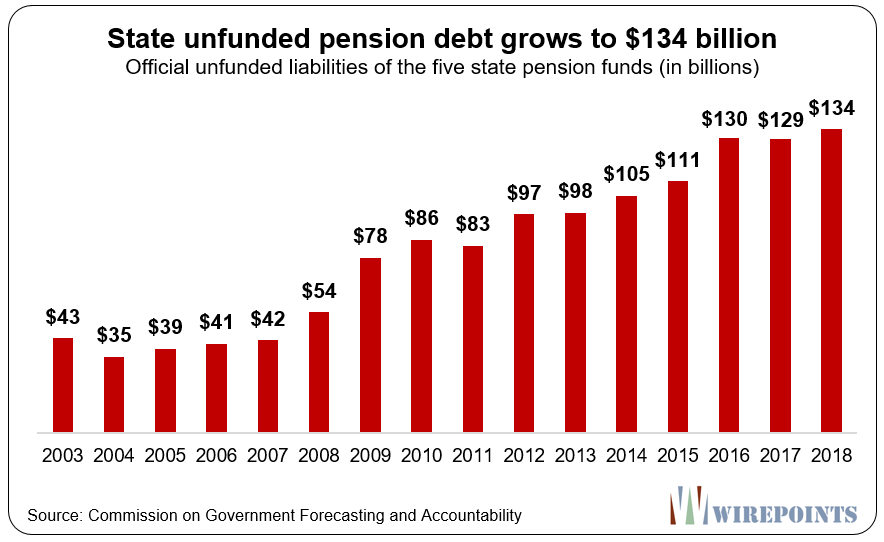 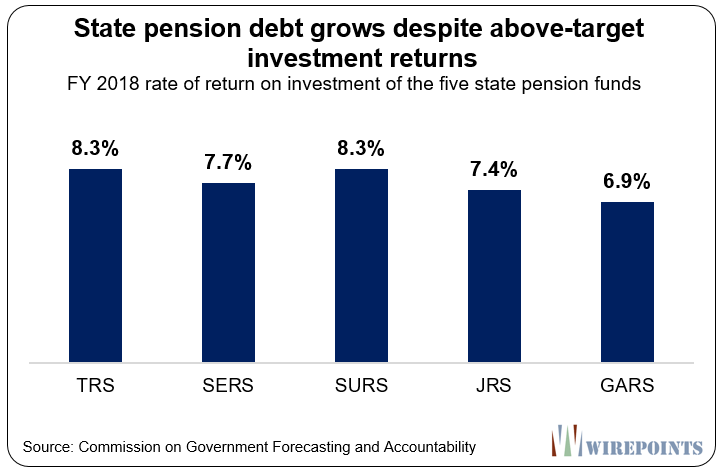 Illinoisans contributed $8 billion dollars to the pension funds in 2018, $6 billion more than what they contributed in 2008.

It just shows how unmanageable Illinois pensions have become. Billions in taxpayers contributions and above expected investment returns didn’t even make a dent in Illinois’ accumulated pension debt. In fact, the situation worsened for taxpayers and pensioners alike over the year. The pension hole is now larger by more than $4 billion.

Collectively, the five pension systems have just 40.2 percent of the funds they need today to be able to meet their obligations in the future, up slightly from 39.8 percent the year before. The university employee fund, SURS, is the best funded of the five pension funds, but its funded ratio fell by nearly 2 percentage points to 42.6 percent.

Most notable is the funding ratio for the state lawmaker pensions. It’s just 15.1 percent funded. Any way you measure it, it’s broke. Only a yearly bailout by taxpayers keeps that plan afloat. 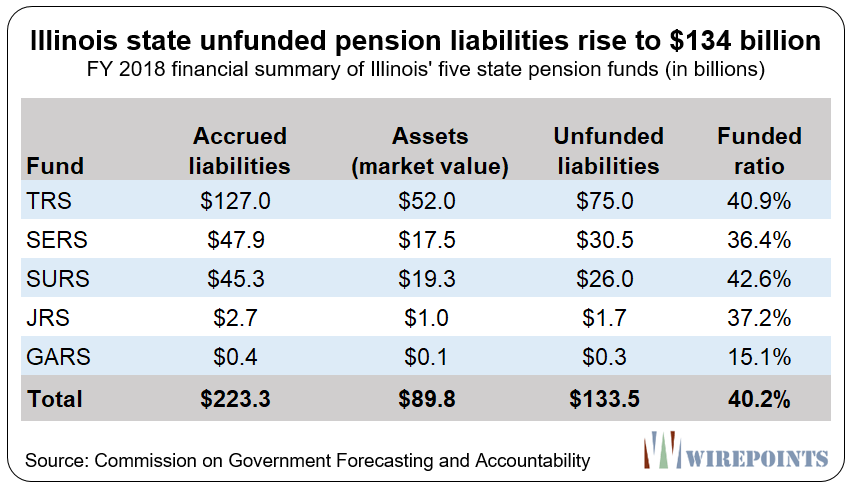 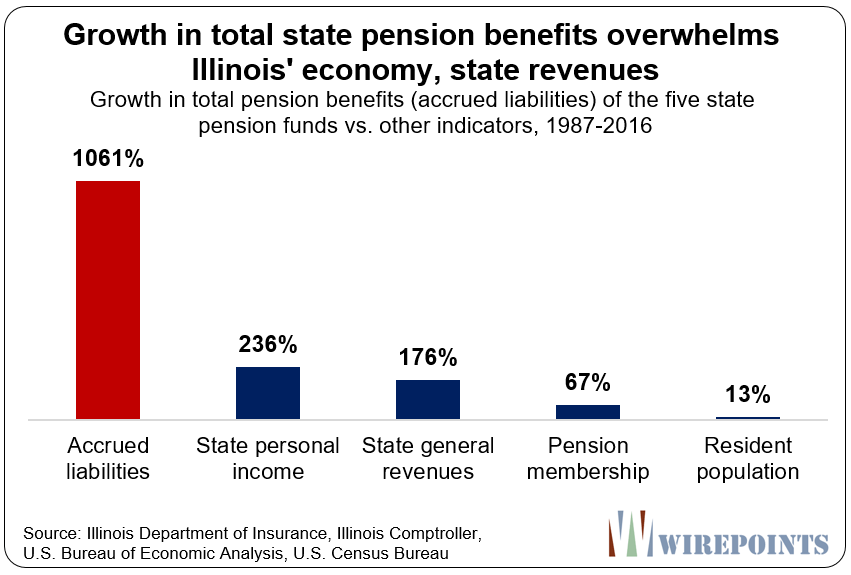 And when you compare accrued liability growth across states, Illinois is also an outlier. Wirepoints performed a 50-state analysis of pension promises and found Illinois had the 4th-fastest growing pension liabilities of all states between 2003 and 2016.

Stellar investment returns and growing taxpayer contributions aren’t enough to fix things so long as politicians refuse to do anything about the growth in pension benefits and the overwhelming pension debt burden.

Since the end of the Great Recession, the S&P 500 index has recovered and grown by 200 percent. 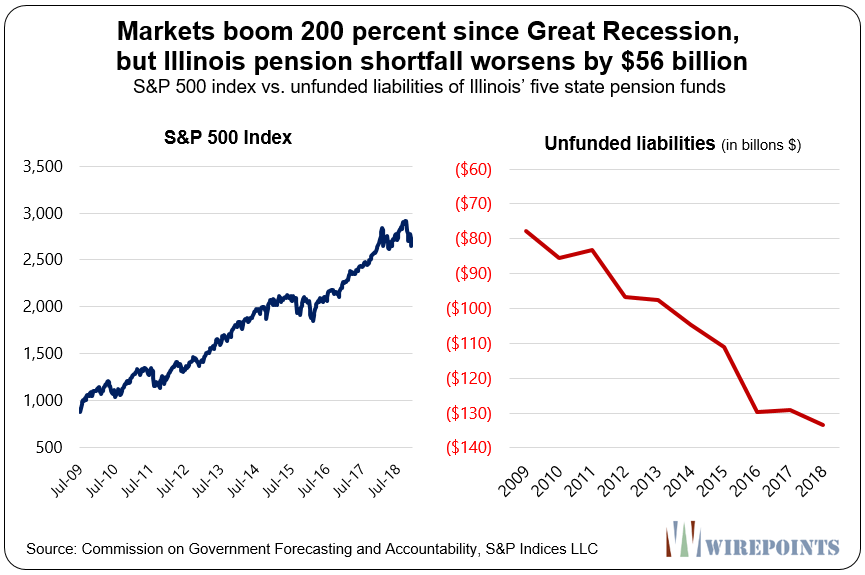 Some of the growth in debt was due to the pension funds changing their actuarial assumptions, including SURS dropping its assumed rate of return in 2018. Regardless, the systems’ overall downward trend is clear.

And the warning this trend provides is even more stark: if the state’s pension debts continue to worsen during a period of remarkable market returns, imagine how those funds will fare when the next recession inevitably hits.

What’s important to note is that the reported $133.5 billion in debt is the rosy scenario for Illinois.

When more realistic rates are used – those that can be guaranteed – the shortfall increases to more than $250 billion for the five state funds. That’s what Moody’s calculates is the true shortfall for Illinois.

Add to that all pension shortfalls in municipalities, plus the state’s $73 billion in unfunded health care obligations, and the burden on taxpayers becomes unbearable.

If Illinois properly paid its debt according to actuarial standards, 50 percent of the state’s budget would be consumed by retirement debts alone. Illinois is the outlier when it comes to that statistic and it’s one of the key reasons why the state is just one notch away from a junk rating.

Illinois’ multi-layered pension crises, including those in Chicago and throughout Illinois, will only be resolved when the state amends its constitution and significantly reduces its unfunded obligations at all levels of government.

Until then, the crises will only get worse.

Its too late to fix this. Math has taken over. In 12 -18 months we will be in a recession and the system will collapse. Rahm knew this. Rauner knew this. Thats why they didn’t run or “sort of” ran.

Five years from now Illinois will be 8 neighborhoods in Chicago, 5 suburbs on the North Shore and a sad collection of deserted towns and soybean fields.

And those numbers don’t include other post employment benefits like healthcare, which I understand are on a “pay as you go” basis. The Illinois pension debacle has steadily been on the radar ever since the kick-the-can-down-road 1994 Edgar ramp “reform.” The 2008 fiscal meltdown resulting from federal authorities apparently allowing bad home loans to flood the market for some temporary stimulus has added insult to injury. The only good thing to come out all this is that Illinois’ profligacy is now on the national radar, although I doubt that will make one bit of difference to the pirates running Illinois.… Read more »

Right. OPEB officially adds another $74 billion. That will be the subject of our monthly Crain’s article coming up. And use realistic assumptions like Moody’s and the pension hole doubles. The rest of your comments are dead on.

If you meddle with the constitution there will be complete and utter chaos. This state is doomed.

It comes down to this, Illinois public employees (especially teachers) make too much money. Illinois’s economy will never generate enough money to pay those ridiculous pensions, and deliver state services at the same time.

4
world with end
Reply to  Mr_Common_Sense

… and the imbalance of the ridiculously high teacher salaries compared to the private-sector worker working a 12-month job only continues to get worse because, with contractual raises and step increases, teachers’ salary progression is greater than that of the typical private-sector worker. Therefore, the problem is more than high pensions and free health care. In many cases, you now have some grammar school teachers making as much as some middle managers and senior-level, hard-core professionals in the private sector.

Time will tell … but perhaps the large salaries will turn out to have been a risk premium to compensate them for the fact that their employers and their pension systems are insolvent. Luckily, they will still have 20 good years of working life (55-75 years) to use their renowned superior skills in the private sector job market.

As a taxpayer I do not recall that when politicians decided not to fund or deferred pension payments that I John Q. Taxpayer were not obligated to pay my share thru property and other taxes. My taxes were and are going up year after year. So after my check cleared did the money appropriated to pensions get “Diverted” to higher salaries or political pet projects? Most likely it did. Why is it then mine and other taxpayers responsibility to keep funding the mismanagement of pensioners money? Were the unions and pensioners ever holding politicians accountable? I check my IRA and… Read more »

Freddy, you have the proper understanding of how things have worked. John and I made this case before joining Wirepoints using CPS as the example. Sharing it here. You are spot on. https://files.illinoispolicy.org/wp-content/uploads/2015/09/CPS_Exec_Summary.pdf

Sorry, that was the summary version of the report. Here is the longer one: https://files.illinoispolicy.org/wp-content/uploads/2015/09/CPS_Paper-1.pdf My favorite quote from it was: The funds directed away from pensions ended up being spent, most notably, on compensation. According to the Chicago Tribune: “Diana Ferguson, the school district’s chief financial officer at the time, defended the pension holidays, saying the money saved by not paying into the pensions still went to teachers through salary increases and other benefits. ‘It’s not as if we are keeping the money from them.’” From 1998 to 2012, the district consistently handed out average annual pay increases of… Read more »

But even if they did the Edgar ramp payment the state pension funds would have lost $3.5b.

No, they didn’t pay the arc. Can’t get specific because the damn pensions haven’t posted their actuarial reports yet. What bull****.

Pension assumptions are easily adjusted to reduce the ARC. Three ways to do this would be extend the amortization period, increase the expected rate of return or by using dated mortality assumptions.

This “one step above junk” phrase that gets thrown around is a joke. Of course as bad as things get the rating agencies and bond market in collusion with the pols will always keep it one step above junk. That’s where they want it, high yields, the institurional investors are still in and the taxpayers are screwed over each year. Sure it belongs at junk. But that is what all these people fear most. And Moody’s will ensure it never goes to junk as it should. Moody’s is as corrupt as any party here, they artificially move the goalpost every… Read more »

Watch the full movie “Fall of the Roman Empire” (1964) on you-tube before it is removed. As Will Durant woefully narrates–it took Rome 300 years to fall and was an accumulation of many events. I heard that one of those events was Rome not being able to pay the pensions it promised to all those soldiers.

The old adage: “If you find yourself in a hole, stop digging” is true. Ergo,Step one: Move all new employees to a defined contribution plan.

Step two: Move to a contract model for most most services (IT, Secretary of State (driver’s license) etc). That will break the current employment contracts and stop the accrual of benefits for a great number of now public sector employees.

Just this would be a major accomplishment.

Oh boy can’t wait for the report on this year.
Meanwhile the Dow has dropped 4% this week

Exactly. If they budget for 7% returns and instead get negative 7%, that’s disaster. If the current correction gets much worse, that could be the trigger for change (or collapse).