Village of Kenilworth trustees want to use a complex financial scheme, known as a TIF, to redevelop the village’s 0.6 mile-long business strip. Originally meant for blighted areas that have no access to investment dollars, TIFs give city officials oversized control over tax dollars spent on property development. Unsurprisingly, that’s led to the abuse of TIFs in Illinois. 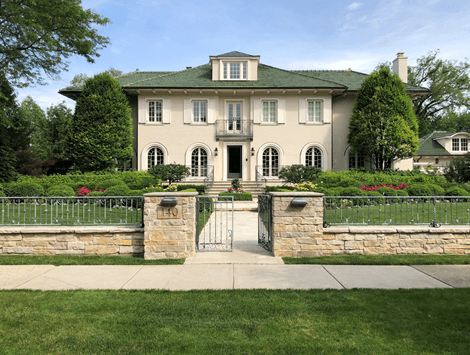 Kenilworth officials are looking for that kind of control over their proposed TIF district, a 15-acre area along Green Bay Road. A TIF will allow them to divert property tax dollars away from the Sears and New Trier High School districts and other local governments, and toward subsidies for property developers, for a period of up to 23 years. That’s a big reason why both school districts have come out against the TIF proposal.

To get the TIF designation, Kenilworth officials need to prove that the village’s business district is at risk of “blight” and that investment won’t come “but for” the existence of a TIF. They’ve already hired a consultant to prove that for them.

The consultant’s claims don’t hold water. The business district – located in a 2,500-resident community with a median household income of $204,000 – is far from suffering any blight. And private investments in the business district are still happening all the time.

In no sane world does AAA-rated Kenilworth need a TIF to redevelop its business area.

But if Kenilworth can get away with creating a TIF anyway, then every community in the New Trier area can justify having one, too. That would have serious fiscal consequences for the funding of school districts and other governments down the line.

What TIFs are actually meant for

TIF districts are meant to help develop property in truly blighted areas by acting as a tool of last resort. The argument, it goes, is that new development won’t happen in the blighted area “but for” the presence of a TIF. In other words, there’s little hope of investment coming to an area without the TIF district spending money on improvements and developer subsidies.

The Kenilworth business district is clearly not the place TIFs were designed for. The area isn’t in danger of becoming “blighted” by any stretch of the imagination. Wirepoints recently drove through Kenilworth’s business area and saw the following:

Contrast that with the images from a visit last year to the City of Harvey. The video below was taken just across from Harvey’s Metra stop and city hall. Harvey’s decline has been so deep that there’s little chance it can attract development, even with subsidies.

Businesses have fled, the city has no borrowing capacity, it has virtually no assets left, and home values have collapsed to almost nothing. In Harvey, the “but for” TIF argument is at least understandable.

Kenilworth officials’ claim of potential blight is trivial when compared to the real suffering in a place like Harvey.

Kenilworth trustees are attempting to declare the city’s business district a “conservation area” – defined as an area at risk of becoming blighted. That would give village officials the justification to create a TIF district and spend a total of $23.7 million in property tax dollars, including up to $10 million on land and property acquisition.

The TIF law defines a “conservation area” as: “…An area which 50% or more of the structures in the area have an age of 35 years or more. Such an area is not yet a blighted area, but…is detrimental to the public safety, health, morals, or welfare.”

The law also says that an area needs to have a combination of three or more of the following factors to be considered a conservation area:

According to the city’s hired TIF consultants, Kenilworth’s business district has buildings that are more than 35 years old, but aren’t dilapidated, obsolete, below code, overcrowded or in need of remediation, etc.

Instead, the consultant found the business area qualified for four of the needed factors: a decline in property values in three of the past five years, deterioration, inadequate utilities, and lack of community planning. 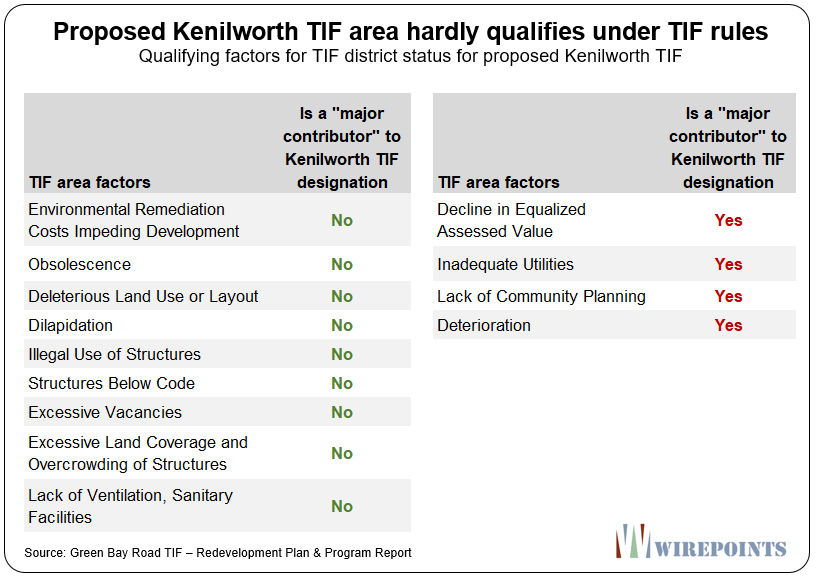 Let’s look at those four factors.

First of all, the argument that the business strip should qualify for a TIF because of a drop in property values is flawed when you look at the community as a whole.

Yes, the proposed TIF area lost property value in three of the past five years, as highlighted by the village’s TIF consultant. But so, too, did the entire city of Kenilworth. The changes in property values in the potential TIF largely mirrored what happened in Kenilworth overall. That invalidates the consultant’s argument. 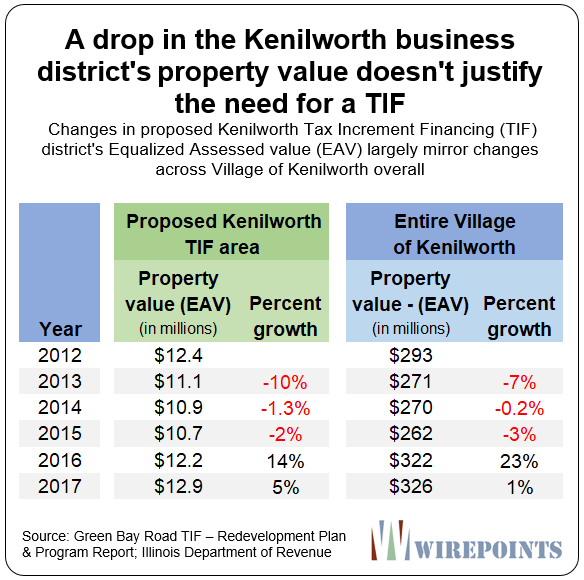 The other factors cited by the TIF consultants – a “lack of community planning,” deterioration, and inadequate utilities – don’t require the creation of special, long-term development tool like a TIF to fix. All of them can be handled by the city’s current budgetary tools, or are already being handled by private development.

Deterioration, for example – including water damage, deteriorating employee parking areas and damaged fencing – is constantly being corrected by businesses themselves. Plenty of businesses have fixed those issues by investing in upgrades, remodeling, or rebuilding structures altogether. Take the Fenner building, where investors took an unattractive structure and spent millions to upgrade and repurpose it. Medical businesses are thriving there. Or take the run-down body shop taken over by The Last Detail. It’s now a collector car showroom.

Wirepoints can’t assess the need for utility upgrades, but the $8 million the city wants for that purpose can be accessed through the city’s usual financing tools. A TIF isn’t necessary.

And it’s ironic that a “lack of community planning” is a justification for the TIF, considering the village has “no specific plans in mind,” for what to do with the TIF money, a fact Kenilworth village manager Patrick Brennan recently admitted in a Crain’s interview.

New Trier residents should call out Kenilworth trustees’ push for a TIF district for what it is: a power grab over property taxes and an unnecessary foray into the realm of property development. That’s especially true given that city officials want the money but have no actual plan on how to spend it.

TIFs are a debatable tool even in the most blighted of areas of Illinois because they siphon money away from school districts and other local governments. They are entirely unnecessary in wealthier areas of the state.

Kenilworth, and New Trier as a whole, will be much better off without them.

Learn more of the details about Kenilworth’s proposed TIF:

2 errors: 1. Please stop stating that TIF lasts “up to 23 years”. TIF legal lifetime is 35 years by statute. There is little if anything taxpayers can do to stop the rubberstamp 12 year extension granted in Springfield by politicians to politicians for benefit of politicians: at taxpayers expense. 2.you must clarify the circuitous nature by which TIFs “take money from schools “. TIFs which create new residential properties increase school enrollment. Yet the main source of school funding is property taxes and TIF properties pay zero or a tiny statutorily limited(to protect tif bondholders) amount. Therefore, for 35… Read more »

The original TIF district granted is for 23 years. Then an additional 12 years can be added only by an act of the state legislature. Only a few TIFS out of more than 20 here in Rockford have made some money because for decades our property values have depreciated or were stagnant because of high property tax’s and just up a few % last year. If I am not mistaken Chicago’s Willis Tower is in a TIF and was valued at around $400M then sold for over $1 billion with most of the difference in value’s property tax’s going to… Read more »

Illinois spends 30 to 50 percent more than its neighbors on education, but its students do worse

January 22, 2020
In a nutshell: Illinois spends far more than its neighbors on education and its politicians are committed to spending hundreds of millions of dollars more every year. All to achieve student outcomes that haven’t improved in a decade and are, in most cases, worse than in neighboring states.
View Comments (9) | Add Comment