The Chicago Tribune reports Mayor Lori Lightfoot is considering a slew of one-off actions to help close what city officials claim will be a $1.2 billion shortfall in next year’s budget. Her ideas include a $94 million property tax hike, a cloud tax, $13 million in layoffs and some shifts in costs to the city school district.

Absent in the list of savings is anything that can be considered a structural reform. Chicago’s finances are among the nation’s worst, yet Lightfoot still refuses to even consider real changes to how the city operates.

A majority of the savings, reportedly about $300 million, come from “improved fiscal management,” a line item that was used to close gaps in the 2020 budget. Use of TIF surpluses is expected to provide the bulk of the cash needed to close any remaining budget gap.

The Tribune article neatly sums up the difficulty Lightfoot has in crafting a budget this year:

“The mayor has been considering up to $200 million in cuts to Chicago’s roughly 32,000-person city government workforce, though layoffs and furloughs will draw criticism from labor unions and damage a segment of Chicago’s middle class.

If the mayor borrows to plug the shortfall, she likely will be criticized for putting the current financial burden on future generations. If the city refinances its debts then uses the money to shore up finances in the short term, she’ll likely be criticized for relying on one-time fixes.

If the mayor raises property taxes, she could face backlash from residents whose finances already have been walloped by the pandemic-fueled economic downturn.

If Lightfoot raises fines or fees, she could be criticized for walking back on her promises to end what she has called the city’s “addiction” to fines and fees.

Entirely missing from that analysis? Any mention of needed pension reforms. That’s particularly troublesome since pension contributions by the city will continue to go up by some $700 million by 2023.

Chicago’s pensions are the worst funded in the nation. Several of them, including the police, fire and municipal funds, are in danger of running out of assets entirely. Their ratio of assets to yearly payouts have collapsed considerably since 2001, making them some of the most likely become pay-go. Wirepoints wrote about that in: COVID-19 pushes nation’s weakest public pension plans closer to the brink: A 50-state survey 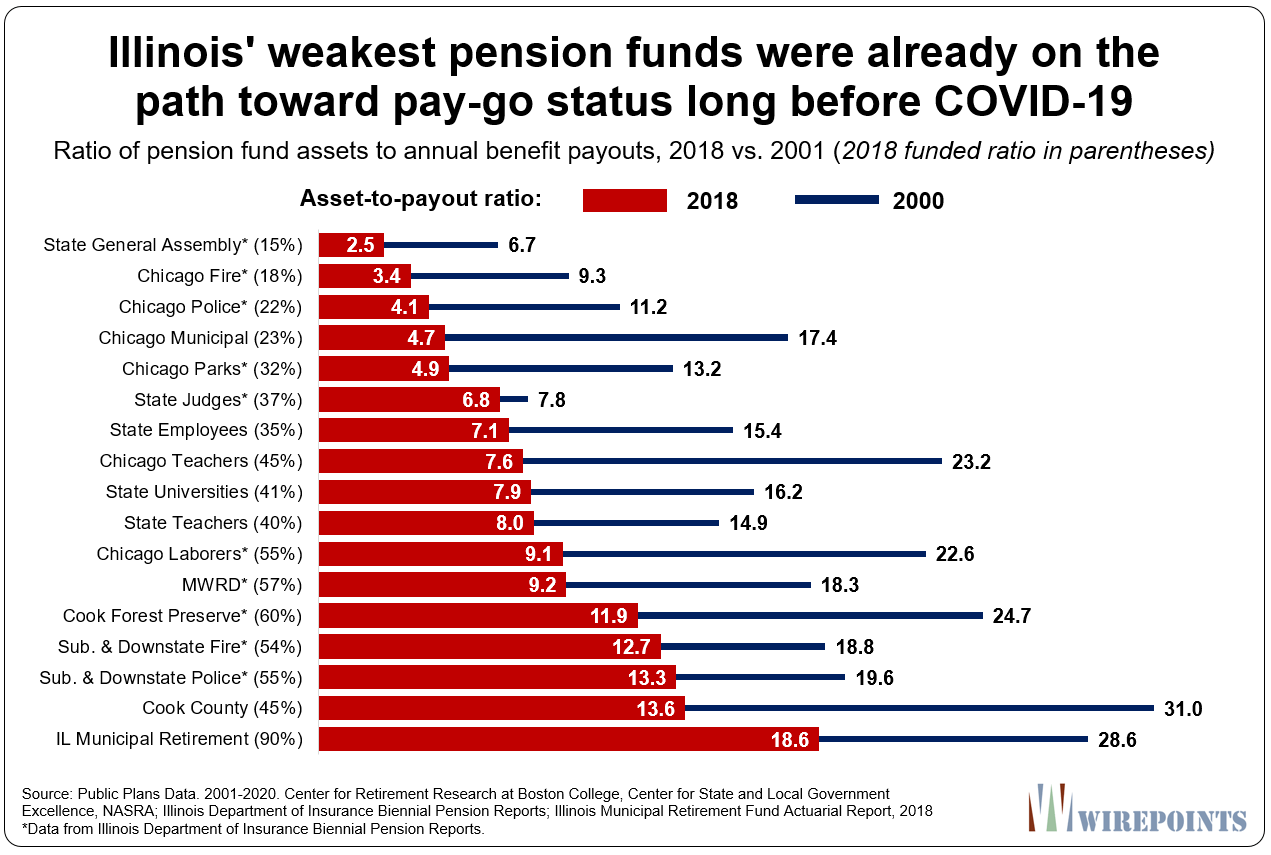 Lightfoot says her full plan won’t be known until she unveils it – saying “all options are on the table.” Except for the biggest one, for course.

It is so sad it is almost Funny.

Maybe Lori can issue traffic camera tickets that fine drivers for going 6mph over the speed limit. I’m sure that will help with the budget. Maybe some jaywalking fines as well.

If fair tax passes, sure chicago pushing for progressive city income tax will be almost instantaneous…as well as every other bankrupt city in ill. Because that’s the pandoras box that will be constitutionaly open

The state collective bargaining laws need to be reformed so government management can balance the needs of government employees and taxpayers.

No salary hikes during a pandemic should be a no brainer.

Now, with the projected budget deficits of the City, the Rahm Emanuel’s attempt to build the OPC, I believe, has lost it’s appeal and subsequently the support of the community. The community needs to know how they are being duped to the tune of ever growing $250 million more dollars on the taxpayers’ back.

The fun has just begun. More taxes, less services.
Everyone in the private sector is getting a pay cut or loosing their jobs.
Cops, teachers and firemen all got nice raises.
All pensions went up 3% annually.
Hurrah for tax increases, they are NEVER GOING TO STOP.
Glen and Ted can try to slow it up, but it is like pushing a wet noodle.

Cops got nothing. They’ve been working without a contract for years. Don’t make stupid statements.

1
DixonSyder
Reply to  The True believer

Poor Taxpayer only makes stupid statements. Lots of them. Ignoramus constantly posting drivel without one ounce of information other than his angry opinion.

0
Mike
Reply to  The True believer

Lori is just playing a bigger version of the old shell game. She keeps moving things around without really doing anything. She is really just a nasty little person and will be found out to be the incompetent wannabe she truly is in the near future. And this is the so called face of the city? Yikes!

The WirePoints chart shows that by 2025, there will be some major fund insolvency. It’s happening – BK.

I repeat my comment from earlier—Meanwhile, this report from inspector Ferguson in st from 4 days ago states nearly 1/2 of city workers have had ZERO performance review—i.e. the city has no idea of what all those $six-figure$ city workers are doing ASTOUNDING!!!!
https://chicago.suntimes.com/city-hall/2020/10/14/21516460/chicago-city-employees-performance-evaluations-inspector-general-report-joe-ferguson

4
Governor of Alderaan
Reply to  NB-Chicago

Bye Bye Chicago and anyone who ever wanted to live there or work there.

Will someone please explain to me how eliminating an un-filled job saves a single dollar? If no one is getting paid and the city is not putting the salary for those non-existent persons into a cookie jar, where is the savings? It looks to me like yet another bean counter gimmick.

in political budgeting, it was present in prior budgets. Since they are “cutting” it, they are “saving”. It’s accounting hocus pocus but not economically meaningful.

3
Governor of Alderaan
Reply to  Benicia

All sorts of gimmicks are possible with government budgets (forecast).

Truth in Accounting doesn’t even bother looking at budgets.

They just look at the financial statements (results).

Nothing aggravated me more when Obama and Co. would spout that crap constantly

But there will be plenty of free money for safe passage, violence interrupters, and other members of the permanent victim class to buy votes for the democrat losers.

What is a cloud tax? Taxing netflix streaming? Why? She already doubled the going rate for Uber and Lyft. Literally doubled with all the fees and taxes levied. Then there was the plastic bag tax of 7 cents. What is next? What ever happened to this casino that was going to solve all of the citys problems?

That’s why Groot will be the PR face of the city. Her genuine BLM and ANTIFA authenticity will draw in businesses like flies to honey. Yessiree.

They won’t solve the pension issue until there is literally zero dollars in the bank account. These politicians are akin to the person who won’t face the truth and get a plan together to solve their financial hardship. They’ll just keep bouncing checks and buying the things they want with the latest week’s paycheck.

When the bond market stops lending, the City will start having to make some real choices. Until then, we will be burdened with this piecemeal “everything is on the table” (but ultimately not everything) ridiculousness.

Good one! Thumbs up!

Spot on. They wont stop spending until they run out of other people’s money and their bond market credit cards are cut up.

But, hey, I closed everything down the Sunday after all of the St. Paddy’s Day parties, I closed the lake front, and I virtue signal like the best of them… And, I kept the rioting and looting to a reasonable (there is no such thing as acceptable rioting) level.

And, I banned sugary and non-sugary drinks… Job DONE.

(Oh, wait, that was my opponent who had it out for flavored beverages.

November 24, 2020
The strategy of shutting much of the state down – from lockdowns to school closings – has done far more harm than good, in part because it’s taken health officials’ eyes off of the elderly and the infirm.
View Comments (10) | Add Comment