The most recent Case-Shiller Index of home prices shows Chicago’s metro area continued its pre-pandemic struggle to show real growth. Chicago home value growth for April 2020, year-over-year, was just 1.4 percent, the lowest of the metropolitan areas included in the Case-Shiller 20-city index. The Case-Shiller index measures the change in value of single-family homes and is calculated and kept monthly by S&P.

Phoenix, Seattle and Minneapolis had the highest growth, with prices in Phoenix growing nearly 9 percent over the year. 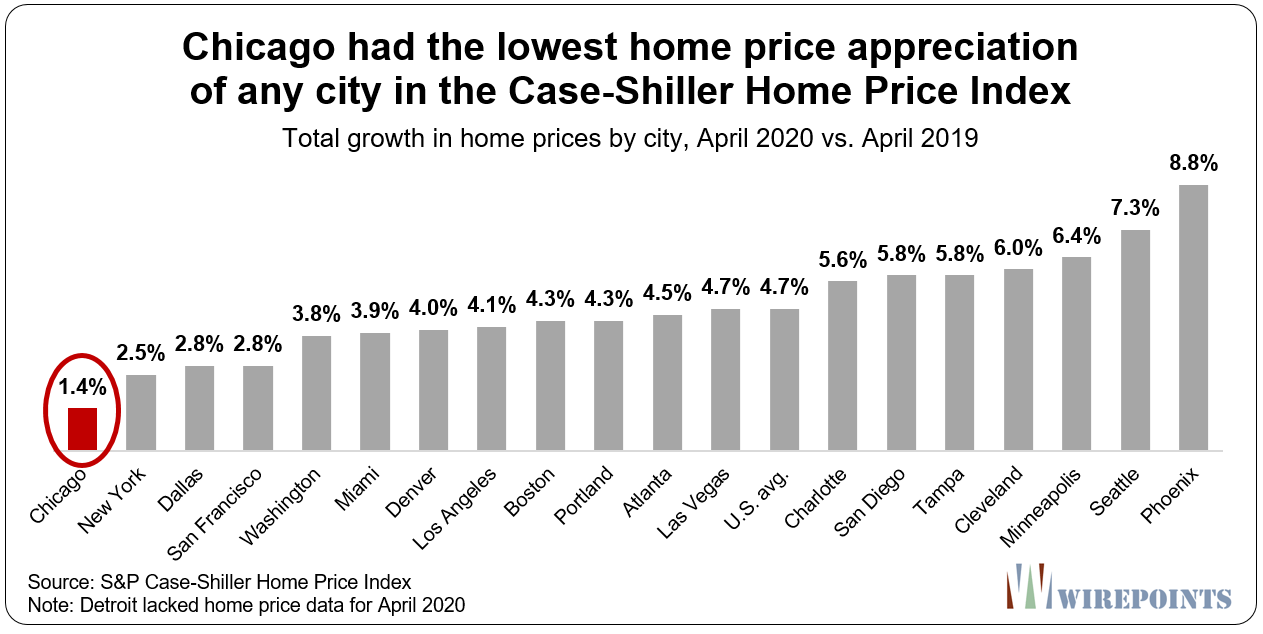 While the short-term data for Chicago is already bleak, the longer-term picture captures just how badly the Windy City area’s home market has done since the new Millennium. In all, Chicago prices are up just 46 percent since 2000, shy of the 51 percent inflation over the same period. Only Cleveland and Detroit have seen their homes appreciate more slowly than Chicago.

In contrast, cities like Miami, Seattle and San Diego have seen home prices grow more than 150 percent. Los Angeles homes have appreciated the most, growing by nearly 200 percent. 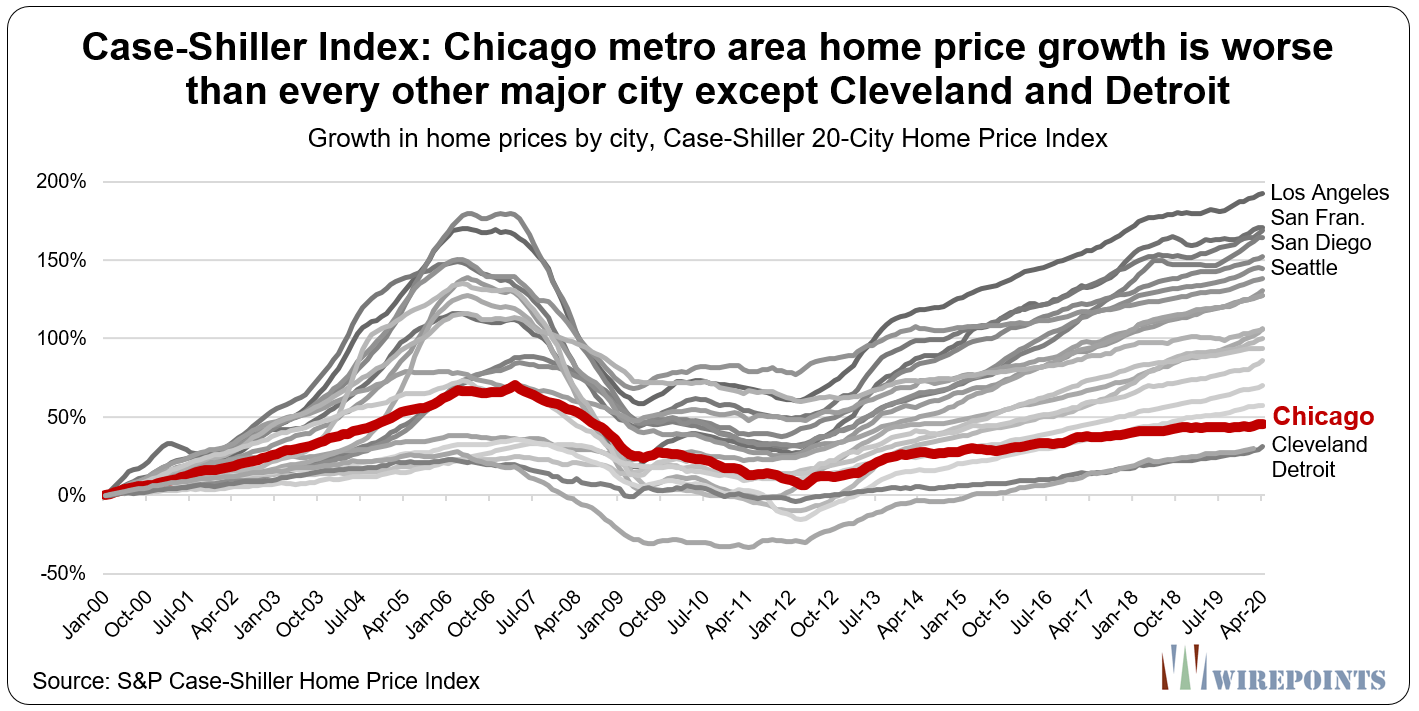 Chicago’s list of troubles continues to grow. There’s the violence, the debts, the collapsing finances. And then there’s the damage wrought by COVID-19 and the economic shutdown.

Stagnant and falling home values will only make things worse. 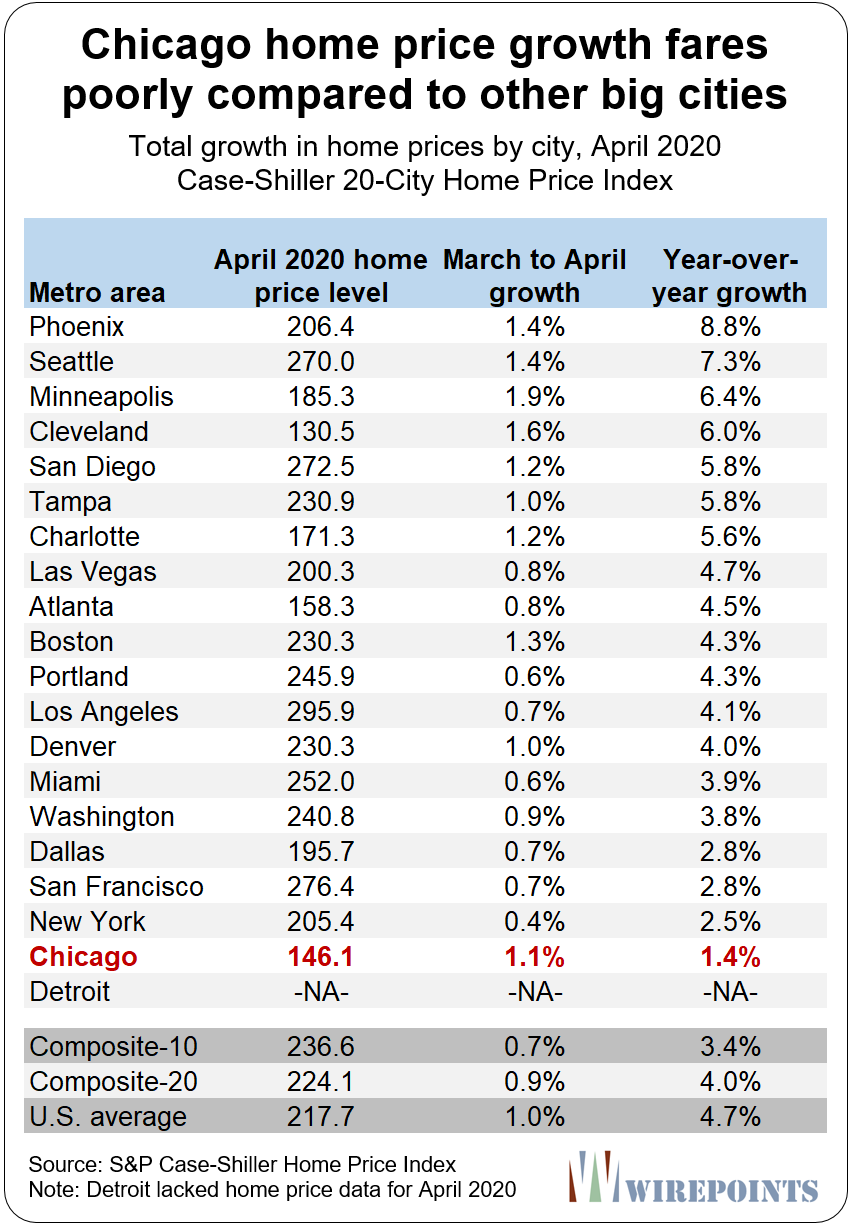 You have not seen anything yet.
You will have to pay people to take your house off your hands.
No one wants the hundreds of billions of pension debt, no one.
The only way to avoid it is get out of town.

79 shot, 15 fatally, over Fourth of July weekend in Chicago

Nobody wants a house in Chicago, given the crime, grime, governmental incompetence schools, decline of Northside business districts, etc. 😭💀

CHICAGO – Thirteen people have been killed and at least 54 others injured in shootings across Chicago so far over the Fourth of July weekend.

They have taxed away your equity.
Things are only going to get worse.
Getting rid of Herpes will be easier than selling a home in Illinois.
Illinois “Land of Slavery”

Tax rate capitalization theory aeems supported by Chicago and Illinois data. The theiry is that social service provision of standard quality or better is accomplished for costs which are reasonable given the means of the taxed community. That is expressed as property tax rates. (A wealthy suburb may tax much higher nominal amounts than another poorer neighborhood, but the two property tax rates may not deviate significantly because each taxes according to the means of its taxable community.) In America, a standard ptax rate sufficient to provide social services (schools, police, government, etc) is 1% of fair market home value.… Read more »

I dispute these figures for Chicago. I live in a upper middle class area in Chicago’s Far Western suburbs. I bought my house in 2001 and judging from similar houses that have recently sold nearby its more like it’s up only 125%-130%.

While I’d love to get a 146% return on my original investment, that would also mean I just broke even for inflation over the same period with no actual appreciation in real value.

Chicago’s price problems are compounded by the areas that were completely destroyed in the 2008 housing collapse and never really recovered, which includes much of the south suburbs and some exurbs. This combined with few new household formations (and lots of out-migration) is a recipe for disaster.

Sell the home if you can and become a renter till you can leave.
The best day of your life is the day you leave.
Anywhere is better than Illinois land of economic disaster.
The greed of cops, firemen and teachers have destroyed the quality of life for everyone.

As a long term investment, in general, real estate looses badly to the stock market. Real estate being a good investment is somewhat of a myth. It is highly dependent on on how well an area is governed. Chicago is poorly managed city that finds itself in a poorly managed state, hence a double whammy for homeowners.

You are correct for residential real estate. Commercial, no. Almost all commercial tenants directly pay for all costs related to the real estate, including taxes. It’s a big win for commercial landlords, the way the industry is structured. They’ve done a good job passing the risks and costs onto the working business that they lease to. To the point that the business is almost not profitable. Homes, on the other hand, require the same things — maintenance, taxes, time and management, but these are not passed along if you live there. They are absorbed. By the time you include inflation,… Read more »

Sandra, for anyone that has money beyond basic needs (including rent or mortgage), the best place to park that money is the stock market, not real estate. History and math support this claim.

And we all know what is sucking all the value out of homes.