Base revenues for the State of Illinois for April sank by 46% from compared to April of last year, a $2.7 billion drop. 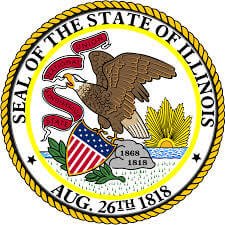 It was a “perfect storm” that conspired to cause the drop, according to the Commission on Government Forecasting and Accountability report – “a combination of COVID-19 impacts, delayed tax filing deadlines, and comparative drop-off due to 2019’s April Surprise.’”

After managing to avoid much of the virus’ effects on March revenues, as foreshadowed in last month’s briefing, the impact on April’s receipts was unavoidable. In addition, the “tax day” deadline change to July 15th delayed approximately $1.3 billion in final payments into next fiscal year. And finally, the one-time nature of 2019’s ‘April Surprise’ related to a surge in non-wage income taxes and federal sources, exacerbated this month’s comparative decline. 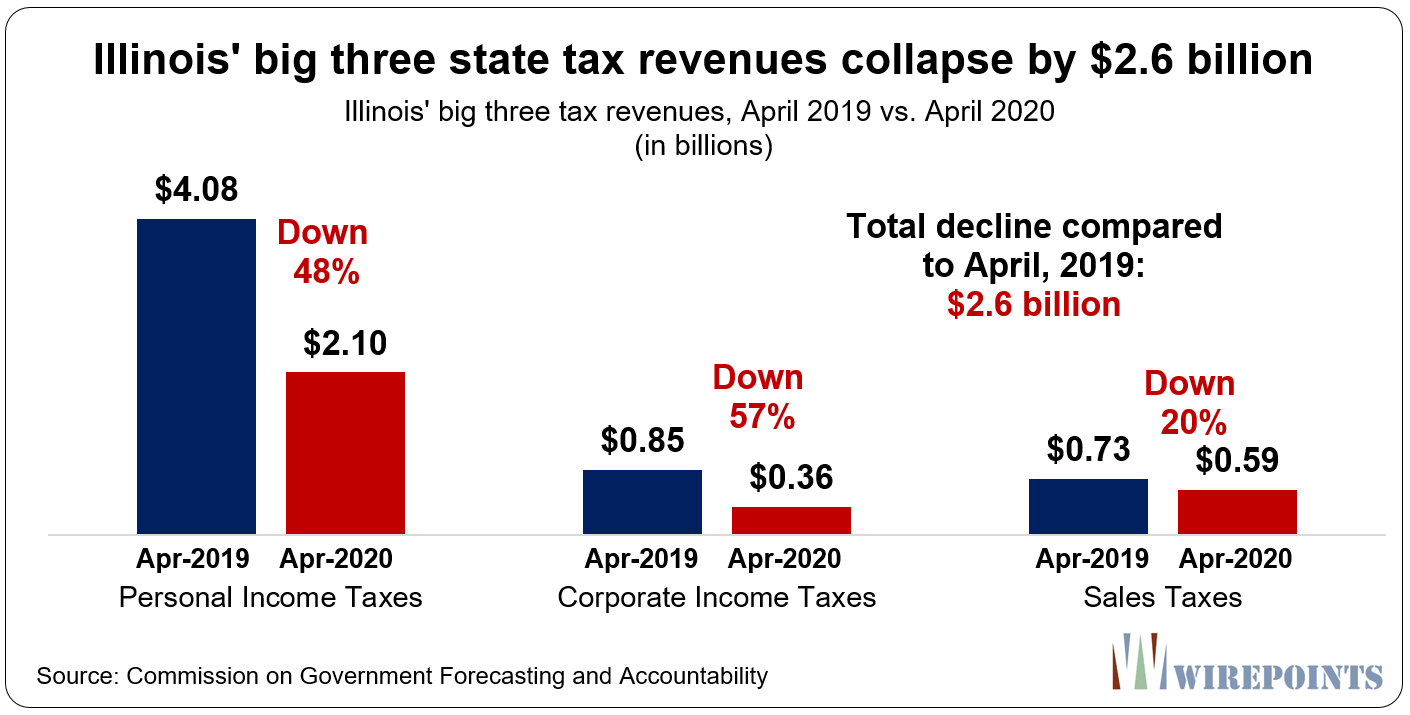 To offset some of that loss, the state’s general fund borrowed a total of $218 million from dozens of the segregated special funds held by the Illinois Treasurer. According to COGFA, those amounts “shall be repaid from general funds to the original funds with interest within 48 months of the dates borrowed (was originally 24 months).”

Going forward, “While a tremendous amount of uncertainty remains, with April now behind us, over the coming days the Commission will be recalibrating its revenue outlook for FY 2021 as well as updating its FY 2020 estimate.”

Illinois will have to raise the taxes up 20% or more to make up for all the money lost.
Good thing that retired government workers getting HUGE PENSIONS will not pay 1 red cent to State Income taxes. Only honest hard working taxpayers will bear the burden of heavy taxation.

Feel like you are being screwed?
It is because you are.

Can the state and municipalities not make any payments to pensions for 1 year to cover actual services? I would remit any employee withholding for pensions (and of course 401k), but the $ is needed elsewhere…

0
The Truth Hurts
Reply to  Mike in Madison

“but the $ is needed elsewhere” That thought process over the years is the primary driver of the state budget issues. The state doesn’t need to make pension contributions. Pensioners have only a right to their pension payment not a certain level of funding. The ratings agencies have warned of a potential downgrade if this is done but that was prior Covid-19. The Governor knows this. He will ask for a federal bailout. If they get it great. If not then they won’t make the pension fund contribution. He then gets to say pension payments would have been made if… Read more »

If Illinois and other government units stopped paying inflated salaries-see attached article from Forbes on Huge salaries and equally oversized pensions-it would add 14 Billion to the coffers. https://www.forbes.com/sites/adamandrzejewski/2020/04/27/why-illinois-is-in-trouble–109881-public-employees-with-100000-paychecks-cost-taxpayers-14b/ I especially like the $100,000 salary for a prison barber. I mean, you can’t make this stuff up! I have a quick solution to reducing the pensions-just stop paying them! I know, the politicians say we can’t because of contracts and the constitution and all that. But.apparently there is also a provision in some law that States can’t make promises that will prevent them from rendering basic services. Called Police law,… Read more »

Leave if you do not like it is what I was told by a teacher on a HUGE PENSION.
I did and it was the best day of my life. I have never looked back.

“I have never looked back.”

He’s providing a valuable public service, reminding us how fooked we are.

While I value some advice…and there is some hearty stuff floating about this site. A constant reminder does gets old. Hang around here long enough and you’ll learn just how ruined Illinois is.

1
Fur
Reply to  The Truth Hurts

Illinois is TOAST, a Goner, DOA.
The greedy cops, teachers and firemen are getting full pay and benefits. The pension keep coming and NOT 1 PENNY OF STATE INCOME TAXES BEING PAID ON THEM.
Leave while you can.
Selling a home in Illinois will be like trying to get rid of Herpes.

Aren’t these the same special funds that were swept a year or two ago with great fanfare by the treasurer from various investments into state of IL bonds because the “investment returns” on IL debt was so much more better?

The only thing middle class taxpayers in Illinois, who depend on private business, can do is diligently plan for an exit from the state. With the economic depression Pritzker has single-handily created, people will need to leave the state just to find work anyhow. Other states that have already reopened will feast on the state of Illinois, luring even more private business away from the morass called Illinois.

And still not one sentence about a furlough, pay reduction or layoff of a single state or municipal employee.
And even worse, the Gov wants to go ahead with pay raises and Lori won’t even consider furloughs. Illinoisans have just gone beyond the edge of stupidity by putting up with this fiscal suicide.

It is extremely difficult to not want to wag one’s finger at the LIBs who have driven us THELMA AND LOUISE right off of a cliff. When you vote for candidates who champion social issues with no understanding of basic math, basic finance, and basic economics, this is what you get… Are we not amused? And, Lightfoot, you understand your inability to stand up to JBee, the “B” stands for bobble-head, will impact the law abiding folks in the communities about which you care (as it is obvious she does not care about those who write the checks and fill… Read more »

There’s another option: Furlough employees but let them use unused sick days to receive full pay. While you don’t save money upfront on salaries, you save money in the long run by not having to pay out unused sick days at a later date. Seems like a small give from employees, given the circumstances.

The gov. of Ohio just announced big cuts, half of which is for education. The education advocates are going ape on twitter. That is so funny. Sorry people, when states get into trouble with their budgets, education gets cut first because it’s a big target and it’s one thing you can cut. You can’t cut pensions. You can’t print money, either. There are a lot of lawmakers working second jobs to pay of their student loans, but it’s their job to balance budgets.

At the same time people are going to need some massive tax cuts in income, property and sales tax relief to start the Illinois engine up again. A massive army of government workers does not generate capital or generate value or markets. Business does that, and both these numbers and government here is toxic to business which now needs more than ever to stand up again. Business will try to stand up again, but Madigan and Pritzker will be kicking them in the head, pulling down their ladder and generally being an annoying PIA to business. Government here will be… Read more »

Pritzker needlessly and illegally kept much of Illinois private business on lockdown, even though there was little of the virus around in most of the state. Pritzker is to blame for much of the decline. No Bailout!

These are “April” numbers, but for sales taxes, businesses were reporting March’s numbers. It lags one month. What I don’t know is if the state accounts for this on an accrual basis, meaning they go back and adjust March based on these numbers and reflect the change in April from estimates, or if they just count filings in April as just April revenues. Based on what I’ve heard in the past, they count April filings as for the April reporting period, even though the activity happened in March. The significance of that is that the worst has not hit yet.… Read more »

Personal income tax payments down 48%? Well, I’m forward looking and I didn’t skip my 4/15 payment, and I made it on time. Except that I paid only 50% of last year’s payment, because, I anticipate my income to drop significantly this year. This is going to be devastating for the state’s finances.

It is a good thing that Greedy Cops, Teachers and Firemen do not pay State Income taxes on their HUGE PENSIONS.

Dude, your comment was deleted for some reason, but if you read it, then this is the resource I told you about https://forexacademyusa.business.blog

Is there a way to determine the avg salary lost based on unemployment and personal income tax revenue? Does such a large decrease in PIT revenue imply more higher paid workers lost their jobs or took pay cuts?

We left in 2018,sold all the property for a good price and thank GOD for that.I would not like selling any thing in Illinois now.All the tax money we save now go’s for our fun and safety and security.It does not go to an Illinois crook, dems or rinos.It enriches or lives.But you have to go to RED state to live this dream.