Cook County lost nearly 49,000 people during the decade, the most of any county in Illinois. Winnebago and St. Clair counties were next, with losses of 12,500 and 10,700 respectively.

Lake, Peoria, Macon, Madison, Vermillion, Rock Island and LaSalle counties rounded out the top ten biggest losers of population – all of them lost more than 5,000 residents. For the full county-by-county data on winners and losers, see the tables in the appendix below. 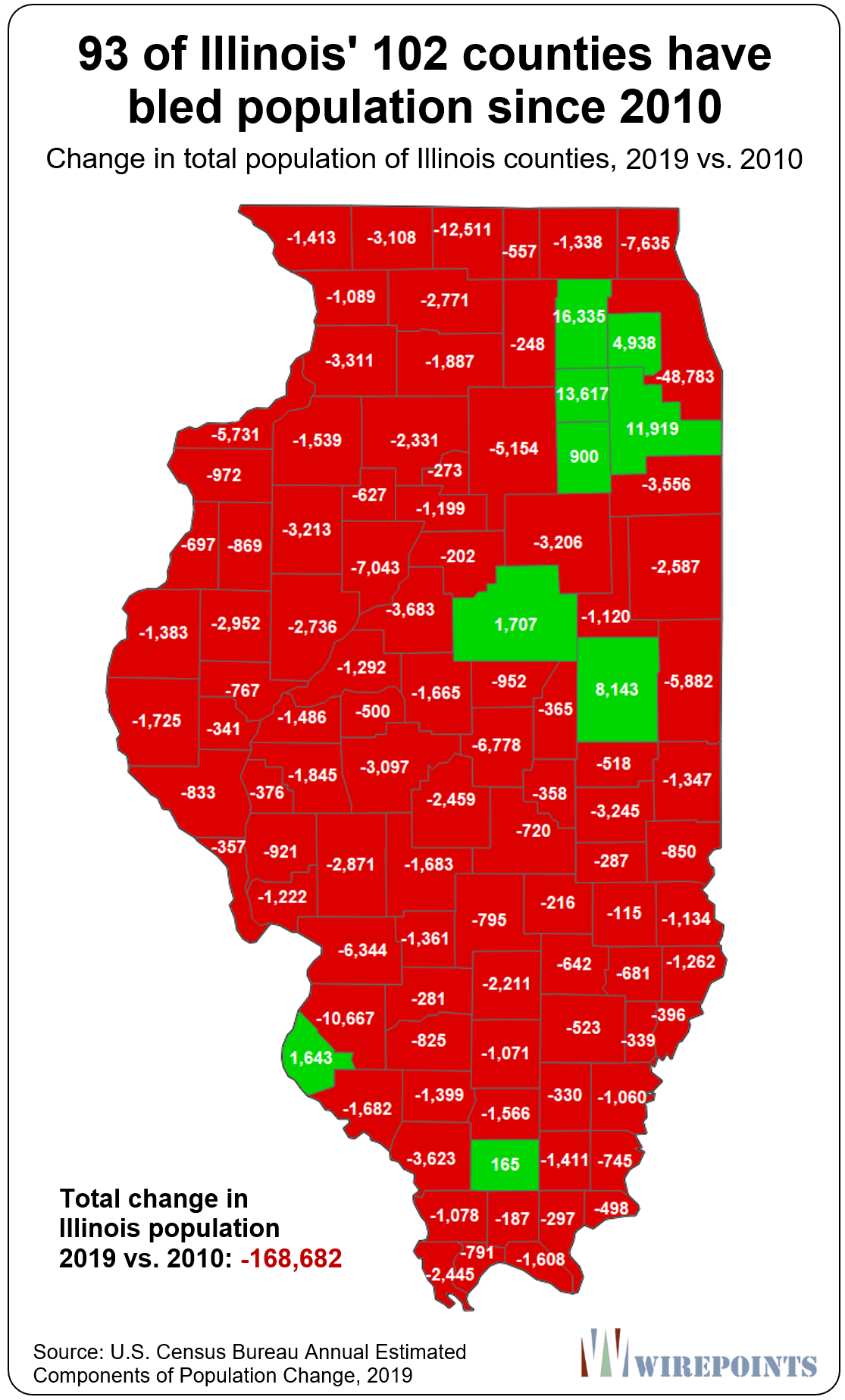 At the other end of the spectrum, just nine of the state’s 102 counties managed to gain population over the period. Kane County, the best people-winner in the state, saw its population increase by 16,000 since 2010. Kendall County gained 13,600 people. Will County was next with 11,900.

The only other counties to show growth were Champaign, DuPage, McLean, Monroe, Grundy, and Williamson.

The story gets even worse for some counties when losses are measured on a percentage basis. Alexander County lost 30 percent of its population, or about 2,445 people. Gallatin lost about 13 percent. Many already-small counties have emptied out at a pace of 10 percent or more in the last decade. 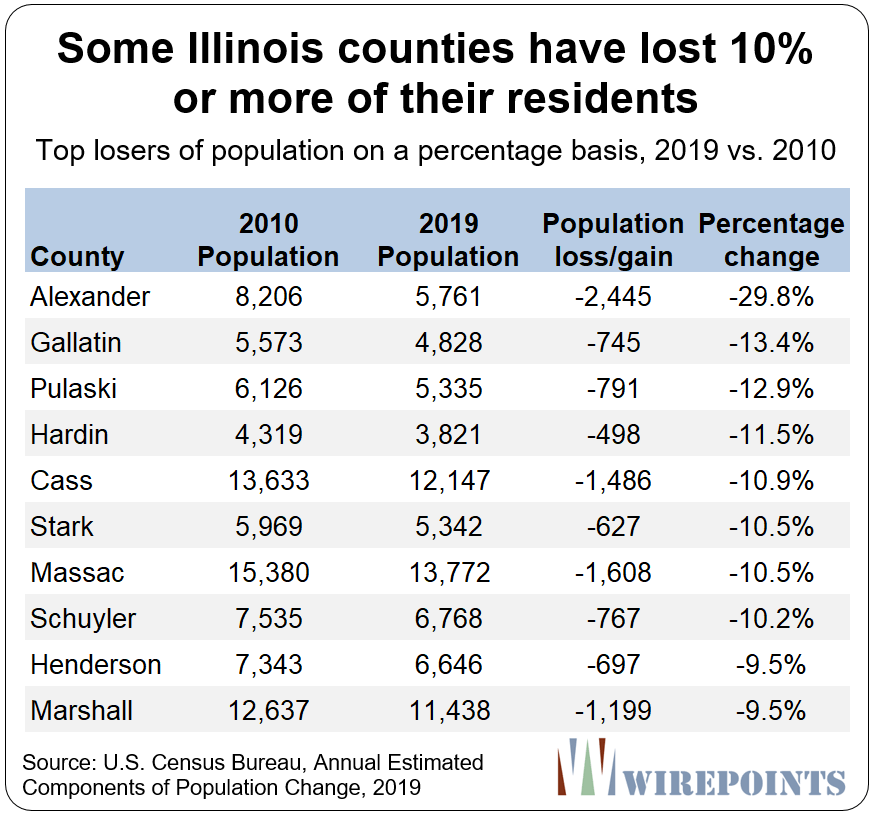 Collectively, Illinois’ downstate counties have suffered the worst loss of population, by far. The whole region lost nearly 144,000 people between 2010 and 2019, or 3.2 percent of its 2010 population.

However, that increase was largely at the expense of Cook County. Other migration data shows many Illinois residents move to the collars from Cook County. 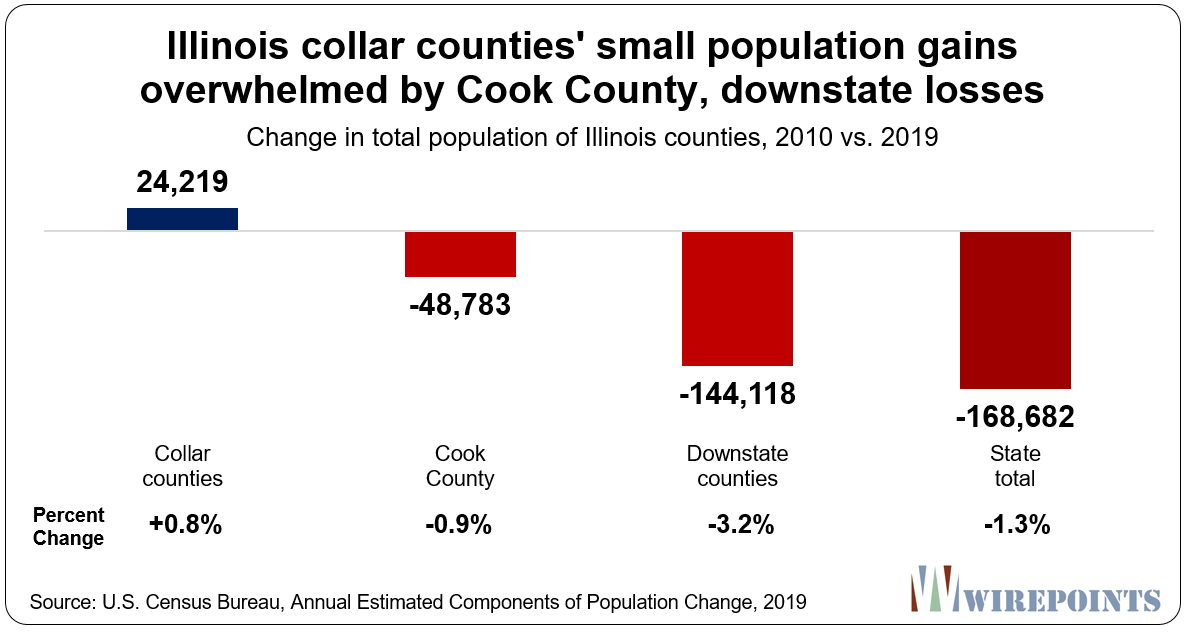 A 0.9 percent loss may not sound like much, but compared to the nation’s largest counties, Cook County is an outlier. Wirepoints analyzed the population change for the nation’s 50 most populous counties and found that Cook was one of just six counties to lose population since 2010. 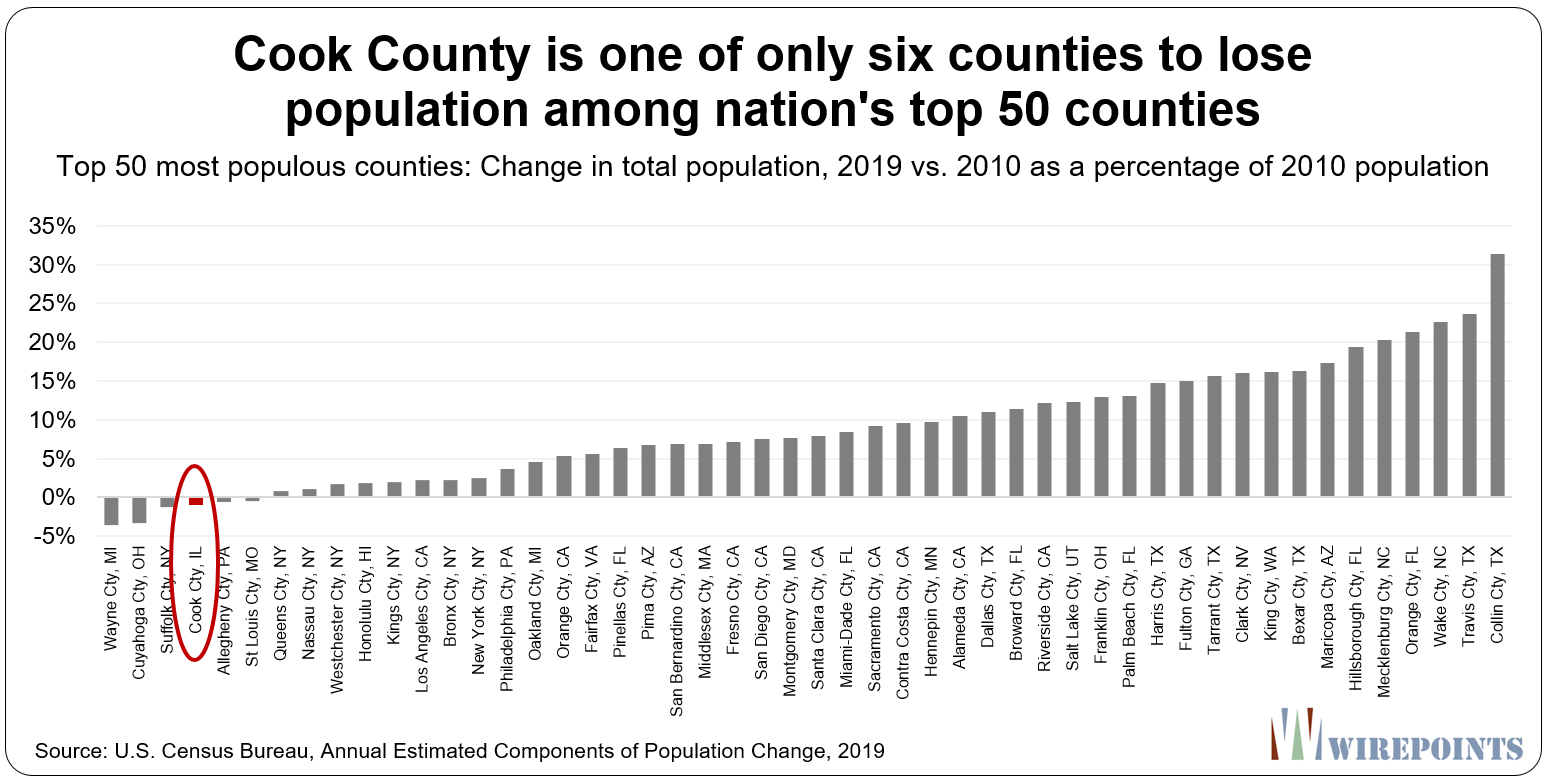 And overall, Cook County suffered the 2nd-worst loss of people of any county in the nation between 2010 and 2019. Only Wayne County in Michigan, home of Detroit, lost more. 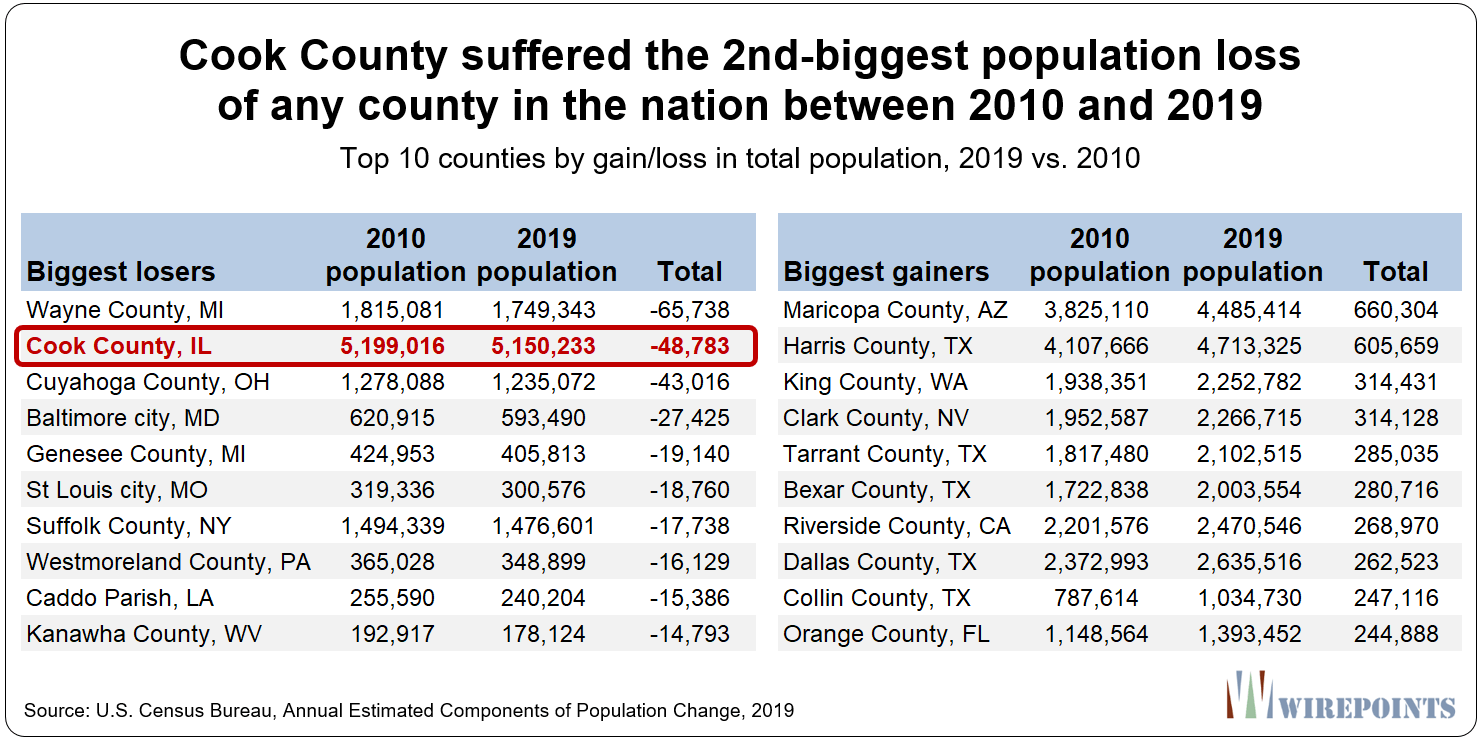 Add up all the losses and it’s no surprise that Illinois is the extreme outlier when it comes to population losses nationally. Only four states have shown losses, with Illinois leading the country in shrinkage. 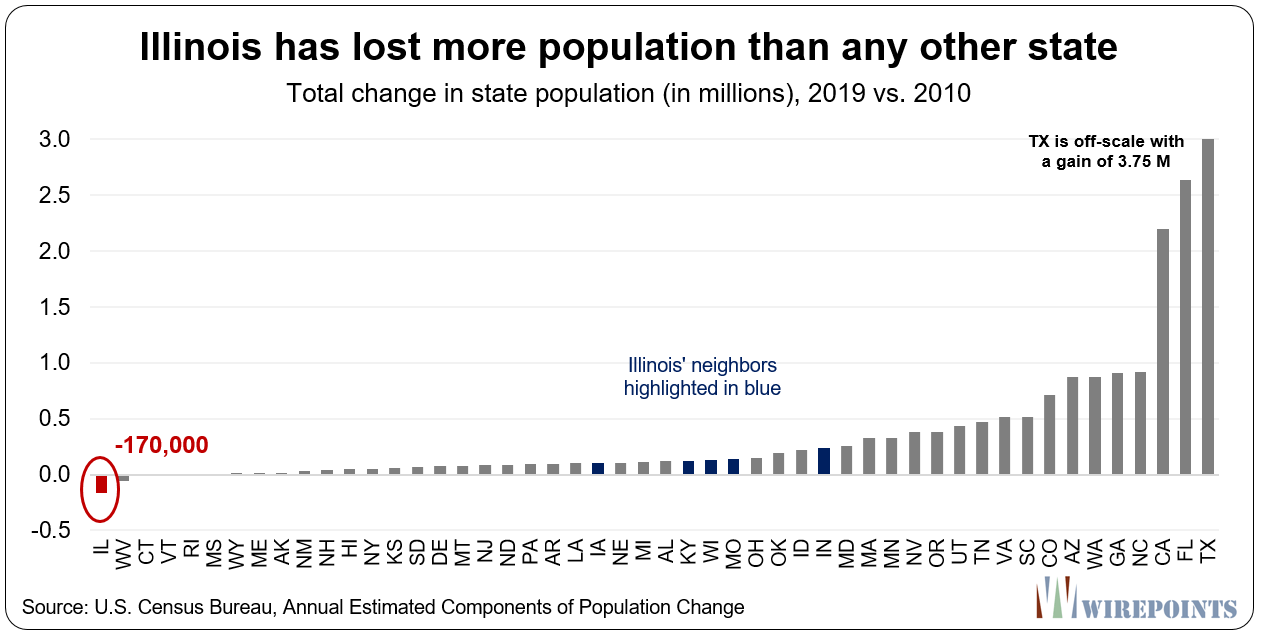 Think whatever you want, but Illinois’ brand of politics and policy is being categorically rejected year after year by far too many residents.

Until the state’s policies are flipped on their head – until Illinoisans finally get the big spending and governance reforms they desperately need – expect many more to uproot their lives to find opportunities elsewhere.

Read more about the crises in Illinois: 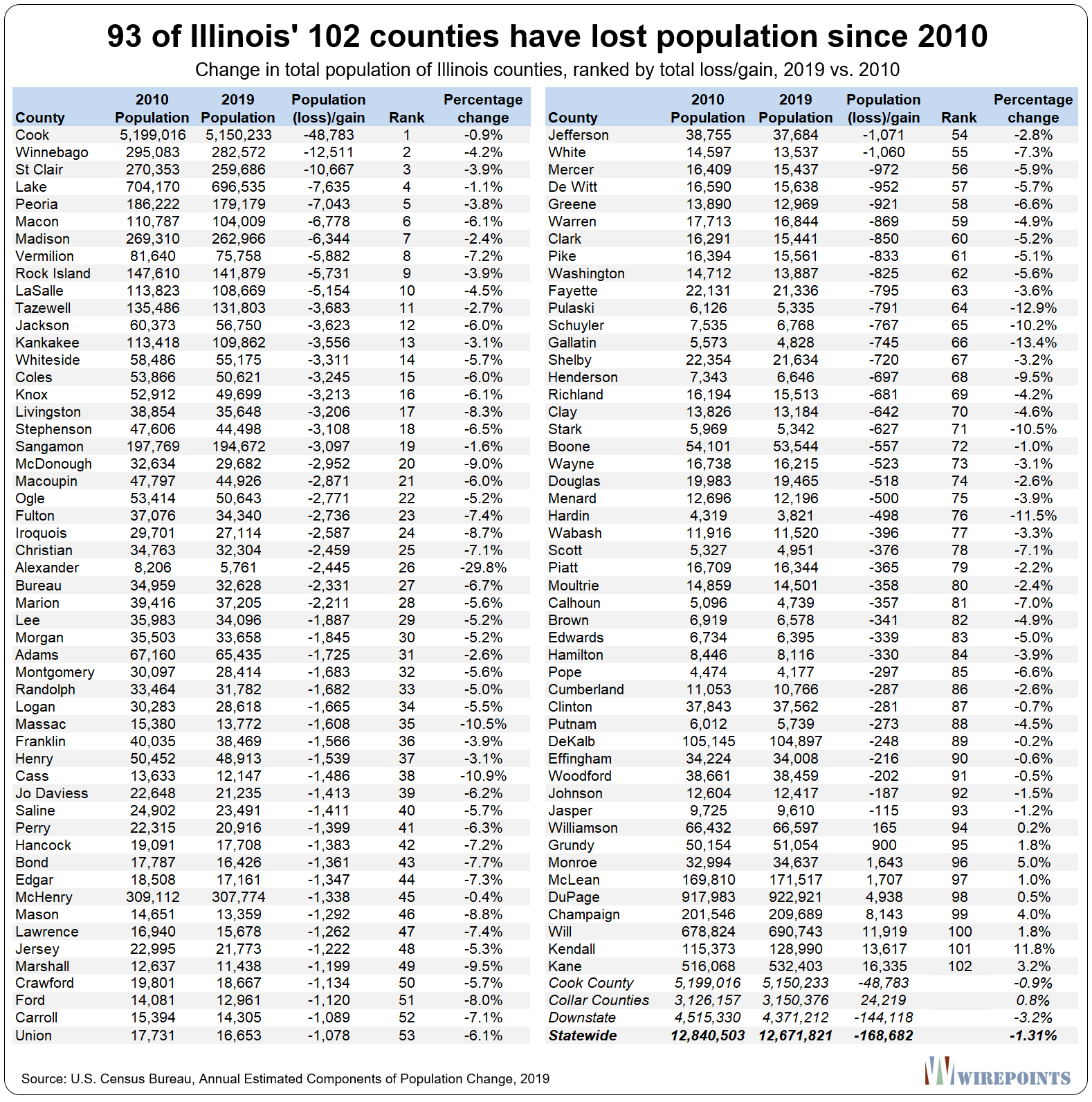 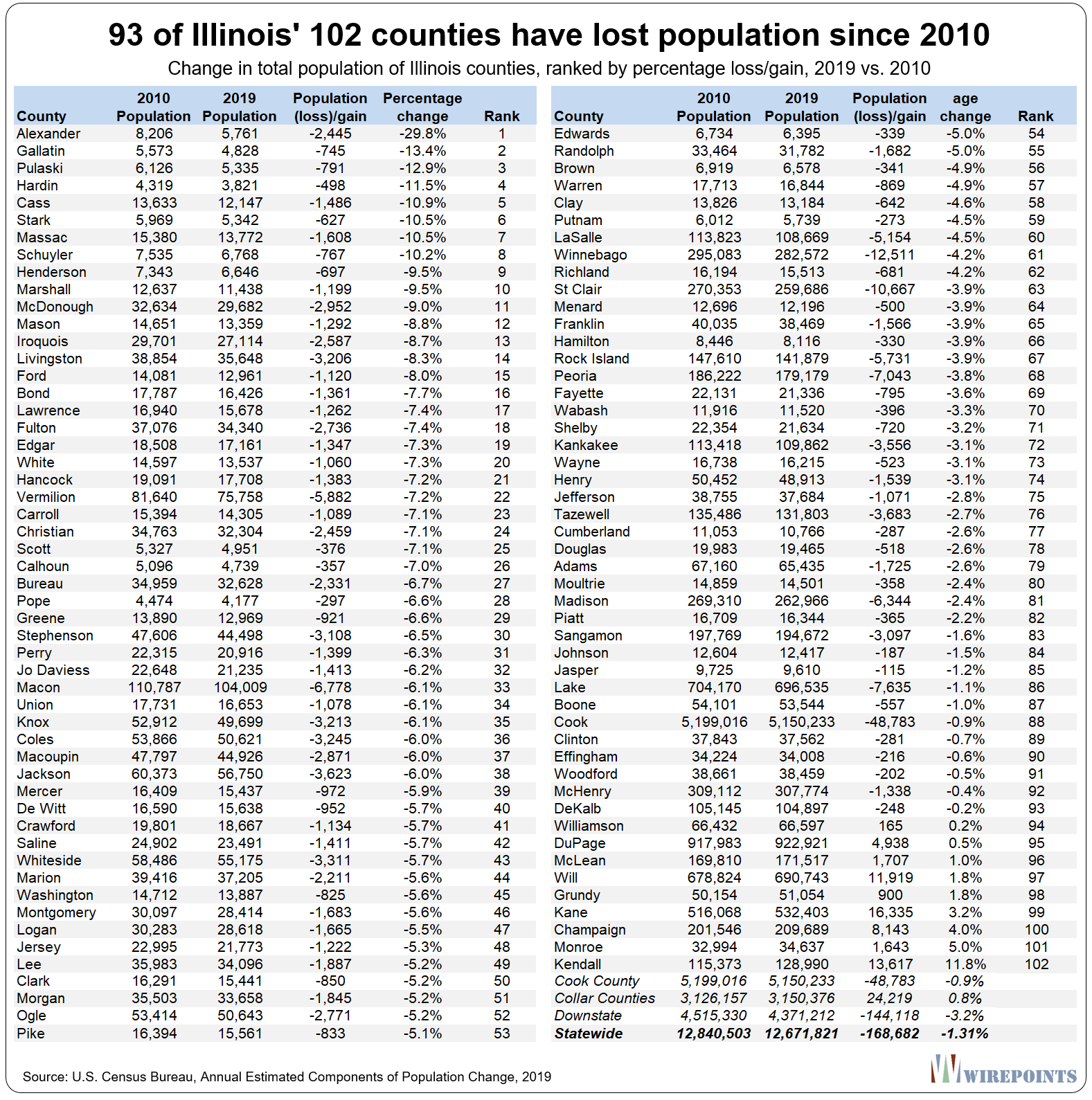 But, will IL lose a seat in Congress? Do the above stats. account for illegal immigrants currently in IL? Lastly, are departing Illini leaving their political philosophies in their rear view mirror?

0
debtsor
Reply to  Eugene from a pay phone

“But, will IL lose a seat in Congress” ~~ One, possibly two, depending on the outcome of leaving illegal immigrants out of congressional reapportionment. “Do the above stats. account for illegal immigrants currently in IL?” ~~ Yes, and even they are leaving too. With the service industry purposely being destroyed, there’s no work in IL anymore. “Lastly, are departing Illini leaving their political philosophies in their rear view mirror?” ~~ No, not really. If we are to believe the data from other states with exoduses like CA, it’s the middle class Republicans who are leaving and taking their population with… Read more »

My buddy owns a moving company. Usually starting in October he’s got his feet up on the desk waiting for the phone to ring. Past two years he’s been busy in his “slow” season. Knows other movers in New York that he cooperates with and they can’t keep up. Check what a U-Haul rental one way to Florida or Texas costs compared with a one way rental the reverse direction.

Moving to FL, TX, NC or TN from NY, NY or IL is at least twice the cost of the reciprocal move…

My wife and I retired last year and sold our west suburban home. We are now living in a mid south state. The really unfortunate event for Illinois is that although we raised all of our children in Illinois not one went to college or post college have decided to live in Illinois.
This represents a multi generational brain drain and probably will continue among other families for the foreseeable future.
Good luck to everyone who is stuck in Illinois. I wouldn’t wish this situation on my worst enemy.

I dont understand why the clowns that run illinois dont fly to texas,meet with the leaders there,ask exactly how theyre running the state of texas,then implement some of the same policies here,lots of people are moving to texas for a reason,but noooo,these boneheads here just keep on with the same tax and spend policies-i dont get it

It is because they are so full of themselves and their pride gets in the way they won’t ask any of the States that are doing it right. Also, they don’t want to make the hard choices, anyone can come in and do the same thing but a true leader seeks out help and better ways to do things and then makes the hard decisions. We don’t have that in IL or in alot of States in this country. They don’t do what is right for the people, only themselves and their cronies. But if we keep voting them in… Read more »

Because Illinois leaders are communists. The idea is to bankrupt the taxpayer. Money is power.

Bankruptcy is the only choice. Can’t do that without legislation. My advice is to run away as fast as you can. Relocate.

January 23, 2021
A sweeping, radical rule is pending for Illinois K-12 teachers that should prompt everyone, of all political stripes, to fear about the fundamental roles that teachers and classrooms are assigned to fulfill.
View Comments (54) | Add Comment