An analysis of data from Dec. 2, Illinois’ single-deadliest COVID day, shows the elderly continue to dominate the state’s fatalities.

Of the 238 deaths reported that day, 220 deaths were over the age of 60. That’s 93 percent of all deaths. In contrast, there were no fatalities under the age of 40. 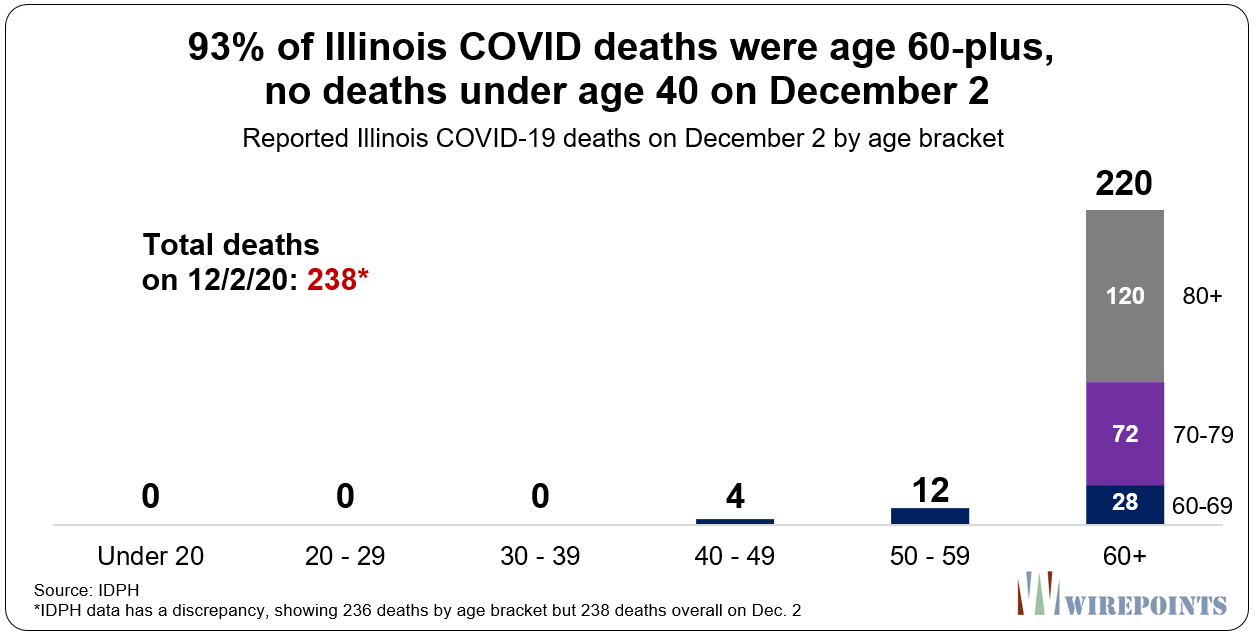 The numbers were similar the day before. Dec 1 deaths totaled 125. Nearly 95 percent of fatalities were those over the age of 60. In contrast, there were no deaths under the age of 50. 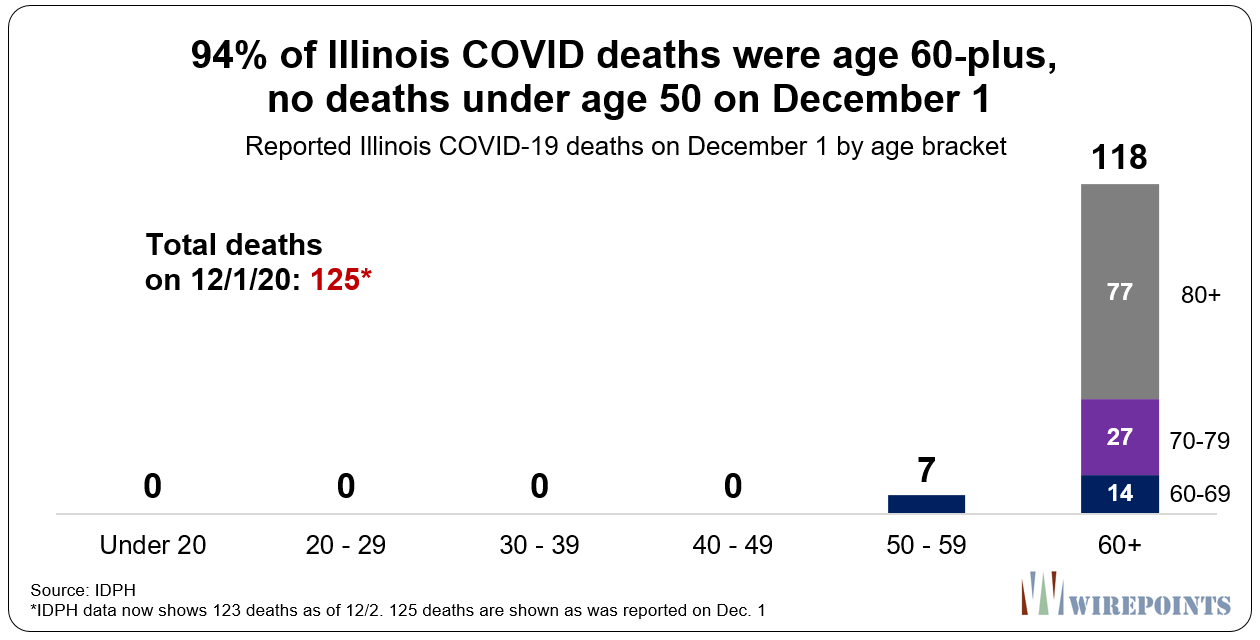 Those aged 60 and older have dominated Illinois’ fatalities since the beginning of the pandemic, with half of all COVID deaths linked to retirement homes. That hasn’t changed with the recent rise in cases, hospitalizations and deaths.

Sadly, long-term care facilities haven’t gotten the attention they’ve needed since the pandemic started. It’s only now that they might get more notice, the result of an outbreak at the LaSalle Veterans’ Home in LaSalle, Illinois. Nearly 90 percent of the residents at the home have been infected with COVID and 28 have died.

The incident is now facing several independent inquiries, including a federal investigation. State-run veterans homes are managed by Illinois’ Department of Veterans Affairs, which is run by Linda Chapa LaVia.

It’s good news that the state’s poor handling of retirement homes is finally being looked at. But the damage has already been done. A reported 6,000 Illinois residents of Long-Term Care facilities have already died due to COVID.

We’ve previously written about the state’s failures, as has the Chicago Tribune. But it hasn’t been enough to get the state to change its methods. Long-term facility deaths continue to make up between one-third and one-half of all deaths each week.

Hopefully, this latest scandal will get the state to change its priorities and focus more closely on those that need protection the most: retirement home residents, the infirm and the elderly in general.

Read more about COVID-19 in Illinois:

Zinc Ionophores (quercetin and green tea extract) and Zinc Citrate, Ivermetcin – all things that will prevent and/or cure COVID19.

Blaming the flu as COVID isn’t helping at all.

Thapedi said he was withholding judgment on Pritzker’s actions or the performance of Illinois Department of Affairs Director Linda Chapa LaVia, with whom he served in the Illinois House for a decade. But Thapedi said using the power of the committee to investigate the handling of the outbreak and its root causes is his obligation as committee chair. “It’s definitely a legal matter, a civil legal matter, and definitely within the province of the Judiciary – Civil committee,” Thapedi said. “I have a duty and responsibility to the people of the state to make sure that all civil-related matters are… Read more »

JB is a moron.. I don’t enjoy taking shots at the person, but, seriously. While we call for the dictator of Madiganistan to be run-out-on-a-rail, I fail to see why there is no outcry for this goof to be removed due to incompetence…. Illinois, WE WILL GET THAT FOR WHICH YOU IDIOTS VOTED. And I, having not yet left, deserve the fruits of your stupidity.

I’m not having some overweight unhealthy “health official” tell me what’s “good” for me.

Intelligence and knowledge generally are intertwined. Self discipline doesn’t have to be part of that soup necessarily. People do unwise things all the time while simultaneously knowing its not in their best self interest. Any advice given is not necessarily bad advice even if given by a bad role model for it. So, what you are doing is simply reducing your set of people who may well be good advisors. Its your choice, of course.

Of course, advice is always better when accompanied by actual data that supports the recommended course of action. Common sense helps too.

According to pritzker its those darn bars and restaraunts causing all the problems,kinda funny so many elderly have covid that never set foot in bars and resteraunts,half the so called covid death numbers are fake stats with other causes of death but the main steam news still reports on the number of cases and deaths as if theres no false stats,you cant beleive half of whats reported!

The rollout of the ‘Trump drug’ Regeneron (synthetic antibody) and the Pfizer vaccine is happening – implementation is underway with distribution next week. The vaccine of course is first going to the most vulnerable – medical staff and the health department will rollout the vaccine to the elderly in care facilities and elsewhere. The cure and vaccine are due to the Presidents leadership with ‘Operation Warp Speed’, with results in less than a year!. None of this is happening because of Democrats, at any level. Pritzker did next to NOTHING to protect the most vulnerable. Rather Pritzker chose to politicize… Read more »

Pritzker decided to try and scare everyone and influence elections instead of focusing on those most at risk. As a result the Illinois economy is totally trashed and Illinois has a horrible performance relative to Covid deaths. The liberal media will do their best to protect him, but make no mistake, he has blood on his hands.

Pritzker needs to be arrested and tried for crimes on the elderly and are veterans.

January 22, 2021
A sweeping, radical rule is pending for Illinois I-12 teachers that should prompt everyone, of all political stripes, to fear about the fundamental roles that teachers and classrooms are assigned to fulfill.
View Comments (3) | Add Comment