The Chicago Teachers union continues to prove itself as the most extreme union in the nation.

After nine months of failed remote learning, CBS reports that the CTU is now openly threatening to call a strike vote as early as mid-January to keep teachers out of classrooms. A new strike would be the union’s fourth in less than a decade and it would come just 15 months after a two-week walkout in October of 2019.

The union told its members last week to resist returning to classrooms on January 4, when preschool and some special education teachers were to go back to school to prepare for in-person classes beginning Monday, January 11.

As a result, only half of all teachers scheduled showed up for work. For its part, CPS has warned that teachers who don’t show up will face disciplinary measures, up to and including being fired. The district has finally toughened its stance on returning students to the classroom, with CPS CEO Janice Jackson saying it’s “the district’s obligation – it’s a moral obligation – to make sure that those students are learning and getting access to the education they deserve.”

The CTU is also using the pandemic crisis to renew its push to get SB 2275 passed, a bill that would give the union the ability to negotiate on and strike over anything related to their teachers’ contract.

Current law says the CTU can only officially negotiate over salaries. (Though that hasn’t stopped the union from demanding completely unrelated items during negotiations, from defunding the police to rent relief for teachers.)

A further escalation at the district is likely, though the union doesn’t have much of a leg to stand on. Here are ten facts that show the CTU is wrong to resist reopening classrooms:

1. The CTU says that because just one third, or 77,000, black and Latino families selected in-person learning, that parents don’t really want it. That fact actually hurts the union’s argument, as the limited number of students actually makes it far easier to perform and maintain required safety protocols.

2. Half of all teachers failing to come in may sound like a lot. But considering CTU’s strike votes usually achieve 90 percent-plus approval, that’s actually a severe blow to the union’s projected image of power.

3. The Catholic Archdiocese of Chicago provides a direct example of how schools can open safely. Over 2,000 Catholic school teachers of the Chicago Archdiocese have been teaching in-person, five days a week, to 34,000 city students since the beginning of the school year.

4. There’s still no legitimate risk of children acting as vectors of the virus. In fact, all data, nationally and internationally, seems to keep showing that schools are not transmission hotspots. UNICEF recently wrote: “Schools are not a main driver of community transmission, and children are more likely to get the virus outside of school settings.”

5. Nearly 80 percent of CPS teachers are under age 50, which according to the CDC means that, even if they were infected, they have a survivability rate of 99.98 percent. 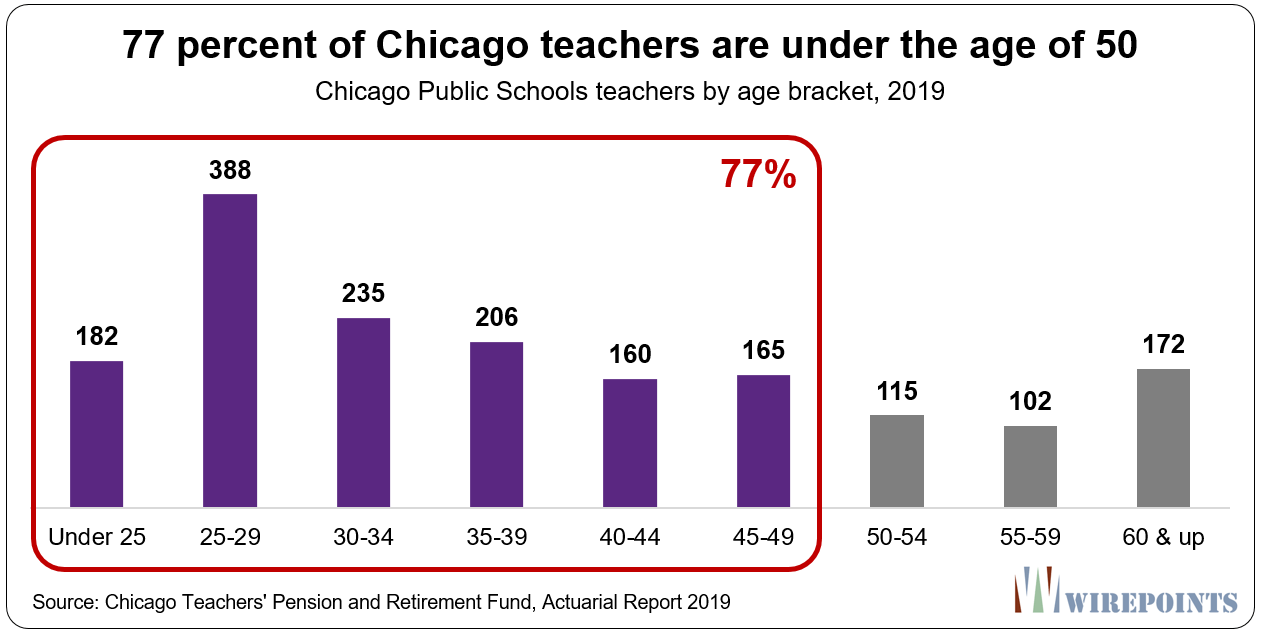 6. Only two Chicago children aged 17 and younger have died from COVID-19 since the virus first appeared, according to the city of Chicago’s latest coronavirus data. While every death is a tragedy, fortunately Chicago’s children haven’t fallen victim to COVID-19. The long-term cost in lives and suffering of further depriving the 355,000 children of meaningful education undoubtedly would be far worse. 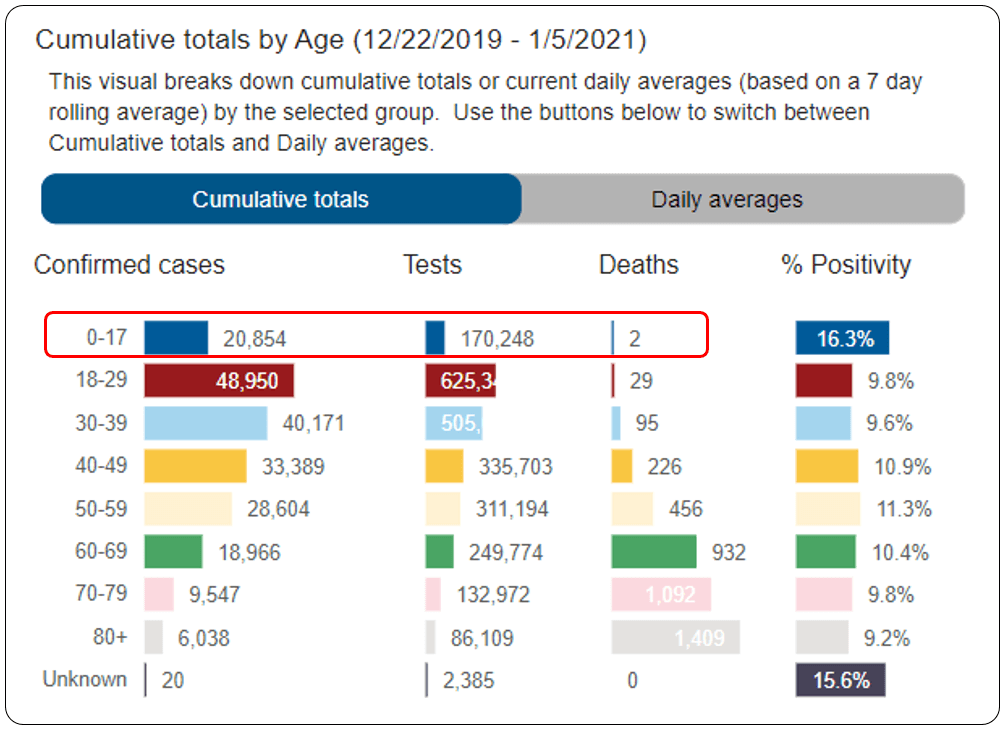 7. Keeping hundreds of thousands of kids out of school creates all kinds of other damage. As we’ve noted in a recent piece, the risks of dying by homicide far exceed the risk of death by COVID. As of December 29, five Chicago youth under the age of 20 had died from COVID, but 109 had died as a result of homicide. That’s 22 dead from homicide for every one COVID death.

8. Chicago teachers are currently getting raises from the “most generous” contract they’ve ever received – all without having to teach in-person for over nine months. 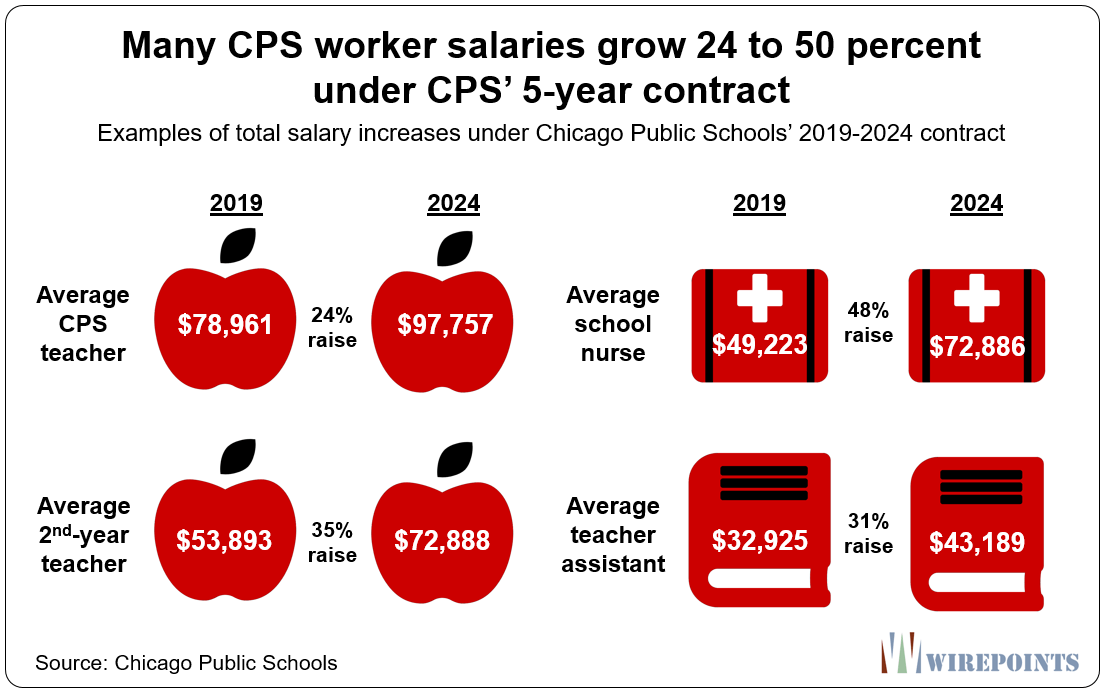 9. Students and their families are already fleeing their schools and you can’t help but think the flight will get dramatically worse as this school year’s full impact is felt – especially if the union ends up striking again. In 2000, CPS’ enrollment was 435,000. This year, it’s down to 341,000.

10. If the CTU strikes again, it could prove the breaking point for many parents that have supported the union and teachers in the past. The union is doing itself no favors this time. A union executive tweeting from her poolside in Puerto Rico that it’s unsafe to teach in-person has already generated a PR nightmare.

This is just the latest development of a fight that’s been going for almost as long as the pandemic:

Public “schools” are an anachronism. One can learn more in a week on the Internet than in a year in “school”. Fire those union bums!

Retail workers, nurses, construction workers, cops, auto mechanic’s, accountants, etc….and on and on are at work or dying to go back to work, dealing with the public, covid or no covid. It’s only our elite/ entitiled/ majority white /upper income ctu hero’s who feel shamelessly entitled to use covid pandemic along with illinois teacher union friendly laws for increased political power and I’m when alls said an done finacial gain on tbe backs of low income kids of color. And yet demand the title of progressives??

I notice that the redshirted obese pig picture has been replaced. Why not just make the “Red Pig” the permanent CTU picture for wirepoints?

It just says so much about them…

If the universe is still working, market forces will always fill vacuums. The popularity of home schooling cannot increase unless a vacuum in public schools begins to push parents to that alternative. The popularity of quality paid private online educational services also benefits from the vacuum. Private schools too. And the other big vacuum where parents begin to see that the CPS product itself is inferior even with 100% of the teachers showing up. That vacuum needs filling. Responsible parents will go to alternatives, even if they are paying double to educate their kids with property taxes and private fees.… Read more »

ABOUT US
© Wirepoints Corp. 2012 - 2020. All rights reserved.
Contact us: admin@wirepoints.org
FOLLOW US
wpDiscuz
5
0
Would love your thoughts, please comment.x
()
x
| Reply