The Illinois Governor’s Office of Management and Budget (GOMB) has released its five-year budget projections. The forecast, not surprisingly, is alarming. Spending continues to outpace revenues by a large margin.

Those projections actually undersell the trouble Illinois is in. GOMB’s deficits are based on the state’s phony accounting. The state’s budget doesn’t properly account for the state’s true retirement costs and significantly underreports what’s needed to keep those liabilities from growing (at least another $3 billion annually).

Regardless of their size, the consequences of Illinois’ future deficits will be an escalating pile of unpaid bills. By 2024, GOMB projects a total of $24 billion in unpaid bills, equalling more than half of the state’s annual revenue. That’s higher than the $16 billion in bills owed at the height of the budget impasse. 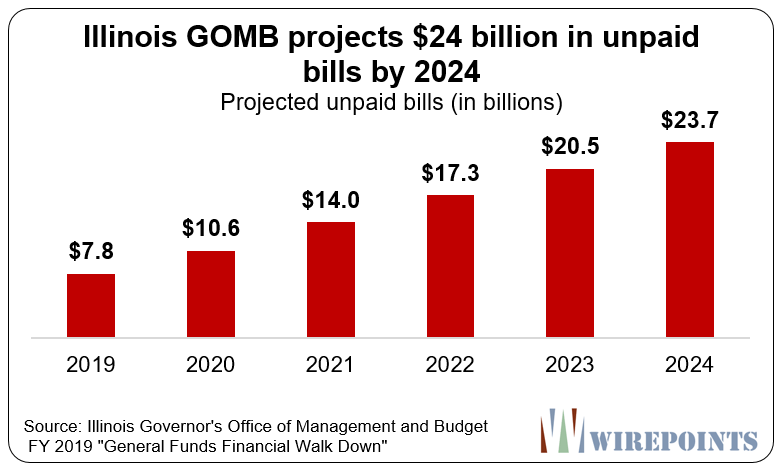 This is Rauner’s last budget projection before leaving office, so some could argue that the above predictions are too dire. But there’s little in GOMB’s projections that could be said to be exaggerated. After all, Illinois has run deficits for years and the state hasn’t had a truly balanced budget since 2001. Even before Gov. Bruce Rauner took office in 2015, the state had already run an unpaid bill backlog of as high as $9 billion.

On the revenue side, GOMB says it used a “pessimistic economic forecast scenario” that factored the potential for a recession. Considering the state of the markets and Illinois’ recent history of anemic economic growth, that’s not an unreasonable assumption.

And on the expenditure side, GOMB didn’t include “any significant reforms or spending controls.” That’s also not unreasonable seeing as lawmakers have refused to change their spending habits during the last three years.

On top of rapidly growing operational expenditures, Illinois has other costs contributing to the deficit. GOMB projects over $2 billion dollars in annual debt payments to pay down bonds issued for capital, pensions and unpaid bills. And newly-owed back pay due to state AFSCME workers will add another $200 million a year in additional costs.

Plus, it’s likely GOMB is underestimating spending. Illinois’ priorities are likely to change dramatically under Gov.-elect J.B. Pritzker’s administration. Wirepoints has outlined Pritzker’s multi-billion spending promises and how he might fund them in What Pritzker’s progressive tax rates will probably look like.

Pritzker will find himself in a difficult position when he takes office. With at least a $3 billion deficit as his budget base, it’s hard to see how he’ll follow through on many of his promises.

The bottom line of GOMB’s forecast is clear: Illinois will be in worse shape than ever despite record tax revenues.

It’s impossible to see how this can continue without dramatic spending reforms – or an eventual fiscal crash.

Maybe Pritz can donate a couple of billion annually? Now that would make him a man of the people.

It looks to me like they have revenue growing just over 9% on a simple basis from 2019 through 2024. They call this pessimistic? I realize there has been growth through this expansion period, but I believe the combination of a recession, outmigration, business relocation, and lower overall economic activity will potentially stagnate this state much more severely than this. I don’t know enough about government fiscal norms to say that revenue could ever go down, but it makes me wonder — is there anyone in the know that has ever seen negative growth at the state level? Could that… Read more »

This is why I moved out of Illinois.

At what point do the lenders say ‘no more’? I don’t understand how this borrowing just continues given the possibility Illinois can’t repay the loans. Illinois can’t print money, so what happens when Illinois fails to repay the loan? If the choice is to pay pensions or repay a loan, which has precedence?

In other words, Illinois would need a 5.75% income tax rate plus the tax revenue from legalized marijuana just to break even.

Nixit, you are correct. GOMB does not include the Pritzker spending plan in its projections.