Expect the doubling of Illinois gas taxes to anger Illinoisans this summer. On July 1st, the state’s motor fuel tax increased to 38 cents per gallon from 19 cents. The state says the tax, which has not been increased since 1990, will fund capital improvements throughout the state.

Illinoisans have long been frustrated by higher gas prices in Illinois. In addition to paying the motor fuel tax, Illinoisans also pay a 6.25 percent state sales tax on gasoline purchases. Many residents also pay additional city and county sales taxes. Illinois is only one of seven states to hit consumers with a sales tax at the gas pump.

This state’s 19 cent jump is nearly double that of Ohio’s and nearly quadruple that of California’s. 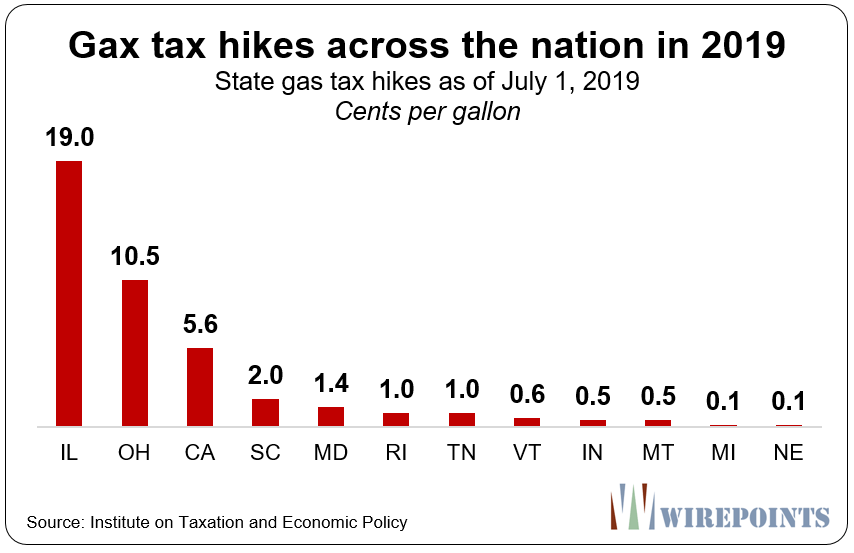 Many of the other states on the list grew their taxes because their taxes are linked to the price of gas and/or inflation. Illinois is about to join that list of states. The state’s gas tax will now grow every year with inflation instead of staying flat.

The massive jump this year will skyrocket Illinois to near the top of the national ranking for combined taxes on gas.

Before the hike, Illinois’ gas taxes ranked 21st in the nation. After taking into account 2019 tax hikes across the nation, Illinoisans will pay the 3rd-highest combined taxes on gas.

That’s painful. And remember what that hike is going toward: an absolutely massive, unvetted, politically-motivated, pork-filled capital bill.

People are leaving stickers on the pumps that say F*ck JB.

Illinois and Chicago employs three to four times as many people as they need. They can easily reduce the work force by more than two thirds. This would save millions of dollars and they wouldn’t have to keep raising taxes. Illinois is not only corrupt, it’s pathetically corrupt.

Hahahah it’s not about saving money, it’s about forcing the middle class Republicans in ex-urban and rural areas out of the state. They want us gone. That’s the goal.

Get Madigan a nd his fronts out of office

I didnt vote for JB. But I will have to pay for the mistake a lot oif you made when you did.

I drive up to Wisconsin fairly often in the summer. Always run the tank low before I go up there. I will put a couple gallons in to get up there, and then fill it up once In Kenosha. Feel good that I have found my little way to fight the man. Purchase all my liquor up there too. Such arrogance, and they think we won’t do something about it. I would not want to own a gas station or sell liquor or cigs near the borders. Those businesses are going to dry up.

It would have happened no matter who won the position.

Only because the legislature is a super majority that would have overridden Rauner’s veto.

You won’t have to pay if you move out of Illinois and to Indiana.

More burden upon the working class & adding to the struggles of the poor! Those that struggle to meet basic needs.

Our politicans don’t want the you – the middle class – in the state. They want poor people taking buses and trains and rich people Ubering. The middle class tends to vote Republican. SO they must be banished from the state.

This is NOT a “Rich” person tax quite the opposite, the price of gas is simply not important to rich people. JB is going to continue tax the middle and unfortunately with this most critically those who are struggling and just trying to make the next paycheck.
The fair tax is a divide an conquer and the middle class where the money predominantly is will be squeezed to pay of the sins on Illinois politics.

Really bad tax. This is going to hurt the poor guy that has to drive because he lives in an area poorly served by public transportation or has to drive for his job. Those are the people that spend every penny that they have and now they’ll have less to spend. My problem with this tax ist that it’s going to hurt the economy of Illinois. About the only good thing is once this tax hits is the people that voted for Pritzker will realize the mistake they made.

Agreed. Don’t forget that every municipality needs gas for police-fire-school buses-slow plows-etc and they will pass that cost to us by increased levy’s. Now add in every commercial business like UPS-Fed Ex-truckers-etc plus the cost of license renewals that will passed on in increased charges. Is there anywhere in the budget for maybe? some subsidies to local municipalities for less corrosive road salts(maybe beet juice added in) to reduce road and bridge damage plus damage to autos from rust? Don’t think so. This is a double whammy for sure. They could of just raised it a few cents to begin… Read more »

I’m pretty sure govt vehicles are exempt from the motor fuel tax. Per the tax code:

“A distributor may make tax free sales of motor fuel, with respect to which he is otherwise required to collect the tax…When the sale is made to a municipal corporation owning and operating a local transportation system for public service in this State when an official certificate of exemption is obtained in lieu of the tax.”

Just curious. Are airlines subject to this tax?

Do you think politicians care? They should be walking or taking the bus… because carbon!