Don’t think that the Janus ruling by the Supreme Court will change how credit agencies rate Illinois. The decision, which allows public workers to opt out of union membership, didn’t fix any of Illinois’ problems overnight and the state is still on a trajectory towards a junk rating – now just one-notch away.

That said, it wasn’t surprising when a breeze of optimism hit Illinois after the court decision. Moody’s Investors Service quickly commented on the positive impact the ruling will have on the finances of the 22 states affected by the ruling – union coffers will shrink as members opt out, and that means less bargaining power for the unions. As Moody’s Vice President Emily Raimes tweeted: “These developments could change how state and local governments set employee wages and pensions, resulting in a positive long-term impact on government finances.” 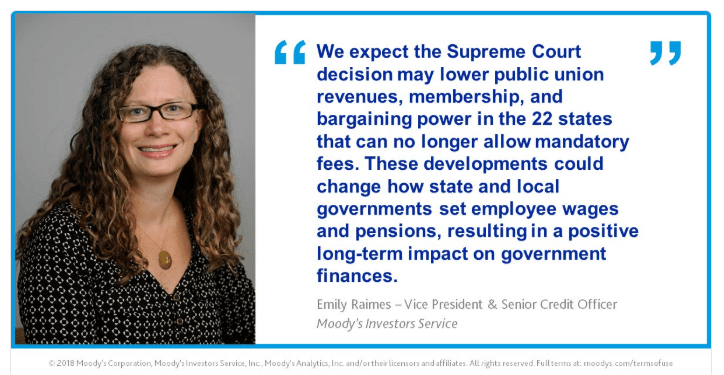 It would be a mistake, however, to think she was including Illinois in her comments.

For one, Illinois has zero margin for error for getting out of its fiscal mess. When the next, inevitable recession comes, the state has no reserves. As the Illinois Policy Institute recently reported, the state has reserves for just 81 seconds of state spending. And with pension costs still skyrocketing, a budget still grossly unbalanced – even under the government’s phony rules– and what can only be described as disastrous governance, rating agencies would be foolhardy to upgrade Illinois based on the Supreme Court ruling. Barring massive reforms, Illinois won’t make it out of the next recession.

Second, don’t expect Illinois unions to roll over as a result of the Janus ruling. They’ll do everything they can to block union members from opting out. Joe Lehman from Michigan’s Mackinac Center does a great job laying out what unions have done in other states to make opting out extremely difficult – read that editorial here. If there are unions in this country that will be effective at blocking the implementation of opt out campaigns, it will be Illinois unions. In particular, watch the actions of the Chicago Teachers’ Union – they are among the country’s most militant.

Third, union participation is very high in Illinois, especially at the state level. More than 90 percent of state workers are unionized. And including local governments, Illinois’ public sector is much more unionized than its neighboring states (see chart below). Almost 50 percent of all government workers in Illinois participate in unions. That compares to just 23 percent in Indiana and 19 percent in Missouri, or 24 percent in Kentucky. Wisconsin unionization was at 37 percent.

Leaving the union won’t be an easy decision for those who want to opt out. Expect there to be lots of intimidation, open or otherwise.

Last, opting out will be difficult for many Illinois government workers, no matter how right it may be for them. Illinois unions over the past two decades have bargained for salaries and benefits exceedingly better than those in the private sector. Never mind that those public-sector benefits are driving the state and local governments into the ground. Union members considering opting out will for sure take those benefits into account.

The bottom line is that the Janus decision will take time to bear fruit in Illinois. While it provided a key step towards long-term solutions, little will change until Illinois’ draconian collective bargaining laws are greatly rolled back. For any long-term positive impact to come about from the Supreme Court ruling, strike and binding arbitration laws must be repealed and local governments must be given power to bring costs down to what their residents can afford. 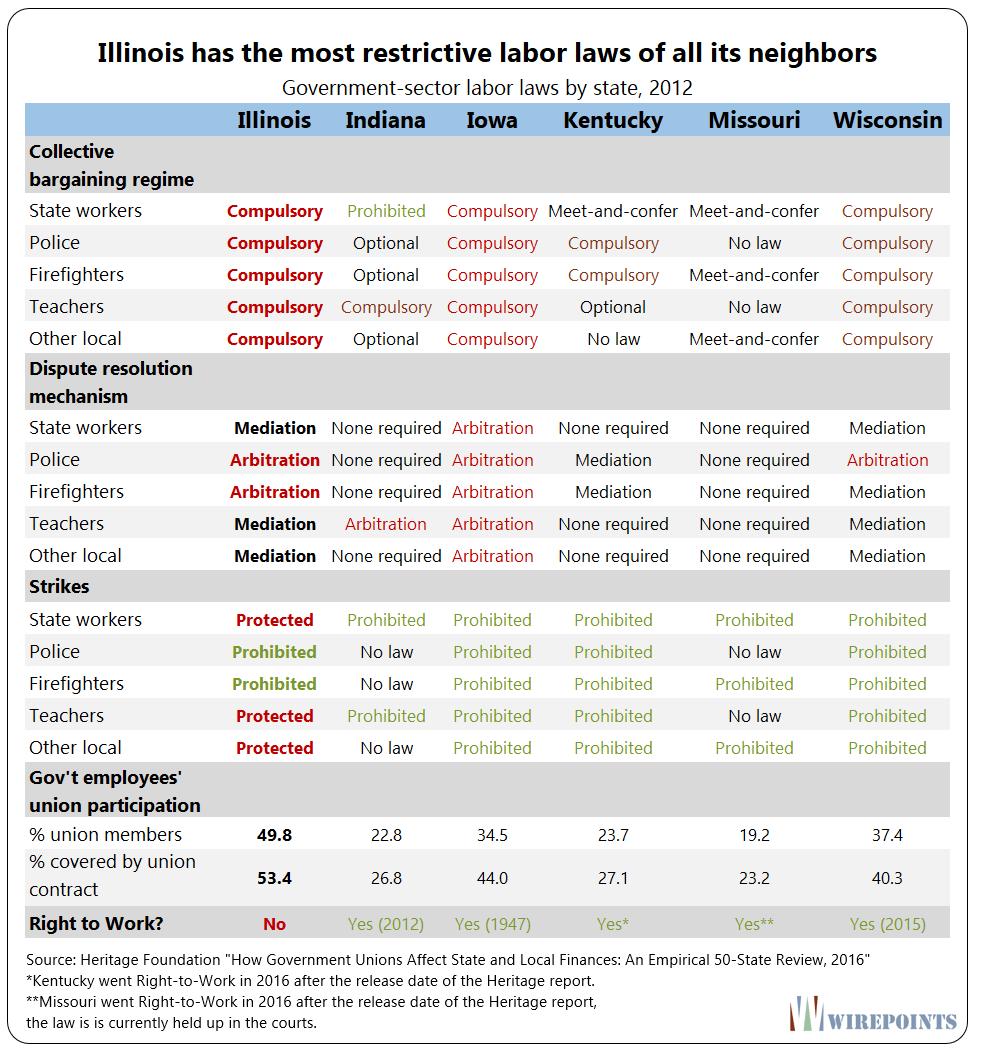 And without real pension reforms – from changes to the constitution to implementing defined contribution plans to allowing for local bankruptcy – nothing else really matters.

But Janus will only mean something to Illinois’ fiscal future when the state rolls back the laws, mandates and costs that are bankrupting this state and the lives of ordinary Illinoisans.

The Janis decision didn’t address how governments can harass threaten and fire employees who opt out. In Illinois since the union IS the government, they will put the screws down on anyone wandering off the plantation. With firing threats and firings.

Your are right, Rick. See this article here to see how the unions impact opt outs.
https://www.usatoday.com/story/opinion/2018/06/28/supreme-court-janus-afscme-union-dues-undermine-law-column/737870002/