By: Ted Dabrowski and Beth Feeley

The Wilmette Village Board is voting for a second time on a Cook County ordinance that mandates higher minimum wages and more sick leave days on Wilmette businesses. Here’s a summary of what it’s all about and why it’s a bad idea for Wilmette businesses and their workers:

What is the minimum wage/sick leave controversy about? The Wilmette Village Board is voting for a second time on a Cook County ordinance that mandates higher minimum wages and more sick leave days on Wilmette businesses.

The Board already rejected the mandate once on June 27, 2017, opting out of the county ordinance. The board is now doing a revote, as it said it would last year. The board originally questioned the legal authority of Cook County to impose these mandates and wanted more time to study the issue.

What are the Cook County mandates? The mandate requires the $8.25 minimum wage for Wilmette’s private sector businesses to rise as follows: to $11 in July 2018 and then by $1 each year until it reaches $13 an hour in 2020. The hikes represent a 58 percent wage increase over just two years. After that, the yearly minimum wage would rise automatically with inflation. The ordinance also imposes a minimum number of sick days for employees. 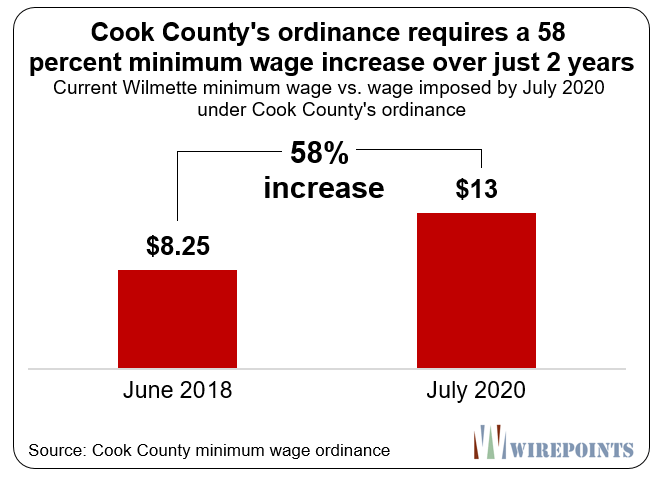 The ordinances come with more than 80-pages of rules and regulations that Wilmette businesses must follow.

Why is this vote controversial for Wilmette? By opting into the ordinance now, Wilmette would create an uneven playing field for its local businesses and workers. That’s because more than 80 percent of Cook County communities have already rejected the mandates, including nextdoor neighbor Glenview. If Wilmette adopts the ordinance, it will cost businesses more than in all those other communities.

To understand why that’s a problem, consider the case of Cook County’s failed soda tax hike. The tax had a real, pronounced negative impact on Cook County businesses as consumers went right over the border to shop.

Wouldn’t a higher minimum wage guarantee more money for all workers? Forcing higher minimum wages might benefit some workers, but higher costs and increased regulations on small businesses can mean other workers lose hours, benefits and even their jobs.

Some businesses may even be forced to close. Retail margins are very thin and when the economy weakens or as internet and big-box pressure increases, small businesses run the risk of closure. And that means fewer jobs.

Additionally, these mandates create “barriers to entry” for new businesses and entrepreneurs before they even get started. Bottom-line, more costly mandates from Cook County can only threaten Wilmette’s downtown and its workers.

Even in a thriving national economy, Wilmette has many empty storefronts. With the loss of Carson’s in Edens Plaza and the Jaguar dealership, plus increased pressure from online shopping, Wilmette businesses need measures that help them, not squeeze them further. Fewer businesses mean fewer jobs.

And don’t expect the economic growth to last forever. A recession will eventually come, putting even more pressure on Wilmette businesses.

However, business owners need all the flexibility they can to survive economic downturns, not to mention to hire new, unskilled workers and develop them. More mandates take away this flexibility.

What will these mandates require of businesses? The Cook County mandates come with 80-pages of new rules and regulations that businesses must comply with. That’s just another set of rules on top of all the burdens the state and the county already impose.

Take, for example, the sick leave ordinance. Businesses would have to offer it for even part-time teenage seasonal workers.

The new mandates just pile on top of the taxes, fees and mandates that are rising uncontrollably in Illinois. The state’s pension and budgetary crises will only make things worse for Wilmette businesses and their workers in years to come.

Are only private businesses subject to this mandate? What about government? Government bodies and unions are exempt from this mandate. Private businesses alone would bear the burden of this new law if Wilmette opts in. These exemptions in the ordinances beg the obvious question – “If these ordinances are good for small business, why not government institutions and unions as well?”

What does “opting out” mean? Opting out means that Wilmette Village Trustees trust small businesses to do the right thing and be good employers – as the Village Board’s business survey has already evidenced.

Wilmette residents have never voted on this combination of more onerous mandates as the question was never asked of them.

Cook County and Chicago finances are among the worst in the nation, with Chicago’s credit already rated junk by Moody’s Investors Service. And employees, residents and families are fleeing. Cook County had the highest population loss of any county in the nation between 2015 and 2016.

With such a failed record, Cook County has no business getting into Wilmette business.