A recent headline in The Bond Buyer announced that Florida’s state budget was “marking eight years of record spending.” That caught our attention given Illinois’ perpetual budget crises.

We guessed Florida could grow its budget because it was growing its tax base – attracting people and businesses – instead of running deficits like in Illinois.

So we decided to take a quick look at the state’s numbers, and here’s what we learned. It’s not an in-depth analysis, but it is revelatory.

No, Illinois is no Florida. But we’d be dumb not to look at their success.

In 2000, there were 3.6 million more Floridians than Illinoisans, according to the U.S. Census Bureau. Today, the difference has grown to over 8 million.

Florida has added 5 million people since 2000. In contrast, Illinois has added just 370,000 to its population over that same period. 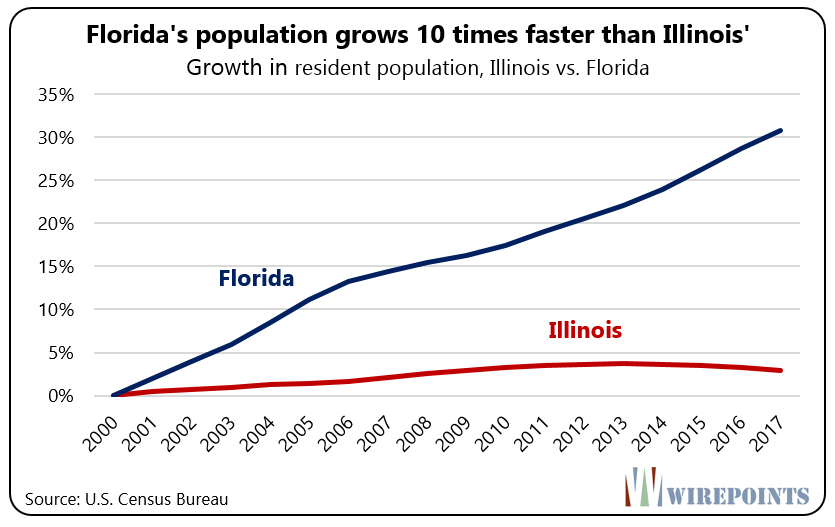 What’s worse, Illinois is on a downward trend. It has lost population for four years in a row, a sad record shared only with West Virginia.

If Illinois personal income had grown at the same pace as Florida’s over that time period, Illinoisans would have $160 billion more in income today. 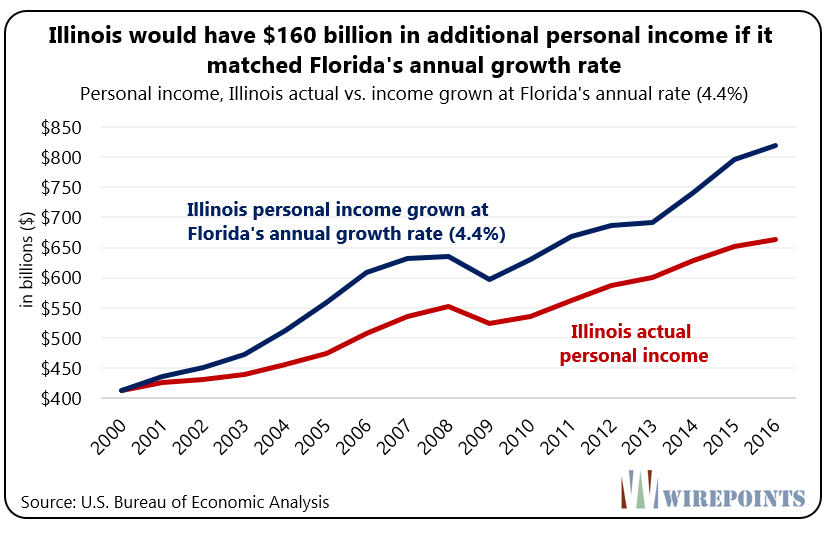 Jobs, jobs, jobs. Florida employment has grown by 1.5 million people since 2000, according to the U.S. Bureau of Labor Statistics.

In contrast, Illinois’ employment has grown by a paltry 21,000 over the same period. In other words, Illinois has created virtually no net new jobs since the turn of the century.

Bigger budgets. Unsurprisingly, a bigger population, more income and more jobs means a bigger tax base for the state. Florida’s general revenues, at $32.2 billion, have grown 53 percent, or nearly 4.4 percent a year since 2009. That means more budgeting flexibility for education, roads, health care and public safety – and a record budget eight years running, according to the governor.

But it doesn’t mean Florida has kept spending indiscriminately. According to the governor’s 2019 presentation, annual general revenue receipts as a percentage of personal income have dropped. In 2003, they were 3.8 percent of income. By 2019, they are projected to drop to just 3 percent.

We haven’t dug deep into the Florida budget, and there may be plenty of challenges to make to the numbers, but there’s no denying that Florida is growing its tax base while Illinois is shrinking.

The contrast is striking.

Illinois continues to grow its spending by borrowing, enacting massive tax hikes and growing its unpaid bills, even as its tax base shrinks.

Florida, in contrast, has grown its spending by growing its economy and its tax base.

Florida is just as doomed. The thing that is keeping it out of the mire (pun intended) is the Water Canel system operated by the Army Corps of Engineers. Once the Feds stop paying for that Florida turns back into a swamp.

Illinois should start by adopting Florida’s tax law on inheritance.