Blame whatever you want: pensions, corruption, property taxes or budget crises, but there’s no denying Illinoisans are fleeing the state.

New U.S. Census data shows that Illinois lost more population than any other state last year. The state is now the 6th-largest in the nation, dropping from 5th-largest last year.

The Census data revealed what many Illinoisans fear: the state is shrinking. And it’s become a chronic problem.

Here are the five key facts you need to know:

1. Illinois lost 33,703 people in 2017, more than any other state. Illinois was one of just eight states to lose population. 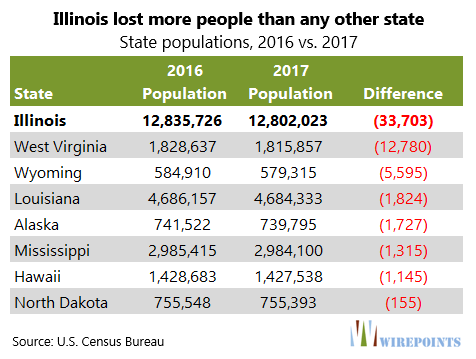 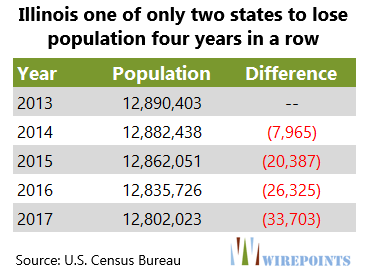 3. The Prairie State also gave up its position as the fifth-largest state to Pennsylvania. The Keystone State grew by 18,000 in 2017 and its population now surpasses that of Illinois. 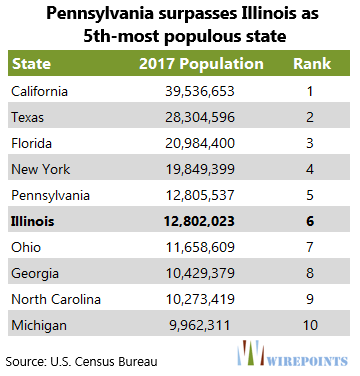 4. Bad weather isn’t to blame for Illinois’ ills. All of Illinois’ neighboring states gained in population. In fact, Indiana gained nearly as many people as Illinois lost. 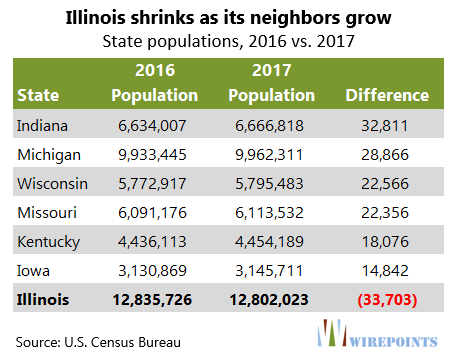 5. Some pundits will call the changes to Illinois’ population since 2010 a rounding error. But while Illinois has shrunk, its neighbors have grown. Indiana has gained the equivalent of the City of Rockford and Iowa has gained the City of Elgin since the start of the decade. 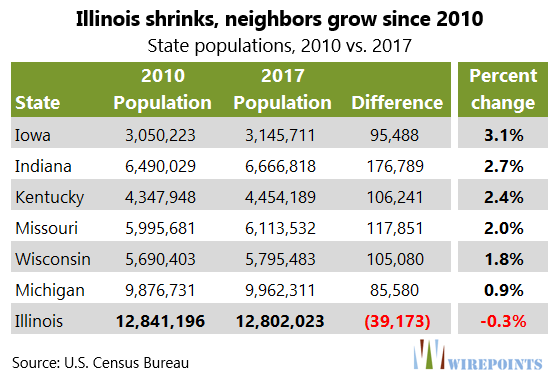 Illinois politicians can continue to ignore the massive mess they’ve created – from the nation’s worst pension crisis to the highest property taxes to the nation’s lowest credit rating.

But as long as they continue to fail, residents will continue to leave. And with them goes the tax base.

If this isn’t it, you have to wonder what the wake call is going to be.