The bad news on pensions keeps piling up for Illinois. Earlier, it was Moody’s Investors Services warning that pensions and debt may have a bigger impact on how they rate states going forward. That could push Moody’s rating of Illinois into junk, creating even more fiscal and economic chaos for Illinoisans.

Connecticut, Kentucky, New Jersey, Alaska and Massachusetts were the next highest-burdened states. In contrast, Nebraska had the lowest total state debt burden in the nation at just 1.8 percent of personal income.

The median across all states was just 6 percent.

Some of the variance in state debt burdens has to do with the fact that some states pay for local government costs. In all, at least 27 states, including Illinois, pay for all or part of local government and teacher pensions.

Debt burdens are also impacted by what discount rates the various pension plans use to calculate their unfunded liabilities. Government accounting rules negatively impact the poorest-funded states more than others. They appropriately require those states to use even more conservative assumptions.

That massive debt is one of reasons why Fitch has Illinois rated at BBB, two notches above junk, while Moody’s and S&P both rate Illinois even lower, just one notch away from junk. 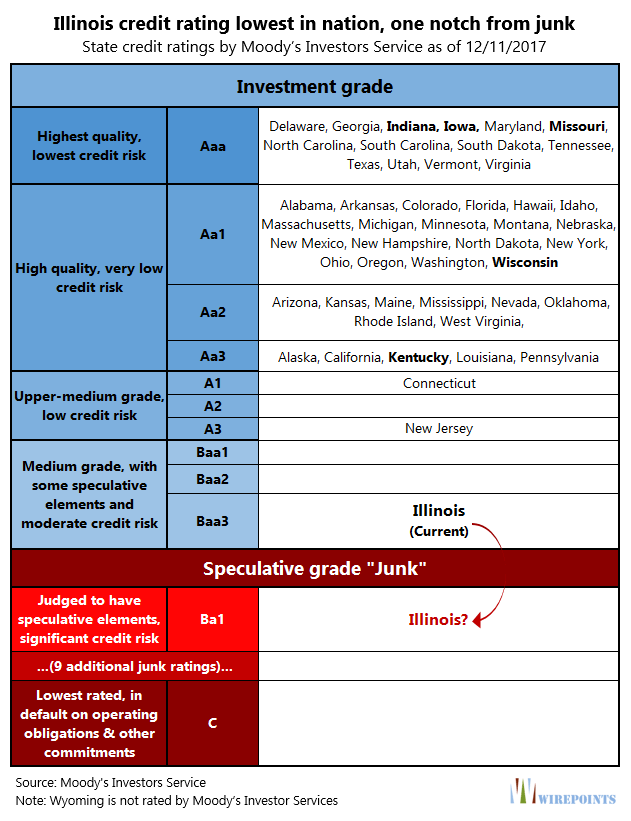 Iowa has the lowest total debt burden at just 2.2 percent of the state’s personal income. Indiana has 5.8 percent. Kentucky, currently embroiled in a pension crisis of its own, has a burden of 24 percent. 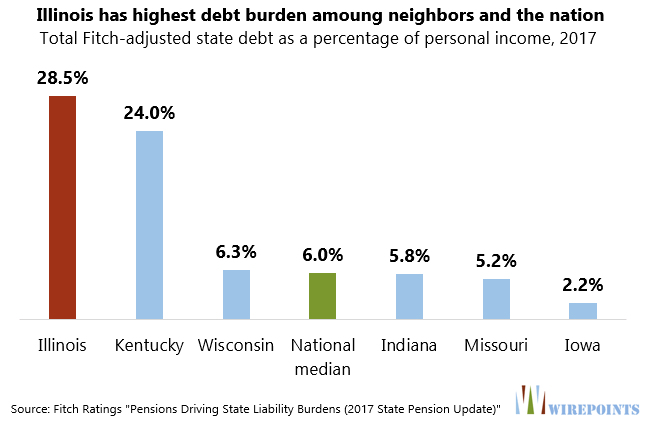 Expect this pension mess to create a true financial crisis in Illinois sometime in the future. The pressure Illinois has seen so far is nothing compared to what will happen when the markets and credit agencies finally shun Illinois.

Which is why politicians should act quickly to fix the pension mess. Not just to fix the state’s finances, but to make retirement security a reality for all government workers, to provide tax relief for all Illinoisans and to ensure Illinois’ most vulnerable continue to receive core government services.

Getting the state’s debt down means implementing 401(k)s for all new workers at all levels of state government, reforming the Constitution’s pension-protection clause, and negotiating a bankruptcy clause with the Federal government.

But don’t expect politicians to do much about pensions. As usual, they’re focused on their campaigns and trying to spin the story that they saved Illinois from a junk bond rating by passing a “budget” and a $5 billion dollar tax hike. Nevermind that the state’s already headed toward a $3 billion dollar budget deficit next year and that pensions continue to devour more than a quarter of the state’s budget.

Politicians can continue to ignore this state’s most pressing issue, but the rating agencies won’t. And once the junk ratings come, it will be too late to reverse course without an enormous amount of pain to taxpayers, state retirees, and the state’s most vulnerable.

September 29, 2020
Ted was on Univision warning Illinoisans about the negative impacts of tax hikes like the progressive income tax. He warned that giving billions more to the most corrupt politicians in the nation would only make things worse.
View Comments (1) | Add Comment