It was naive for anyone to think that Illinois’ record-sized budget and its $5 billion tax hike would solve the state’s chronic fiscal mess.

More money in the hands of Illinois politicians – with no reforms on how they spend it – was sure to end with more deficits. Seventeen continuous years of unbalanced budgets should have been proof enough.

So it’s no surprise that the “balanced” 2018 budget has turned out to be anything but balanced. The state is less than six months into the fiscal year and the budget is already expected to reach a $1.5 billion deficit.

Those numbers will only get worse in fiscal year 2019, which begins about six months from now. Without transforming how Springfield spends money, politicians may be on on track to overspend by $3 billion more in 2019. 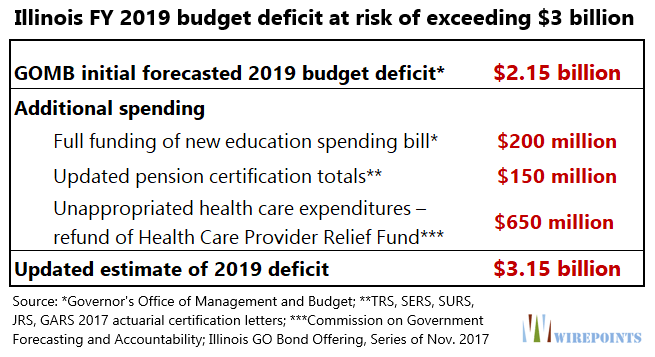 And that means Illinois politicians are back to what they’ve been good at for the last decade – building up the state’s unpaid bills backlog. The recent $6 billion bond issue may have brought the unpaid bill balance down to $9 billion, but the new deficits are just beginning to pile up again.

Unfortunately, there’s little chance in closing next year’s budget gap, given neither party will agree on how to balance the budget.

Politicians may not even agree to pass a budget at all considering how nasty things have gotten in Illinois. With campaign season starting up in earnest, Illinois lawmakers will be more focused than ever on scoring political points rather than improving Illinoisans’ wellbeing.

The problems with the 2019 budget starts with fiscal year 2018’s deficit, which is the year we’re currently in.

The Governor’s Office of Management of Budget (GOMB) found that the 2018 budget:

The above spending and revenue corrections flipped the 2018 budget from a reported $360 million dollar surplus to a $1.5 billion shortfall.

That’s bad news for the 2019 budget, which, by definition, starts unbalanced.

Putting aside the fundamental problems – of which there are many – with the new law, the promised spending isn’t fully accounted for in GOMB’s projections. The 5-year forecast only includes $200 million in new spending.

If lawmakers push for the full amount, the 2019 deficit will grow by another $200 million.

Pension costs. The 2019 budget pension payments will also increase. GOMB’s initial forecast assumed the state’s payments to the pension funds would increase by $421 million in 2019. That number was based on the initial certifications by the funds.

But the new funding certifications are out and, not surprisingly, they’re higher. The pensions funds have now asked for nearly $200 million from the state.

That’s not surprising considering the fact that the pension fund debts, whether due to actuarial changes or investment shortfalls, continue to rise uncontrollably despite record market returns.

Health care costs. Expectations for what health care might do to to next year’s budget is more murky.

First, the potential elimination of the ACA individual mandate as part of federal tax reform will create some amount of uncertainty. More residents could migrate to Medicaid. Compound that with an increase in the state’s funding responsibility for those enrolled during the Medicaid expansion and the state could end up with higher overall costs than already budgeted.

Second, GOMB’s 5-year forecast may also be impacted by the reimbursement from the general fund to several special funds. If and when those reimbursement costs are added to the 2019 budget, spending could rise by as much as $650 million.

The current budget deficit and next year’s projected is proof that that more money and a budget doesn’t mean financial stability.

Lawmakers’ $5 billion tax hike was supposed to fix things, but Illinois is still looking at sizeable budget deficits for the next 5 years.

It’s all part of the insanity brought about by lawmakers’ fiscal mismanagement.

Every year, Illinois politicians have papered over Illinois’ problems with higher taxes, more borrowing and accounting tricks. And every year the state’s unpaid bills and debts have grown.

Continuing the fiscal insanity next year will only lead to the next round of tax hikes.

The only real way out of this is through a massive correction to how politicians spend taxpayer money.

That’s right…$5 billion more and still not enough. Don’t forget higher ed is still begging for hundreds of millions more. Social services wants a bigger slice. The next AFSCME contract or any back pay will cost $$.

All this and nary a chance of reducing the highest property taxes in the nation. If you’re a middle/upper middle class W-2’er, look out. You’re the one that going to shoulder this burden.

February 19, 2020
If you’ve listened to Gov. J.B. Pritzker in the past few weeks, you’ve heard him play games with words. We called him out on it recently and now he’s doing it again. If the progressive tax fixes the budget deficit and delivers a tax cut, then there will be no money for property tax relief.
View Comments (14) | Add Comment