Governor-elect J.B. Pritzker has included former Gov. Jim Edgar in his transition team. It’s not hard to figure out why. Edgar is a highly-regarded figure in Illinois politics and his involvement will add bipartisan legitimacy to Pritzker’s financial plans.

That’s unfortunate considering Edgar’s reputation and legitimacy isn’t deserved when it comes to the biggest problem Pritzker has inherited: pensions.

Many Illinoisans don’t know Edgar’s full role in unleashing the retirement crisis in Illinois. Edgar’s pension mistakes are not confined to the more famous “Edgar Ramp.” The other bipartisan pension compromises he championed are also responsible for turning the state’s pension problem into a full-blown nightmare.

Edgar’s signature pension “reform” of 1994 has left tens of thousands of state workers wondering when their pensions will be slashed. His kick-the-can plan has the state’s credit teetering on the border of an embarrassing junk rating. And the full impact of his pension scheme has finally come home to roost – more than a quarter of the state’s budget goes toward pensions, taking funding from everything else that matters.

Of course the whole pension crisis shouldn’t be pinned on Edgar. He’s had plenty of accomplices who made things worse. But it was his “compromise” policies made in partnership with House Speaker Mike Madigan that set the stage for Illinois’ pension collapse.

Since Edgar’s term, Illinois governors have shunned reforms needed to fix the state, choosing whatever gimmicks they could get their hands on. Blagojevich chose $10 billion in Pension Obligation Bonds (POBs). Quinn copied Blago with more than $7 billion in POBs and added a $32 billion, four-year “temporary” tax hike on top of that.

Both followed the example Edgar set: Don’t reform pensions but instead, push the crisis along to future governors. Pritzker has already indicated he may do the same thing, saying he is “seriously considering” more POBs and a faulty “reamortization” plan.

Here’s what Illinoisans should know about Edgar’s handling of pensions:

1. The Edgar Ramp kicked the can far, far into the future.

Edgar originally touted his reform plan as the solution to the state’s $17 billion pension problem: “We had a time bomb in our retirement system that was going to go off in the first part of the 21st century,” Edgar told The State Journal Register in 1994. “This legislation defuses that time bomb.”

It accomplished the opposite.

Edgar’s plan did nothing to structurally reform pensions. There were no benefit changes or reductions in perks – nothing that actually slowed down pension benefit growth or cut how much Illinois owed.

Instead, the compromise deal created the infamous “ramp” that pushed paying off the state’s pension obligations through 2045.

The payment ramp was heavily backloaded. The 50-year repayment schedule kept the state’s pension payments artificially low in the first 15 years, then rapidly ramped up the payments over the next 35 years.

The graphic below speaks for itself. 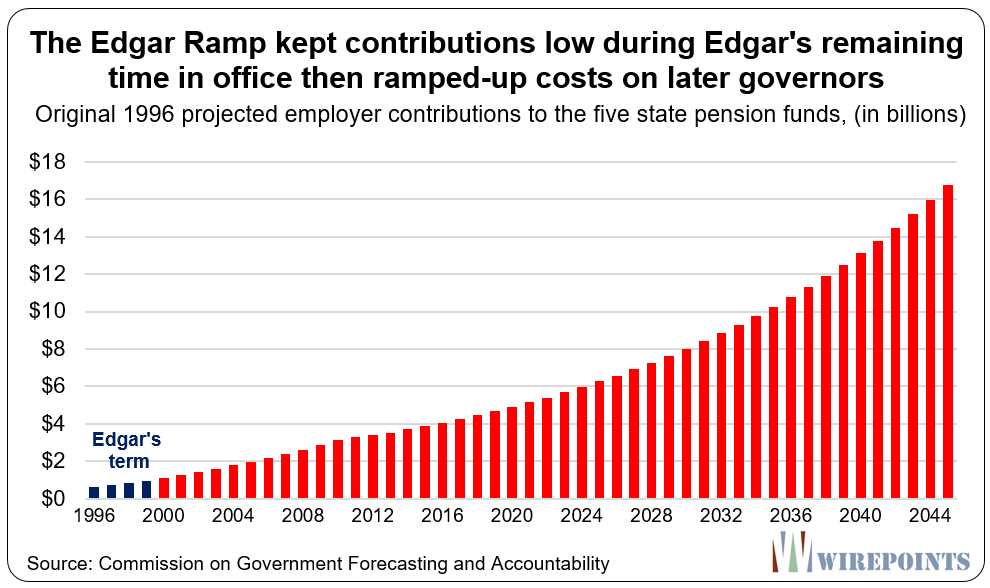 The ramp meant Edgar and his successor would have easy payments to make. Their budgets and spending plans wouldn’t be disrupted.

Edgar hoped that the state economy would grow enough to make the required future payments easier for following generations. That, of course, didn’t happen.

Governor Edgar didn’t just fail to reform pension benefits during his term, he actively increased them.

Edgar even bragged about it. He said he “…approved the most significant increase in pension benefits for state workers in a quarter century” and that, “A concerted effort was made to improve state employee benefits and make a career in government service more attractive.”

As a result, the total pension benefits promised to government workers actually doubled during Edgar’s term. 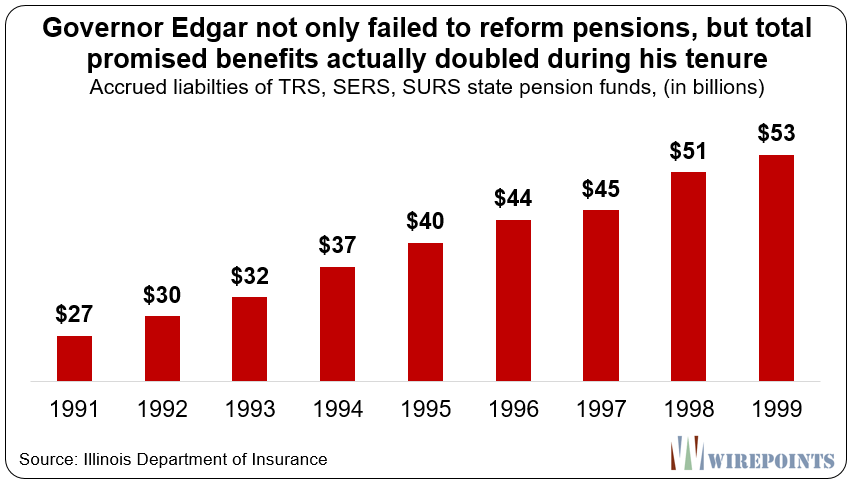 Total benefits have continued to grow since then at a rate ordinary Illinoisans can’t afford.

Fortunately for Edgar, the dot-com boom hid much of the impact of his benefit increases. In fact, the 90s hid a lot of the fundamental problems with Illinois pensions.

Market returns were far higher than in previous decades and Illinois’ pension funds took advantage of that. 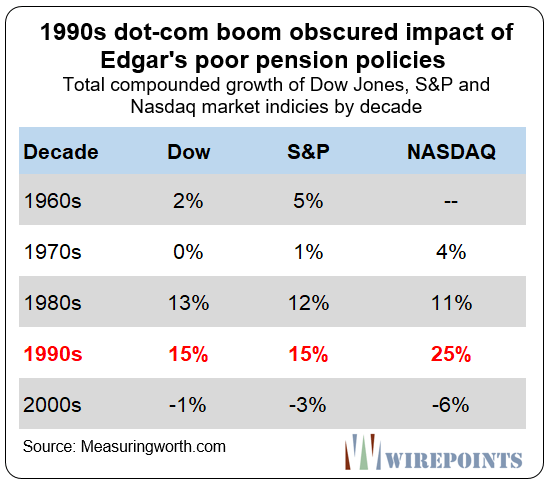 The funds’ investments experienced an average annual growth of 12 percent during Edgar’s tenure.

Edgar was lucky to preside over such a boom period – it made the pension crisis look far less severe than it actually was. The funds would have been far less healthy if stock market returns had been more in line with previous decades.

In fact, if pension assets under Edgar had grown at 7.4 percent annually – the weighted assumed rate of return in 2016 – the pension funds would have been just 54 percent funded in 1999, not 73 percent as they were officially. 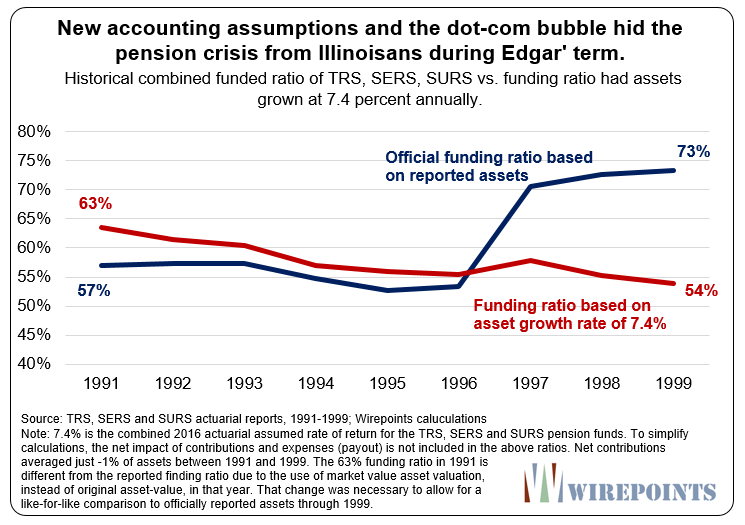 Edgar and Illinois politicians should have used the good times of the 90’s to get ahead of the crisis and enact real benefit reforms. Instead, they did the opposite. They increased benefits and created the Edgar ramp.

Edgar also benefited from an accounting change that made Illinois pensions look much healthier.

Before 1997, Illinois funds’ higher-than-usual investment earnings – results from the 90s boom – weren’t reflected by the funds’ balance sheets. Assets were reported “at cost” – not at full market value.

In 1997, the accounting rules changed to reflect market value, which boosted the funds’ reported assets by over $8 billion. That, in turn, boosted Illinois pensions’ funded ratio by over 17 percent from one moment to the next, to 71 percent funded in 1997 from 53 percent funded in 1996.

So, while the pension systems ended up looking better under Edgar, there is nothing he actually did to make that happen.

In a normal world where results matter, former Illinois Gov. Jim Edgar would be snubbed and rebuked for the terrible financial course he set the state on.

But we’re not in a normal world. We’re in Illinois. And in Illinois, Edgar is still beloved. Enough so that Pritzker knows he can use Edgar on his transition team to create an illusion of expertise and nonpartisanship.

That illusion will be used to take pensions, and Illinois finances as a whole, in exactly the wrong direction. Pritzker is already considering plans to reamortize pensions and then issue POBs to pay for the reamortization.

It’s another potential kick-the-can plan following in the footsteps of Quinn, Blagojevich and Edgar that. And it’s yet another plan that Illinoisans can’t afford.

I am not a resident of your illustrious region, but a very good friend of mine lives in Illinois and I watch the situation unfold from afar. I find it an utterly fascinating case study that has implications that go well beyond Illinois, which is only coincidentally one of the first regions to keel over due to a crisis that will soon engulf the entire Western world (another case worth studying in this context is Greece, which is already a few steps ahead of Illinois). The main lesson so far is that it is evidently impossible for the political class… Read more »

“I find it an utterly fascinating case study that has implications that go well beyond Illinois….” Yes! That’s part of why Wirepoints is here. The lessons and legal precedents set here will be enormously important, first to NJ, KY, CN, and following soon, CA and others.

0
Bob Out of Here
Reply to  Mark Glennon

That (plus friends and family still in IL) is the reason I watch this site like a hawk from SW Ohio. It’s not as if it’s only happening in Illinois, it’s just happening earlier. I warned one friend in Chicago not to move to KY, because it makes IL look like a state with financial genius’s at the helm of the ship of state.

You are correct about the leader who is indifferent to re-election but in a system that remains fundamentally democratic that leader would need a similarly inclined cohort of legislators and judges. This is sufficiently remote that we can call it “impossible” and that makes it reasonable to plan on a worst case outcome. The reasonable folks are looking for a combination of investments and geography that will protect them. Searching for that combination seems equally futile. Reform will come after remorse, recrimination and regret.

All of the fake solutions to the Illinois pension crisis are like the movie “A Bridge Too Far.” After D-Day, the Allies put together a bold plan to end the war by Christmas. What happened is everything that could go wrong did go wrong. Paratroop drops are iffy propositions which is why we don’t do those anymore. After the iffy Edgar ramp, the state of Calif. had its own version: SB400. Gray Davis now says nobody thought of the possibility of two stock market crashes back in 1998 during the dot-com boom. I guess he had faith in great companies… Read more »

And check out the lyrics to this, Burning Bridges. “I guess I should have listened….” I have been meaning to do an article on this. Already too late, of course. https://www.youtube.com/watch?v=1sCo5GaDq7k&start_radio=1&list=RD1sCo5GaDq7k

Edgar was far more intersected in spending time on rolling around on the mat with Denny Hastert than he was with wrestling with the impending pension crisis.

Edgar’s 1991 AFSCME contract introduced a pension pick-up. It also included an early retirement option in which employees could purchase up to five years of service credit at half the normal cost. All costs and savings considered, the state pegged the net cost from that contract to be $250 million over three years. The problem is that embedded in that cost was “savings” from the early retirement option. In other words, Edgar was the beneficiary of savings that we’re still paying for today, just like the Edgar Ramp.

He’d be a Democrat today. He is a member of what John Kass calls, The Combine.