Surely, the nation’s longest-ever stock market rally has helped turnaround Illinois’ pension mess, right? After all, booming markets have been coupled with massive increases in taxpayer contributions. If Illinois pension funds can’t get healthier in this environment, then when?

There’s little to cheer about in Illinois after the stock market’s decade-long rally just became the longest bull market run in U.S. history. Illinois’ unfunded liabilities have worsened by more than $50 billion during the same period.

And despite higher pension contributions that now consume a quarter of the state budget, funding ratios for the five state-run funds have failed to improve. In 2009, the year the stock market rally started, Illinois pension funds were 39 percent funded. Today, funding ratios sit at just 40 percent. 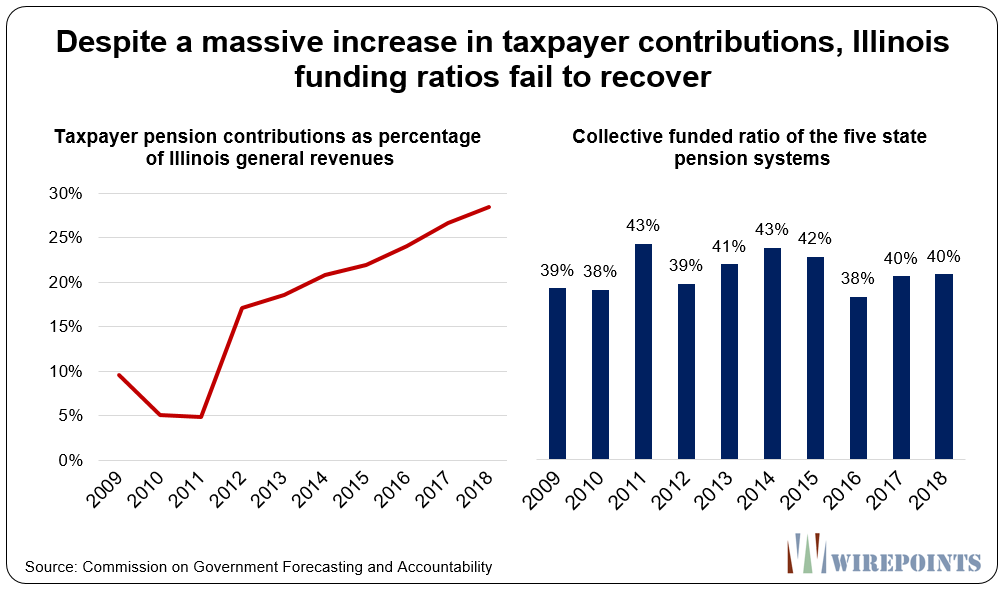 The warning this trend provides is stark: if the state’s pension debts continue to worsen during a period of remarkable market returns, imagine how the funds will suffer when the next recession inevitably hits.

Not only will state workers’ retirement security be put at greater risk, but taxpayers will be forced to pour billions of extra dollars into the pension funds when they can least afford it. And those most dependent on government programs will only experience further pain when the state cuts services to shore up pensions.

The growth in Illinois’ total promised benefits – its accrued liabilities – has made it impossible for the state to escape its pension crisis.

Stellar investment returns and growing taxpayer contributions aren’t enough to fix things so long as politicians refuse to do anything about the growth in promises.

Total pension benefits owed to state workers grew 8.8 percent a year percent between 1987 and 2016, swamping the state’s economy and taxpayers’ ability to pay for them.

In contrast, the state’s personal income, a proxy for GDP, grew at 4.3 percent a year. It’s no wonder taxpayer contributions haven’t been able to keep up with ever-growing benefits. 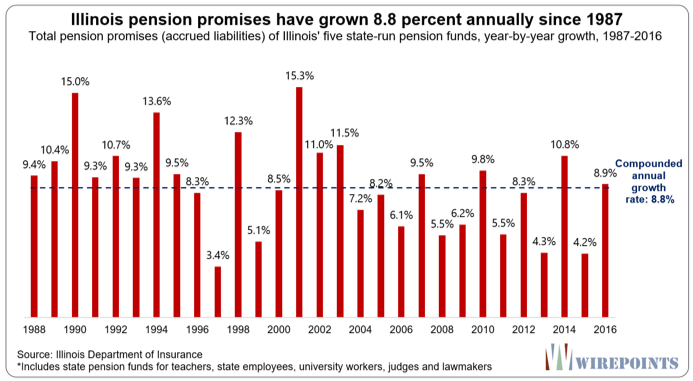 Bad news for everyone

What’s important to note is that the reported $130 billion in debt is the rosy scenario for Illinois.

Add to that all pension shortfalls in municipalities, plus the state’s $57 billion in unfunded health care obligations, and taxpayers’ burden becomes unbearable.

That means Illinois’ pension crisis is only going to get worse. And that’s bad news for everyone.

Just make sure upon your own retirements that you avoid or leave these high pension deficit states like the plague.The property taxes will be out of sight,along with every other possible tax.Marijuana will be legalized but you’ll still have to buy from underground dealers,because the taxes on it will be astronomical!

Well if it was too expensive to make cash contribs of NC + interest on the Unfunded liability (contribs were $48B less than the minimum that should’ve been made over the past 20 yrs bc apparently not affordable), then NOW it’s become 100% impossible to contribute NC + int on UAL.