The failure to protect retirement home residents from COVID-19 is one the biggest failures of Gov. J.B. Pritzker administration’s handling of the pandemic. Questions have been raised repeatedly by Wirepoints and others on whether more could have been done. More than 55 percent of the state’s nearly 7,900 COVID-19 deaths have been tied to nursing homes.

Now, reporting by the Chicago Reader and the Chicago Tribune raise other questions as to how and why the Illinois Department of Health (IDPH) handled retirement homes the way it did. At issue are several executive orders issued by Pritzker early on – and renewed as the pandemic worsened – that suspended several core tasks of IDPH. The result of those orders left hundreds of complaints of neglect and abuse uninvestigated for over three months. 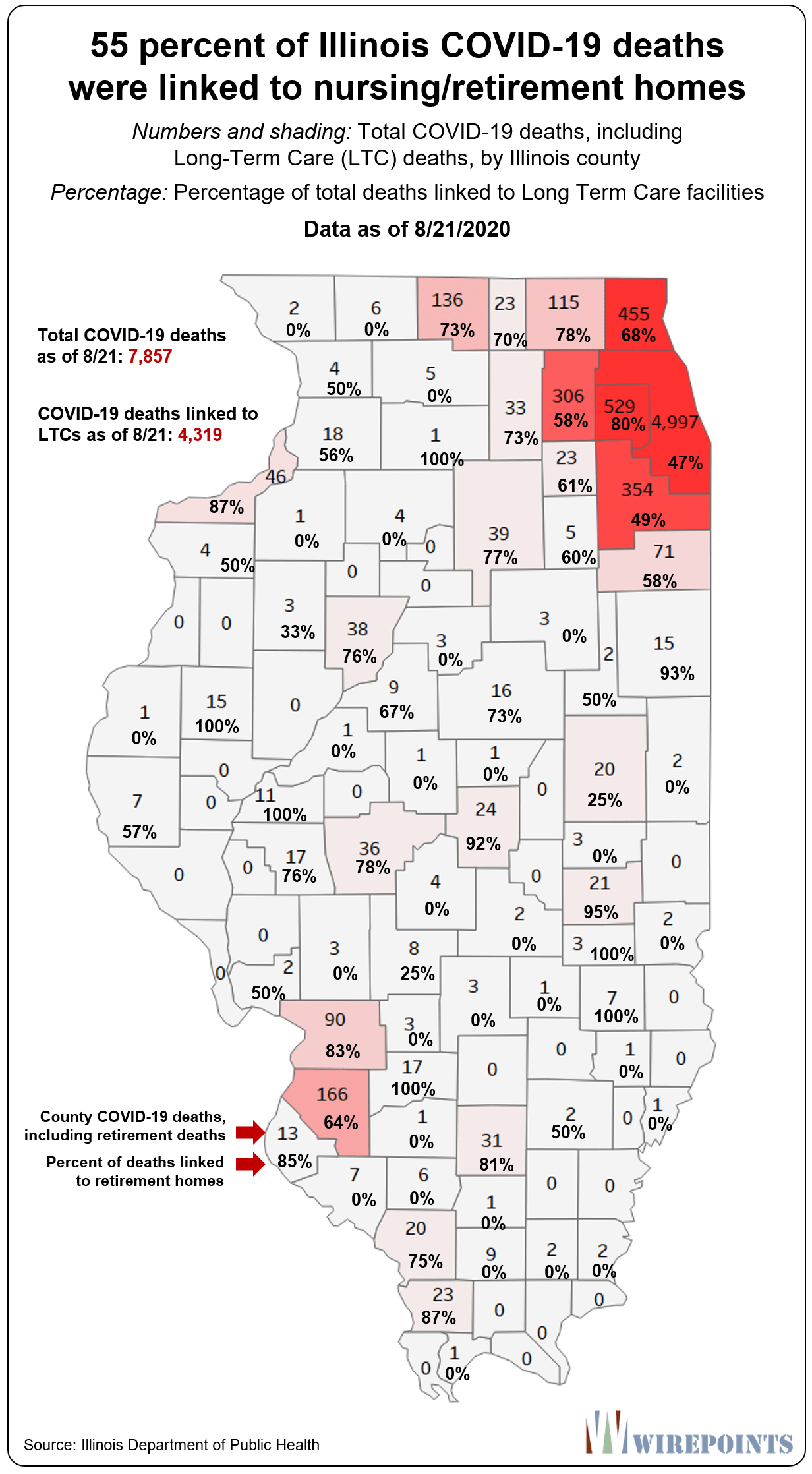 Retirement homes have been at the heart of Illinois’s COVID-19 outbreak from the start. In many counties across the state, the majority of deaths reported have come from Long-Term Care facilities. Total COVID-19 deaths by county, and the percentage of those deaths coming from retirement homes are shown in the graphic.

Last month, the Chicago Reader wrote a detailed article on the administration’s handling of COVID-19. The Reader questioned Pritzker’s use of executive orders to suspend the IDPH’s enforcement of health regulations for the sector. It also criticized Pritzker’s grant of broad immunity to facility operators for potential negligence in the middle of the pandemic.

The article appeared shortly after two IDPH directors responsible for regulating retirement homes were replaced. But the apparent reason why the two directors were let go remained unclear – until now. While there is still no official response from the administration, the Chicago Tribune has uncovered a pretty solid reason for the firing.

The paper wrote last week that IDPH failed residents by neglecting their core task of investigating abuse “for nearly 3½ months during the coronavirus pandemic.”

“A health department spokeswoman said top administrators discovered July 8 that agency personnel had not investigated any of the abuse or neglect complaints it had received from mid-March until June 22 as required by state law. The most serious complaints require an investigation to begin within 24 hours, next-worst within seven days and least serious within 30 days.”

So, not only did the state fail to effectively protect retirement home residents from COVID, but in its rush to manage the situation it failed to protect them from neglect and abuse as well.

It’s no wonder then, that the IDPH has resorted to damage control, announcing that an outside firm will conduct a “a top-to-bottom review” of agency procedures and that a former federal prosecutor will examine several of the departments’ investigations.” Notably both will be focused on “recommending best practices” and “improving existing procedures.” Nothing has been said about holding anyone responsible for what happened.

It’s baffling that Pritzker would use executive orders to relax oversight of nursing homes during the worst part of the pandemic. It runs completely contrary to his other executive orders that led to one of the strictest lockdowns in the country.

Keep an eye on this as the story develops.

Read more about the coronavirus and its impact on Illinois:

Just heard a terrible story from a neighbor with a 74 year old brother in a Medicaid nursing home. Basically locked in his room like a prisoner. No visitors. No physical exercise. Can’t leave the room for five weeks. Can’t even go to the dining area for food– all meals brought in . But a great black market developing for cigarettes, because the rules allow a patient to go outside for cig breaks four times a day. So patients who dont even smoke are begging for cigs so they can get out of their rooms. Cigs are being sold for… Read more »

Rest assured that Pritzker and his ilk will never wind up in assisted [as in assisting you into the mortuary] living, formerly called nursing homes. Therefore, where your relatives and friends go is of no concern or all theoretical to him.

Why is it the Politicians in this State are more worried about statues and paintings then the corruption going on. Pritzker has shut this State down and put us further in debt. How many small business will be lost because of his incompetence and making up his own rules. Seems he likes to have the power to tell everyone else what to do, but for him and his family they do not apply. Now to add to that he wants more taxation so people like Madigan can have more No Show Jobs, and he can get away with changing tax… Read more »

IL GOP needs to call for special investigation to ensure something like this never occurs again. But then I remember they are the do nothing party.

Every time I see a pic of an Illinois public official/leader I ask myself, “Does Illinois have any physically attractive residents?”

1
Freddy
Reply to  Mick the Tick

According to Elaine on Seinfeld only 25% are considered good looking. Jerry says more like 4-6%. Jerry says. Have you been down at the motor vehicle center? It looks like a leper colony.

Yep, she would be a star at Brookfield Zoo.

He and the NY gov are of the same cloth.