One of the keys to fully reopening Illinois’ economy is knowing just how lethal COVID-19 truly is and yet, more than three months into the crisis, Illinois health officials have yet to provide any real guidance on what Illinois’ actual fatality rate might be.

More precise fatality numbers in Illinois would inform all kinds of decisions from what parts of the population need the most medical attention to how quickly the state can open up its economy. Instead, Illinoisans and its policy makers are left only with official COVID-19 numbers that grossly overstate the state’s actual death rate. That’s largely because Gov. J.B. Pritzker has stonewalled antibody testing in Illinois since late April.

Silence from the governor was understandable earlier on since preliminary predictions nationally put the COVID-19 death rate as high as 3.4 percent and it was impossible to reasonably estimate how far the infection had spread. But now antibody testing results from around the country, including from the CDC, are showing the actual lethality of the virus is far lower than originally feared.

Antibody test results are supplementing other tests and showing the true number of positive COVID-19 cases – current and recovered – may be anywhere from 10 to 50 times higher than the number of officially reported cases, dramatically reducing the virus’ actual fatality rate to a range of 0.1 to 0.5 percent. 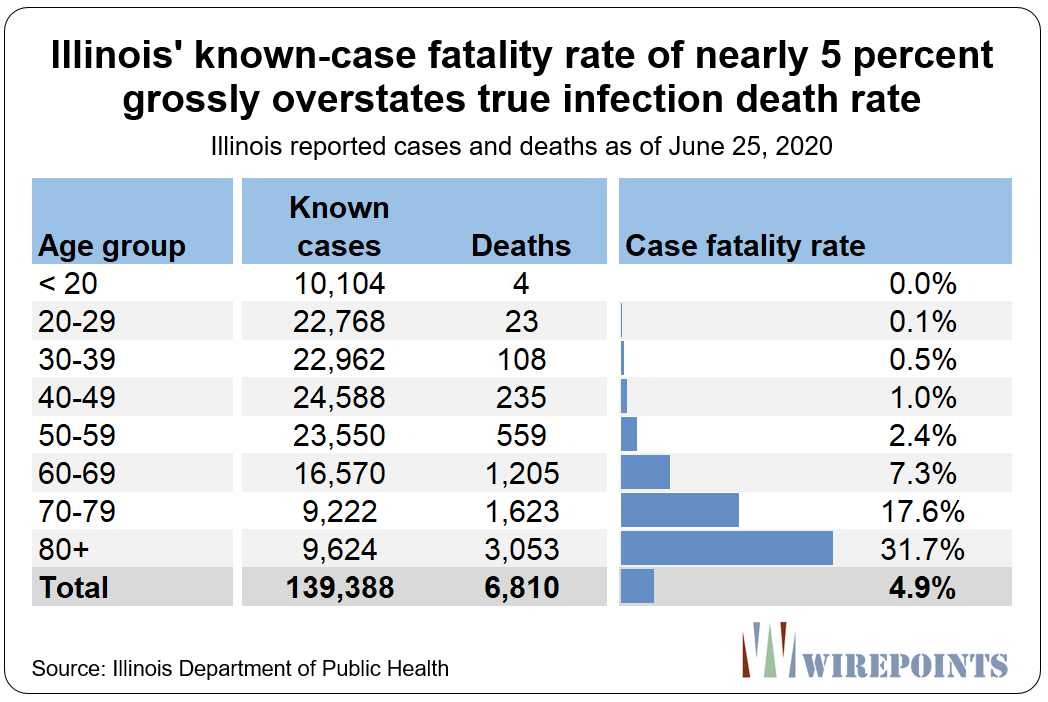 The exaggeration of Illinois’ death rate – on average about 20 times higher than what antibody testing demonstrates – is what makes that testing all the more urgent in Illinois.

Antibody tests are being used in many parts of the country to determine what the true infection rate for COVID-19 is. Those tests identify people who’ve already been infected by the virus, in particular those who were asymptomatic or who only had mild symptoms and were never originally tested.

The CDC’s most recent results provide a better guidance on what the true death rate may be. Based on blood samples taken around the country, Robert Redfield, the CDC Director, said this last week: “CDC has completed a series and will continue to do fairly extensive surveillance throughout the nation using antibody testing. And our best estimate right now is that for every case that was recorded, there actually are ten other infections.”

The CDC findings suggest, then, that the true number of U.S. cases total 24 million, not the 2.4 million reported officially. That would drop the virus fatality rate to 0.5 percent from the known-case death rate of 4.9 percent.

Other city and state specific serological studies predict the number of actual positive cases to be even higher. A study in Miami-Dade County estimates actual COVID-19 cases to be 16 times higher than the county’s officially reported case number. Researchers from Stanford in Santa Clara, California found results that estimate 50 times as many cases than Santa Clara officially had. Other studies from Sweden put the estimates at even higher multiples. 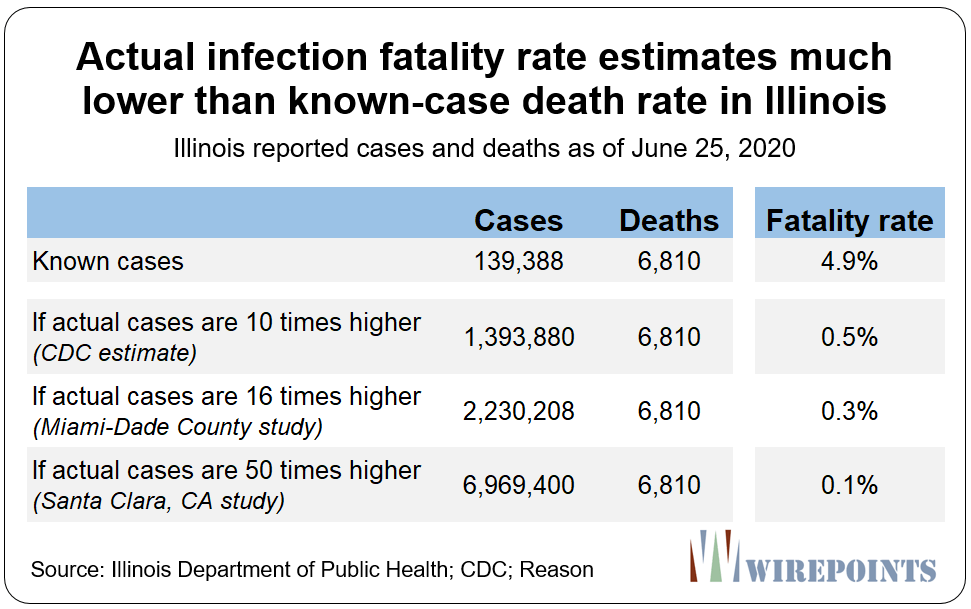 Antibody testing data is particularly important to the elderly population, who have suffered the most from the virus, by far. The official death rate is frightening, since it shows nearly one in six known victims aged 60 and older have died. The true numbers for Illinois won’t be known until significant antibody studies are done here.

Antibody testing is controversial when it comes to reliance by individuals. That’s because some tests on the market are error-prone, and it is not clear how much immunity one has if antibodies are present. But the FDA has confirmed that at least two tests on the market are 99% accurate, and researchers can adjust for error rates. Testing in Illinois, therefore, should be ongoing, just as it is in other parts of the country.

While the lower fatality rate from antibody testing is good news, it also means the disease has spread further than anticipated. In the long-term, that may increase the potential for herd immunity to reduce the spread of COVID-19. But in the near term, the fact that so many people are asymptomatic means it will remain harder to protect vulnerable populations.

The bottom line is, while COVID-19 is still more dangerous than the flu, it’s far less dangerous on average than initially believed. But averages can be deceiving, leaving certain groups in great danger. That’s why we need antibody tests. COVID-19 remains an extremely serious disease and its course continues to confound experts.

Illinois should be a leader in antibody testing nationwide, especially since the state has had the fifth-most cases in the country and the fourth-most deaths Unfortunately, Gov. Pritzker has said nothing recently about reinstating testing. In the name of science and data, that’s something on which he should immediately reverse his stance.

Factors to consider in a more rigorous analysis of COVID-19 testing, positivity rates for current and/or past infection/exposure, and death rates include: 1. Testing rates per population, filtered by stipulated conditions allowing testing, costs per tested subject (which affects participation per population), and whether tests are indicative of how exactly the test subject is considered “positive “: are the tests indicative of current viral load or are the tests indicative of prior exposure leading to current antibody prevalence? 2. Hospitalization admission protocols including cost factors: data indicating predictable percentages of population’s rational behavior related to cost factors such as un-… Read more »

Are you really suggesting that, “His Excellency, J Beluga Pritzker, Governor of all of Illinois”, is full of SH**?

I truly find this hard to believe…

How can you not be without having toilets. I call it being severely bound up.

If you want 100% assurance that this virus won’t spread, get everyone crammed by each other all day at black lives matter protests. That’s right, this virus is the first “virtue virus” ever. Church, school or work? Are you crazy? Riot, loot and protest in close proximity in large groups not over children of color being shot, but of an out of control cop killing a person of color where no evidence of racism driving the killing exists, and this thinking virus chooses to not infect said rioters, looters and protesters. Is it any wonder the aliens try and avoid… Read more »

I just watched that new 60 Minutes segment from Sunday on antibody testing. What a hack job. It’s correct about the failure by the FDA in allowing lots of junk tests to come to market in March, which people were relying on for individual use. But it goes on to say that all the junk sold then is still being used to set policy. But the research used to set policy adjusts for error rates, which is pretty easily done. We explained that in our late April article linked here: https://wirepoints.org/pritzker-now-stonewalling-critical-antibody-testing-wirepoints/ with some citations linked. And it leaves the impression… Read more »

Do you feel dumber after watching a national news show? That’s why I stopped watching them. It’s not news.

The worthless governor has to keep us in prison. He intends to milk this for everything he can.

This is a different Susan than me.

60 Minutes, which has swung way left in it’s reporting, had a story last night that the antibody test kits are mostly junk from China. If their story is correct, which again could be suspect, the antibody test kits have such a huge false positive results, how can it be trusted? The FDA did a self assess approval for the kits in the beginning to fast track them and now are pulling back and not approving a bunch of them. Not that I want to give JB any credit for anything, besides wear a mask, they may be right dropping… Read more »

60 minutes hasn’t swung left, they are the left. I used to watch that show as a young adult. I stopped watching it decades ago

What do you think will happen by fast tracking a so called vaccine. I for one will not be in line to get one. I will stick to my Vitamin D-Zinc and vitamin C

The FDA confirmed the research on Roche and Abbott tests showing they are 99% accurate. More importantly, for research purposes–which is what this article is about–the error rates are known and are built into the analyses of the data. As the article says, the only real controversy pertains to individuals relying on those tests of lower quality.

Of course you all know that many of the fatalities were labeled as COVID deaths since the deceased had COVID antibodies even if they died of a heart attack, cancer or any other disease since the hospitals got more money labeling it this way. Why do you think we are not allowed in hospitals? It is not because of the virus. It is because the hospitals don’t want us to know the truth.

I believe you are saying that the Governor is primarily interested in showing a high death rate. Including antibody test results harms his speaking points. He and his team can’t handle the real data. As you stated: “Gov. Pritzker has refused to pursue antibody testing, so there are no good infection fatality rate estimates for Illinois. However, using Illinois’ data and antibody testing results from other parts of the county, the state’s infection fatality rate could range from 0.1 percent to 0.5 percent.”

This seems to bring into question again Pritzker’s conflict of interest due to his investments with virus testing, which his companies make $50 / test. If antibody testing where to show major areas of Illinois to be approaching herd immunity, you wouldn’t need a lot of virus testing. What else explains Pritzker’s irrational behavior on this?