“I think what really turned the corner in Illinois was the use of masking everywhere,” said Governor JB Pritzker on Wednesday.

That doesn’t square with the state’s own data.

Pritzker’s order on face masks became effective on May 1. He issued the order on April 23.

But the state’s numbers clearly show that the virus peaked in Illinois between April 15 and April 18, which we detailed here – before his face mask rule.

Let me be clear. I am not saying masks are not effective or that they should not be worn. While I am well aware of the controversy about their effectiveness, I wear one and I think the balance of the evidence says it’s best to do so. I also follow most social distancing rules and think everybody should who is in an at-risk group or in contact with those who are.

The point, instead, is that this is yet another instance of bad “science and data,” which routinely go unquestioned. Instead of working towards a true understanding of what’s behind the course of the virus we get politicized claptrap from politicians.

The trend in Illinois has been consistently good since mid-April, as we wrote earlier, which Pritzker and his administration have been regularly boasting about. 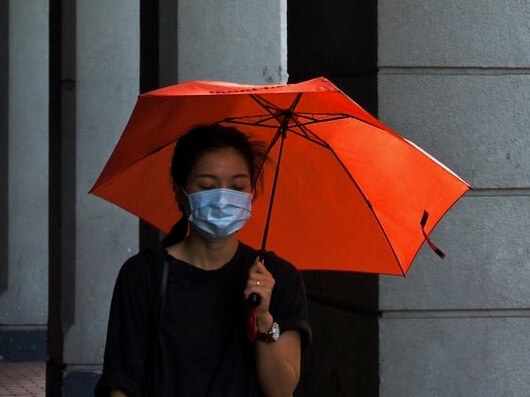 Why the good trend?

I for one don’t know because the data and experts vary so much here and across the country. However, what’s clear is that nothing illuminating is coming out of the Pritzker Administration and many elements of his reopening plan are make no sense on their face.

Current trends in many other states are very troubling, particularly Arizona, Florida and Texas. The most balanced assessment of this new uptick is in a Wednesday Wall Street Journal article, we think.

The problem, again, is figuring out what’s behind those trends, and it’s not as simple as crediting masks or lockdown orders. “Putting it all together, it’s very difficult to tease out specifically why we see an increase,” said Pinar Keskinocak, an infectious-disease modeler and director of the Center for Health and Humanitarian Systems at Georgia Institute of Technology quoted in the Journal. “But in general we can expect more interaction. We’re going to see more cases.”

Maybe Illinois will see a resurgence. Maybe Wisconsin will as well, which has fared extremely well despite having no lockdown order since May 13.

If that happens and Illinois needs to adjust course, it will be worth remembering the full history. It shows that, despite recent trends, Illinois is among the poorest performers based on total numbers of deaths and cases per capita. Illinois lost 53 people per 100,000 of population, which is 2.6 times more than Arizona, 3.5 times more than Florida and 6.6 times more than Texas. Full rankings are here.

“Pritzker’s order on face masks became effective on May 1. He issued the order on April 23.”

If masks are so important to wear, why wait 8 days to put it into effect…?

You know, to save lives… Right…?

The vast majority increases in positive tests are those under 30. This is totally caused by the BLM terrorist organization protests as they rioted, screamed at police, burned and looted. Now these people will infect elderly and those with pre existing conditions and we will hear more fantasy about the increases caused by racial disparity in the black communities. Thanks BLM and their bosses in the DNC for causing this pandemic to get worse.

It’s not racist to say this. Thank god no one in my household, or social circle, went to these coronavirus spreading rallies.

The media tries to blame this on Memorial day parties.

minus 25% on the death count which includes hospice positives and unrelated covid positive deaths as covid deaths!!!!!!!

Mark, I’m sure a manly man like you was not wearing a mask prior to Pritzker giving you an “order” to do so. You knew nothing about social distancing, hand washing, or self quarantine either. People on this area were being careful. That is why the virus spiked and the numbers came down. I’m not a big fan of Pritzker either, and realize he was taking a bow here for something his policies had little to do with, but you’re proving to be a one trick pony here. The point is, the numbers are manageable, the hospitals are not jammed… Read more »

You either haven’t been reading the news or this site, or you have a bad memory.If you’ve been reading us here you’d know I regard Pritzker as a serial liar and that nothing I do would be based on his “science and data.” Most of America started social distancing and the economy slowed drastically before Pritzker’s order, as did I. Nor did most people wear masks at first because, among other reasons, people like Dr. Faucci said they don’t work (it’s easy to find the video on that). The numbers are manageable and everything is under control, you say thanks… Read more »

It’s Trump who is stonewalling on the testing because he doesn’t want the U.S. Numbers to up and you sound like you have the same thinking as trump. If you remember JB closed all the bars and restaurants in mid March which helped quite a bit, but according to you that doesn’t count and he delayed the opening even though he was being pressured. As for more deaths maybe it trump gave out the ventilators when the states needed them that would have helped, if you do a fact check it tells his trump had a stick pile of ventilators and would not release them, Hench people died

Go seek professional help for your TDS. JB has been a disaster. We have one of the highest per capita case and death rates in the country. That’s all on JB. Trump built Lori and JB a hospital in 6 days. It took a couple of patients and it’s quietly been shuttered. JB closed everything and our economy is in shambles, and we’ll have our second wave too soon enough that will dwarf the first wave.

Ah, the “but Trump.” Never fails. If you want to use him as your standard for whether Pritker has done his part correctly, I say you need a higher standard. Re the initial order in March, I said here I generally supported prevailing lockdown rules at the time, and I would add that most people started voluntarily distancing before governors mad it mandatory. The issue now is whether Pritzker’s order is properly targeting the areas and demographics it should be, and whether certain aspects make any sense at all. As for ventilators, nobody died anywhere in the nation for lack… Read more »

Typical cognitive dissonance here. You can’t accept the fact that the party you support has dropped the ball, so you just take the easy way out and go along with the narrative. Same with those useless masks. Tell me, Nancy, have you been breathing your own co2 since March? You know that’s really bad for you. But hey, JB says they work, so you can trust him, right?

Do you really believe he had venitalors stockpiled away. If so, I do have property in Florida I need to get rid of. Swamp, alligators by the hundreds, but it is not like it looks. 😳

“The point is, the numbers are manageable, the hospitals are not jammed with cases, and while it took far too long, and isn’t enough in my opinion, there is testing.” As soon as you say this, I disregard everything else you say. There is testing EVERYWHERE. I see signs EVERYWHERE for testing and when I drive by there are 0 cars in the lot. And when they are doing these tests, the positivity rate comes back as 2.5%. Only 2-3 out of 100 people who take the test even have coronavirus. You clearly have no idea what you’re talking about… Read more »

For masks to work 1) People need sterile technique training on how to use a mask. 2) Masks currently can’t filter the 75 nanometer Covid19 virus so we need enclosed breathing systems like we use for Ebola patients or paper masks need to be modified however due to CO2 buildup this is not going to happen anytime soon.

Hey Pigster, YOU are either totally ignorant or totally fake. Probably both.
1) Masks can’t keep out particles smaller than a gnat
2) Masks cause O2 levels to fall below OSHA requirements. OSHA!! Where are they in this calamity??
3) Masks are there to psychologically control, inhibit human communication, and cause a greater sense of acquiescence to this tyrannical trajectory
Just say NO!!

P.S. The “tests” are fake. Look this up. Only there to continue to whip up fear the politicos use for power.

For the paper disposable surgical masks to be effective they need to be changed frequently. As we should know when we breathe out we breathe out air C02 and moisture. While the amount of moisture is very small the masks will become damp and once this happens the mask is ineffective.

Not to mention “worn properly”…

I see so many people with their nose exposed, myself included when I’m forced to wear one…

I see them as a false sense of security….

Mask only the sick, then we’ll know who to avoid…

And yet no anti-body testing. Covid19 will go away once we reach herd immunity (which I believe is like a third of the population). Just like every other flu.

We are getting closer to the herd immunity as you stated…

What Flounder really means is “your compliance with my pseudo-science mandates turned the corner. All you need to do is what I tell you and don’t ask questions.”

Logical discussion around the use of masks left the station a long-time ago. Now they’re simply a sign of fealty/obedience to the state. That is how the left sees it.

You want to wear a mask, wear one. It should not ever be mandatory. There are plenty of reasonable objections to wearing one.

Funny, us “free face” advocates do not judge those who feel the need to wear a mask, or deride them…

We however, are condemned for the desire to make our own decision on the matter…

The man with the 85-pound face is a pathetic joke on a delusional ego-trip. Take away his inherited cash and he’d be selling balloons in Lincoln Park. All he’s missing is a guy with a tuba following him everywhere.

July 12, 2020
The sanctity of contracts shoe apparently fits depending on who is wearing it. It fits public workers but not those randomly forced to provide free housing.
View Comments (15) | Add Comment