Remember April 21, the day Governor JB Pritzker “moved the goal post,” as we put it then, about COVID-19?

Pritzker had been saying that the virus would have peaked by then, and models he said he had been relying on had said so. So he announced new science and data indicating a later peak in mid-May.

Well, the virus peaked before even that announcement. Pritzker pushed out a goal post that had already been passed. His new science was wrong from the start.

On April 21, when he extended the estimated peak to mid-May, he also announced he would be making changes to his stay-at-home order, which was about to expire at the end of that month, and he was setting the groundwork for his highly controversial reopening plan. And on April 23 he introduced some of the experts who described the new projections he was relying on and defend the new science.

The evidence of the day-to-day course of the virus closest to being timely is hospitalizations for it, as Pritzker himself has said. They peaked on April 28 and dropped ever since, as you can see on the chart below. (Full data are here.)

But even those numbers lag the true course of the virus by about 13 days, according to Center for Disease Control numbers.* That indicates the virus peaked about April 15 — well before Pritzker even announced that it would peak later. 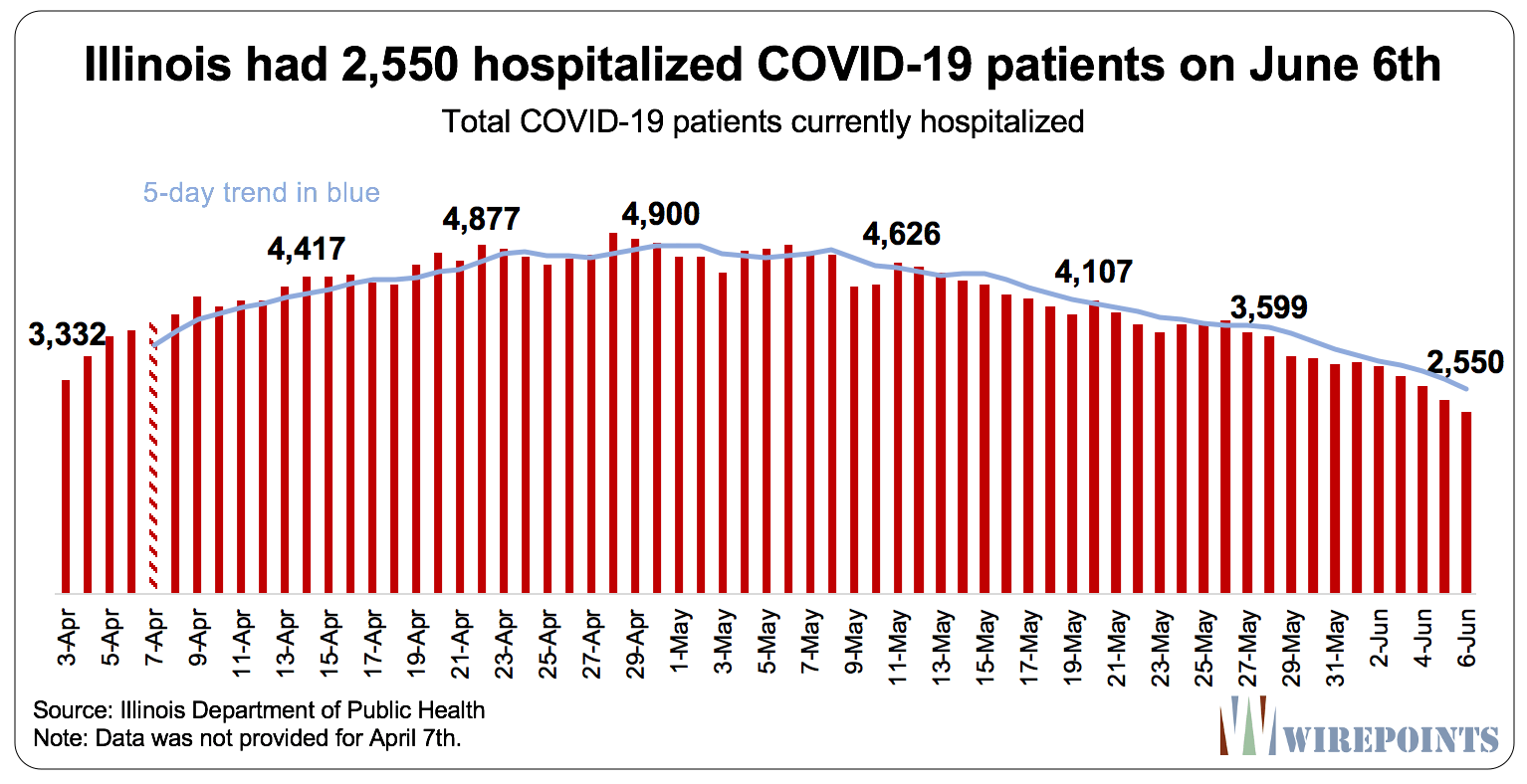 The most important number – deaths – indicate the same thing.

Deaths peaked in Illinois on May 9, but they are a very lagging indicator. They get reported about three three weeks after the date of infection, and probably longer, on average.** Subtract those three weeks and you get to April 18, which is also before Pritzker announced he was moving the goal post out further. Death numbers vary heavily from day-to-day, so we show below a five-day moving average: 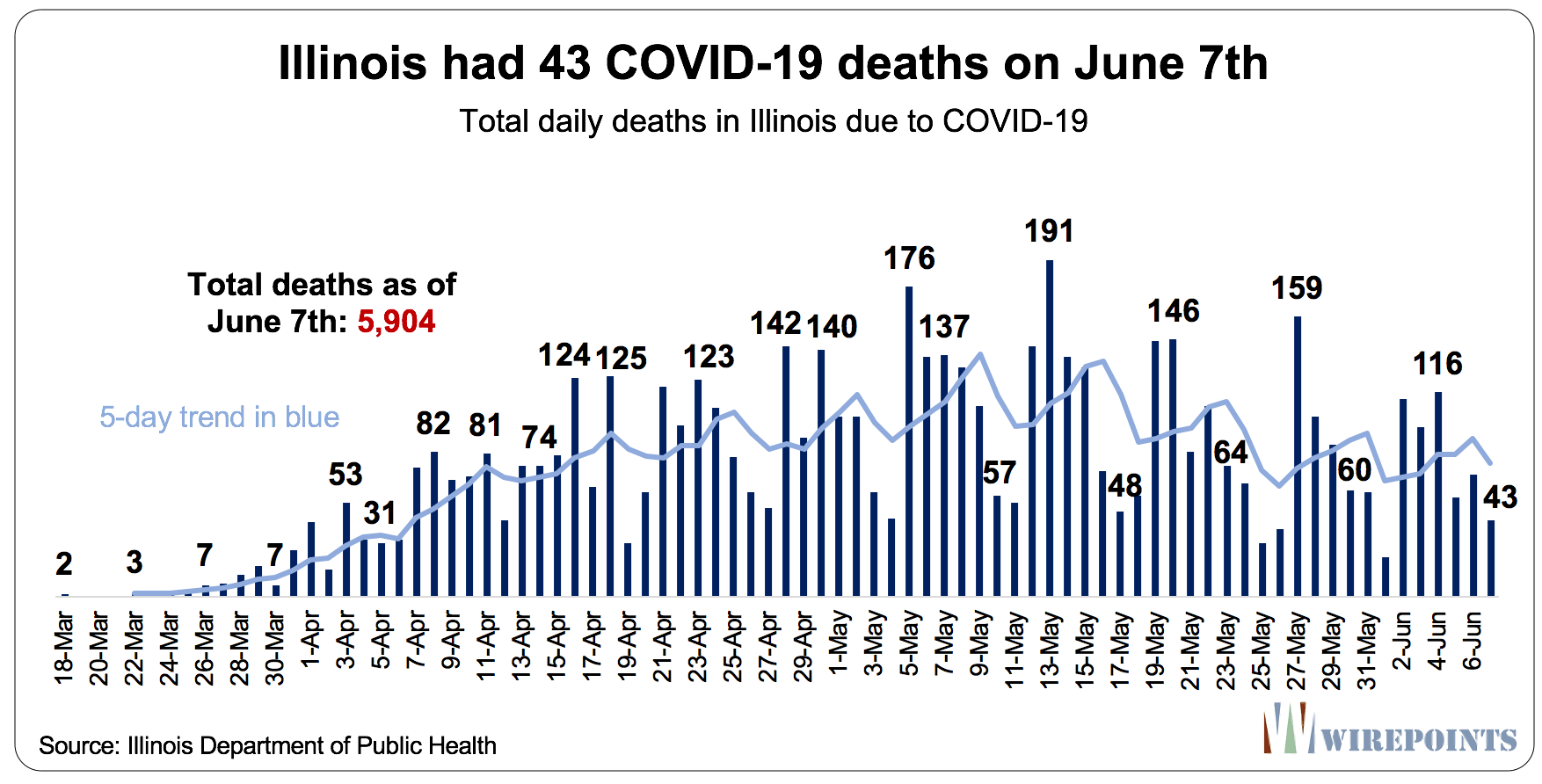 The bottom line is clear: Pritzker’s new science was wrong even before he announced it. And that was just when Pritzker needed to build up his case for extending his stay-at-home order and his reopening plan, which has been rated the harshest in the nation, a plan that makes no sense on its face.

We recognize that all projections on this topic have large margins of error and that new things are learned about the virus each day, so we are more than willing to cut plenty of slack to projections that turned out wrong.

However, because this error is so large and was so immediate, it is yet another indication to be added to others that Pritzker’s science and data have been unsound, and they certainly have not been as objectively certain as he constantly claims. That science and data, on which is his still relying, proved to be wrong before he even announced it, raising further doubts about whether he has distorted the crisis for political reasons.

We questioned his science and data from the start, and the links are below. Back in March, the state wasn’t even collecting critical hospitalization data, and only started when criticized. He failed to properly characterize virus as a serious threat only to at-risk groups, which are basically the older population (86% of Illinois coronavirus deaths are over age 50 and 92% of Cook County victims had comorbidities) and those in retirement facilities (about half of Illinois’ deaths). He changed his rationale for his emergency order from bending the curve and avoiding hospital overload to irrational goals that may be impossible ever to meet. To this day, he has stonewalled antibody testing data that tend to show lower infection death rates, which other states use to inform policy. He yet to provide that true infection fatality rate. His press conferences were stage-managed to avoid any chance of being seriously questioned.

None of this should be taken to imply, however, that COVID-19 shouldn’t be taken very seriously by those who are older or have known comorbidities. Six thousand Illinoisans have died from it, the threat is severe for at-risk groups and the virus could well surge again. 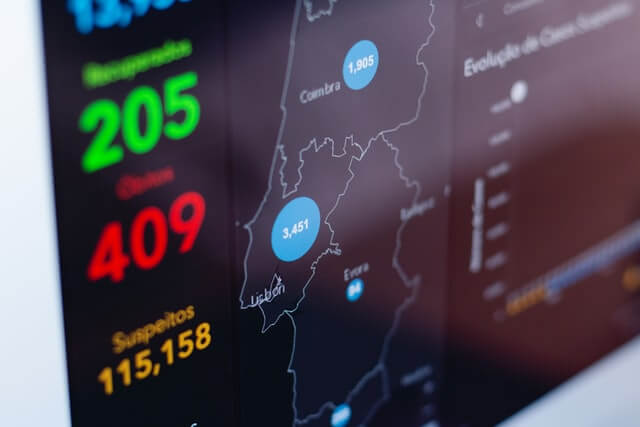 But this should indeed be about science and data, as Pritzker says, and we don’t trust his.

There’s still no cures for flu and colds. Evolution and Relativity are still theories. ☹️

Amen on all points

The thing is a lot of people believe him and will go to the polls to vote for his tax increase believing him once again. We are in Illinois where people like him get elected.

9
MikeH
Reply to  Governor of Alderaan

Time for Pritzker to fess up how much his family has made off the Covid19 testing with his ownership of Pathgroup and Cure Health, among other ‘investments’. A source involved with testing said Pritzker gets $50/ test. You do the math on this brazen conflict of interest!

This is a great case for universal healthcare. Capitalism continues to hurt our people rather than lift them up

-2
The Truth Hurts
Reply to  Pony

Capitalism has provided the poor in the US with a higher standard of living compared to the average income citizen of other developed countries. If the poorest 20% of Americans were to form their own nation they would be considered one of the richest countries in the world.   Also the poor already have health care, it’s called medicaid. Most people aren’t poor because of capitalism. They are poor because of the decisions they make such as children out of wedlock and not earning an education. Even when these people make poor decisions America has their back by providing an… Read more »

2
debtsor
Reply to  The Truth Hurts

Pony can ride his ass (in the donkey sense) down to Venezuela & Cuba and check out socialism. I mean, yes, the socialists won, and they were happy, but in the end, everyone really lost.

We know minorities are hurt worst by Dictator for Life Jabba’s cruel shutdown. Clearly this was by design

Shhhh! Don’t let the cat out of the bag on the libtards!

There was never any science and data–it was lies and falsehoods to control.

The hatred they have with the President is beyond me! To the extent that Pritzker DO NOT CARE ABOUT THE CITIZENS that have been hurt financially… Just like other Democrats, they want to continue in their lies and disgusting rants… drag the country to misery just to fit their agenda! “Real Americans” hear yah!!! This time, more and more voters rally around the President! HE WILL WIN! And pls don’t cry because you… all LIB-TARDS WILL SEE AND FEEL THE WIN!!!

Pritzker is clueless! He doesn’t get most of this because Money was never an issue for him.

Why bother debating his “science and data”? , It should have been apparent months ago , Gov Pritzker does all his actions becuase of a hatred of Donald Trump, common citizens, and Christians to make the situtation as bad as possible , thinking it will affect the outcome of the next presidential election, not becuase of science and “data”. JB is a very powerful Democratic party operative, a regular “King maker” and Illinois is “center-mass” for the Democratic Party of America, has been for a long time. Both Obama and HRC are examples of this.   All of Priztker’s sciene… Read more »

However, because this error is so large and was so immediate, it is yet another indication to be added to others that Pritzker’s science and data have been unsound, and they certainly have not been as objectively certain [[has] _as_ he constantly claims.

He _has_ yet to provide that[[,]] true infection fatality rate.

It was all about national Democrat politics – workers and business owners in Illinois were no more than pawns in a political game, their livelihoods of no real importance. Pritzker has complete contempt for the people of Illinois.

Meanwhile, public employees continue to live in an alternate universe from the rest of us – their universe feels no pain at all from Pritzkers mismanagement and political games.

13
Bob Out of Here
Reply to  UnclePugsly

I told people at work the other day that on November 4th (day after election) the clouds will part, the sun will pop out, angels will sing and the pandemic will be announced as being over. This isn’t a pandemic, it’s a scamdemic. It’s all to screw Trump over. Keep JB’s presidential aspirations for 2024 in mind. Prolly have Madigan as VP.

I’m afraid that on November 4th all hell will break loose if President Trump is elected as the losers will go for the kill.

If the “not guilty” verdict on the (intentionally) overcharged officers doesn’t first.

1
Bob Out of Here
Reply to  Cpt Crunch

I so hope he does, just so we can see Alec Baldwin’s face.

Many sensible people will return to work and spend weekends at the hardware store rather than on the streets. Many liberal colleges will be forced to close and lay-off administrators and faculty. If insurrection continues then Trump will call out the army and the police will join them. It will be neither pleasant nor pretty but that’s the usual trajectory in this sort of affair. Consider Thailand a couple years ago. Antifa’s a bunch of bullies but they couldn’t organize a gang bang at Wellesley. The well armed and trained head bangers will prevail. Sure there’s the possibility of a… Read more »

1
Riverbender
Reply to  Bob Out of Here

Reminds me of the old joke
A cop came up to a drunk sitting on the curb outside of a tavern and asked”what are you doing sitting there?”
The drunk replied “I am chasing away elephants.”
The cop then said “there aren’t any elephants around here.”
The drunk retorted “yep, see what a good job I am doing.”

Next up Pritzker pats himself on the back for saving all of our lives by his actions…a tried and true path of action and deception by politicians.

Stop… You mean JB, our savior, was full of it?   Mark, the issue is not that JB is exactly what we expected, but that our elected pols, our judicial system, our state congress, and our JOURNALISTS failed to stand up and speak truth to his lunacy. That they were derelict in their duty… That the Mayor of Chicago is a sycophant or a goof… In the presence of a crisis, swift and strong action was necessary – we were slow to the party (lockdown happened on Sunday morning, after all of the St. Patrick’s Day gatherings), but once the… Read more »